Today marks six months since I bid Toronto farewell and agreed to call Korea home for a year.

I still remember arriving in the wee hours of the morning, being greeted by a driver who had spent hours waiting for me after I got delayed in Tokyo, staring in awe at the bright neon lights that dotted the streets, and then being dropped off at a little love motel in a sketchy part of town with nothing more than a piece of paper that said “Hi, my name is Bob. I will pick you up on Monday.”

What have I gotten myself into?

The past six months have turned out a lot better than I expected; no midnight run for me! So let’s take a look at what I’ve been up to:

Samcheok to visit one of the largest cave networks in Asia, Daejeon for foot spas and food, Cheonan for Buddha and cakes, Busan for fish markets and beaches, Boryeong for the mud festival, Gwangju for the May 18 Memorial, and Boseong for green tea fields and green tea ice cream.

I have travelled on the KTX, and I can now say that I prefer the Mugunghwa even if it takes four times longer to reach my destination. I like slow train rides that weave their way through the countryside.

Number of meals I won’t be repeating: 2

Dry squid which is served at bars and happens to be chewier than rubber, and grilled eel – enough said.

Number of times I’ve been locked out of my apartment: 1

This one of a scandalous foreigner shaking her thang at a noraebang (wait, no, not me!), and one of pantless farmers…

The Lotus Lantern Festival and the Boryeong Mud Festival.

Number of times I’ve had fish guts spilled one my feet: 1

At the Jagalchi fish market in Busan – also the place to find the infamous sea penises. 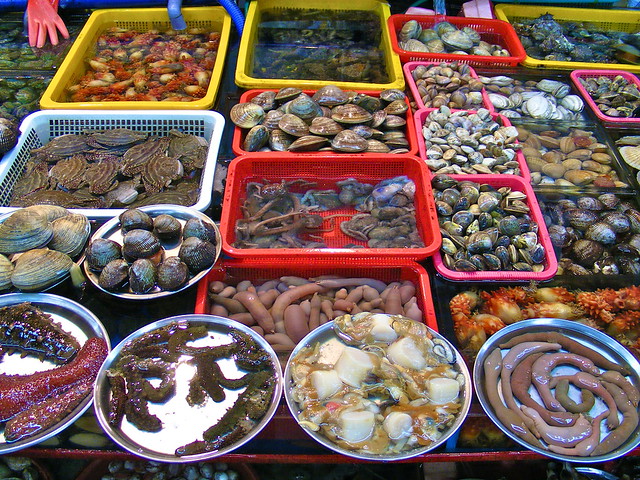 Number of times my students have made completely inappropriate yet hilarious remarks: Lost count…

But here is a sampling of the things they say of a daily basis.

Number of complaints I’ve received from my building: 1

Apparently disposing of furniture without the appropriate tags is not cool. They will put up flyers in the elevator urging you to come clean and threaten to scan CCTV footage to find the culprit.

Number of travel bloggers I’ve met who are based in Korea or passing through: 10+

Ahem, can I just say that Sam was the first travel blogger I met in Korea and now he happens to be my hunky travel partner in crime. I’d say that turned out well!

There you have it – six months down and there are six more to go! I am looking forward to autumn in Seoul, celebrating Halloween with my students, more weekend trips around the country, trying new foods, celebrating the holidays in a foreign land, and enjoying the snow from the comfort of my cozy little apartment. I hope you’ll follow in the rest of the adventures!