I have spent many weekends in Seoul gawking at palaces, strolling down back alleys, weaving my way through some of the busiest markets in the whole country, and occasionally getting pushed and shoved by ajummas a foot and a half shorter than me; but this whole time I have not done a proper post showing you what I consider to be ‘the real Seoul’. What better way to do so than through a photo essay (and my very first). So let’s take a stroll around town: 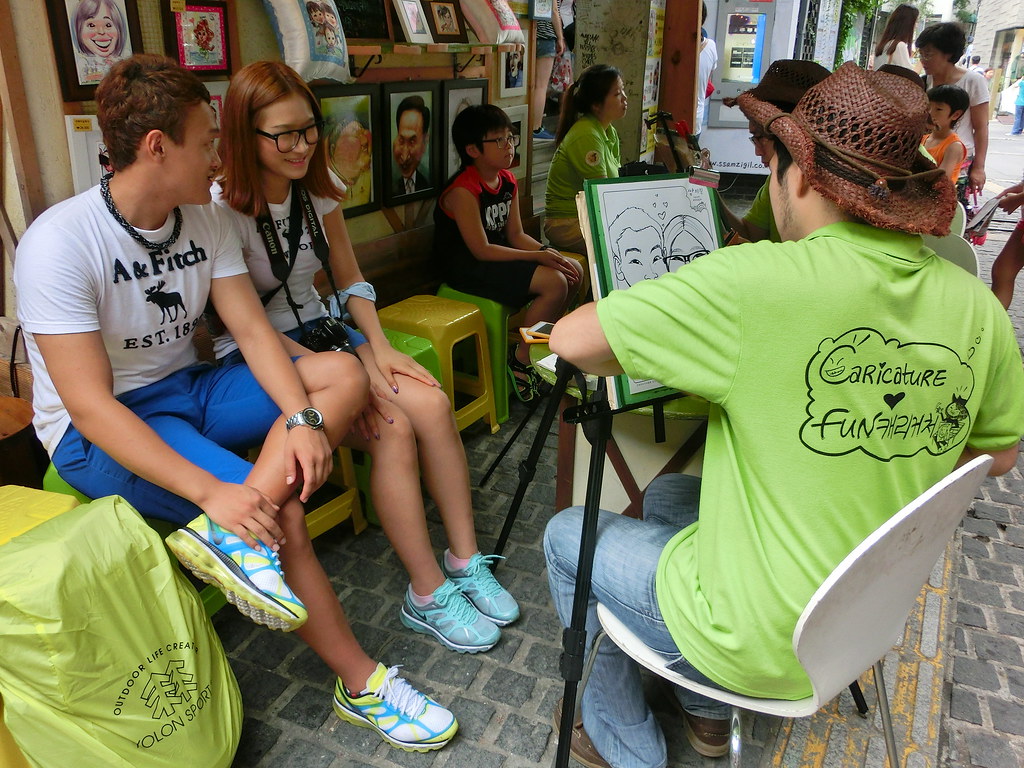 A young couple in matching Abercrombie & Fitch t-shirts pose together as an artist draws their caricature. 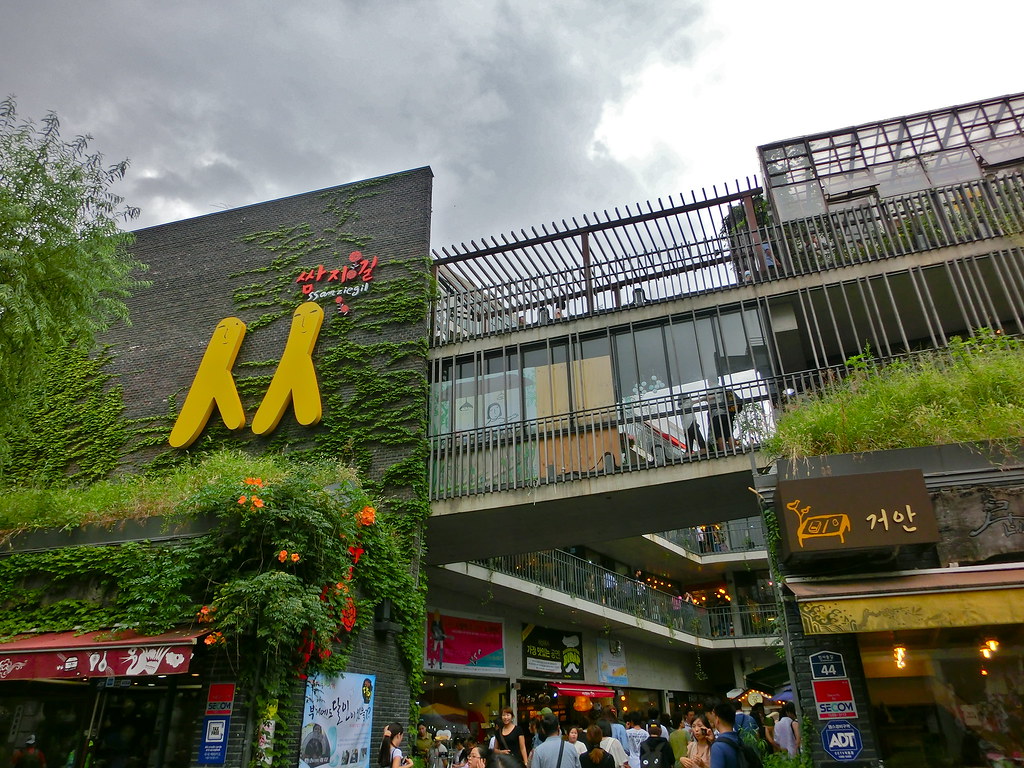 Ssamziegil (쌈지길) is a shopping and arts complex located in the middle of Insadong. Inside you can find little boutiques selling hand-crafted goods, stands luring you with waffles and sweet pastries, and a few smaller but enticing restaurants on the rooftop. Ssamziegil has ramps that spiral all the way up, and staircases that are covered in graffiti. The complex is a nice place to rest your weary feet and enjoy a little snack after having explored this artsy neighbourhood. 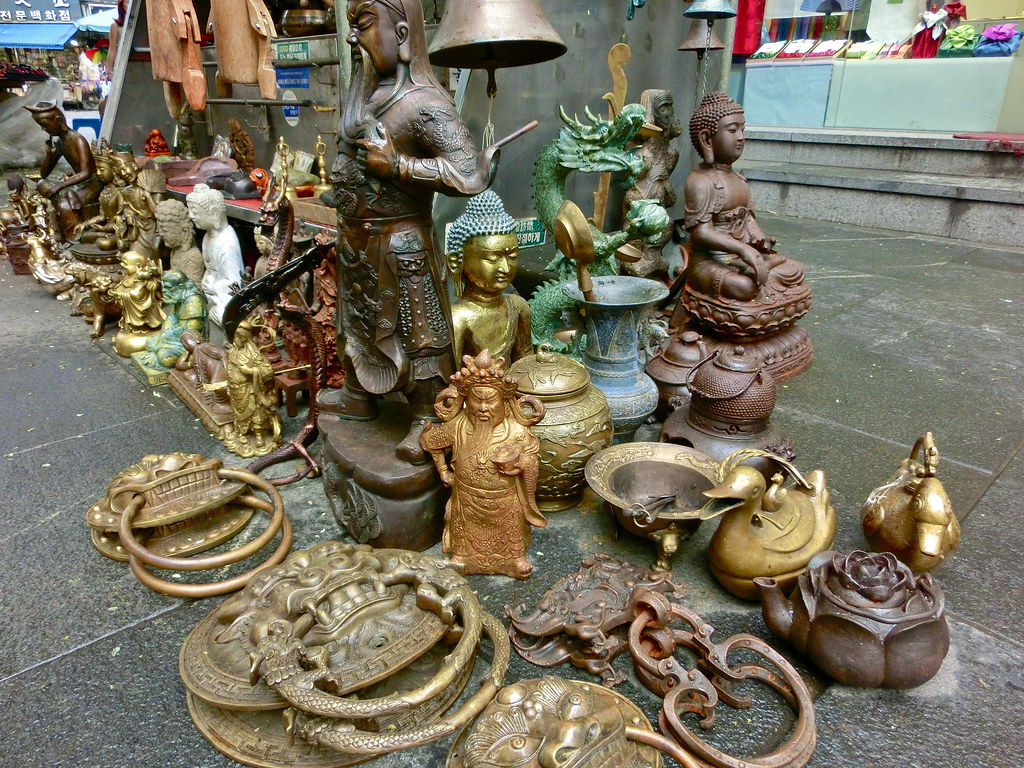 Sculptures of dragons, warriors, and Buddhas sit on the main strip of Insadong. 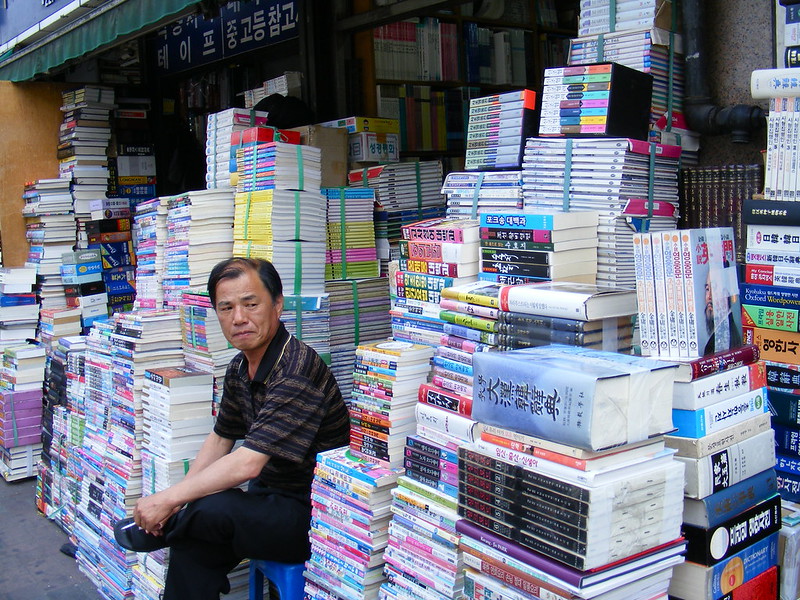 A shopkeeper sits outside his store in Dongdaemun surrounded by thousands of books. This large market is located by the city’s East Gate, and boasts shopping malls, underground stores, and outdoor stalls. 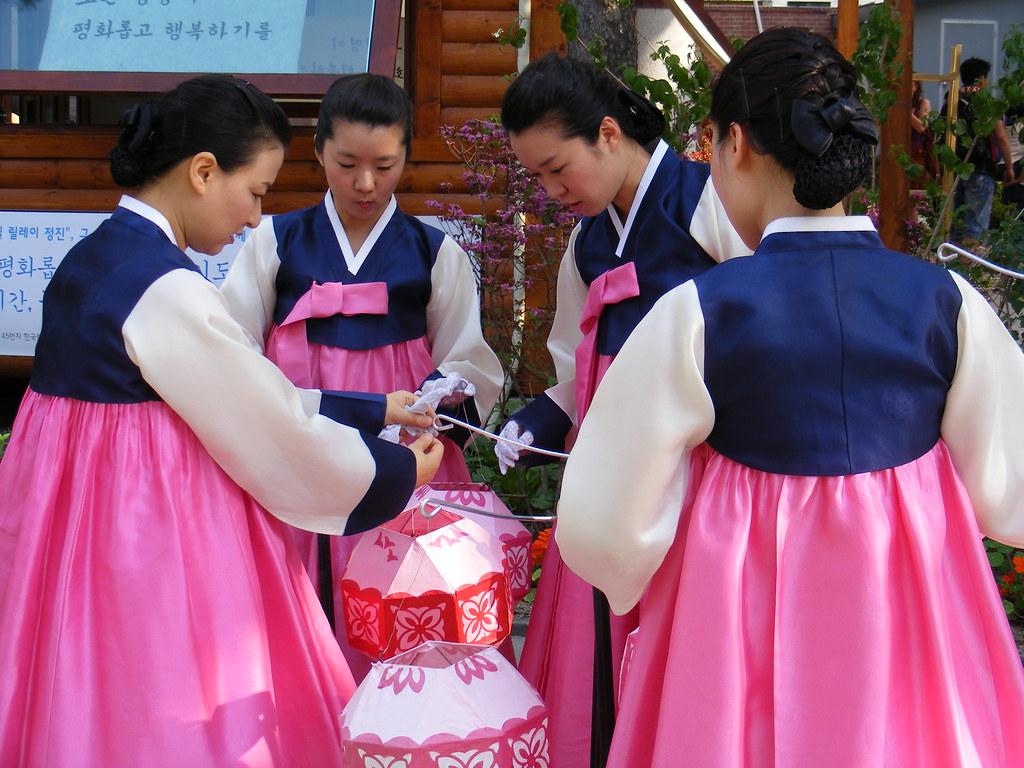 These young women dressed in hanbok, traditional Korean dresses, get ready to take part in the annual Lotus Lantern Festival which takes place in May to celebrate Buddha’s birthday. 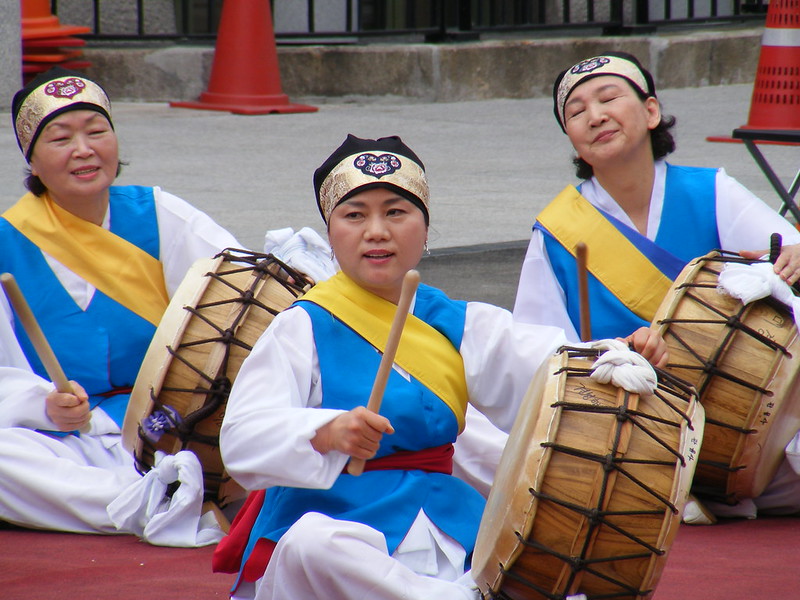 A traditional drumming performance takes place in the city. If you ask me, the woman in the far right is really feeling the music. 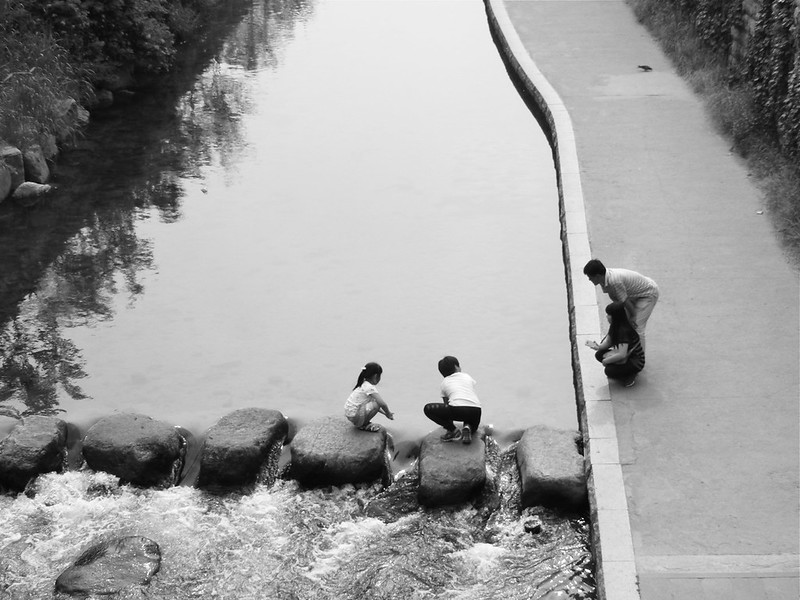 Children play on the Cheonggyecheon on a hot summer day while their parents stand along the banks. The Cheonggyecheon is a long stream that runs through the heart of Seoul, and draws crowds of children when the summer temperatures begin to rise. Some even jump in fully clothed! 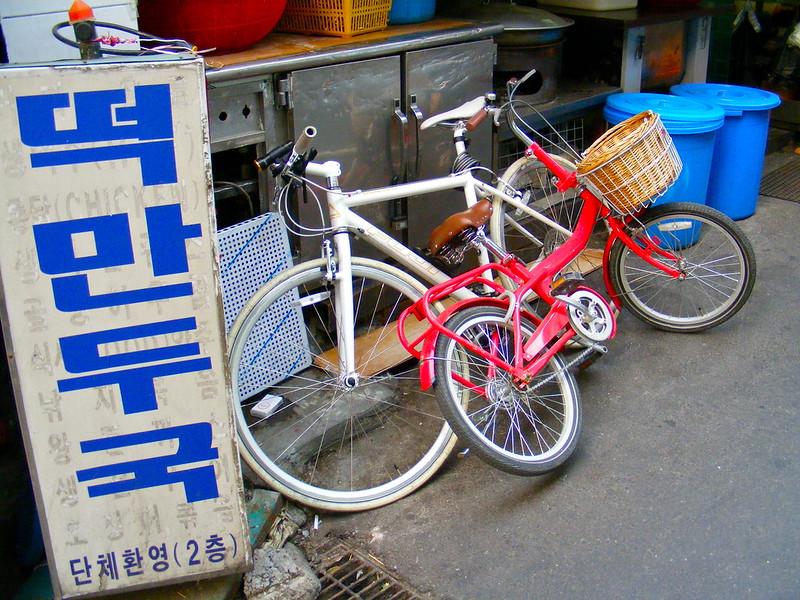 Two bicycles lie forgotten in a back alley in the east end of the city. 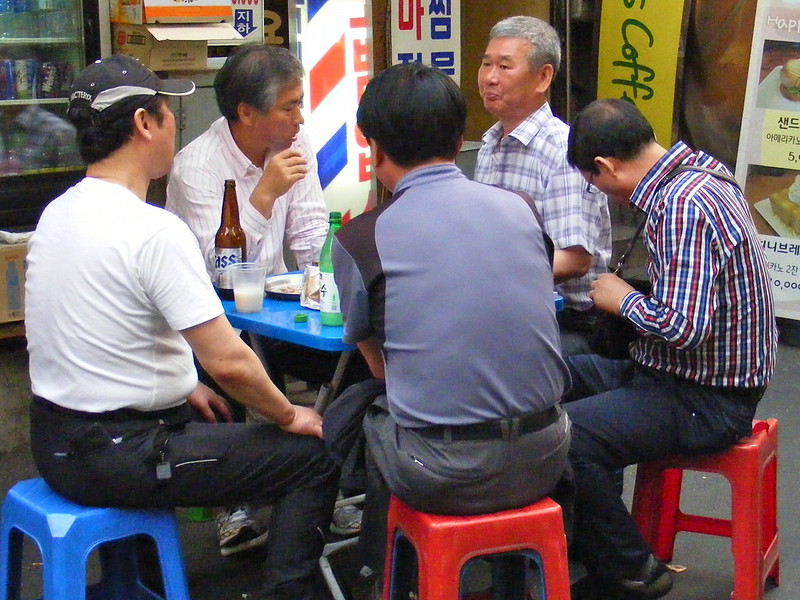 A group of men sit outdoors enjoying their beer, soju, and a few light snacks on a summer afternoon. 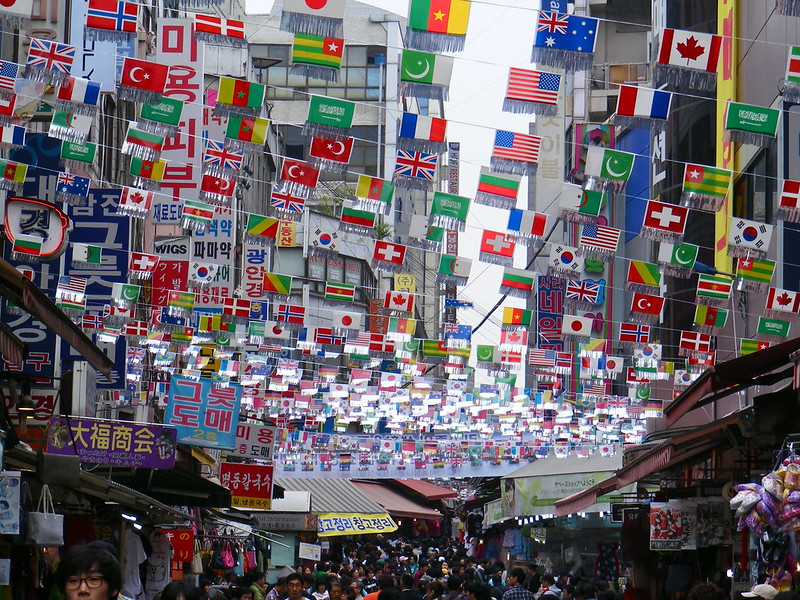 Flags from around the world hang over Namdaemun Market. Namdaemun is a traditional market located by the city’s South Gate. It is a place where you can buy anything from pimpin’ fur coats and tacky lingerie, to traditional Korean dresses and street food. This happens to be the oldest and largest outdoor market in all of Korea, and dates back to 1414. 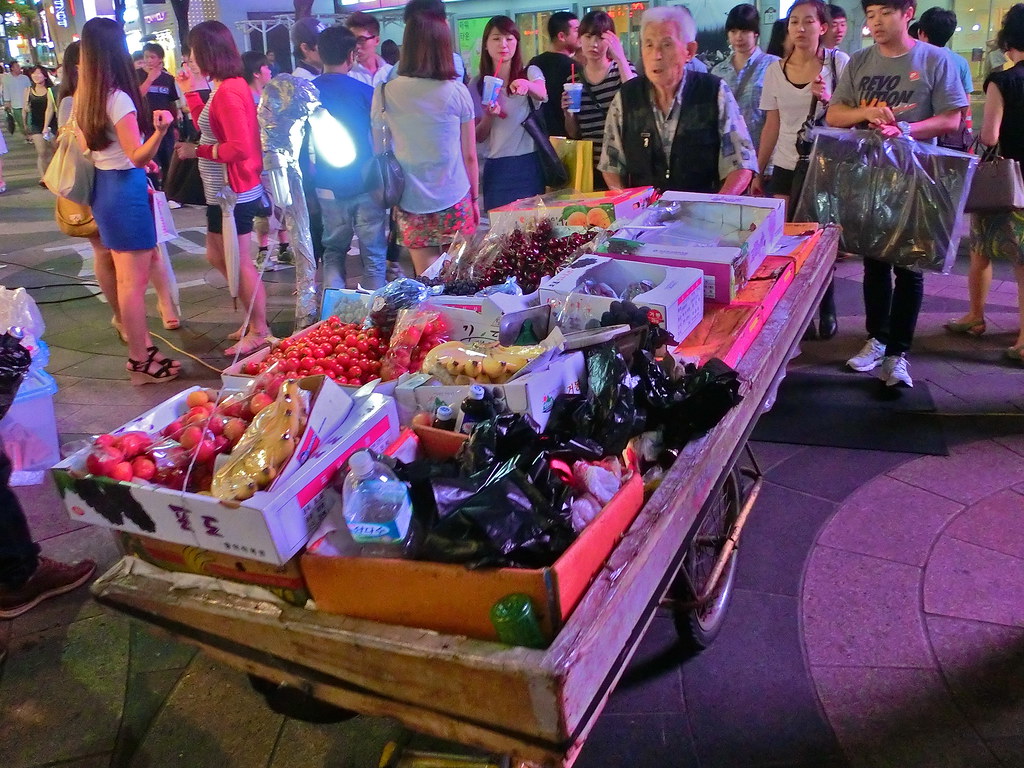 A man pushes a cart with fresh produce through Myeongdong’s main strip at night. Myeongdong is one of the city’s main shopping districts and is always abuzz with activity no matter what time of day. It features mid to high end retail stores, but as you can see, it is also possible to purchase items from the stands and moving carts that are also found in the area. 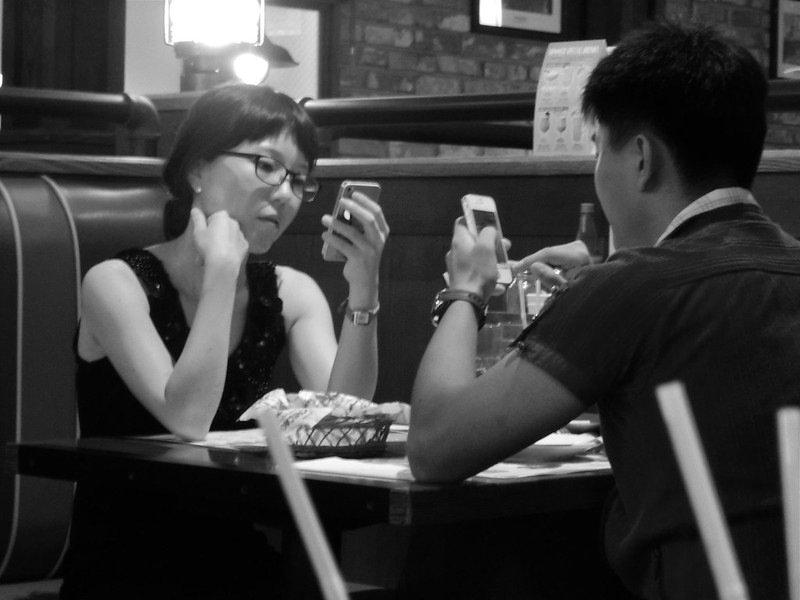 A couple enjoys a romantic moment at a restaurant – cellphones in hand. 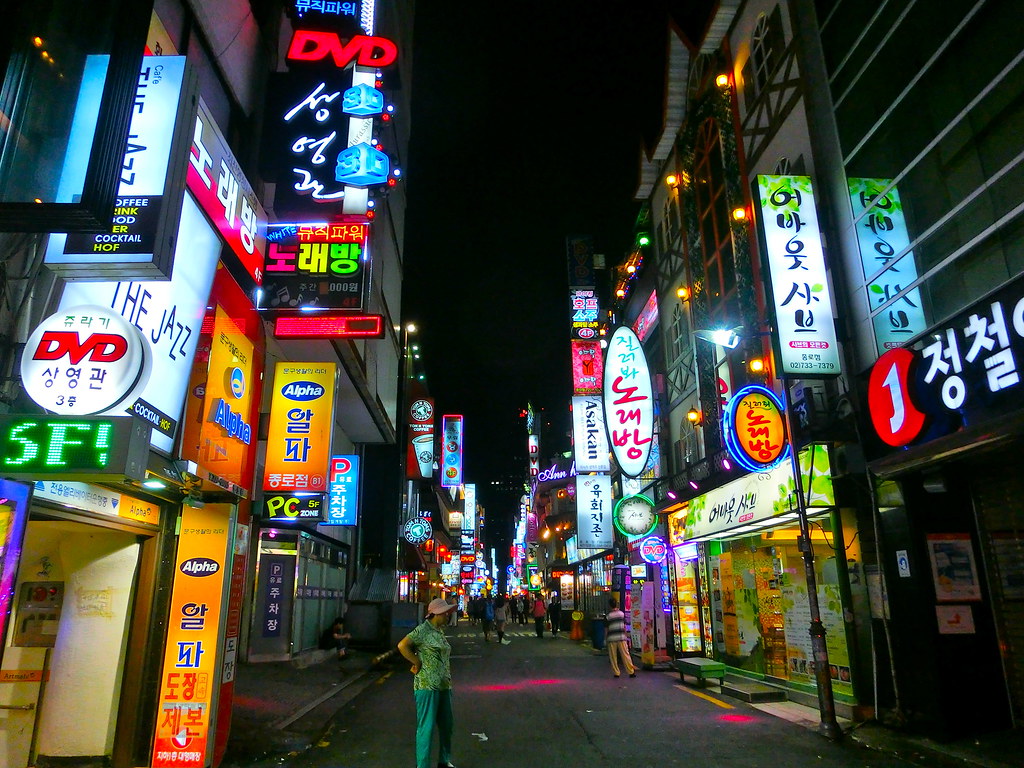 Bright neon lights line one of the side streets around Seoul’s Jongno neighbourhood.

Seoul can oftentimes be overlooked by travellers in Asia since tropical beaches, mountain paradises, and mega cities like Tokyo, Bangkok, and Hong Kong sound far more alluring. Truth is, I doubt I would have ever made it to Seoul had I not taken a job in Korea, but now that I have gotten to know the city, I have grown quite fond of it. It has grand palaces, Buddhist temples, markets galore, noraebang where you’ll find yourself singing the night away, the most appetizing of traditional dishes, and enough bright lights to give you that big city feel. That’s the Seoul I have come to know.