I know, I can hardly believe it, but it’s already been over a month since I strapped on that backpack. Yes, I’ve been sweating for a solid five weeks now, and I’ve also learned a thing or two about travel while carrying a weighty load on my back.

Here are a few lessons learned from the past few weeks of travel: 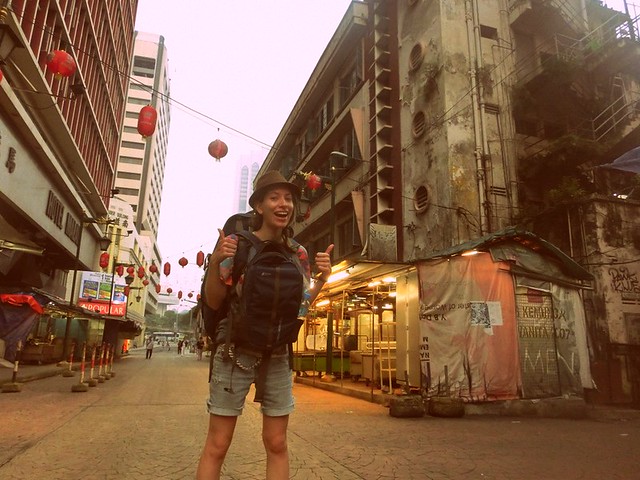 I thought I knew how to pack light; apparently, I don’t. Before we even left South Korea, Sam and I had a packing showdown. He thought I was taking too many things, I thought 5 pairs of shoes (cute leather sandals, ballerina flats, canvas shoes, running shoes, flip flops), nail polish, perfume, half a dozen dresses, and my new powder blue blazer would be absolute necessities. Gotta be prepared for whatever situation presents itself, right?! He was right, I was wrong. I repacked my suitcase twice before leaving because I couldn’t physically lift my pack, and then I had a change of heart about two weeks into the trip and got rid of even more stuff I didn’t need. My backpack is now at 10 kilograms, and I could probably still lose another 2 kg for it to feel comfortable enough to carry. Learning how to pack light is an art!

Don’t drink anything that’s not bottled water. – Stay away from the ice cubes. – Use a straw when drinking out of a can. I have not followed any of the above, and I have been totally fine. No rumbling of the tummy, no unexpected mad dashes to the nearest toilet, nothing! I’ve been drinking fruit shakes, mango lassis, sweet limes, and even Malaysian desserts made with shaved ice; I either have a stomach of steel, or it’s actually pretty safe to consume beverages here – I’m leaning towards the latter.

You know what’s worse than getting the back seat on the bus next to the toilet? Getting the back seat next to the toilet, which sits on top of the old engine, which blows hot air on you, which also happens to be where the AC doesn’t reach. Now imagine sitting there for 7 hours, in your own sweat, drinking a bottle of warm water (because nothing stays cool in the back of the bus). Chyeah, roadtrip! Not. Easily solved by not booking your ticket with only a few hours to spare.

Whoa, look at that cute macaque scurrying across the wires! Aww, look at that little cat crawling in the gutter! Wrong and wrong! That was a rat – a really big, fat rat. Oh, and that furry creature that’s causing all the commotion in the restaurant – yes, the one the four men are chasing with a broom – yeah, that’s another rat, and we’re still going to eat there.

5. You don’t need to carry around a sleeping bag or a towel.

During my early backpacking days in Europe, I used to always carry around a sleeping bag and a towel; it took up half the space in my luggage. Times have obviously changed. Now that I’m travelling through SE Asia, I find that most hostels and guesthouses provide you with linens and towels, and the odd place that doesn’t offer those free of charge, usually gives you the option of renting them for a small fee. Not that you’ll even need linens in this sweltering heat…

6. Have passport sized photos on you.

Many countries in SE Asia offer a tourist visa on arrival. Get off the plane, fill out the form, attach a photo – oh, wait! You don’t have a photo on you? That’ll be an extra two dollars to get your visa. What? It doesn’t sound like a lot, but if you’re planning on covering several countries along the Banana Pancake Trail, it might be worth getting a few passport-sized photos and keeping them handy. You’ll also need them if you decide to sign up for lengthy treks around the region.

7. Trade paperbacks for a Kindle.

I cannot believe I am saying this, as I am pretty much the poster girl for real feel-the-pages-between-your-fingers books. (I even have a pretty extensive book collection at home that is currently packed up in loads of boxes!) Before I set out on this trip, I bought 4 books that I was planning to carry around with me…well, when I realized just how heavy my pack actually was, it was time to ditch the paperbacks and dare I say, catch up with the times. I have not looked back! Sure, it’s still nice to keep a little library at home, but when you’re lugging your belongings around from one country to the next, the Kindle is boss.

8. Popsicles are your best friend.

I go to 7 Eleven daily. Actually, I go there several times a day. What is it that lures me there? Two things: (1) the cold AC that makes it feel like you’re in Siberia, even if for just a few brief moments, and (2) popsicles! That’s how I like to cool down.

Oh, I’m just going out to dinner. I won’t need it…and that’s when you do. Now how am I supposed to get that photo of those six men riding on top of the pickup truck’s cabin?! Oh wait, that’s a daily occurrence…but you could miss out on other things!

What lessons has travel taught you?