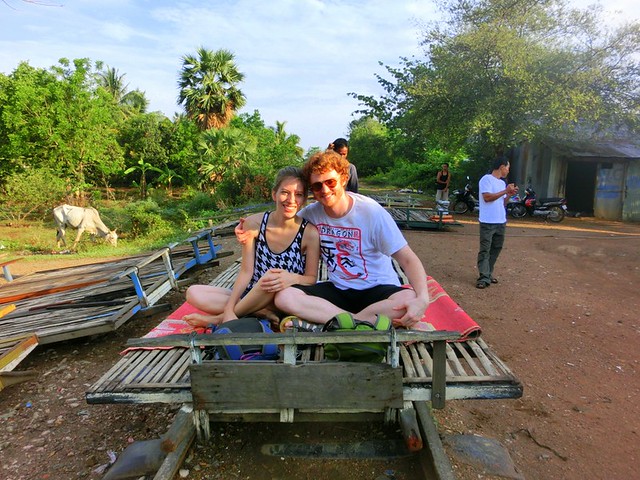 Battambang isn’t the most popular destination for travellers passing through Cambodia, but those who do make it to the northwestern part of the country know about the notorious bamboo train.

Located in the outskirts of town, the bamboo train, or nori, is essentially a bamboo flatbed on wheels, which is powered by a small motorcycle or tractor engine.

The rail line stretches all the way down to the capital of Phnom Penh, but the tracks lie in complete abandon and disrepair, meaning the bamboo ride only runs 7 kilometers in length to a nearby village and back.

The bamboo train was the first stop along our tuk-tuk tour of the Cambodian countryside. As we reached the start of the line our tuk-tuk driver Mr. Bay snapped a photo for us saying, “the train won’t be around much longer.” I smiled because I had read the same thing in my guidebook…which is three years out of date.

The government has plans to rebuild the rail lines all the way to the Thai border in the northeastern part of the country, and all the way south to the beach town of Sihanoukville. That being said, this project was aimed to be completed several years ago, and that is still in the works, so maybe there is no rush after all…

We we paid our $10, hopped on the makeshift train, and waved Mr. Bay goodbye as we pulled away.

Sitting on straw mats than has been laid over the bamboo platform, I held onto whatever I could and the contraption quickly began to pick up speed. (This thing can go up to 40 kilometers an hour!) I peeked down through the cracks at the rail tracks below, but it was all a blur of colour and sound. I had to yell to be heard, but even then the wind carried half of my words away. 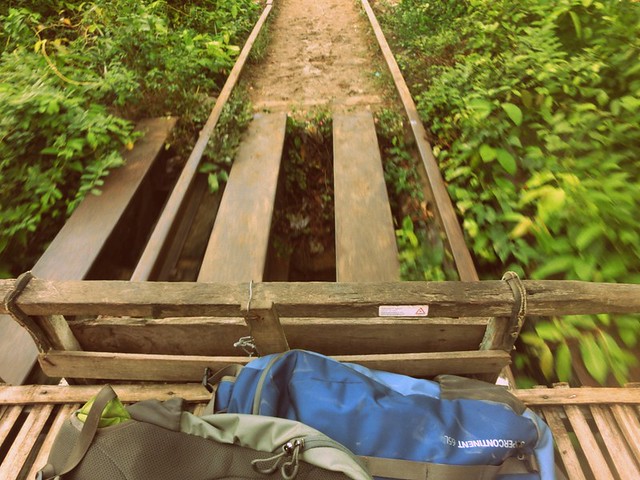 With the wind blowing in my hair, and the speed plastering a smile on my face, we chugged past fields, across rickety bridges, and through stretches of bush. Locals walked on the tracks and only hopped off when the train was almost upon them.

When we finished the first stretch of the journey and reached the village, I couldn’t wait to do it all over again! 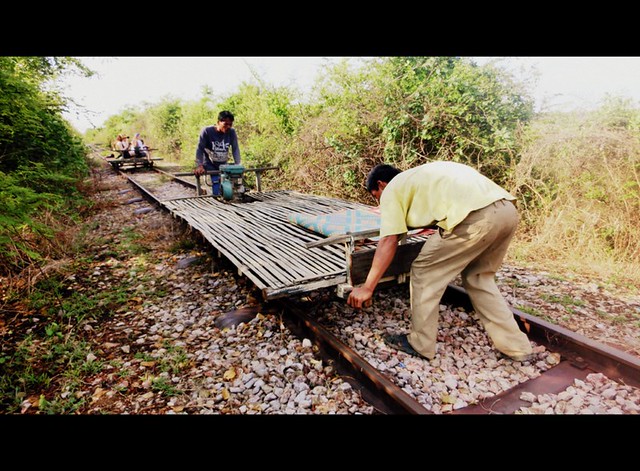 But at the end of the line things turned sour…

When we reached the village that lies at the end of the tracks, the atmosphere changed. Our driver quickly disappeared before we even had a chance to look over our shoulders. 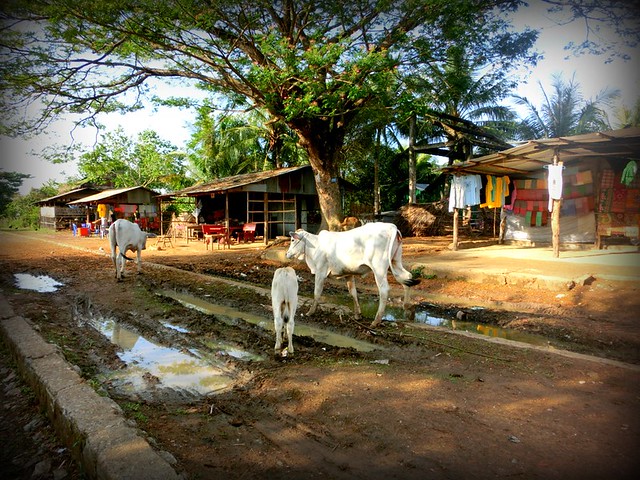 A girl approached us and told us that the train would be making a mandatory 10 minute stop here. That’s fine, we thought. Maybe our driver wanted to grab a quick breakfast or have a restroom break…

We decided to have a wander through town, but that’s when the hassling started.

“You have to sit here. Wait here, buy drink. Drink is one dollar. You buy drink.”

Seeing as we had just eaten breakfast and were carrying around a 2L bottle of water with us, we didn’t feel the need to buy a warm can of coke or beer, but the pleading continued. I thought of maybe purchasing a souvenir so that I could contribute something, but the only thing that caught my eye were scarves, and I’ve already accumulated seven of those travelling through Cambodia. I came to the conclusion that certainly a $10 fee for a ride that lasts 15 minutes each way was a fair price and a good enough contribution to the local economy. (That’s way more than what it costs to travel from Battambang to Phnom Penh and that trip lasts 6-7 hours!)

After a brief stroll along the tracks, we returned back to our bamboo train to continue waiting for our driver who still hadn’t returned.

No other trains had arrived yet, and we were the only ones there. I felt like we were being kept here until we purchased something, and I didn’t like the pressure they were putting on us as visitors.

Just as we were debating going in search of our driver, he reappeared. 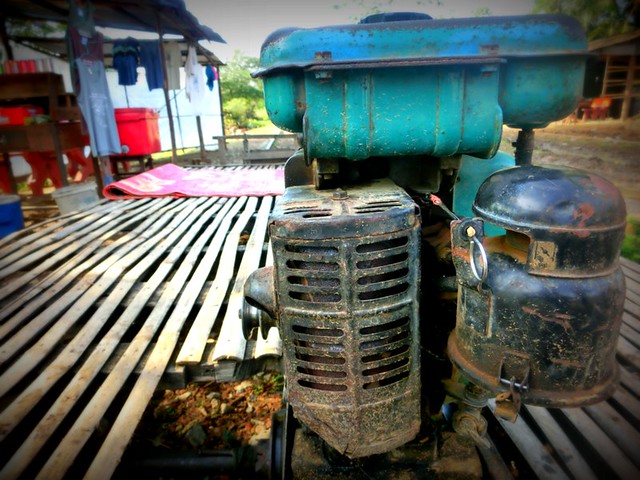 He started turning the bamboo train around, and while he was doing so, another woman approached us. “Where are you from?” she asked, and as soon as we had replied, her next words were “you have to tip your driver.”

We explained to her that we had already paid our driver at the start of the line, but the woman insisted that we needed to tip our driver and she would not go away. The demands were getting outright bold, and frustration was mounting on our side.

Why were we being made to feel guilty?

We hopped back on the bamboo train, and as elated as I had been on the way over, I couldn’t enjoy the ride back. All I could think of was the confrontation that might take place once we reached the other side.

When we finally arrived at start of the line, we hopped off the train, saw our tuk-tuk driver Mr. Bay, and went straight towards him. 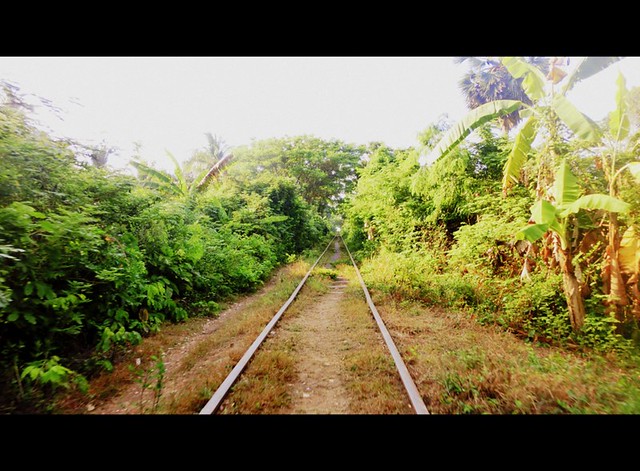 We didn’t look back.

I know how horrible that sounds. It’s not how I wanted to end things, and I hate that our bamboo train driver probably has the impression that we are spoiled foreigners who refused to tip him, but at the same time I don’t think it’s right to guilt visitors into giving you money, especially after you’ve been treated so poorly.

A tip is meant to be a reward for good services, and in this case it would have been rewarding bad behaviour.

Can I recommend the bamboo train?

Hopefully this story will help you decide.

Have you been on the bamboo train?

What would you have done in this situation?