This past week I signed up to do something I’ve never done before – take a cooking class!

I like to think that I’m a decent cook, but the truth is I’m really just a great eater. I like to eat. A lot.

Breakfast and second breakfast, mid-morning snack followed by an early lunch, then it’s time for a mid-afternoon snack usually followed with an early dinner and then some more snacking…

Which brings us to ‘Nary Kitchen’!

‘Nary Kitchen’ is a little restaurant and cooking school run by Nary, a seasoned chef, and her husband, Toot. The schools is located in the heart of Battambang, and together, the sweet couple make a great team that churns out some amazing recipes! 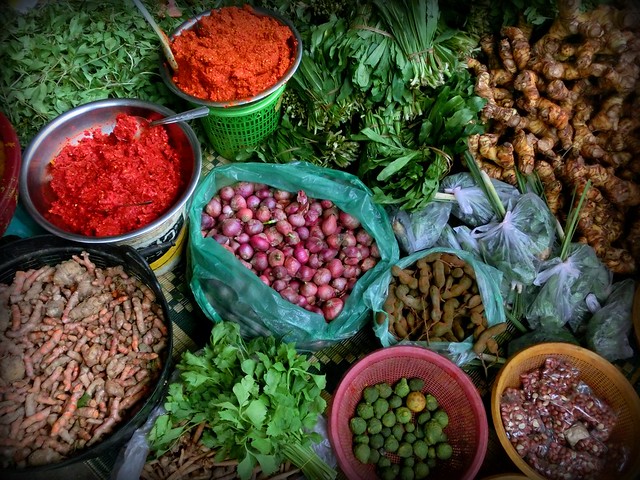 A trip to the food market

The class began with a trip to the local food market.

With umbrellas in hand, we headed out in the rain, kicking up mud on the back of our legs. Toot let the way, intent on teaching us the name and smell of each ingredient so that we’d be able to recognize them at our local supermarkets back at home.

“This is not ginger, don’t call it ginger. It’s galangal!” He led us from one stall to the next, letting us sniff lemongrass, lime leaves, paprika, and other spices. 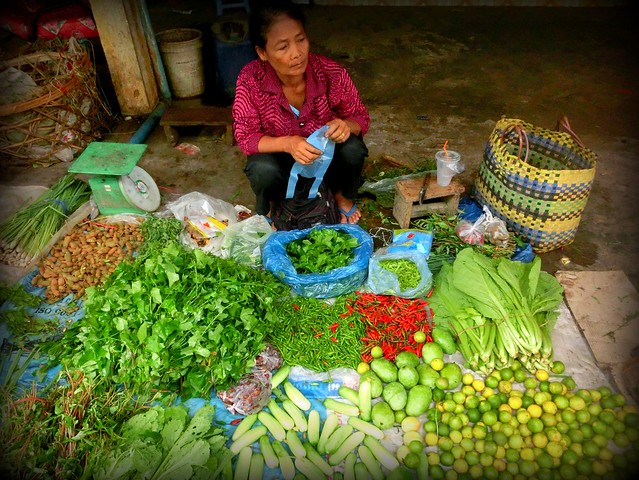 Every time he made a purchase – eggs, coconut milk, taro root – he would pass the bag off to one of his students, so that by the end we were each carrying at least one bag of ingredients.

Once we had everything we needed for the day, he took us on a more extensive tour of the market.

We were stepping over baskets of fresh produce, plastic containers holding live fish, past butcher stands that had piles of entrails, and lastly through the clothing section where we breathed a sigh of relief. (Word of advice: the butcher shop area is not for the queasy! Just look straight ahead.) 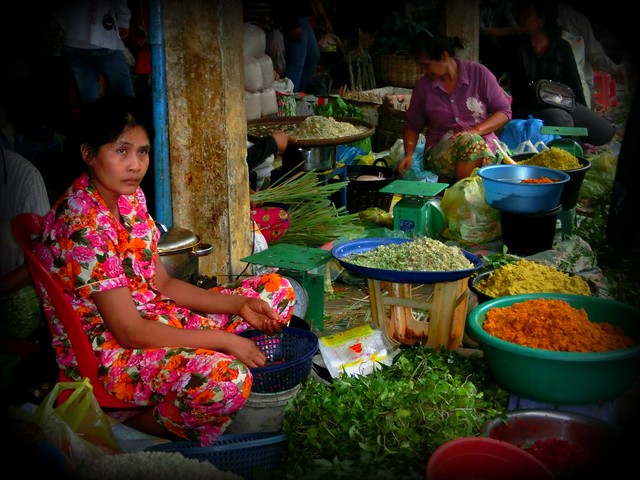 Back at the school we put on our aprons and received our recipe books. Today we would be focusing on three popular dishes:

After three weeks in Cambodia and lots of sampling the local cuisine, I can say that amok is by far my favourite dish! Amok is a fish curry dish, which is coated in coconut cream and then steamed in a banana leaf bowl. The flavours are everything you could want from a coconut based curry!

This was perhaps the most time consuming dish we made in the class, since we prepared our own curry paste from scratch!

We were given a mortar and pestle and then it was time to crush and grind the garlic, galangal, lemongrass, paprika, chillies, turmeric, and other ingredients into a curry paste.

Ten minutes later, we had the perfect blend of flavours to coat the snake fish. 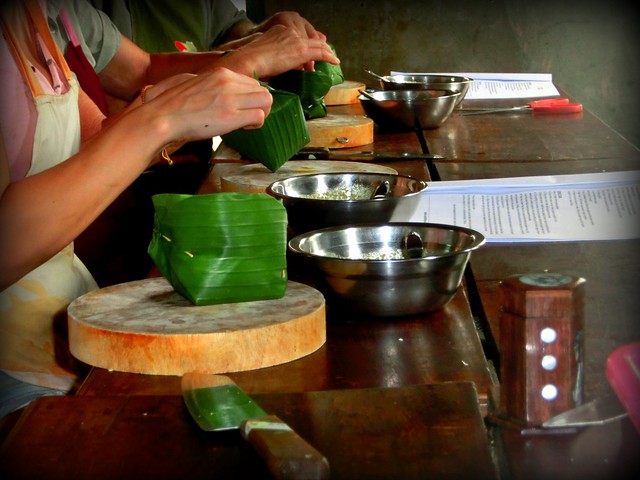 We also had to create our own banana leaf bowls where we would be steaming our coconut curry fish. Toot placed two banana leaves that had been cut into circles in front of us, and then handed us some toothpicks which he had broken in half. He carefully demonstrated how to create the bowls, and then his wife had to come and fix ours when we failed…

Next up we prepared a classic appetizer – spring rolls!

Using the fresh ingredients we had picked up in the market, we chopped up the pork and vegetables, and mixed them into a paste to use as our filling. 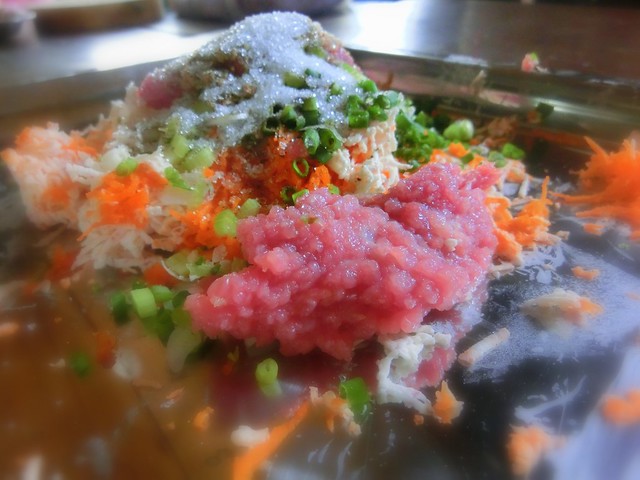 We took small amounts, placed them on one end of the rice paper, and carefully rolled them into little packages.

The spring rolls were then dropped in the boiling oil, and we let them cook until they were golden brown.

Easiest recipe of the day!

The last dish we prepared was something you can find on every menu in Cambodia – lok lak. First, we fried up an egg, sunny side up – this became the base of our dish. Trying not to break the egg yolk which was still a bit runny, we slid our eggs onto our plates, which we then proceeded to decorate with slices of onion and tomato – presentation always matters!

We then took a cut of meat and diced it into little cubes, before throwing it in a sizzling pan along with a lemon pepper sauce we have prepared from scratch. We cooked the meat for a few brief minutes, and that was that! 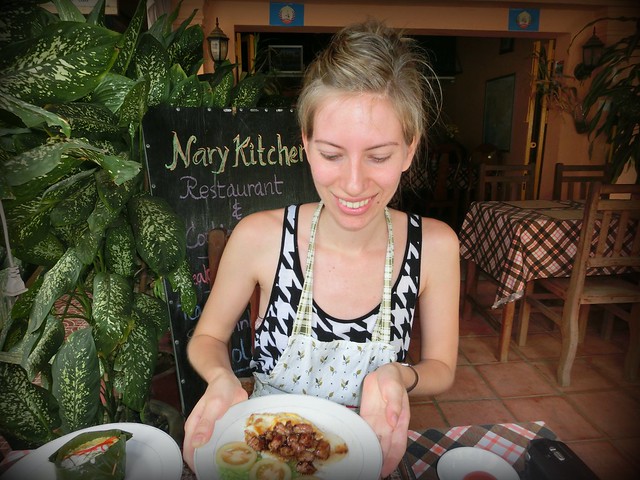 After two hours in the kitchen, it was finally time to enjoy our food!

I wish I could say that after slaving away in the kitchen we sat there and slowly savoured our meal, but that didn’t happen. I was starving, so was the boy, and we devoured each of our three dishes in less than ten minutes. (I told you I was an expert eater!)

For more tips on things to do around Battambang, you can check out my 1-month Cambodia travel itinerary.

Have you ever taken a cooking class? How did it go?