“And men, be careful because the women will pinch your butt.”

Those were the tour guide’s words as we approached the village of the Red Yao tribe. She winked and chuckled as she said this, so we weren’t sure whether she was trying to pull our naive legs or whether she really meant it.

The Spaniard sitting behind me thought something must have been lost in translation so he repeated her words, “pinch? What do you mean they pinch the butts?”

More laughter ensued as those around him demonstrated what he had indeed heard correctly. 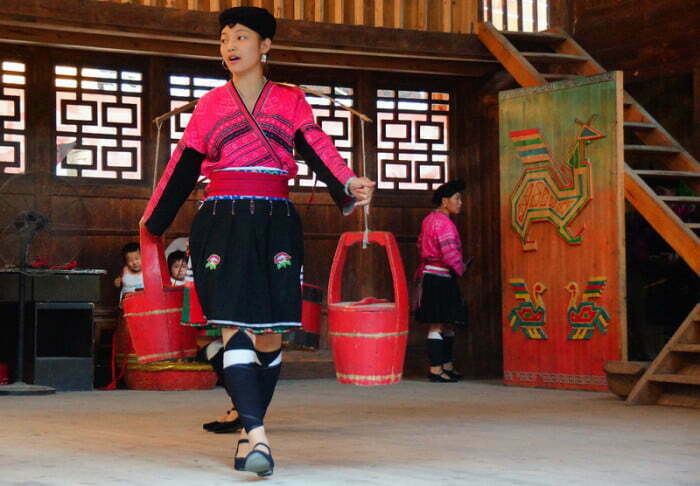 One of the most unique places I visited during my trip to southwestern China was Longsheng, an area which is home to the Longji rice terraces and the famed women of the Red Yao tribe.

Despite what our tour guide told us, what makes the women of the Huangluo Yao Village world-renowned isn’t their playful practice of butt pinching, but rather their hair. You see, the women of the Red Yao tribe have some of the longest hair in the world – as in their hair is almost the same length as their height! 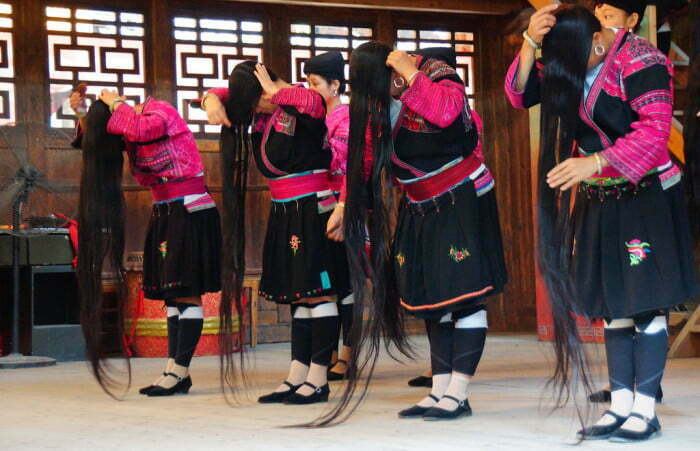 The women only cut their long, black hair once in their life (at 16 when they are ready to start looking for a husband), and as a result many of them boast a mane that is 1.4 to 1.8 meters in length depending on their age.

There are different hairstyles for every stage in life and you can tell a lot about a woman by the way she wears her locks. For example,

Up until 1987, the women’s hair was considered so sacred that it could only be seen by her family. If a man accidentally came across a young woman without her black headscarf on, he would have been forced to live with the girl’s family for 3 years as their son-in-law. However, ever since that tradition was abandoned, the village has become somewhat of a tourist destination drawing curious travellers who want to to catch a glimpse of the longest hair in the world and learn more about this village’s way of life. 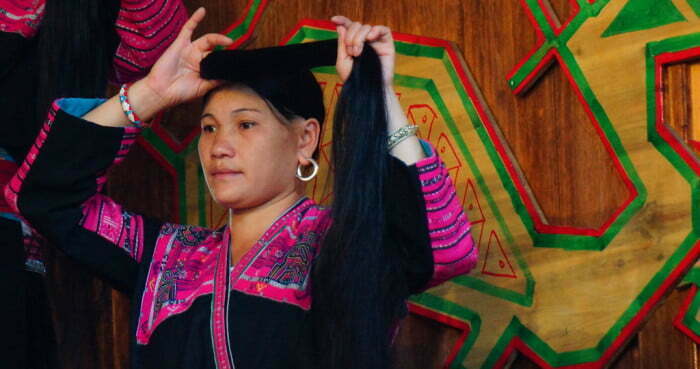 After learning about the different hairstyles from our guide, we also got a lesson in dating and what men look for when it comes to finding a bride. So what does it take to get hitched around these parts?

A big voice – This is because the man is often far from home tending the rice fields, therefore, the wife needs a loud voice in order to call her husband back home when lunch is ready to be served.

Large feet – Because the people of this tribe live in the hills, they need to be strong climbers, and nothing says ‘I’m a strong climber‘ better than Hobbit sized feet.

A big butt – Any woman who is going to be good at childbearing needs to have a large, curvaceous, plump derriere.  Think Beyonce style.

Small hands – The women from this tribe do a lot of needlework and small hands are best for such fine, delicate work.

Now moving on to dating rituals – it appears that there is a bit of a dating game in this community. Literally. If a woman is interested in a man, she will throw a ball at her suitor to express her interest and he will catch it. If there happens to be a lot of competition among the males for this one particular female, the men will battle it out and fight to get the ball. Whoever catches this ball will then enter into a courtship with the potential bride and they will get to know each other over the course of a year. If everything goes well, a wedding will be in order at the end of that time frame.

The only worry – what if your love interest isn’t strong enough to beat out the others?

To end things, here is a little video Sam and I made during our visit to the Huangluo Yao Village, and yes there is plenty of butt pinching and awkward singing by the foreigners who got pulled on stage. Enjoy. 😉

Have you ever encountered a unique community during your travels?