Before coming to Israel I was expecting to feast on lots of authentic Israeli food. Give me all the falafels, the pitas, and the hummus – I will sample them for you!

Imagine my surprise when on my first day at a cooking school in Tel Aviv, the chef informed me that there is no such thing as Israeli food.

The thing is, Israel has a history that stems back thousands of years and the same goes for its food. The gastronomy has been influenced by a wide range of ethnic groups who have settled in the region for millennia – people who have added an assortment of spices, flavours and cooking techniques. This has resulted in a fusion of culinary secrets which can be tracked back to countries in the Middle East, Northern Africa, and even the Mediterranean.

Also, it’s difficult to call a certain dish Israeli when many of the neighbouring countries also claim it as their own. Having spent the past two months travelling through the Middle East, I saw many of the same dishes making appearances across the countries I travelled through. Take hummus for example, is it Israeli, Jordanian, Lebanese? You simply can’t pinpoint its origins because it’s found all over the Middle East! It’s a regional dish. And that is how the chef who told me there was no such thing as Israeli food, introduced me to Middle Eastern cuisine instead.

Now here’s a little introduction to a few favourite Middle Eastern dishes I got to try while I was travelling through Israel: 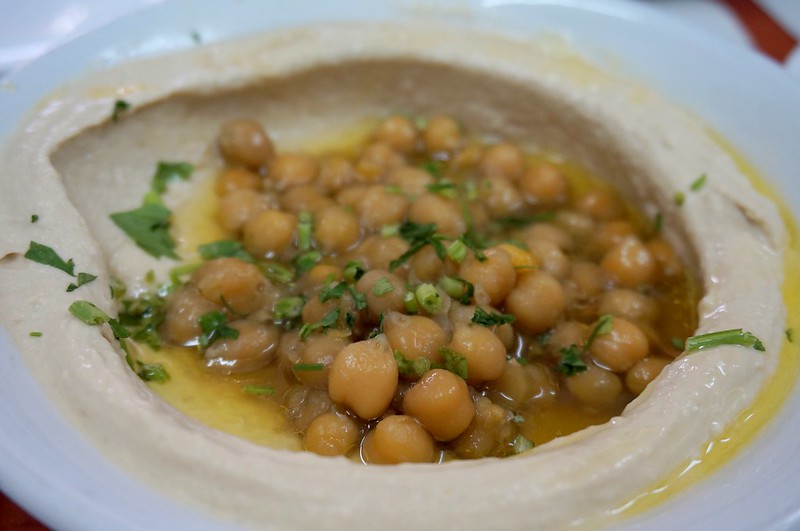 This popular dip made from crushed chickpeas, tahini, olive oil, lemon juice, salt and garlic, was the one food item that made a regular appearance at the table for breakfast, lunch and dinner.

My favourite plate of hummus was the one I had at Hummus Abu Hassan in Jaffa’s Old Port, which happens to be one of best hummus spots in Israel. Their hummus was creamy with a nice kick of garlic and topped off with a bit of paprika. It was here that I learned that most restaurants only make enough hummus for the day because the best hummus is meant to be consumed fresh. The magic is held within the first few hours of preparation and once you refrigerate it, that magic slowly slips away. 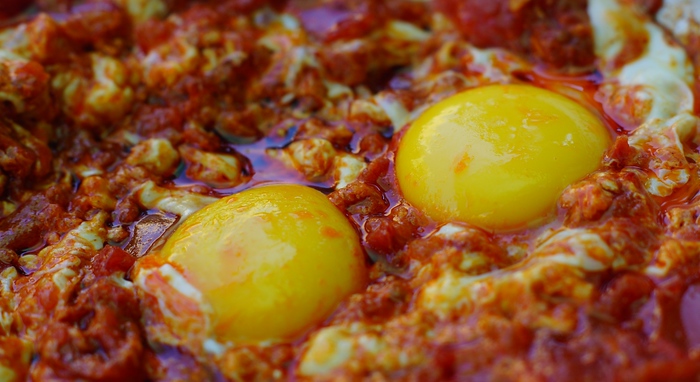 While this saucy little dish is extremely popular in Israel, it’s actually believed to have Tunisian origins (I told you classifying Israeli food was complicated!)

Shakshouka is made by preparing a rich tomato sauce with onions, peppers, garlic and lots of spices. Once the sauce is ready, you crack a few eggs overtop and cover the pan to allow the eggs to cook over easy. You let the whole thing simmer for about 10-15 minutes, and voila!

Shakshouka is generally served in the pan it was cooked in, and it’s a communal type dish where everyone can dip their bread. Just like with hummus, this is a dish that can be eaten anytime of day, though most locals admittedly like it for breakfast.

Sambusak is a pastry that you can pick up at almost any bakery and it is best enjoyed fresh out of the oven.

The one I tried was stuffed with salty feta cheese, spinach, and then coated in sesame seeds. This was meant to be a little snack along the way, but I found it filling enough to be a meal in itself. 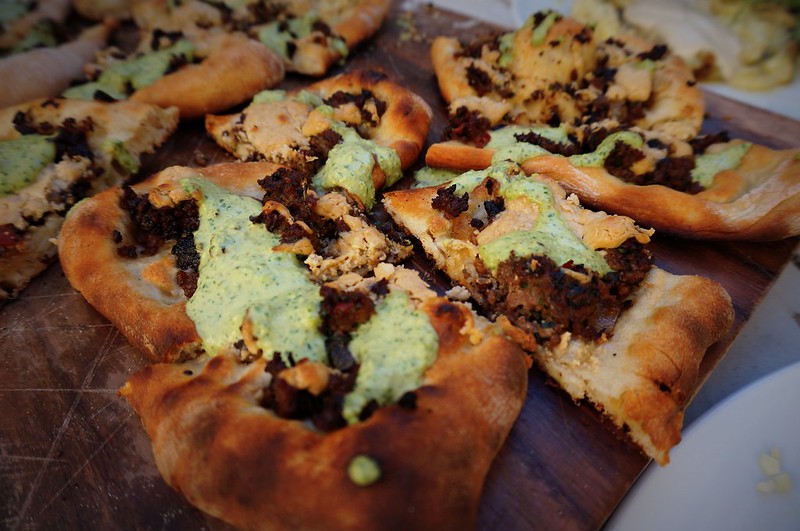 While lahmacun is best known as a Turkish-style pizza, I was surprised to also find it in Israel. (See, recipes travel far!)

Here’s another shocker, the photo you see above is of the pizza I helped prepare when I took a cooking class at Dan Gourmet. Yup, I rolled out that dough and it was topped off with lamb, parsley, onions, tomatoes, and a green tahini sauce. 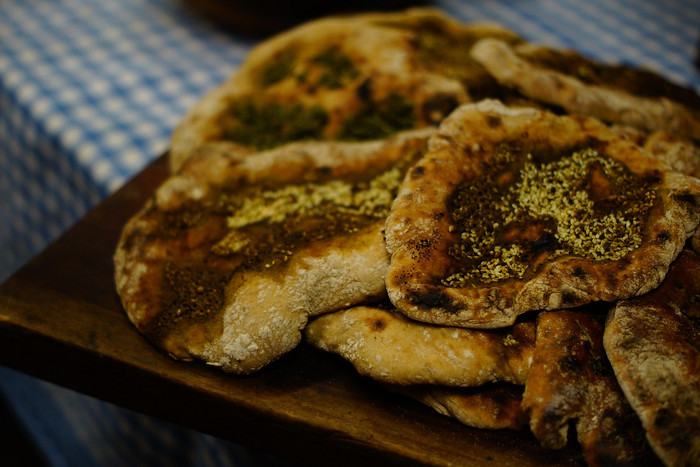 Zaatar is a combination of Middle Eastern spices that can include dried thyme, oregano, marjoram, sesame seeds, cumin, coriander, salt, and a few others. The trick to baking a delicious batch of pita with zaatar is to add a little olive oil to the dough and then sprinkle a generous amount of zaatar overtop. This makes the perfect snack on its own, or you can pair it with a light tabbouleh salad in the summer, or a hearty stew in the winter.

Knaffe is essentially a cheese pastry which has been soaked in a sweet sugary syrup, and covered with a crust of shredded phyllo dough that somewhat resembles a bird’s nest.

This is another dish with mixed origins; while most recipes seem to point to Lebanon as the rightful creator, Knaffe is popular in Israel, Jordan, the Palestinian territories, Syria, Northern Egypt, Turkey and even Greece.

This sweet milk pudding was one of the best desserts I tried during my trip. While it can be eaten plain, the one I had was covered in a raspberry syrup with some chopped nuts and shredded coconut sprinkled overtop. It was very light, creamy, and highly addicting. 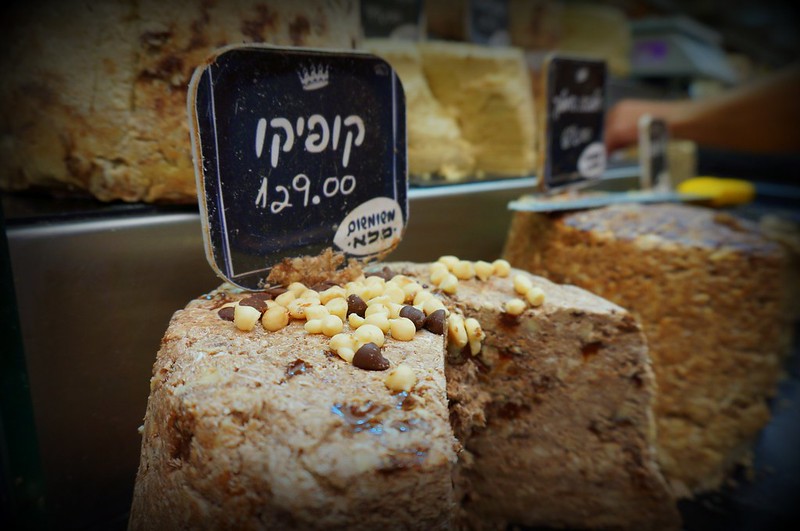 And last but not least, we have halva. There are actually two types of halva; the flour based dessert and the nut-butter based dessert. I tried the latter which is made from a sesame seed paste known as tahini.

Never did I imagine tahini could be turned into a dessert – I mean, this the same ingredient used in hummus and baba ghannouj – but as it turns out, you can turn it into something sweet. Walking through the Mahane Yehuda Market in Jerusalem, I was surprised by all the halva varieties available – with vanilla, raisins, peanuts, dark chocolate, white chocolate, pistachio, coffee, cherry, almonds, and so much more. A nice little treat when paired with a cup of coffee or tea.

Have you tried Middle Eastern food? Do you have any favourites?