I had heard the desert held a certain magic, but it wasn’t until I went there myself that I understood what people meant by that. Wadi Rum is a place that echoes with laughter by day and where you hear the void of the desert by night. It’s a place that matts your hair and stains your cheeks orange with dirt, but leaves you overwhelmingly happy at the end of the day. It’s a place where the earth glows red under the sun, and where you can gaze up the cylindrical spheres that twinkle in the midnight sky. It’s a place that T.E. Lawrence (better known as Lawrence of Arabia) described in his notes as “vast, echoing and God-like”, and it’s a place that I hope I can one day return to.

While my time in the desert felt like a mere passing, here are a few of my favourite moments:

Off-roading in the back of a pick-up truck 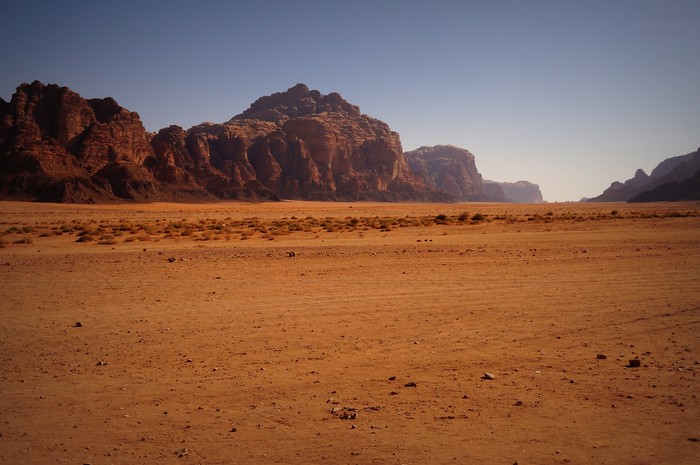 With scarves wrapped around our heads and sunglasses to shield our eyes from the sand, we hopped in the back of a Toyota pick-up truck and began our journey into “The Valley of the Moon”. Our first few days in Jordan had been spent exploring the ancient Greco-Roman ruins of Jerash, communing with nature in the Dana Nature Reserve, and reaching the Lost City of Petra, however, this, the wild untamed desert, felt like the Jordan I had been looking for all along. 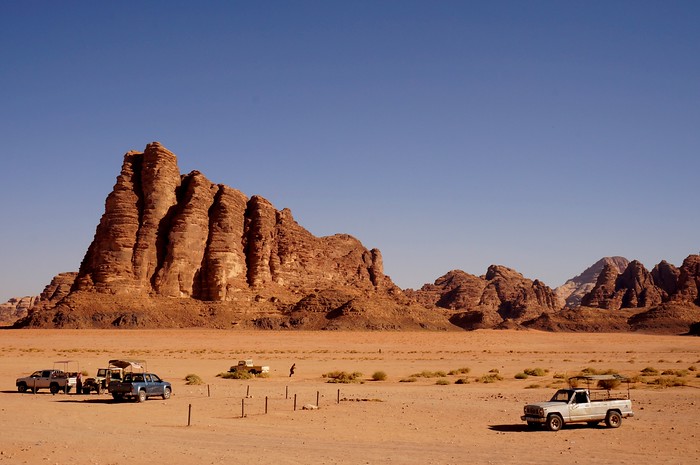 That day I ate my lunch with the iconic view of “The Seven Pillars of Wisdom”; the rock formation looked monstrous in the distance, however, I wouldn’t realize the sheer scale of the towering rocks until our driver was speeding into the desert with no roads – just rocks – to guide his way.

While the wind carried the sound of Arabic music and ululations from our caravan across the desert, for our group it was one of those silent journeys where we just marvelled at the magnitude of our surroundings and wondered how we even ended up here.

Hiking the dunes of Wadi Rum

Once we reached the sandy dunes, our tour guide Mohammad was the first one to hop out of the truck and take his shoes off. “You want to climb to the top?”

The dunes were steep but we were all ready to unleash our inner Lawrence of Arabia. Accepting his challenge, we scrambled out of the truck pulling socks, sandals, and running shoes off our feet. Since the sun had already begun its descent, the sand felt cool between our toes.

We raced each other to the top kicking up red sand and sinking our heels as we vied for the summit. I have never seen a group of travellers so giddy to be in the desert. It felt like our own playground; one where we could prance, roll downhill, and get sand in our pockets, hair and ears. 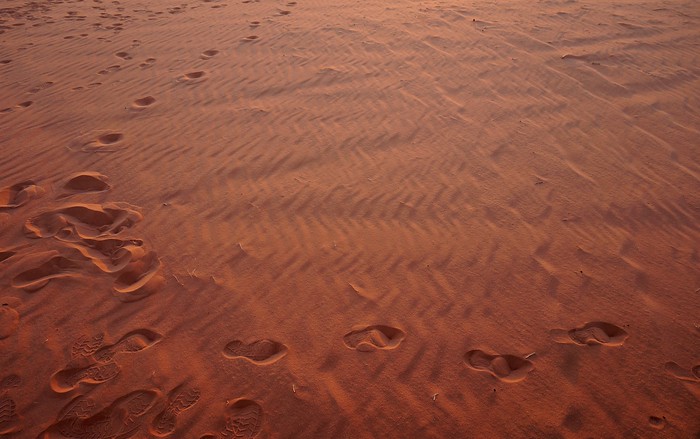 After the thrills of off-roading and running through the desert, our driver pulled over just as the sun was beginning to set. I don’t get to catch a lot of sunsets, but this one was the kind where you put down your camera and watch the colours change before your eyes until a veil of darkness shrouds the landscape.

Dancing and feasting with Bedouins 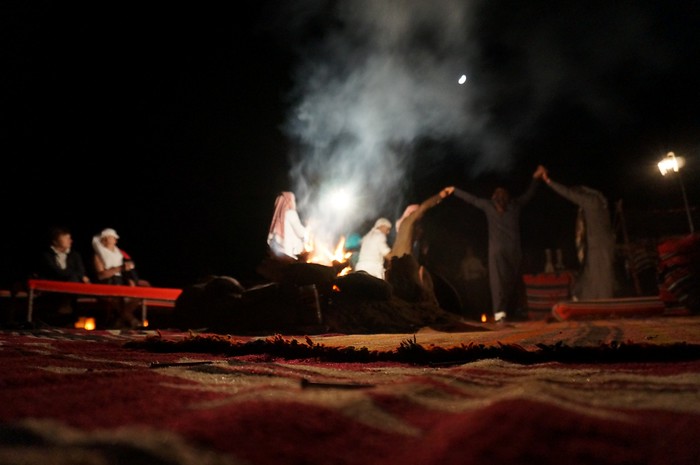 At last, we arrived at our own private camp nestled in the canyon. Paper-bag lanterns lined the entrance and led to a common area where rugs covered the ground, and sofas and pillows invited us to grab a spot close by the fire. Though the sun had already set, the day’s activities were far from over. Our Bedouin camp keepers got the night going with traditional songs so lively they beckoned us out of their seats. We tried our best to imitate our new found friends as they bounced, clapped, and got tricky with their footwork, before finally settling on a dance circle around the fire. A great way to work up our appetite! 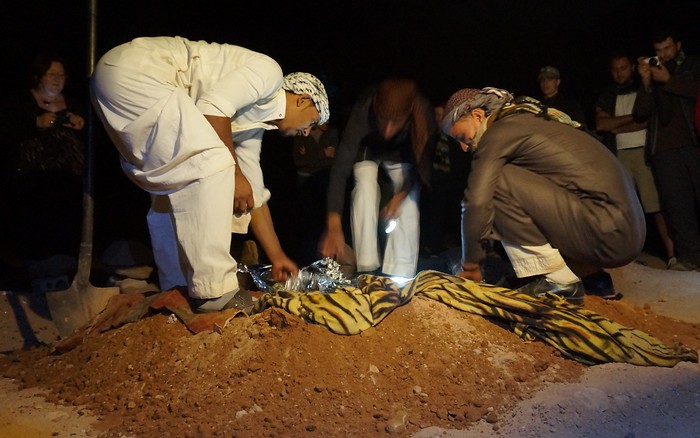 Later that evening we had a zarb, which is a Bedouin style barbecue. Our meal of lamb, chicken, potatoes and vegetables, had been cooked all day in a hot coal oven buried under the desert sands. When the food was ready, a bell rang across the camp and our group went out to see the unveiling of the evening’s meal. Sand was brushed away, blankets were pulled off, and the lid was lifted to reveal a tiered barbecue grill holding an exquisite dinner. 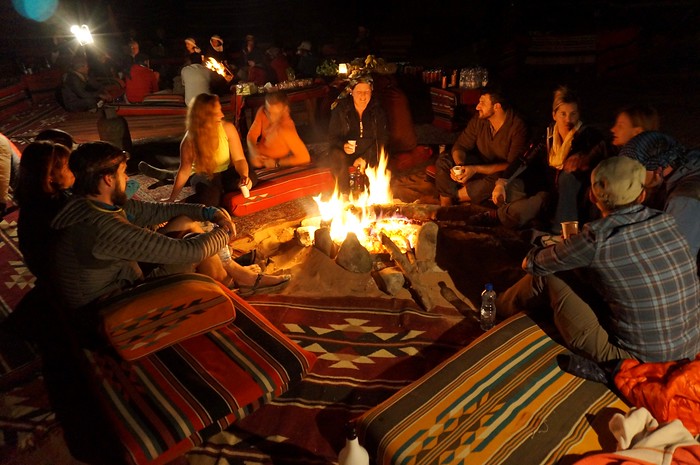 The evening was capped off with a smoky fire, a few rounds of shisha, and hot cups of mint tea (and maybe a few drinks) as we chatted and watched the stars appear in the night sky.

Riding a Camel at Sunrise

After a night spent camping in the desert, we woke up to the sound of a herd of camels grumbling outside our camp; these other worldly creatures would be our transportation to the main Captain’s Desert Camp where breakfast was being served. 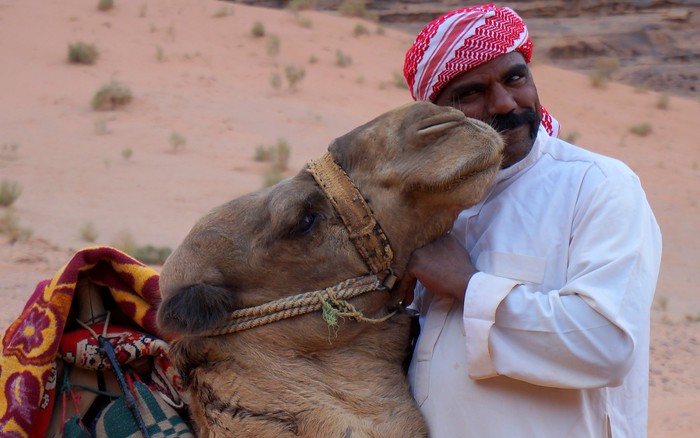 While I tried to keep my distance from the camels (aren’t camels known for spitting at innocent bystanders?), our Bedouin guide got affectionate with his desert beast, stroking its head, scratching its chin, and even giving it kisses.

This early morning ride allowed us to see the desert in a different light. Our afternoon journey had been one filled with dramatic shades of persimmon, burnt orange and dusty reds, however, the morning revealed paler hues of pink and lavender which gave the desert valley a completely different feel.

My time in the Jordanian desert felt all too brief. I wish I’d had more time to wander through the canyons, hike even steeper dunes, and learn to brew the perfect cup of sweet mint tea, but I guess that gives me a reason to return one day.

Have you ever camped out in the desert?
Is Wadi Rum on your bucket list?

For more Jordan posts, check out:

Destinations in Jordan, because there’s more than just Petra

Petra: Journeying into the Lost City

A Night in the Dana Biosphere Reserve 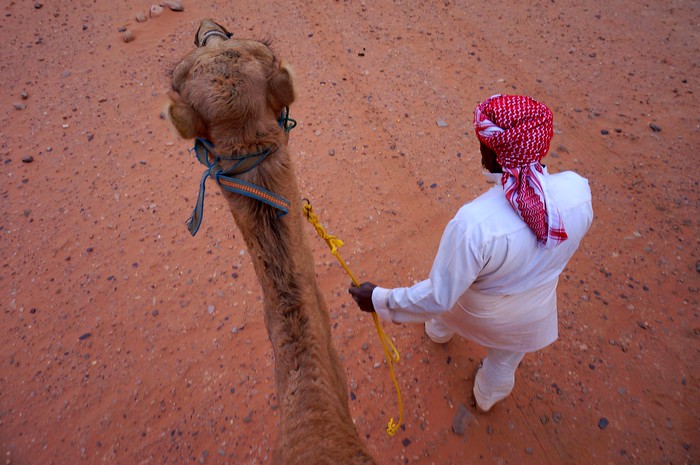