If you’re travelling to Israel you’ll likely fly into Tel Aviv and then make a beeline straight for Jerusalem. I can see why; Jerusalem is a city with so much history that you could easily spend several days wandering inside the ancient city walls alone. (Even with two visits to the city under my belt, I still feel like I have so much left to see there!) However, as fascinating as Jerusalem may be, there are also lots of other destinations worth making the time for. In no particular order, here are a few of my personal favourite day trips around Israel:

While Masada passed through many hands, the ancient fortification was made famous by Herod the Great who built himself a palace overlooking the Dead Sea atop the plateau. Aside from the pools, courtyards and bathhouses for his personal enjoyment, he also built storerooms, army barracks and walls to protect himself.

Furthermore, Masada has a bit of a dark history because it was the setting of “The Siege of Masada”, a Jewish rebellion against the Roman Empire which ended with 960 Jews taking their own lives rather than succumbing to the Romans. 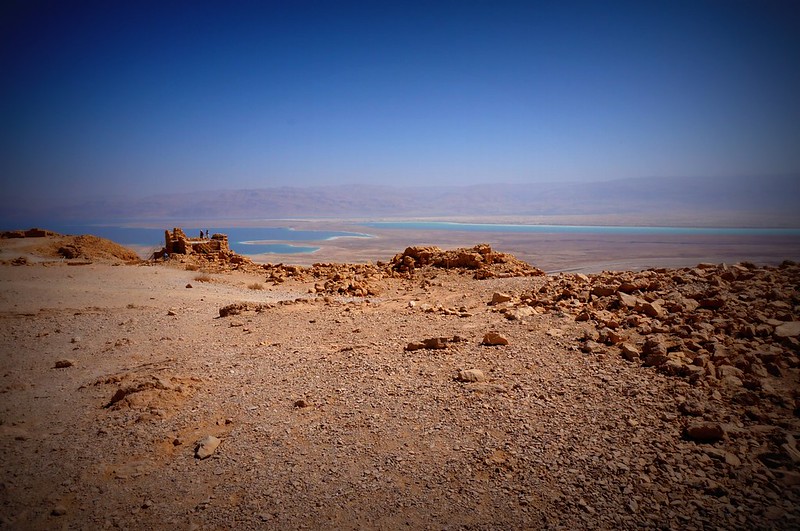 Today, there are a few different ways to experience Masada. If you don’t mind the early wake-up call, there is the option of hiking the Snake Path just before dawn in order to reach the summit by sunrise. The sun will begin its ascent over the Dead Sea and the Moab Mountains in Jordan, illuminating the valley below. This climb takes about an hour to complete.

If you’d prefer something a little less challenging, then there is the option of taking the cable car up to the top once the ticketing booth opens. Since it was still quite hot when I visited in October, this was my preferred method. 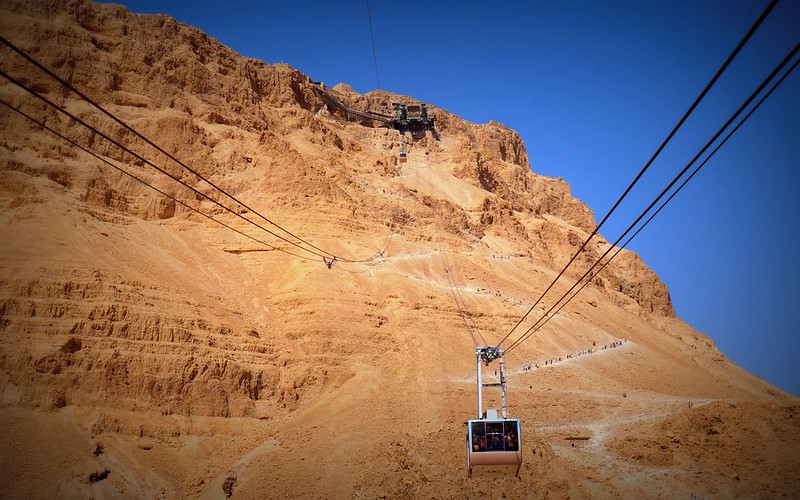 You’ll also want to bring plenty of water and wear a hat or a scarf to cover up from the sun as there is hardly any shade where to seek a reprieve atop the plateau. 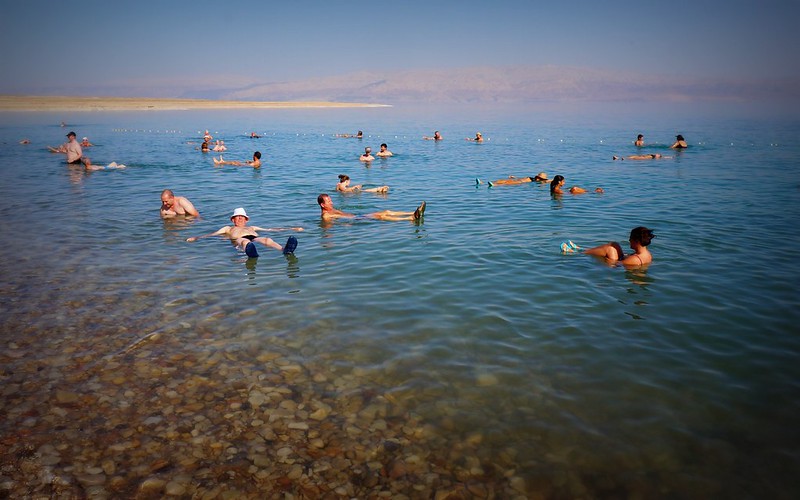 No visit to Israel is complete without going for a dip in the Dead Sea. Located at 423 meters below sea level, it gives you the right to say that you’ve been to the lowest place on Earth, plus floating in the ultra salty waters is a pretty strange sensation. 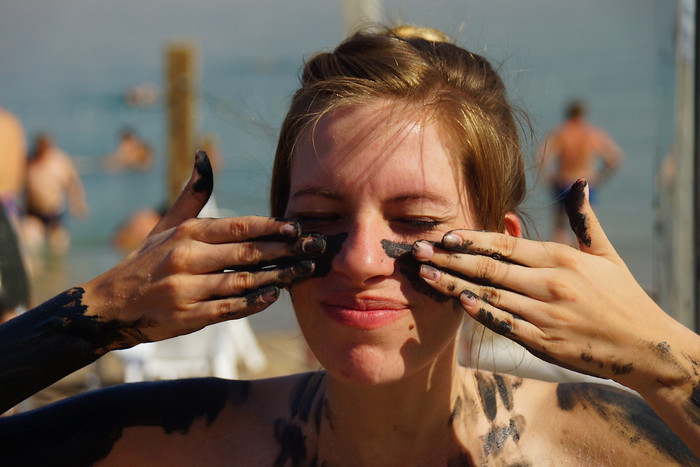 A visit to the Dead Sea offers plenty of health benefits as the salt water and black mud treat a myriad of skin ailments. Just remember, whatever you do, you do not want to get any water on your lips or in your eyes! 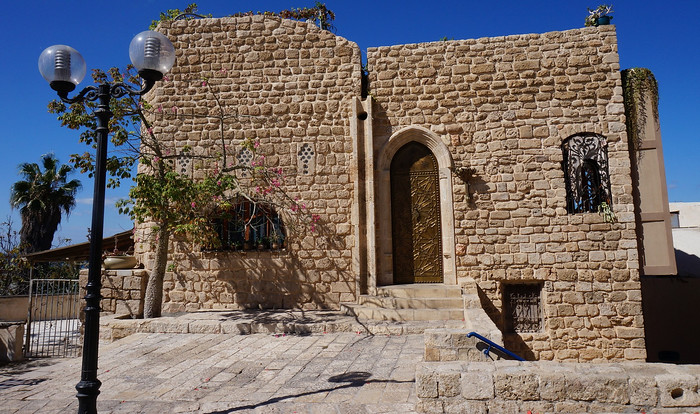 Before Tel Aviv was even on the map, Jaffa was already a bustling little port city with plenty of tales to tell. Ever heard of Jonah and the Whale? This is the same Jaffa port he left when he was trying to run away from the mission God had assigned him. But prophets and whales aside, this is a very charming city to wander on foot. The buildings in this area have been restored and the combination of bright blue skies, bright blue seas, and bright blue window shutters make it a rather pleasant place to spend the afternoon. 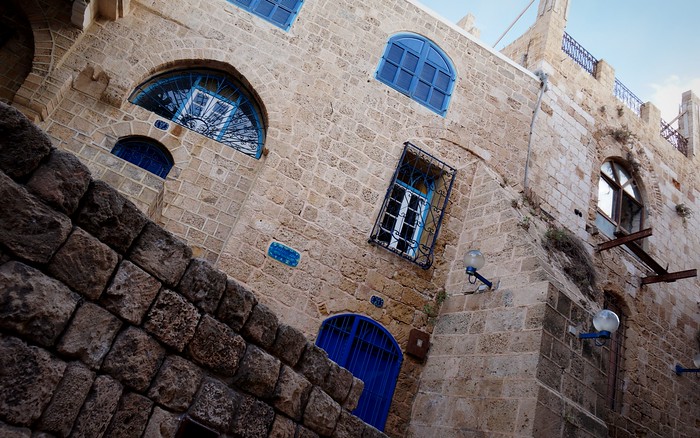 Jaffa is also home to a flea market and bazaar where you can shop for antique furniture, artwork, musical instruments, hookah pipes, hand-woven carpets, and even belly dancing outfits. The seaside boardwalk which runs from Jaffa to Tel Aviv also makes for a very nice stroll. 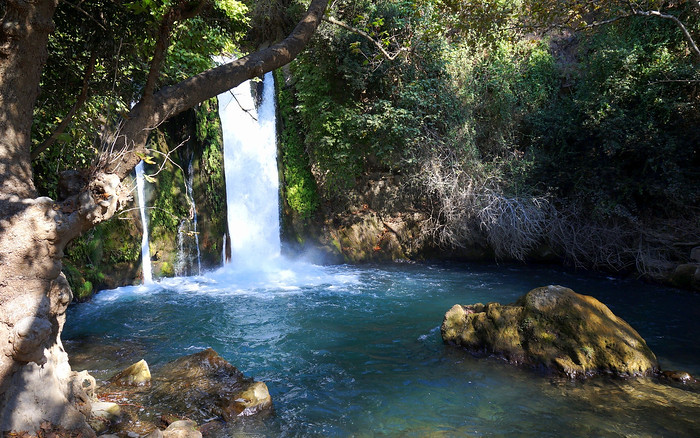 The Banias Nature Reserve is a place that you want to visit with plenty of time to spare so that you can hike the trails in the area. There are 4 different trails to choose from: three which are 45 minutes in length, and one which is 90 minutes in length. While you can take a shortcut straight down to the waterfalls, I recommend doing the full hike since there’s plenty of shade along the way and it really isn’t that demanding a trail. 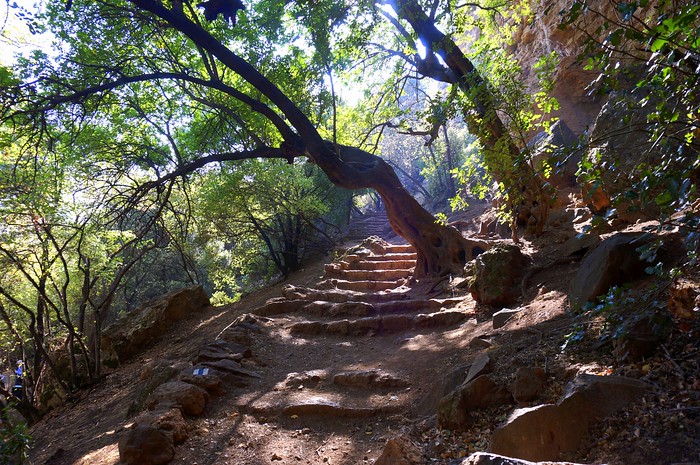 Nearby, you’ll also find the remnants of the Temple of Pan, a complex which was dedicated to the God of the Forest and the Shepherds. I found it a really interesting place to visit because when you reach the end of the trail, you come face to face with a wall of rock filled with hand-carved niches. This area, as well as the nearby cave, used to be a place of worship for the Greeks who passed through here as a result of the conquests of Alexander the Great. Except for the odd column, the temples that once stood here are now long gone, but you can still get a sense of why nature lured the Greeks to worship here. 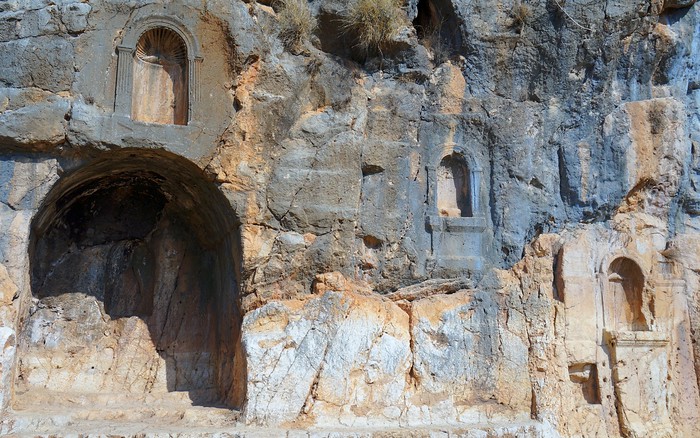 The seaport city of Haifa located at the footsteps of Mount Carmel has the distinction of being the main headquarters to the Baha’i faith. The Baha’i is a monotheistic religion which accepts teaching from a range of faiths, including certain messages taught by Moses, Buddha, Jesus, Muhammad, and others. The Baha’i faith teaches: (1) unity of religion – that all major religions have the same spiritual source and come from the same God, (2) unity of humanity –  that all humans have been created equal, and (3) the celebration of diversity of race and culture. 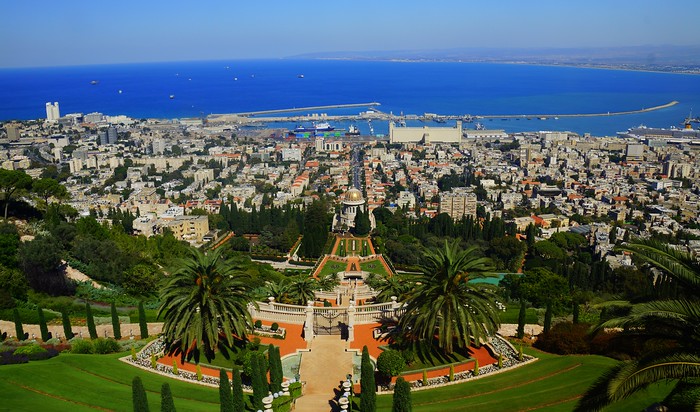 The massive Baha’i Gardens in the centre of the city are the most dominant feature in the skyline, and while you can visit the gardens on your own, it’s worth joining one of the free tours so that you have access to parts of the garden that are normally off limits to those visiting without a guide. You’ll also have the opportunity to see the interior of the main temple, which is surprisingly simple considering the extravagance which has gone into the gardens.

Located halfway between Tel Aviv and Haifa, Caesarea is an ancient Roman city which was built on the shores of the Mediterranean Sea. The port city was built up by Herod the Great and named Caesarea as a way to honour his emperor, Augustus Caesar. Considering this was once a thriving city, the grounds are quite extensive, and you’ll need a minimum of an hour to walk the entire length. 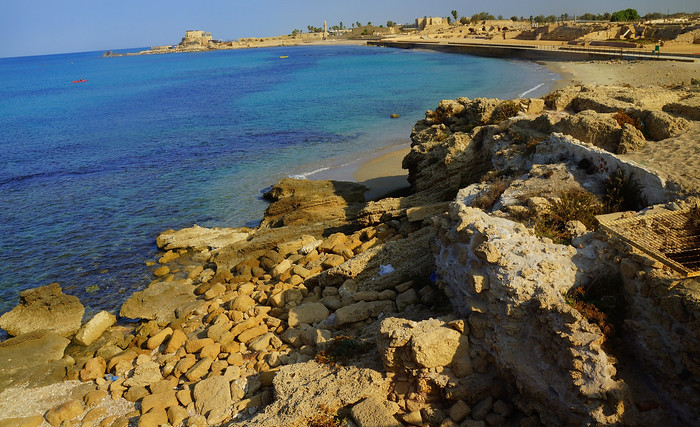 Inside the archaeological site, you’ll be able to see the theatre which had a capacity for 4000 spectators, the remains of the luxurious bathhouse complex, the Hippodrome where chariot races would have taken place, and the turquoise harbour which is popular with kayakers.

A visit to Rosh Hanikra will bring you to the border with Lebanon, but it’s what’s under the rocks that will capture your attention. Rosh Hanikra is home to a network of grottos that were carved into the rock by crashing waves. The grottoes are accessed by riding the steepest cable car in the world (which thankfully is a short 2-minute journey!), and once you reach the bottom of the chalky white cliff, you can wander through a maze-like path where the water glows azure. 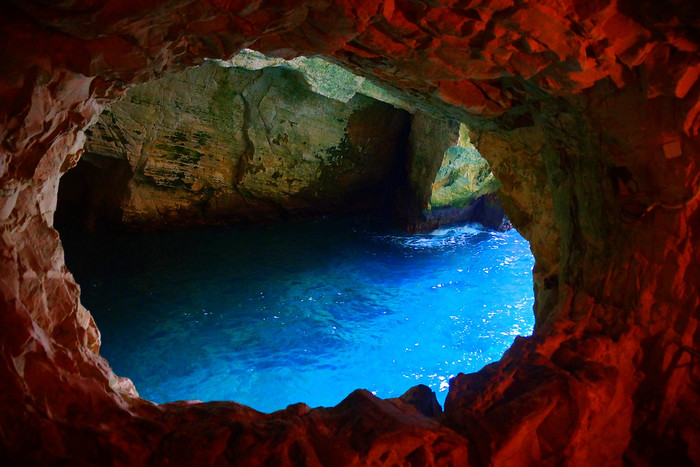 Also, if you make it all the way out here, you can’t miss the hyrax! These strange looking creatures, which I can best describe as a giant hamster, live along the rocky shores and can scale the rock wall better than mountain goats. Not only that, but they are extremely curious and will come and stand at your feet if they think there is any chance you may have some food on you.

Nazareth is the city that surprised me the most out of all the places I visited in Israel. While I didn’t find the modern parts particularly interesting, setting foot in the Old City was a completely different experience. This was a place where time slowed down, the crowds dispersed, and you could feel a certain calm in the air. The highlight of my time in the Old City of Nazareth was staying at a restored 200-year-old Arab mansion and exploring the little winding streets of this city. 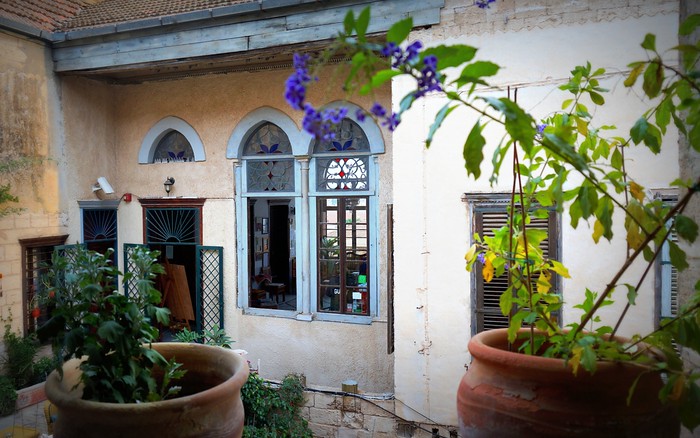 For any trekkers out there, Nazareth is also the starting point for the Jesus Trail, a 65-kilometre journey that takes you through the rugged regions of the Galilee all the way out to Capernaum. 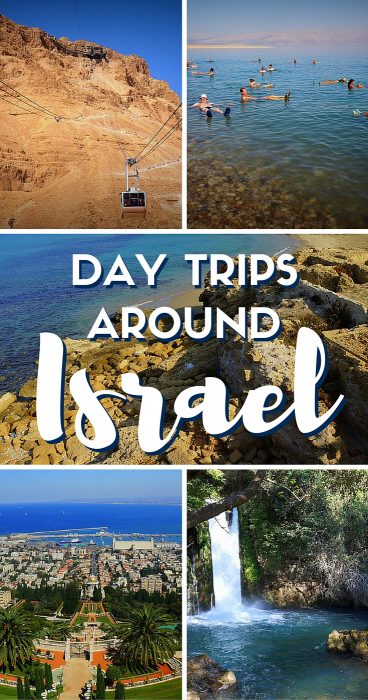 Of course, this is but a mere sampling of everything there is to see and do in Israel. You can also camp in the Negev Desert, hike through the Ein Gedi Nature Reserve, visit the city of Tiberias on the shores of Galilee, spend a day winery hopping through the Judean Hills, dip your feet on the banks of the Jordan River which act as a border with Jordan, and so much more!

While in Israel, I did most of my sightseeing with Abraham Tours. Getting around Israel can be downright difficult, not to mention pricey, however, Abraham Tours offered action-packed tours that I felt had a good balance of biblical and historical sites, time outdoors in the nature reserves, visits to local wineries and breweries, as well as a few quirky attractions along the way. The days were long and demanding, but if you’re on a constrained schedule and want to make sure you see as much as possible, then it’s a good way to go.

What other day trips around Israel would you recommend?