Like Halloween on steroids, the Loony Dook is the wackiest event I have ever attended. Because the three-day long Hogmanay celebrations aren’t enough for the Scots, on New Year’s Day, they tack on yet another event for those brave souls who want to fight their hangovers and raise money for charity – The Loony Dook!

At this year’s Loony Dook hundreds of people took the plunge into the freezing waters of the Firth of Forth. Bundled up in my winter’s best, I watched from the pebbly shores as families and groups of friends ran in, splashed around in the water for a few brief seconds, and then raced back out to the shores with half-frozen extremities. The look on most faces was one of horror at realizing just how cold the Forth was, and joy to have actually braved the waters that few dare dip a finger in this time of year.

There were lots of great costumes at the event, including Little Red Riding Hood and the Big Bad Wolf, a couple of minions inspired by the movie Despicable Me, a group of friends dressed as Tigger from Winnie the Pooh, Pebbles from The Flintstones, a few Santas, another group inspired by Dr. Seuss’ Thing 1 and Thing 2, a man in a mankini, and also a gentleman who wrapped himself in bubble wrap and then began to float away.

Here are some fun photos from this strange event that takes some serious guts and perhaps a dash of madness! 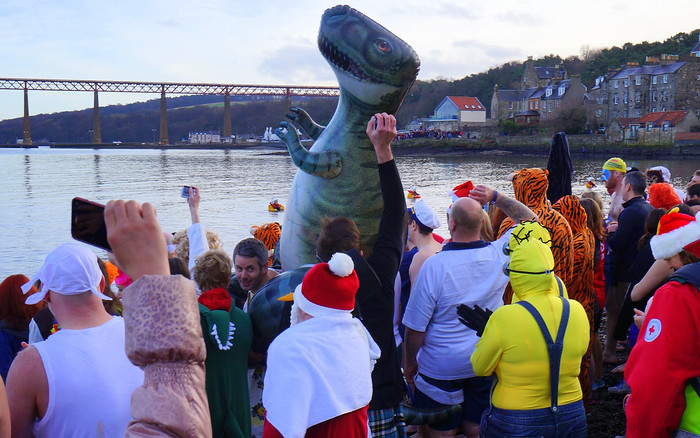 You can’t jump into the waters of the Firth of Forth without an inflatable dinosaur for protection.

Lots of hooting and hollering as people realize just how cold the water is.

Loony dookers race out of the water as soon as they have done a quick dip.

There was no Winnie the Pooh in sight, but I did spot several Tiggers.

Two Haggis Adventurers take a dip in the frigid waters.

Two friends dressed as a giraffe and a cow come splashing out of the water.

And I think we can agree that these two win best outfit of the event.

Spectators all bundled up and laughing at the Loony Dookers.

Would you take a dip with the other loonies?

#blogmanay is brought to you by Edinburgh’s Hogmanay and is supported by ETAG, EventScotland,
Homecoming Scotland, VisitScotland, Edinburgh Festivals, Marketing Edinburgh, Historic Scotland and
co-creators Haggis Adventures. Created and produced by Unique Events.