There are some places so special that it doesn’t matter how many times you’ve seen them in documentaries, textbooks or postcards, they still manage to exceed all of your expectations.

For me, Petra was that place.

The long walk down The Siq was both a history lesson and a time to marvel at nature as we entered like minuscule ants into the mouth of the great canyon.

It’s no wonder Petra remained lost and forgotten to much of the Western world for as long as it did – enclosed by towering rocks and accessible via a long, narrow canyon, this place isn’t exactly easy to reach. 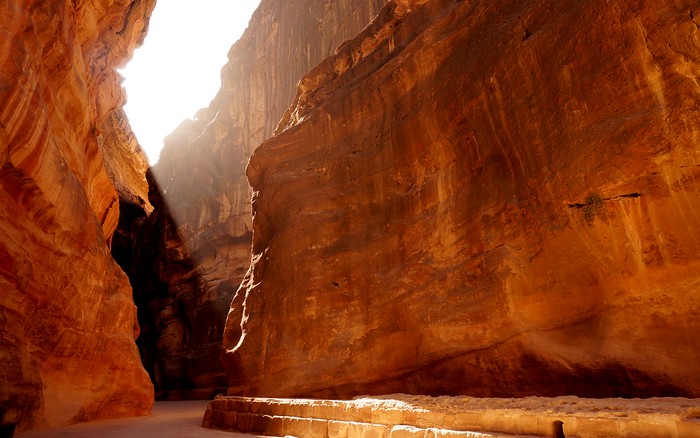 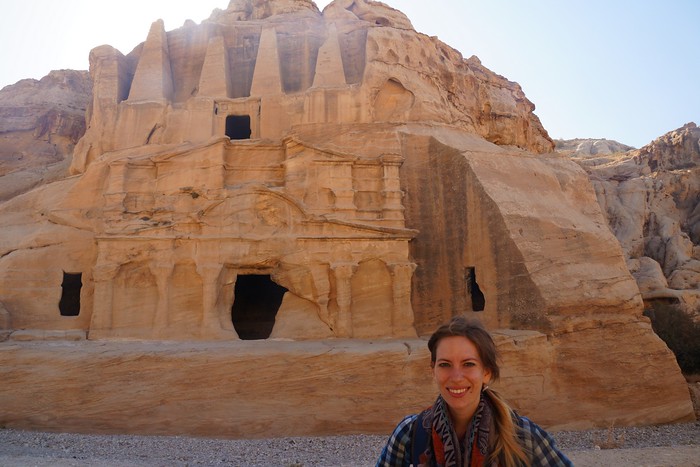 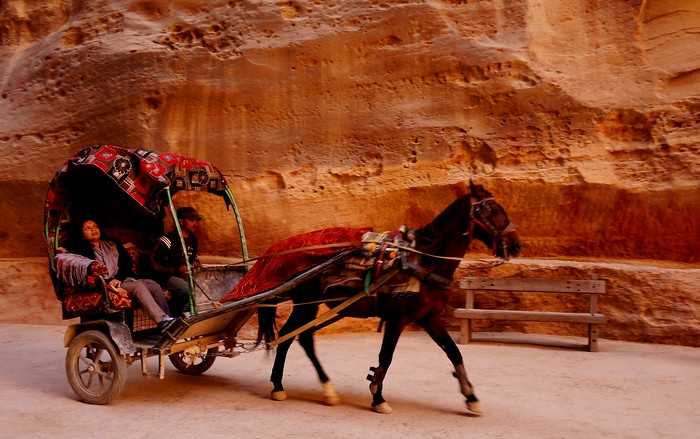 The stories on the wall

Having our guide Mohammad along for the journey really helped bring Petra to life. While my eyes just saw walls of red rock, he was able to point out unique natural formations and small details which helped reveal the history of the Nabateans.

Every so often Mohammed would pull our group aside and have us study the rock formations.

“Do you see the fish from this angle?”

“Ahhhhh, yes, a fish!” we would agree as we stared at the rock as though we were admiring a Picasso.

“How about from this side? Now it’s a human face.”

“Ahhhhh, a human face,” we would agree again as a new figure was revealed.

“Now from this angle; do you see the golfer?” Mohammed continued.

Ever so trusting, we would squint our eyes, tilt our heads, and crane our necks back trying to identify what our guide was seeing. That’s when we would hear Mohammed quietly laughing at us while we naively tried to spot a rock formation that didn’t exist.

He was certainly a lot of fun to have around. 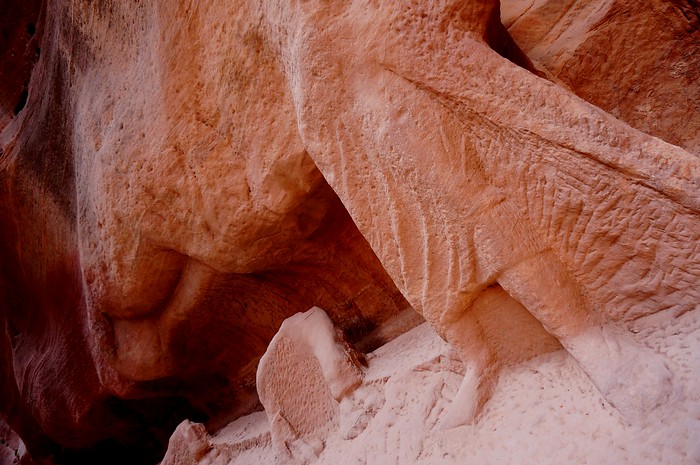 Further down in the canyon, Mohammad stopped again to examine a few faint remains of a wall carving that would have been truly impressive in its heyday. He outlined figures that my inexperienced eyes had initially missed – a three camel caravan led by a man.

“Do you see something on the man’s sandal?” he asked us. “Look closely.”

We peered closer looking for traces of ancient markings. What kind of cryptographic message had the Nabateans left behind for us to discover?

With our eyes inches away from the sandal, he revealed the big secret.

“It says made in China!”

Ever the trickster, Mohammad stopped in front of two niches carved into the wall.

“What do you think this is?”

We all looked at each other…were we supposed to see the outline of yet another figment of his imagination, or were we really missing something?

“Urinals” he exclaimed, “these are old urinals! See?”

“Ohhh…” we nodded in agreement. That made sense, every man needs a place to relieve himself in the canyon.

Next he pointed to Samuel and me.

“You two, come stand in the urinals.”

I found it odd that I was selected to demonstrate how a man would stand in these ancient urinals, but I stepped up to the plate nonetheless and turned to face the wall as though I were about to pee like a man.

He smiled that great mischievous smile of his revealing that these so called ancient urinals were really a chapel.

Good thing our friend Anne was on hand to capture the union.

A glimpse of the Treasury

After our casual wedding ceremony, we continued walking down the canyon enroute to Petra. Of course, our guide Mohammad had yet another little trick up his sleeve.

Still talking about the Nabateans, he stopped in the middle of the gorge to point at a rock high above us.

“Look at that unique carving overhead!”

I stared up in the general direction he was pointing at and was blinded by the light streaming down through the canyon. What was he talking about?

Right about that time we joined up with another group of travellers we knew and one of the team members was playing the Indiana Jones theme song on her speakers – we had to be getting closer to the Lost City! I, however, was oblivious to whatever was happening because I was too busy trying to follow Mohammad’s instructions…

As I turned around to ask Mohammad to point again at whatever rock he was referring to, I realized that I had my back to the Treasury! Yes, just behind me through a thin opening in the canyon, I could see the Lost City of Petra all lit up in that familiar shade of burnt orange.

I honestly couldn’t have asked for a better reveal!

Even though we had been walking towards Petra, I hadn’t been expecting the Lost City to come into view so soon. I was laughing out loud and grinning so hard it hurt when I finally saw it.

Once we walked out of the canyon, I stood in front of the Treasury for a good 15 minutes before I could even bring myself to continue exploring the rest of the grounds.

And then came the next surprise – did you know there is a whole lot more to Petra than just the Treasury? I hadn’t bothered reading up on the place before visiting – I wanted to be surprised – but because of my lack of research, I also had no idea that Petra was such a vast city with so many tombs and temples.

I was in for a real treat!

The far corners of the Rose City

If you’re travelling to Jordan and you’re coming all the way down to Petra, do yourself a favour and plan to spend a few days exploring the extent of it.

For starters, it takes anywhere between 45 minutes to 1 hour to walk into Petra through the Siq and reach the Treasury, however, once you are there, there is a lot more exploring left to do! 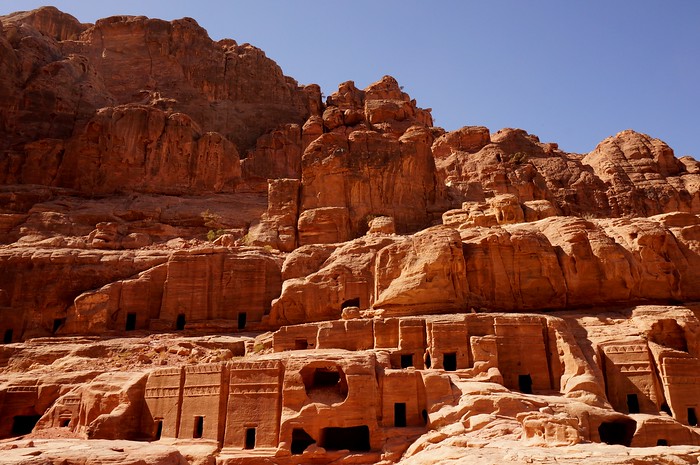 The road which winds through the city will lead you past a number of attractions including the theatre, the Urn Tomb, the Corinthian Tomb, the Palace Tomb, the Cardo Maximus, the Great Temple, the Columbarium, the Winged Lion’s Temple, and if that’s not enough, you can then climb the 850 steps up to the Monastery.

If you’re interested in visiting any of the tombs and temples along the way, you’ll sometimes have to detour and begin hiking uphill until you reach the entrance to these impressive structures. It’s hard work in the searing desert heat, and you’ll want to plan for a few breaks to rehydrate along the way.

And after all this, you can also experience Petra by Night – imagine the grounds lit by candlelight and the opportunity to listen to Bedouin music in this truly magical setting. 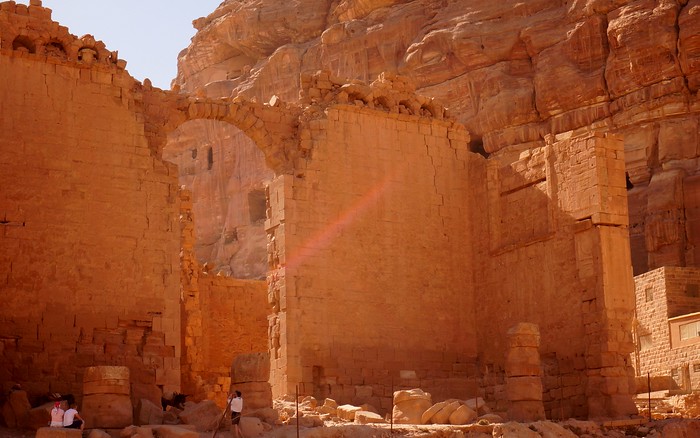 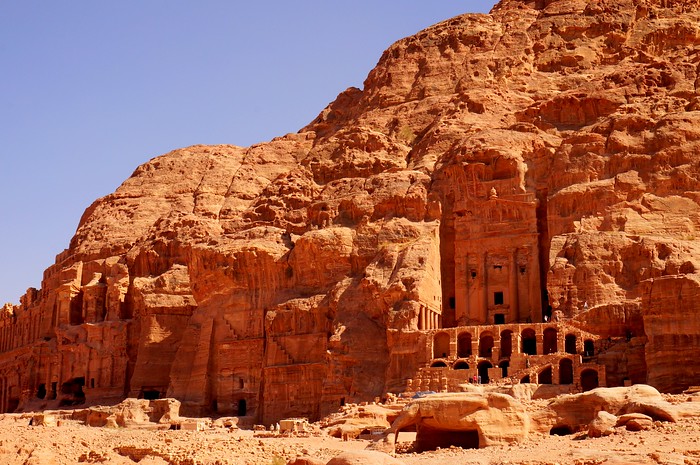 During my day in Petra, I managed to make it as far as the Cardo Maximus and the Great Temple – an area that was sprinkled with the ruins of Roman buildings that did not withstand the earthquakes this region experienced. I truly felt like I was walking through an archaeological excavation.

As we walked through this area, Mohammad pointed out the outlines of buildings and the shards of pottery on the ground that belonged to the various civilizations that passed through here – Nabateans, Greeks, Romans. He told us how during a previous tour he had found a large hand-painted ceramic just lying in the dirt; he carefully dug around it and lifted this ancient fragment, amazed that it was so well preserved considering it was covered by no more than a light layer of red sand. This piece was now in a museum, but he explained that there is so much work still to be done in Petra that archaeologists can hardly keep up.

This statement was further reinforced when I went for a walk later that afternoon and spotted locals selling shards of ancient pottery to tourists. I was slightly horrified that for a handful of dollars any tourist could walk away with a piece of Jordanian history to display back at home. Surely these pieces need to be in museums, but then again, when there is so much of it just lying in the sand, it’s difficult to protect. 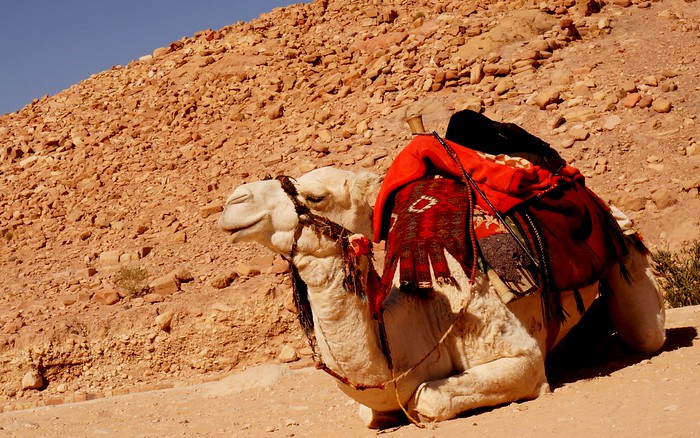 Petra is everything you’ve heard and more! If I can offer one piece of advice, it’s that you give yourself enough time to explore. Like I previously mentioned, I only had 1 day there, but I could have easily used 2 more.

Once you enter the city you’ll start feeling a bit like Indiana Jones and you’ll want to climb every mountain and explore every nook and cranny – give yourself enough time to do so! 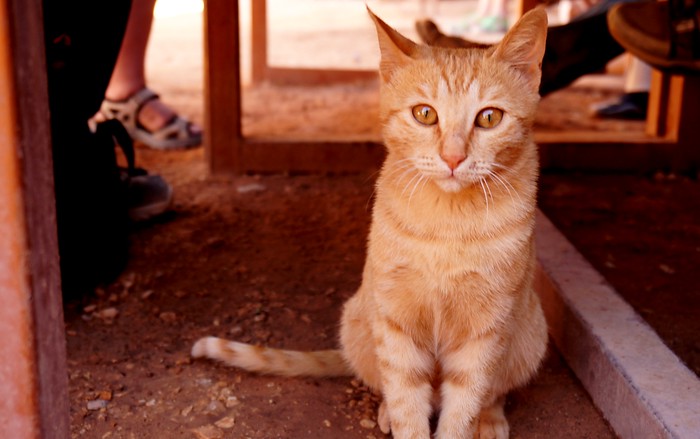 Have you been to Petra?
Was it everything you thought it would be?

For more info about travel in Jordan, you may want to read:

Destinations in Jordan, because there’s more than just Petra!

A Night at the Dana Biosphere Reserve