Australia is massive and there is no way you can cover it all in one trip unless you’re hiring a campervan and driving around the country for at least 6 months. Road trip! I didn’t have that kind of time so my recent 2 week trip was strictly focused on Queensland, and let me tell you, I still barely scratched the surface because it turns out Queensland is the second largest state in the country and that means it’s huge.

Starting in the north and working my way south, I managed to visit Townsville, Magnetic Island, Bowen, Airlie Beach, the Whitsunday Islands, and the Gold Coast, and today I wanted to share a few highlights from that trip in the form of 10 unique experiences:

There were two reasons why I wanted to visit the town of Bowen: (1) this is where they filmed Australia starring Hugh Jackman and Nicole Kidman, and (2) there is a little bakery that is said to make some of the best meat pies in all of Queensland!

While I couldn’t recognize any of the buildings as the backdrop of those used in the movie Australia (sadly, the set crew took it all away leaving zero evidence they had ever been there), I did manage to track down Jochheim’s Bakery.

Jochheim’s was one of the favourite dining spots while Australia was being filmed, particularly with Hugh Jackman. If you drop by the bakery you’ll be able to flip through a scrapbook that has newspaper clippings, thank you notes from the cast, autographs, and even photos of The Drover himself casually enjoying a meat pie in sweats and a baseball cap. Pretty cool for a small little town!

I arrived at Jochheim’s late in the afternoon just as it was about to close, which meant the Hugh Jackman Pie had already sold out (yes, they dedicated a pie to him!), however, I did manage to get my hands on a meat pie with mushy green peas. Delicious. This is the type of place where you want to come hungry and come early! 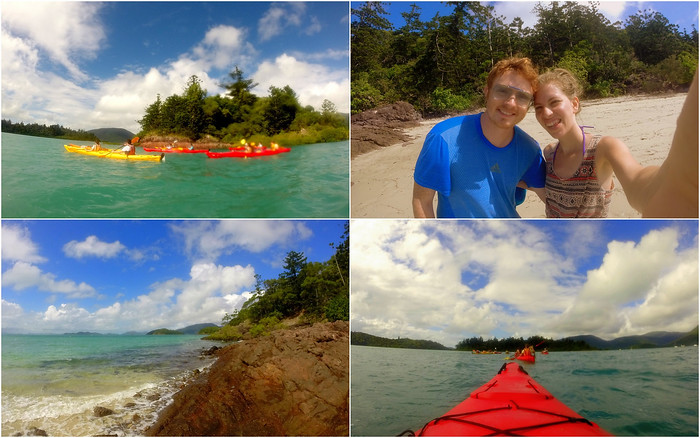 Going sea-kayaking around the Whitsunday Islands

Kayaking is a fun sport that I only picked up over the past year and a half of travel. I first got to try it out in Halong Bay and then again in the Finnish Archipelago, and now I am hooked!

While visiting Airlie Beach, Sam and I went kayaking with Salty Dog Sea Kayaking on their Half Day Snorkel and Turtle Tour. Unfortunately, it happened to be a really windy day and the seas were quite choppy, which meant we were unable to reach our final destination to go snorkelling with sea turtles. However, we ended up making our way to a much closer island and enjoying a picnic and some beach time instead. I didn’t get a turtle selfie to boast, but it was a beautiful day out in the water so I can’t really complain.

Oh, the Whitsundays! What can I say about this place that hasn’t already been said through the photos above. I mean, just look at that water! While I would have gladly spent a full week island hopping and camping around the group of islands that make up the Whitsunday Islands National Park, I simply didn’t have that kind of time.

Instead, I got to experience the islands by going on a daylong sailing trip aboard the Derwent Hunter AND we even had dolphins join us for the ride! Aside from the spectacular views and the delicious food, what I really enjoyed about this outing is that it was very relaxed and everyone aboard was really friendly and chatty. By the end of the day everyone was laughing, socializing and enjoying drinks together and that atmosphere made it a very memorable trip. 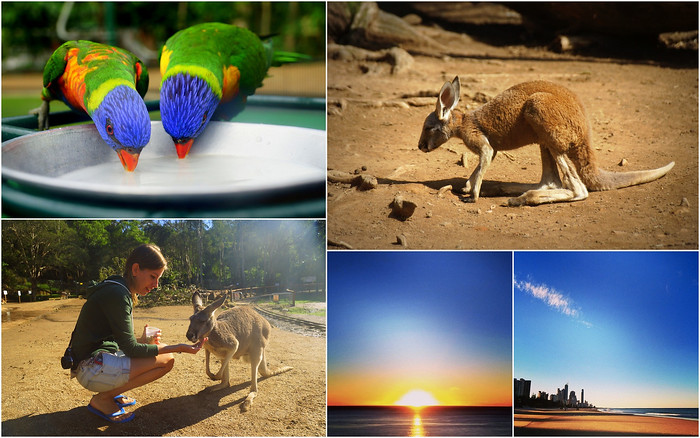 I was excited to visit the Currumbin Wildlife Sanctuary, mainly because after a week in Australia I still hadn’t seen a single kangaroo! That needed to be remedied.

I arrived at the sanctuary bright and early at 8 a.m. and the first order of business was to feed the lorikeets. These little rainbow coloured birds knew it was breakfast time and they were anxiously waiting in the surrounding trees for their meal to be dished up. I was handed a bowl with milk and honey, and before I knew it the lorikeets were landing on my arms and on my head.

From there I took a walk through the park where I got to meet emus, cassowaries, Tasmanian devils, koalas, and dingos. And then I spotted the ‘roos! I know some Aussies consider these creatures a bit of a pest, but for a Canadian who has never seen a kangaroo before this was pretty exciting – I still can’t get over the way they hop around using their giant hind legs, it’s just so amusing! 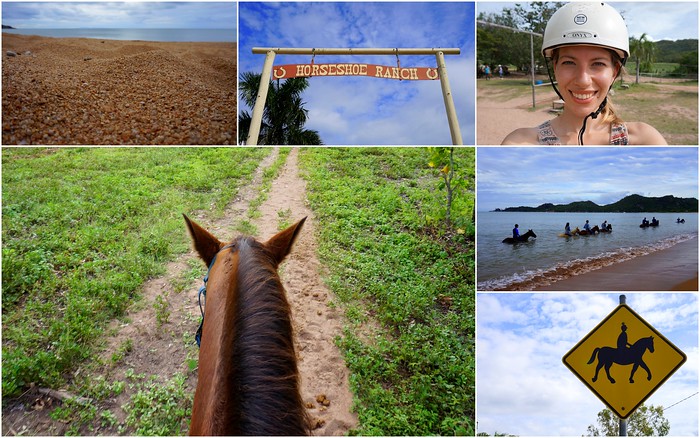 Taking horses for a swim on Magnetic Island 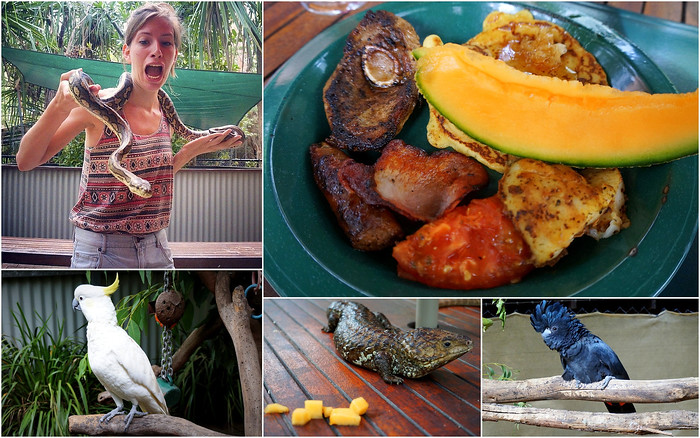 Feasting on a Bushtucker Breakfast

Bush tucker is the name for ‘bush food’ that was consumed by the Aboriginees, and this particular Bushtucker Breakfast at Bungalow Bay Koala Village gave me the chance to try some of these dishes with a bit of a modern culinary spin. There were lots of grilled meats and veggies, plus we got to get up close with koalas, lizards and pythons. Yes, pythons!

Catching a beach sunrise in the Gold Coast

One of the things I most enjoyed about my stay at Peppers Broadbeach on the Gold Coast were the sunrises. Because the property was right on the waterfront and directly facing east, I got to watch some of the most spectacular sunrises I have ever witnessed. I am normally not a morning person, but this warranted being out of bed at 6 a.m. Wouldn’t you agree?

Hiking up Castle Hill in Townsville

My very first morning in Australia started with some vigorous exercise in the form of a hike up Castle Hill. At 286 meters, this pink monolith dominates the Townsville skyline and also offers great views of the city below.

If there is one thing I learned during that hike, it’s that Aussies are really fit! Maybe it was the jet lag or maybe I’m just in bad shape, but I thought I was going to pass out on the way to the top! Meanwhile there were moms pushing babies in strollers, friends walking their dogs, and girls sprinting up with their headphones on – all while looking very stylish in their best athletic gear. They put me to shame!

Challenging some serious waves on the Ocean Jet

That’s the oh-mee-gawsh-I-can’t-believe-I-survived face. Riding the Ocean Jet was easily one of the scariest things I did in Queensland. This boat is nicknamed the roller coaster of the sea and it really lives up to its name.

We got strapped into race car seats, made our way out to the Pacific Ocean with the music blasting, and then it was time to do what this boat does best – crush into waves and do 360 degree spins that had my head, arms, and legs flailing from side to side.

Sam loved it! I was terrified and trying not to lose my Mexican burrito breakfast…but I have to admit it was a little bit fun. If you’re a thrill seeker this is definitely for you!

Having some fun sampling Aussie snacks

One one particular rainy day Sam and I took to Twitter and Facebook and asked anyone and everyone to share their favourite Aussie snacks with us. Comments poured in and then armed with a lengthy list we made our way over to the supermarket to try and find as many of these items as we could.

We picked up all sorts of snacks including Shapes, crackers that are shaped like Australia; Cherry Ripe, a candy that surprisingly tasted more like coconut than cherry; Chicos, little black candies that come in the shape of babies (a little weird!); Freckles, little chocolates covered in sprinkles; Lamingtons, a fluffy sponge cake coated in chocolate and then covered in shredded coconut; Violet Crumble, a chocolate bar with a toffee honeycomb centre; and yes, even Vegemite! As you can see in this video, there were a few clear favourites as well as some questionable items…

And that sums up my time in Queensland!

Queensland is a big place.
Have you been there?
What were some of your favourite things to do?