I have been back in Canada for a few weeks now, enjoying family time, catching up on sleep, and also thinking back on the past 15 months of my life. When I first moved to South Korea as an English teacher I wasn’t sure I would last more than 6 months, but then I ended up staying a full year and subsequently embarking on my lengthiest trip to date – 15 months to be exact!

I still have plenty left to write about this great adventure, however, since I’m in the mood to contemplate and reminisce, here are  some of the things I have learned over the past 15 months of travel: 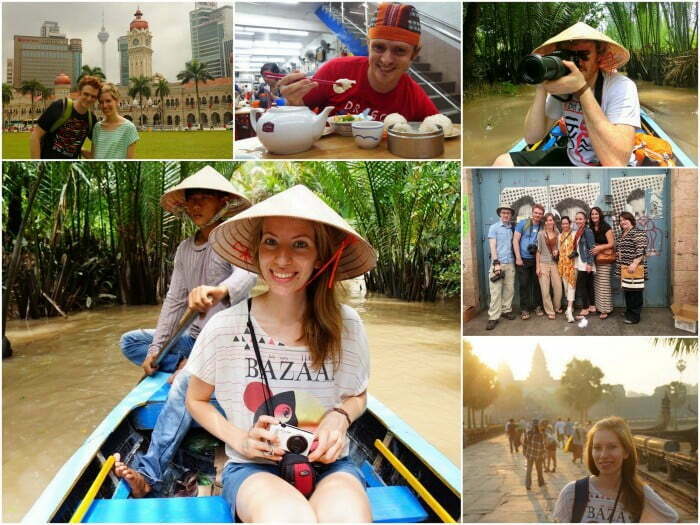 (1) Just because you’re a backpacker doesn’t mean you have to carry a backpack.

I would not travel for 15 months with a backpack ever again. It’s not like my backpack was even that heavy – I only had a 60L and meanwhile I encountered other girls hauling around 80L – however, I think it’s unnecessary to carry all that weight on your back! My logic behind getting a backpack was that I would be walking through crowded markets in Asia and uneven cobbled streets in Europe, but in reality, wheels would have been fine! I’m heading out on another little adventure in just a couple of weeks and this time my roll along suitcase is coming with me!

(2) Crossing the street in Asia is an art form.

I spent the last weeks of my trip travelling in Europe and I was shocked every time a car would stop to let me cross the street. If you’ve travelled around Asia for a while you’ll know that crossing the street is a bit of an acquired skill. In Saigon I had to just step into oncoming traffic, walk at a slow and steady pace, and hope the scooters would swerve around me. In Chiang Mai vehicles were always running the red light so I had to stick out my hand and glare at drivers for them not to run me over. And in Hong Kong I found safety in numbers; you can’t run over a swarm of pedestrians even if the light has just stopped flashing green.

When I first set foot in a food market in Malaysia I noticed that there were ‘fried carrot cake’ signs everywhere. Not being one to shy away from sweets, I decided to order a portion. What I received neither looked like cake nor tasted like carrot. As it turns out, fried carrot cake is actually a type of stir-fry dish made with white radish. Very tasty, just not when you’re craving something sweet.

(4) Food poisoning strikes in the least likely of places.

During my 15 months of travel, I never ever got food poisoning from eating street food. The culprit was usually a favourite restaurant that I had frequented many times before and it always came as a shock. When I first set out travelling people told me, “Stay away from ice cubes. Don’t eat fresh vegetables. Don’t eat anything that has been washed with tap water…” As it turns out, I did all those things and I was fine. My rule of thumb when eating street food is: go where the locals go (they know where to find good food), and eat at stands that look busy (that way you know the food is being freshly made to keep up with the demand).

(5) Sometimes it’s worth splurging for comfort.

Ahhh, travel budgeting. A backpacker’s dilemma – do you want to save a dollar wherever you can so that you can travel longer, or are you willing to pay a little extra for your own sanity? This trip taught me that paying a few extra dollars can have a huge impact on my mood and the way I experience a destination. The lesson? Sometimes it’s worth skipping out on the $1 train with the hard metal benches, no AC and dirty diaper under the seat. Yes, that happened and it was 5 hours of agony.

(6) Always know when your passport expires.

Aherrrm, we had a little incident earlier this year that we can all laugh about now, but which caused a little meltdown at the time. We were travelling in Thailand with Sam’s parents and a few of their friends, when a few days before there was a flight to catch Sam’s dad realized his passport had less than 6 months of validity left on it. Most countries don’t let you enter with less than 6 months on your passport, so that meant he wouldn’t be allowed to board his onward flight to Cambodia… Every traveller’s worst nightmare! We had to book him on the next domestic flight to Bangkok, where he was thankfully issued a temporary passport to continue on with the rest of trip. Yikes!

(7) On that note, always check if you need a visa because sometimes the least likely of countries actually require them!

Sam and I were having dinner with a group of bloggers in Bangkok a few weeks before travelling to Australia when fellow blogger Ian asked us, “So you guys got your visas?” We stared at him blankly. “Pfff, visas? We’re Canadian, Australia is Commonwealth. We don’t need any visas…” Ho-ho, wrong! As a fellow Canuck, he had made the same mistake before heading out on his trip to Australia, and he’d only learned about the requirement when he was at the airport trying to check in. He was able to get one last minute and board his flight, but that’s not the kind of thing you want to discover at the check-in counter.

(8) The ‘touristy’ attractions are often worth visiting.

Some of the highlights from this incredible 15 month trip included watching the sunrise over Angkor Wat, sailing aboard a junk boat in Halong Bay, setting foot inside Hagia Sophia in Istanbul, coming face to face with the Lost City of Petra, rafting down the Li River in Yangshuo where the landscapes looked straight out of Avatar, and many more. All of them ‘touristy’, yet no matter how crowded these places may be, they still take your breath away!

(9) That island paradise won’t always be what you expect.

Prior to travelling to Thailand I idolized Phuket. Television and Google Images had fed me a steady stream of pristine beaches, crystal clear waters, and not a soul in sight. Imagine my surprise when I arrived in one of the seediest islands I have ever set foot in. Walking through the town I was met by women trying to lure my boyfriend into massage parlours even though I was standing right next to him, men trying to hand me flyers to ping-pong shows (gross), and a steady stream of drunk backpackers wearing far too little clothing. There are nice islands in Thailand, but I can’t say Phuket is one of them.

When you’re going on a short 1 week trip you usually want your schedule to be jam-packed with sightseeing and fun activities; the “so much to do, so little time” mentality works in this scenario. However, when you’ve been at it for months you start to crave a slower pace. That’s how I ended up hanging out in Chiang Mai for 3 months and then renting an apartment in Berlin a few months later. It’s okay to slow down and re-charge.

(11) Travelling as a couple will bring you closer.

Think about it – often times it’ll just be you and your partner in places where locals don’t speak your language. You’ll be spending a lot of time together, you’ll face challenges and have to work as a team to solve them, and then there’s the matter of getting sick. Nothing brings you closer in your relationship quite like hearing the other person puke their guts out at 3 in the morning after eating a funky enchillada…

(12) Sometimes you’ll have no idea what is going on around you.

I remember while staying in Chiang Mai, there would always be these random parades down the street. This one particular day I heard music and drumming approaching so I went out to see what was going on. There was some kind of parade with a family shaking a tree down the street….I know, it sounds so weird, and to this day I wonder what was going on. You won’t always get answers to your questions and sometimes all you can do is sit back and observe culture unfold in front of you.

(13) Travelling is not that difficult and it’s not that extraordinary.

What I mean by that is that I am doing something that you can too! Travel is not that scary and far-fetched. It may seem that way before you jump into it, but don’t worry, you’ll get the hang of it. I am in no way a brave adventurer! Sure, I like travelling to far-flung places, but there are countless people my age doing the same thing.

(14) The people you meet along the way are what makes your trip memorable.

If there’s one thing this trip helped reinforce it’s that I love Love LOVE travel! I love the foreign, the unexpected, the challenges, and the surprises. No matter where the road leads, I want to continue experiencing new places and living overseas for a long long time.

What lessons have you learned on your travels?
Feel free to share in the comments below.