Jordan was a country full of highlights. Just when I thought tomorrow couldn’t possibly top what I had experienced that very day, I found myself coming face to face with Petra, or camping with Bedouins in the desert, or floating like a cork on the Dead Sea.

Is there no limit to Jordan’s surprises?!

Yet another highlight came in the form of a visit to the Dana Biosphere Reserve. The Dana Biosphere is Jordan’s largest nature reserve and it has an incredibly rich biodiversity. Most of the reserve is accessible only on foot, so if you’re looking to get off-the-beaten-path, this is as remote as it gets.

I stayed at the Feynan Ecolodge during my visit, and it proved to be a great way to explore the area. They gave us the freedom to either go hiking on our own, or to join one of the local Bedouin guides for a meaningful look at life in this part of the world.

My one day at the Dana Biosphere Reserve proved to be all too brief, but here’s a look at some of the highlights:

A candlelit welcome at the Feynan Ecolodge

It was a long day of travel journeying out to the Dana Biosphere Reserve, and it involved travelling by bus, then switching over to pick-up trucks as the road turned into a gravel path, and finally using our own two feet to reach our accommodations for the night.

I have to say, our arrival was timed perfectly! We stopped off to enjoy a cup of sweet tea just as the sun was setting, and by the time we reached the ecolodge, it was shortly after dusk. It was an unforgettable sight coming around the bend with our flashlights and seeing our path lit by candlelight.

An astronomy lesson on the lodge’s rooftop

The Dana Biosphere Reserve is a place where the sky looks as though someone spilled a bottle of glitter. The stars glow and they glow bright.

After a candlelit dinner that evening, we all made our way to the rooftop to gaze at the night sky. Padded mats and pillows were readily available and everyone found their own little spot to take in the beauty and catch a glimpse at a shooting star. What I wasn’t expecting was to also get a fascinating lesson in astronomy.

Having spent most of my recent years living in cities where the bright lights pollute any chance of spotting major constellations, I don’t have a strong foundation when it comes to sighting Pisces or Virgo, however, our Bedouin guide Ali wowed us with his knowledge of the stars above.

Eager to hear the names and the mythical stories behind each group of stars, we gathered around him and his telescope as he brought the night sky to life. There were tales of the beautiful queen of Cassiopeia, the winged horse known as Pegasus, and the chained lady also known as Andromeda. His knowledge of the stars was astounding.

Falling asleep to the sound of the howling wind

That night I had one of the soundest sleeps of my life. Since the ecolodge doesn’t have electricity in the rooms (except for the bathroom), we called it an early night. I arranged the white net around my bed to keep any bugs out, slipped under the fluffy duvet, and fell asleep to the sound of the howling desert wind within minutes. I completely missed the early wake-up call to go on a sunrise hike and didn’t wake up until the sun was streaming in through my window. 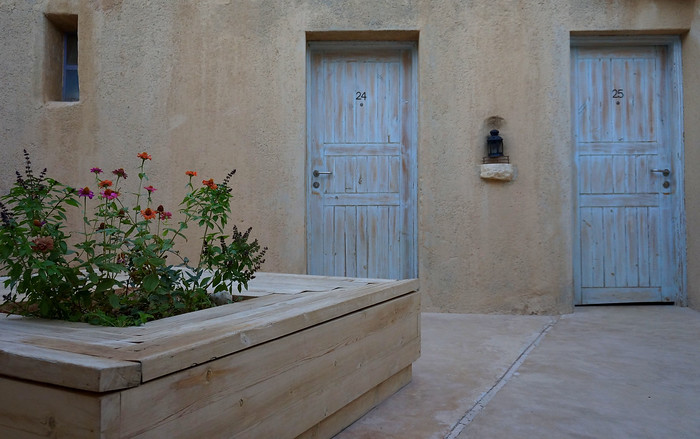 The following morning I had a very entertaining al fresco breakfast with a few unexpected guests. It seems I wasn’t the only hungry one at the lodge. After serving myself a spread of flat bread, hummus, and various cheeses and jams, I grabbed a seat at the table where I soon had company in the form of goats.

Yes, a herd of goats mulled around in the foreground, trying to steal garbage bags from the kitchen before settling on tree branches. 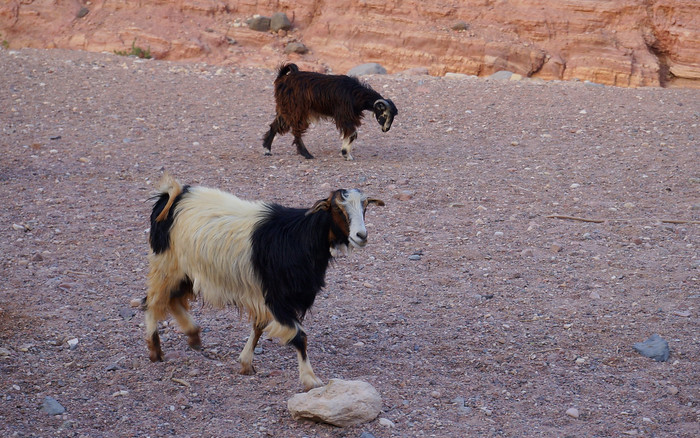 And then a family of kittens approached. Knowing they are small and cute, the kittens worked their charm on me and inched their way forward. First a meow in the distance imploring for a bit of food, then approaching the table with a little less hesitation, and finally jumping up on my placemat and helping themselves to my yogurt while I stepped away to get a glass of juice.

Yes, these were the culprits! How do you shoo away a face like that?

A morning spent learning about the Bedouin way of life

What I enjoyed most about my stay at the Feynan Ecolodge, however, was the opportunity to learn about the Bedouin way of life.

The Feynan Ecolodge has a strong focus on sustainable tourism and that means working closely with the local community. So, in the morning, our guide Suleiman walked us over to his father’s tent. As we approached, he taught us that in the Bedouin culture you are allowed to drop by unannounced, however, you must cough outside the tent and make your presence known so that those inside have a few moments to, you know, get decent. 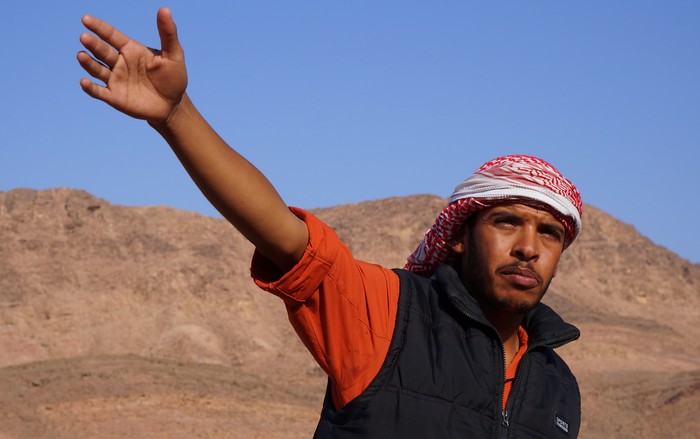 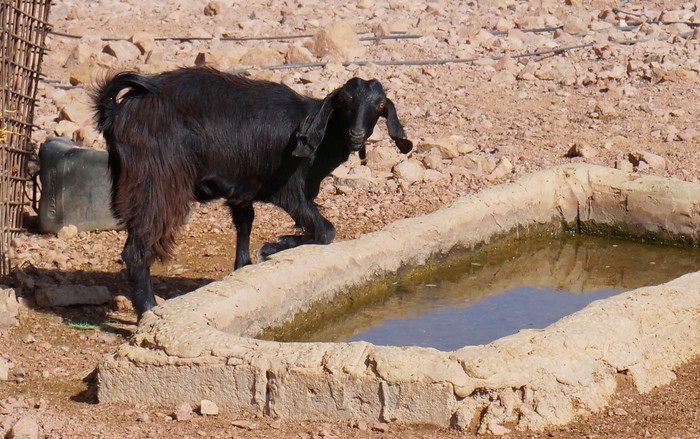 We also learned that Bedouins will extend their hospitality to strangers for up to 3 days – no questions asked. I can’t think of many Western cultures that would welcome strangers with open arms, however, in the harsh desert climate, this type of hospitality is the only thing that can give an unfortunate stranger a fighting chance. 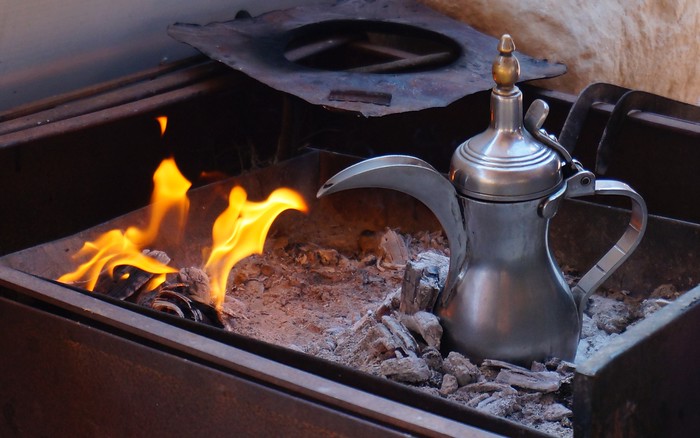 Once inside the tent, we sat down on the carpet, drank a few cups of tea and coffee, and shared a loaf of bread with a delicious dip cooked by the family’s matriarch. Then, Suleiman invited us to ask him and his family any questions we had about their way of life. At first we just looked at each other sheepishly, but once the questions started, you couldn’t keep anyone quiet. Our questions covered everything from daily life in the desert (it’s a lot of hard work) to the dating life of a modern day Bedouin (the answer to that one is Facebook!). It was a fascinating conversation to say the least, and with that it was soon time to leave.

What made my visit to the Dana Biosphere Reserve so special was the chance to discover this place through a local’s eyes. The Bedouins were the ones who guided us to the lodge on that first night, the ones who introduced us to the constellations in the sky, and then ones who taught us about their customs and traditions. And that’s why almost one year after my visit to Jordan, I’m still dreaming about the deserts, the music, and its people.

For more Jordan posts, check out:

Destinations in Jordan, because there’s more than just Petra

Petra: Journeying into the Lost City