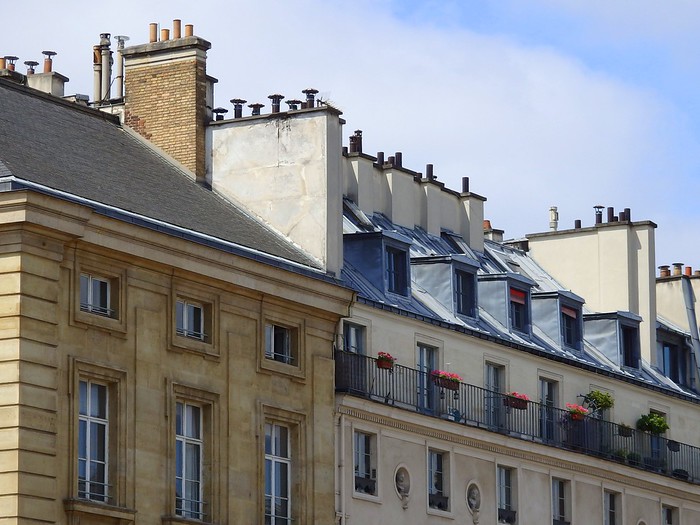 A few months ago Club Carlson invited me to come and experience one of their hotels as part of their #AroundTheWorldIn75Days campaign, which seeks to highlight their hotel properties around the world and showcase the adventures you can have in each destination. Since I was in the midst of planning a big European trip, and Sam and I had our 1 year wedding anniversary coming up, we chose Paris.

Tell any Parisian that you’re planning to visit during the summer months and they’ll shake their head in disapproval. This is when locals try to flee the city because it gets really hot, it gets really crowded, and it gets really pricey!

Of course, I hadn’t been to Paris in almost 8 years so I had forgotten all of these things. It wasn’t until Sam and I tried to go sightseeing that we both realized we wouldn’t be able to see Paris the traditional way. The lines to the Louvre, Notre Dame, L’Arc de Triomphe, the Catacombs, and just about any other major attraction in the city were astronomical, so we had a bit of an alternative experience in the city. Here’s what our time in Paris looked like:

Bois de Boulogne was once part of the royal hunting grounds, but these days you’re more likely to find people out for a jog or a picnic. Since the Parisian crowds were starting to get to us, one day Sam and I packed a picnic and headed out to the park for a bit of a quieter day closer to nature. We ended up finding a spot next to the lake where I feasted on macarons and Sam enjoyed his bottle of French wine. A dog also tried to steal my macarons while I was eating them – sneaky chien!

After our lunch we rented a row boat and Sam rowed me around the lake while I took photos of him struggling to work the oars. It was a pretty relaxing afternoon for me, but I think he walked away with sore arms in the name of love.

This month Sam and I celebrated out 1 year anniversary and since we both LOVE food, we decided to spend the day eating well!

We managed to find a Korean restaurant called Bibimbap that had been awarded the Michelin Bib Gourmand, an award for “exceptional good food at moderate prices”. Since we met in South Korea, we couldn’t really think of a better restaurant to celebrate so we tracked the place down for some of that hot pot rice. The food was absolutely delicious and we left feeling beyond satisfied.

Then for dinner we had an indoor sushi picnic (it was raining out) and topped that off with some treats from the local patisserie. Picture a giant macaron with raspberries and an exquisite slice of lemon merengue pie. My taste buds were ecstatic.

A day trip to Versailles 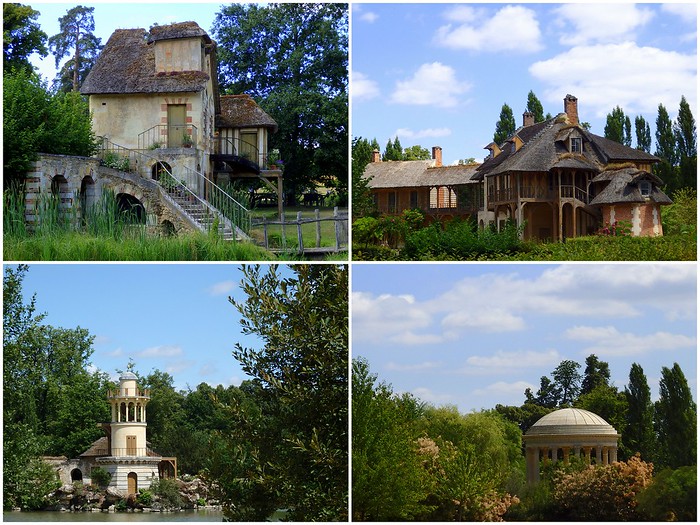 Seeing Versailles by bicycle was a dream. The palace itself was crowded beyond belief, especially the Hall of Mirrors and the King’s and Queen’s State Apartments, but cycling around the parks with Fat Tire Paris was the perfect way to do it.

First off, there’s no way I would have been able to cover that much ground on foot, because the place really is massive. Also, while it was nice to visit the Petit Trianon, the Queen’s Hamlet, and go inside the Palace, I think the parks and gardens are what really shines. I enjoyed biking down the tree-lined boulevards, eating a picnic lunch on the lawn, and watching couples row on the Grand Canal.

Joining in the Bastille Day Celebrations 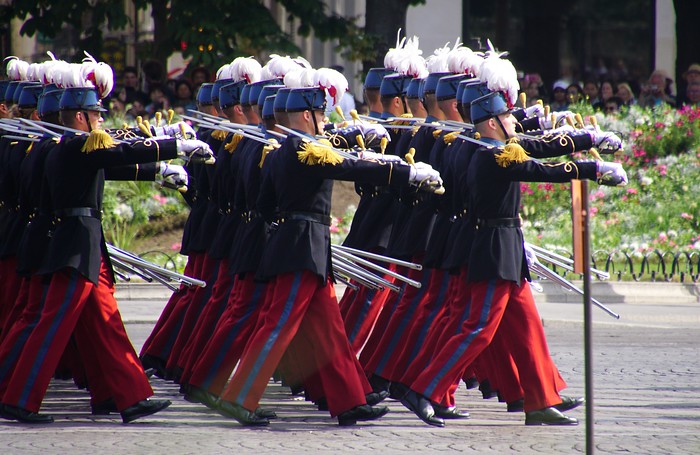 Last time I was in Paris I missed the Bastille Day celebrations by only a day, so I was pretty excited to be in town for the biggest holiday of the year. Bastille Day, or Quatorze Juillet, celebrates the storming of the Bastille Fortress in 1789 and the start of the French Revolution, so it’s a pretty big deal.

On the morning of the 14th, Sam and I made our way down to Champs Elysees to watch the military parade. We arrived there about a half hour before the parade was scheduled to start but that was not early enough because the places was packed! Locals had even brought lawn chairs and step ladders so they could enjoy the show.

We then had a leisurely day in the city, and watched the fireworks over the Eiffel Tower from our hotel room – the perks of being a bit further from the action are that you get some spectacular views.

Wandering along the banks of the Seine at night 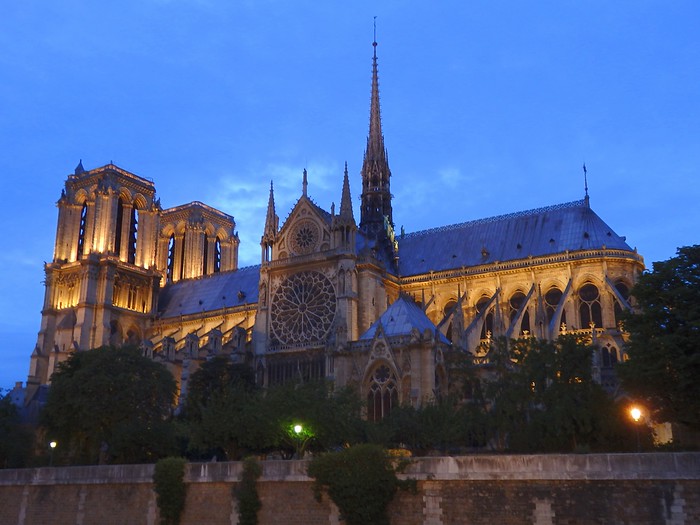 During the height of summer, the sun doesn’t set in Paris until 10:00 p.m. That makes for some long evenings and everyone likes to make the most of them.

The liveliest place of them all is Port Saint-Bernard where crowds gather nightly from June until the end of August to dance on the shores of the Seine. We got there just after sundown and there were several dance circles already buzzing with action. You could choose from tango, salsa, merengue and more.

Who needs nightclubs when you can dance on the riverbanks of Paris?

A quiet stay in Boulogne-Billancourt 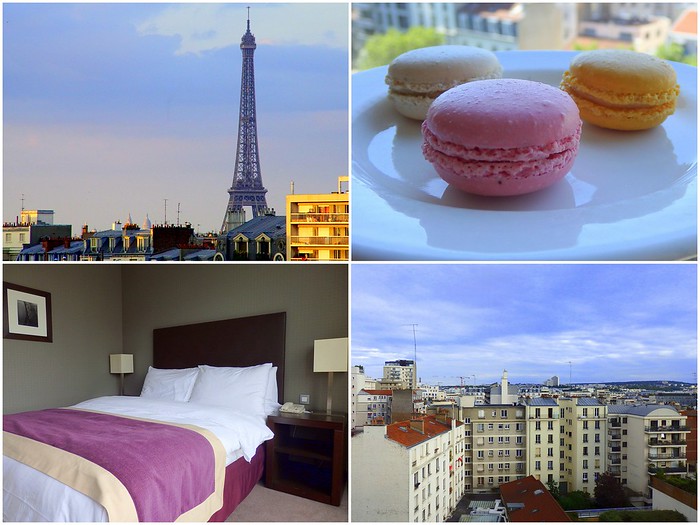 Now for the accommodations. While in Paris I stayed at the Radisson Blu Paris Boulogne, which is located in Boulogne-Billancourt, one of the suburbs of western Paris. This is more of a business district so it’s a bit unusual for travellers to stay here, but my top two choices in the heart of the city were already fully booked – that’s summer in Paris for you!

However, Boulogne-Billancourt proved to be a nice destination. We had great views of the Eiffel Tower and those iconic blue rooftops and tiled chimneys. We were also a skip and a hop away from Bois de Boulogne, which as I’ve already mentioned is a great escape from the city. Plus our area had lots of great little restaurants including Portuguese, Vietnamese, Turkish and Japanese, all along the same street.

One of my favourite things about the hotel was that they welcomed all their guests with macarons – perfect for this sugar lover! Another thing that made this place unique is that the hotel has it’s own vineyard – pretty cool for a hotel in the middle of the city.

How would you spend summer in Paris?