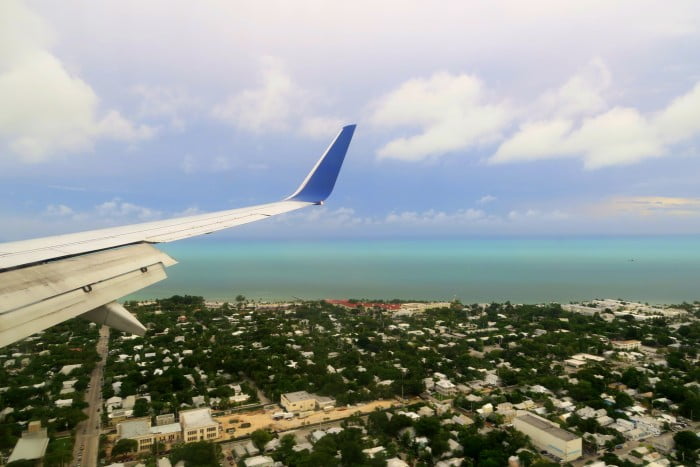 My recent trip to the Florida Keys was a much welcomed retreat from wintry Canada. For a few short days I traded my winter boots for sandals, my touque for a straw hat, and my wool leggings for shorts. I had a total of 5 days in the Florida Keys and this turned out to be the perfect amount of time to familiarize myself with this chain of islands that stretch southwest of Florida and bring you within a hop, skip, and a jump of Cuba. Here’s a little look at some of the places I visited and the things I got up to on the journey between Key West and Key Largo:

When I think of Hemingway, I usually picture him living it up with the Lost Generation in Paris or drinking mojitos in Havana, but did you know that he also lived and did much of his writing in Key West?

While you can walk around the Hemingway Home on your own, I would highly suggested joining one of the guided tours (it’s already included in the ticket price!), because you’ll get to hear so many stories about the life of Ernest Hemingway. The tour lasts about 30 minutes and it’ll cover everything from his favourite watering hole in Key West to his love for refereeing boxing matches in his own backyard. My favourite part, however, was seeing his writing studio located atop the carriage house behind his home. It was here that Hemingway wrote 70% of his life’s works in a matter of 9 years!

If you’re a Hemingway fan, this is one place you won’t want to miss. Same goes for cat lovers; today the house is home to 54 polydactyl cats which are all descendants of his original pet cat Snow White (and yes, this requires a full time vet!)

Here’s a look at some other spots around Key West associated with Hemingway.

There’s an Instagram hashtag I really enjoy called #SeeMoreSunsets and no place embodies this better than Key West. Every afternoon just before the sun is about to set, locals and visitors gather down by Mallory Square to watch the sun put on a show. All along the waterfront you’ll find street food vendors selling popcorn and chips with guacamole, performers hoolah-hooping and juggling swords, and artists selling their handmade jewelry and paintings. It’s a nice way to unwind and bid farewell to another day while the sun sets over the water.

My first night in the Florida Keys I went to The Stoned Crab, where I ordered (what else?), stone crab! This was my first time trying crab and I was pleasantly surprised. I’ll admit it took quite a bit of effort to crack the claws and get at the meat, but once I did and I drizzled a bit of lemon juice on top, it was delicious.

After having stone crab as an appetizer, I ended up ordering a 3-tiered platter known as The Big Heat, which was overflowing with seafood. The Big Heat included one platter with lobster and crab legs, a second platter with mussels and grilled corn, and a third platter with shrimp, fish sticks, and calamari. The plan was to share it with the girls at my table, but we eventually had to admit defeat and pack it in a to-go box. Portions in the United States are more than generous! 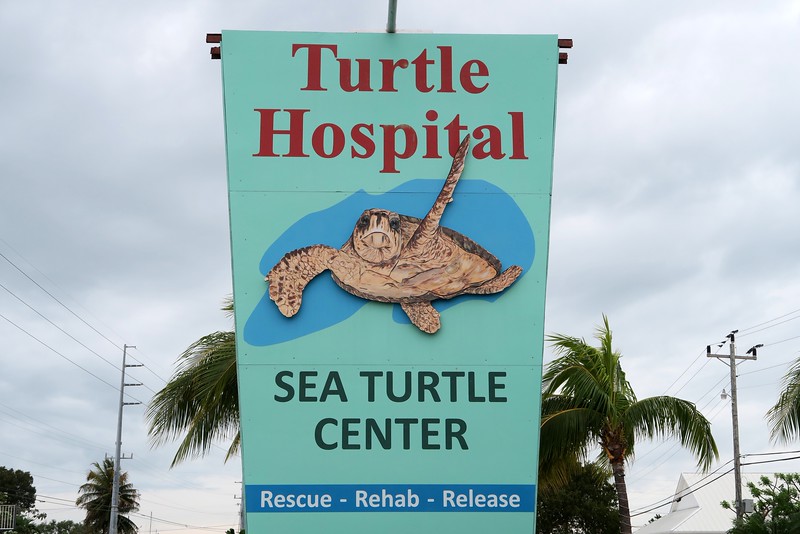 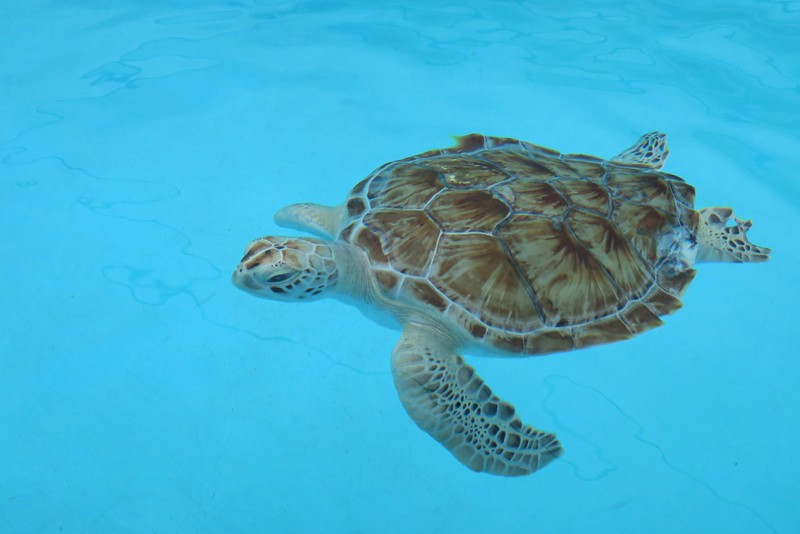 Another place that I would recommend visiting if you find yourself in the Florida Keys, is the Sea Turtle Hospital in Marathon. The hospital’s motto is “Rescue. Rehab. Release.” and they have a dedicated team of people doing all they can to help sea turtles who have been caught in fishing lines, trapped in rope entanglements, suffered shell damage in boat collisions, or ingested foreign materials like plastic bags, fishing lines, and hooks. They also perform surgeries to remove debilitating tumors, called Fibropapilloma, that affect over 50% of the sea turtles in the Keys and around the world. Not only does the hospital do a great job taking care of the sea turtles, but they’re also trying to educate the public and make people aware of their own ecological footprint.

John Pennekamp Coral Reef State Park is located in Key Largo and it is the first undersea park in the United States. I took a boat tour aboard one of the glass-bottomed boats where you’re supposed to be able to see the corals, but it wasn’t quite the same as snorkelling. Also, if you’re prone to motion-sickness like me, this isn’t the best option since looking down at the glass can make you a bit dizzy (and queasy), so if I were to do it again, I’d probably join a snorkel tour instead. The park is home to the “Christ of the Deep” underwater statue, which is found in the Key Largo Dry Rocks Reef, so that’s another reason to choose snorkelling over a boat trip. 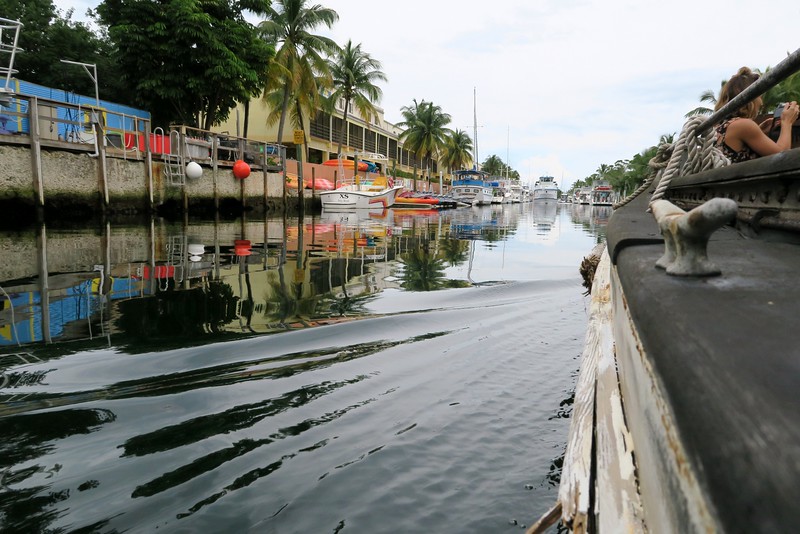 Take a boat trip aboard The African Queen

The African Queen is the name of the 1951 film starring Katharine Hepburn and Humphrey Bogart, and it is based on the C. S. Forester book by the same name. The movie is set in East Africa at the beginning of World War I, and it tells the story of a brother and sister missionary duo. After the brother dies, the sister, Rose, forms an unlikely relationship with Charlie, a rough-around-the-edges boat captain who has a little steam boat used for delivering mail and supplies. Together they decide to do their bit to help the war effort, so they take the steam boat and convert it into a torpedo boat to attack the Germans.

Now that you know the plot of the movie, let’s get back to the main point: The African Queen is currently sitting in a little harbour in Key Largo! The boat has had a long history; prior to being in the film, it was used to shuttle cargo, missionaries and hunting parties between the Belgian Congo and Uganda border. But today The African Queen has been restored and she takes passengers on a slow journey down the Port Largo Canals and to the Atlantic Ocean. 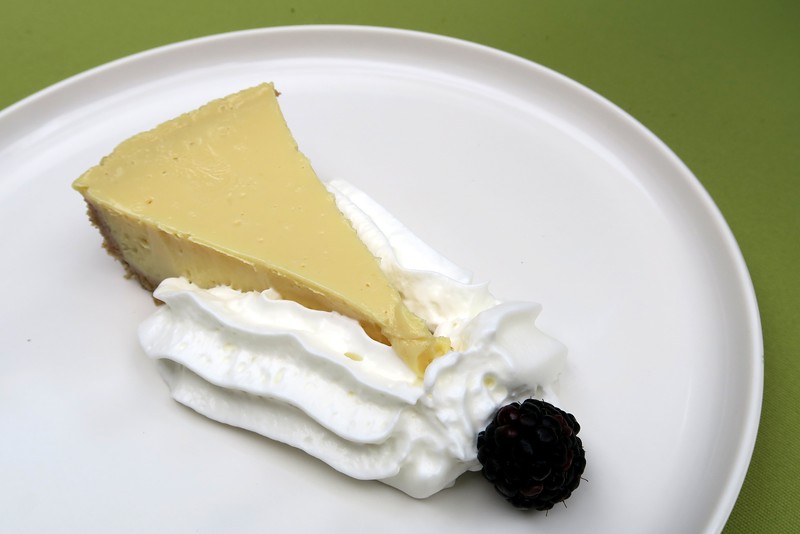 I’ve already written quite extensively about my love for Key Lime Pie, but I’ll say it again, if you find yourself in the Florida Keys, you need to sample some pie! There are so many different variations ranging from deep-fried pie to chocolate-dipped pie on a popsicle stick, as well as some more traditional recipes topped with meringue or whipped cream. So order some for dessert…or just have it for breakfast, lunch, and dinner like I did.

Feed the tarpon at Robbie’s Marina

Tarpon is officially the largest fish I have ever laid eyes on. This large, tropical fish can grow to be anywhere between 4–8 feet long and weigh anywhere between 60–280 lbs. And guess what? It likes to make it’s home in the Florida Keys.

Robbie’s Marina in Islamorada sells fish by the bucketload and you can walk out on the pier and feed the tarpon for yourself. It’s a bit daunting when you see the size of the fish, and it’s even scarier when you see them open their big mouths into what looks like a dark abyss, but it’s also pretty cool seeing them up close.

Just beware of the pelicans; they also like fish and they aren’t shy about it!

Chef Bobby Stoky’s restaurant Marker 88 is the place to go if you’re looking to sample some local cuisine. Having grown up in the Florida Keys, his recipes have been shaped by the dishes he ate as a child, and they feature local favourites like conch, lobster, yellow tail snapper and more. I had a delicious coconut battered shrimp as an appetizer, followed by a grilled ahi tuna with a wasabi aioli as a main. The only thing to keep in mind is that the portions here are massive, so if you want to sample a bit of everything it’s best to share a few dishes with friends.

Also, the night I ate at Marker 88 some of the actors from the TV series Bloodline also happened to be there. I’m not too familiar with the series (I clearly need to catch up on Netflix!) but some of the people I was dining with were super excited to get to meet some of the cast and have their photos taken together.

And lastly, if you happen to be there during the ‘winter months’ like I was, enjoy the tropical holiday season. It’s not very often that I get to see palm trees covered in sparkly Christmas lights, so I was pretty excited about this unique twist on the Christmas tree.

What would you do with a few days in the Florida Keys? 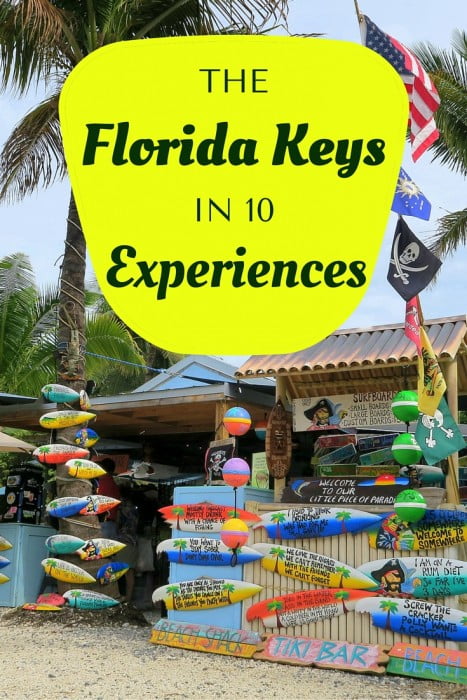 Many thanks to The Florida Keys and Key West for hosting me during my visit. For more travel inspiration have a look at their Instagram, Facebook and Twitter accounts.