If you’ve been feeling the travel blues, Valparaiso will wash them away!

I have to admit, I’ve kind of been dragging my feet a little bit these last few weeks. The fast travel pace was starting to wear on me and there were mornings when I was craving a little bit of time in front of my computer as opposed to a day filled with sightseeing in a new locale, but Valparaiso got me out of that slump in no time.

It’s kind of hard to want to stay indoors when the city is an explosion of colour splattered across every building. There are cool murals, bright walls, unexpected stencils, cheery window shutters, and fun mosaics to catch your eye at every turn.

Here’s a look at some of the pictures I took on that trip, as well as some ideas of things to do in Valparaiso if you ever end up in this bohemian port city! 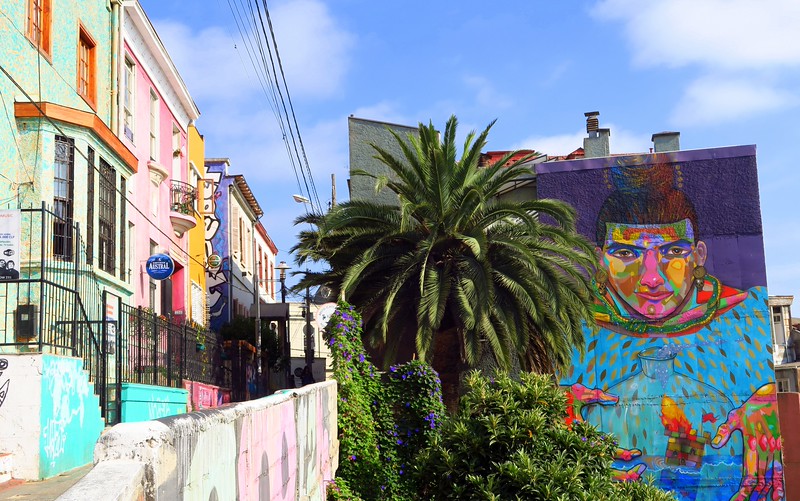 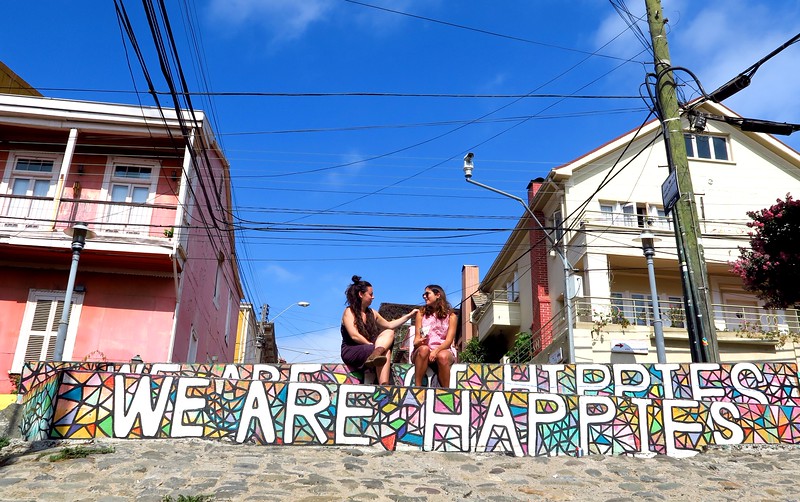 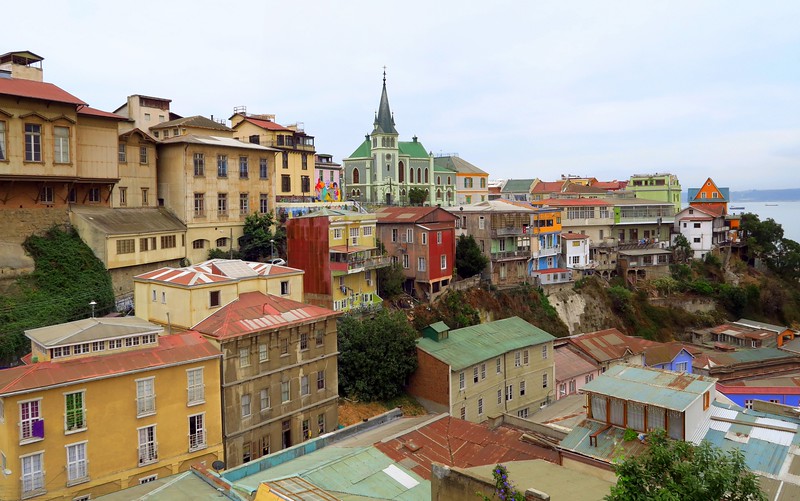 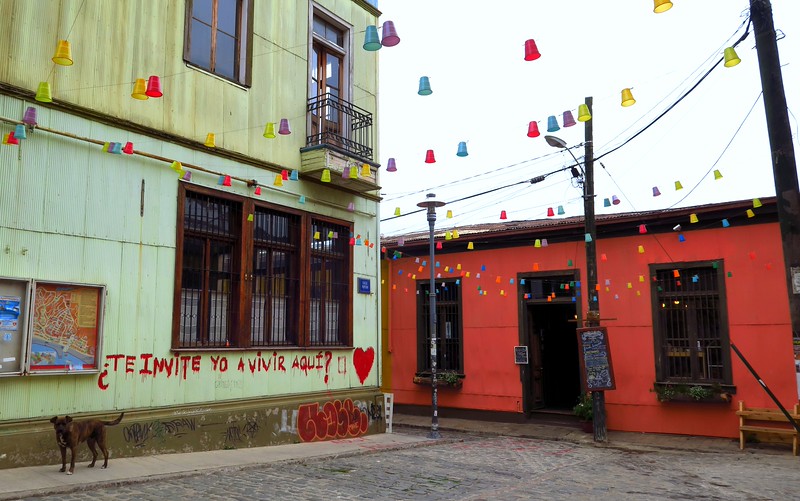 THINGS TO DO IN VALPARAISO

Start the day with brunch.

If you’re like me and you just can’t function before you’ve gotten some food in your system, then I recommend heading over to El Desayunador. They specialize in breakfast and meriendas (kind of like afternoon tea), and they also have some pretty nice cakes on their menu. FYI: In South America it’s perfectly acceptable to have cake for breakfast, so feast to your heart’s content!

Ride up and down the funiculars.

Valparaiso is a city made up of hills. Our guide told us there are a total of 42 hills (though some locals insist there are 45) and that means a whole lot of walking! To make getting around Valparaiso a little easier, the city has a series of ascensores or funiculars that you can ride for a small fee. The best know of these is Ascensor Concepción which dates back to 1883! It is the oldest one in the city and it’s a very rickety (albeit safe) ride. Another fun one is Ascensor Reina Victoria, which gives you that iconic Valparaiso postcard shot once you reach the top.

If you want to see the city, but you don’t quite know where to begin, I would recommend joining one of the free walking tours. There are 2 main companies that lead tours across the city and those are Free Tour Valparaiso and Tours 4 Tips. This is a great way to get some insider knowledge, familiarize yourself with the neighbourhoods, and track down some of the best street art in town. 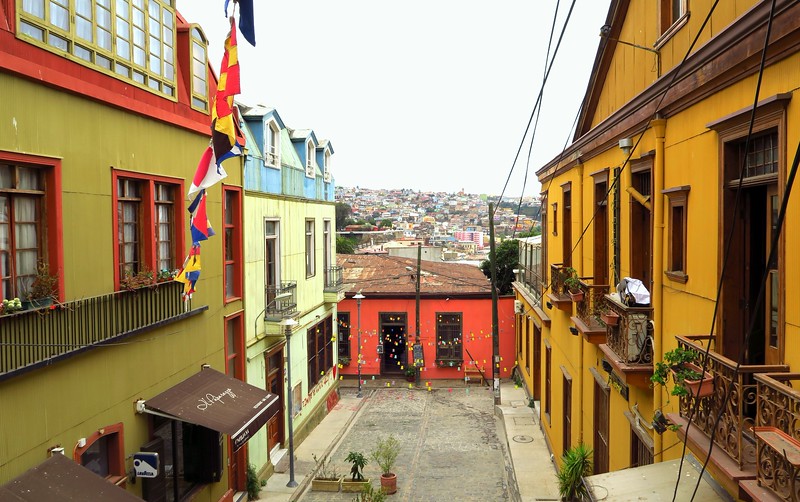 Go in search of street art.

This is the thing to do in Valparaiso! I personally think the best hills to visit if you want to see some cool murals are Cerro Concepción, Cerro Alegre, and Cerro Bellavista. The first two are the most frequented by tourists, and the third one is home to Museo a Cielo Abierto (Open Air Museum) which is a circuit featuring various murals.

Take a boat tour of the port.

Valparaiso is a port city so you can’t say you’ve visited until you’ve gone down to the harbour. Tours are 30 minutes long and they depart from Muelle Prat as soon as they get a boatful (usually around 25 passengers). The cost is 3,000 Chilean Pesos and you have a guide to point out the sights and talk about the history of the port. You go past giant container ships, tug boats, and navy vessels, so it’s a pretty cool outing.

Befriend all the dogs.

As a dog-lover who misses her grumpy old Lhasa-Poo back home, I’m always happy to come across dogs who are up for a little pet and a scratch, and the dogs in Valparaiso were just the friendliest! There are a lot of strays roaming the streets (locals seem to feed them and leave little containers with waters outside businesses and homes), and some of them will latch on to you and join you for a portion of your walk. We had a whole slew of ‘regulars’ who joined our free walking tour – they clearly knew the guide and that there was a stop at an empanada shop!

Pablo Neruda is Chile’s most famed poet and writer and he had 3 homes in Chile, one of which is in Valparaiso. Neruda’s home, better known as La Sebastiana, sits at the top of Cerro Florida, and let me warn you, it is a steep walk to the top. The home is 5 stories high and it has a pretty eclectic decor (Neruda was an avid art collector). You get individual audio guides inside that give you a glimpse at the writer’s life and his home. Admission to La Sebastiana is 6,000 Chilean Pesos per person. 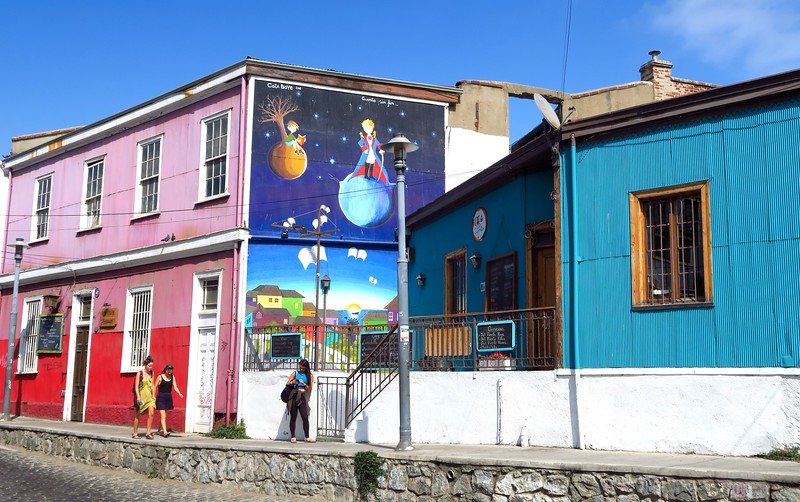 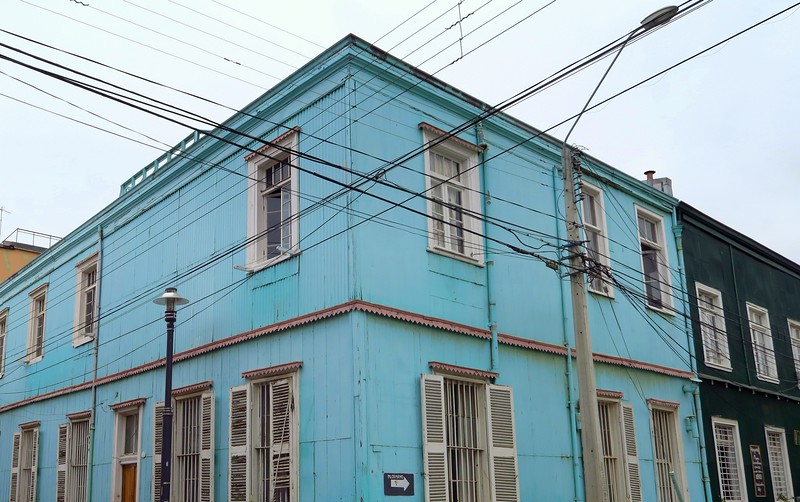 Run up the famed piano steps.

When it comes to Valparaiso’s street art, one of the best known pieces in the city is that of a staircase painted to resemble piano keys. “Everyone in Valparaiso has a Facebook profile pic on these steps!” our guide told us. These famed steps were painted by a musician who wanted to have a really cool album cover, so he decided to create some art of his own. Now here’s the kicker, these steps have been around for a few years and every once in a while they need a fresh coat of paint, so the artist was painting these steps a while ago, when the police caught him with a paintbrush in hand and had him arrested! It turns out that street art in Valparaiso is illegal (kind of hard to believe!) and if you’re caught painting a non-commissioned piece without permission, you can face a fine or even jail time.

Sample some of the best gelato in the world.

Emporio La Rosa is an ice cream shop located in Anibal Pinto Square. It boasts a bright pink sign that reads, “You are in one of the 25 best ice cream shops in the world,” so that might be reason enough to grab yourself a cone with a scoop…or three.

Check out the cool architecture.

Valparaiso has a really unique mix of architecture including a mish-mash of British and Eastern European influences. Some of the coolest homes to check out include Palacio Baburizza, a mansion built by a Croatian businessman that now houses the Fine Arts Museum; Casa Crucero, a five-story house built to look like a ship; and Palacio Astoreca, an imposing Victorian home turned boutique hotel.

If I had to describe Viña del Mar to you, I would tell you it’s Valparaiso’s polar opposite. Valparaiso is colourful, creative, and a little rough around the edges, whereas Viña del Mar is monochromatic, chic, and a bit wealthier. It’s a super easy day trip or a nice weekend escape if you have a bit more time. The two cities are only 8 kilometres apart and you can easily get there with the above ground metro system that goes along the beach. 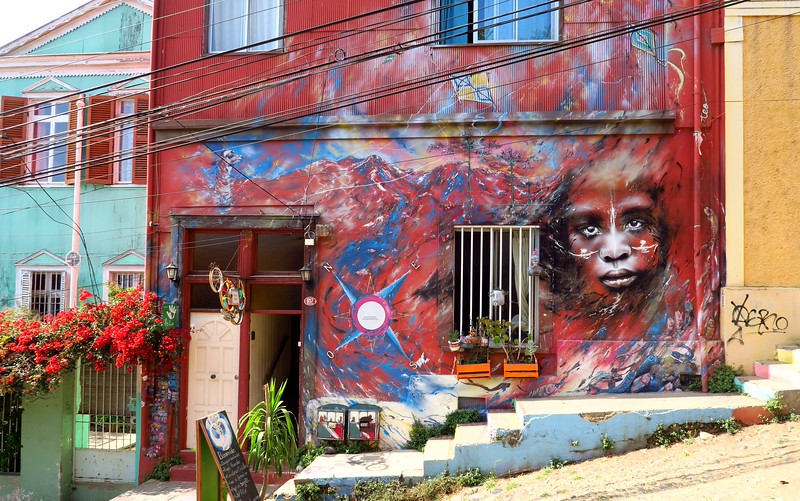 Valparaiso has a reputation for being a rough-and-tumble kind of place, but I do think some of the guidebooks and online forums paint a rather extreme picture.

We ended up staying in the plateau which is the commercial and business district of the city, and we did this after reading so many warning that the hills were not safe. In retrospect, I wish I hadn’t followed this advice. The plateau was fine but it also lacked the spirit that you see up on the hills. Certain hills may not be considered safe, but places like Cerro Concepción and Cerro Alegre cater to tourists and they have lots of cute B&B’s, cafes, shops and restaurants – and we met so many travellers staying there! They are not the secluded and dangerous neighbourhoods they are made out to be.

Just exercise caution: don’t walk down alleys or staircases if you can’t see what’s at the end, don’t wander around unfamiliar areas after dark, and don’t dangle a flashy camera around your neck (put it away when you’re not using it).

Where to stay in Valparaiso

Here’s a selection of properties to fit all budgets on your trip to Valparaiso:

Have you been to Valparaiso?
Are there any other things to do in Valparaiso that you’d recommend? 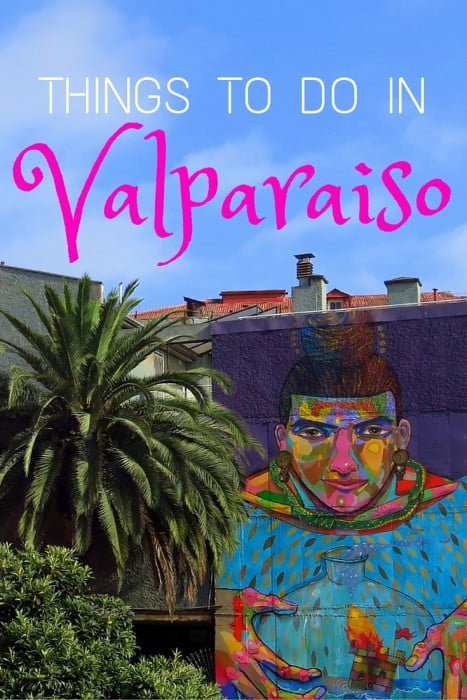