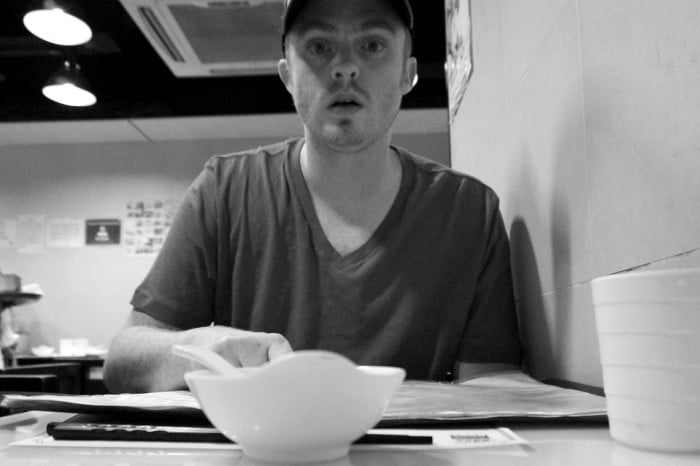 “Are you sure you don’t want me to pack your beige pants?”

The apartment in Chiang Mai was a mess in preparation for our upcoming trip to Hong Kong and I was yet again trying to convince Sam that it might just be a good idea to pack something aside from that neon green shirt from Melaka’s Orangutan House and a pair of shorts that belonged on the beaches of Phuket.

“When am I ever going to wear pants in Hong Kong?” he retorted.

“On plenty of occasions,” I thought in my head, “you needed them for that conference last month, and that time we went to the travel awards ceremony, and the time we checked in at that nice hotel in the city,” but there was simply no convincing him.

The pants got left behind.

Fast forward a few weeks later to our arrival in Hong Kong, and what do you know, we were invited out to lunch for a work related project. I clearly scanned the invitation too quickly because all I picked up was that we’d be having dim sum with a PR representative in Tsim Sha Tsui. I had been eating dim sum all week, so to me it sounded like a pretty casual affair. I pictured a small hole in the wall joint with steaming bamboo baskets and a steady stream of waiters rushing back and forth with sweat on their brows as they tried to feed the frenzy. Isn’t that what all dim sum restaurants are like?

What I failed to note was that this particular dim sum restaurant was located in the Ritz-Carlton Hotel; only one of the glitziest spots for the rich and famous. The hotel takes up floors 102-118 in the International Commerce Centre on the Kowloon Peninsula, making it the highest hotel in the world. If that doesn’t scream glamour, I don’t know what does! Of course, we didn’t know so at the time. Boy were we in for a surprise…

It wasn’t until we began walking towards the International Commerce Centre that we realized this was a more lavish affair than we had prepared for. Men in ties and business suits were shaking hands and closing deals while women looked ever so elegant in their monochrome dresses and sharp heels. We were not dressed for this.

As a girl, it’s a bit easier to go from casual to smart – put your hair down, adjust a scarf, throw on a little lipstick – but for a guy, there isn’t a whole lot you can work with. I was able to get by with the silk blouse, summer trousers, and leather sandals I was wearing, but Sam on the other hand, was sporting brown surf board shorts and a pair of yellow plastic sandals that would have been ideal for a day of caving in Laos.

HOLY CRAPIOLI! What were we going to do?!

Turning around and ditching the meal seemed like a pretty good option, but we couldn’t just not show. I could hardly contain my nervous laughter as we went up the escalator and then rode the elevator to the hotel’s entrance. We clearly looked out of place, but what can you do when you’ve come this far except work with what you’ve got? Right?!

We walked towards the restaurant where the Maître D’ looked us up an down thinking we were two lost puppies who had clearly wandered off in the wrong direction. After giving him our names – yes, to his dismay we were on the guest list! – he brought us around to the restaurant where I had to scoop up my jaw and mop the drool off the shimmering floors.

Floor to ceiling windows ran the length of the restaurant giving you those postcard-perfect views of Victoria Harbour speckled with junk boats and red sails. The furniture seemed to be upholstered in silk, and there were tiered chandeliers with tassels hanging from the ceiling. This was the epitome of elegance.

We were lead to a table to wait for our host and I started to feel a bit of relief. The sooner we sat down, the sooner everyone in the restaurant could forget about the fact that Sam was in surf shots and rubber sandals. Except no one forgot…especially not the Maître D’.

Just a few moments after we had settled into our chairs and attempted to hide our shame, the same man who took our names returned with a bag in hand. He whispered something into Sam’s ear and then escorted him to the bathrooms. You guessed it. He was politely asked to change into something a little more suitable for lunch at the Ritz-Carlton.

You’d think this would have solved our problems, but the fact is, it only made them worse. One of the nice things about travelling with Sam in Asia is that at 6’1 he’s a towering giant. If his red hair didn’t make it easy enough for me to spot him in the distance, the fact that his head bobs above the crowds sure does the trick. Now imagine dressing someone that size. You’re pretty much looking at an SNL comedy sketch.

When Sam returned from the bathroom my face turned beet red and I had to look away to try and contain the laughter. It was the worst fashion crime I have ever seen!

Here he was wearing black slacks that sat about 3 inches above his ankles, and since the pants wouldn’t close around his waist, he had a half-zipped crotch he was trying to hide with his polo shirt. To make matters worse, they had forced him to change out of his sandals, which meant he was sporting black leather shoes that were a couple of sizes too small, making his feet look like little boiled sausages about to burst.

I was holding back tears of laughter at this point! Oh, and did I mention the PR girl had already arrived. Yes, she was sitting to my left watching this whole scene unfold, and her first impression of Sam was that of a waddling penguin whose pants were just about ready to slide down. Not a good way to start.

The next hour was the biggest test in keeping a poker face. I tried to fill the table with pleasant chit-chat about trends in tourism and travel in Hong Kong, but every time I looked in Sam’s direction I could feel this howl of laughter rising up inside of me. I had to suppress a few snorts and turn them into coughs several times during the meal, which made it seem like I kept choking on dim sum, but in the end we survived lunch.

I’m telling you, the handshakes and goodbyes couldn’t come soon enough. We pretty much sprinted out of there as quickly as we could trying not to topple over with laughter, and then we lost ourselves in the crowds of Hong Kongers in the streets below.

Needless to say, I always read invitations a little more carefully now, and most importantly, Sam always travels with a pair of trousers stashed in his backpack wherever he goes. Wifey makes sure to sneak them in even if he insists they won’t be necessary!

A big thanks to my husband for being a good sport and letting me share this rather embarrassing story. 😉