I’ve spent many a night sleeping in airports, but the one that most stands out in my mind is the night that kicked off my backpacking trip across Southeast Asia.

Sam and I had just flown from Seoul to Kuala Lumpur and we arrived at the Low Cost Carrier Terminal (which was a zoo!) at around 10 p.m. Because it was so late in the day and the cross-country buses had already stopped running, we decided to spend the night at the airport and wait until 5 in the morning to catch a ride down to Malacca.

The question was: Where to sleep?

Countless travellers had already set up camp for the night and space was tight. There were people who had come prepared with thin foam mattresses while others were sprawled out on blankets, some were resting their heads on a friend’s shoulder while others were using their bulky carry-ons as pillows. I ogled at those experienced backpackers who looked so comfy with their yoga mats and neck pillows, and wished I’d also come more prepared…

We eventually found a quiet spot next to some other travellers in a corner of the terminal, and I curled up on the cold ceramic floor for the night. It was one of those sleeps where I kept waking up every 20 minutes because my hip and shoulder bones were digging into the ground, so I would have to roll over to the other side every few minutes while the fluorescent overhead lights blinded me.

I can’t say it was the best night’s sleep, but that was just one of the many nights sleeping in airports that taught me how to prepare for a good night’s rest.

Tips for sleeping in airports: 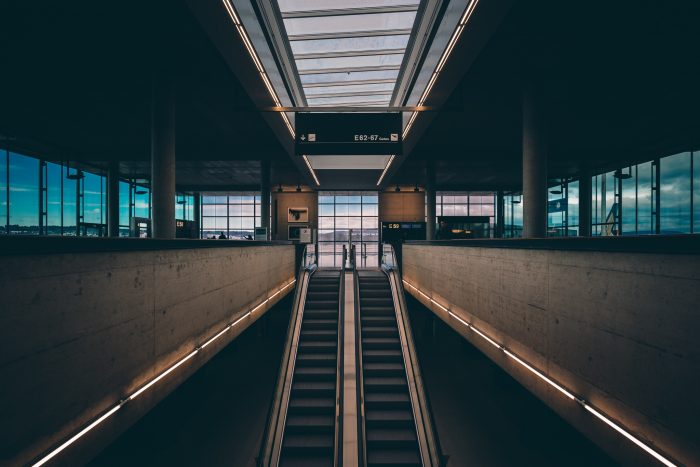 First things first, you need to set your alarm. My internal body clock gets confused when I hop time zones so I can never trust myself to wake up in time to catch a flight.

I once lay down at the airport in Abu Dhabi while I waited for my flight to Brisbane to board, and well, I nearly didn’t make it!

Thankfully I was woken up by a woman who was getting on a flight departing for Nigeria, and that’s when I realized that not only had I completely zonked out for several hours, but my departure gate had also changed. A sprinting race ensued and I managed to make it to my gate just a few minutes before they started boarding. Whewww!

Lesson learned: Set an alarm because you can’t always trust yourself or your travel buddy to wake up in time.

Scope out the area

A really cool website to check out is SleepingInAirports.net; like the name suggests, this website is all about finding the best spots to catch some zzz’s in airports around the world.

If you can’t go through to the gates because your flight doesn’t leave for several hours (and that’s quite likely if you’re spending the night at the airport!), another idea is to look for a spot in the arrivals area. The departures area tends to be a bit more meagre in terms of sleeping options since it’s often quite crowded, but most people in arrivals are there to meet family or grab a taxi and continue onwards to their final destination, so that usually means plenty of seating and potential nap areas.

Lesson learned: If you can’t find empty seats in the departures area, scope the arrivals section instead.

Some might think this is overkill, but while I was backpacking in Southeast Asia I travelled with both a metal safety mesh for my backpack and a travel lock. The main reason for this is that I was travelling on a budget and I wanted to be able to pack my valuables while I was out of the guesthouse for the day, but in the end it also came quite handy in airports.

Whenever I had a long layover and I wanted to catch a bit of sleep, I would put the mesh cover over my backpack and lock it somewhere safe right next to me, and then I would use the padlock to secure any other smaller bags I happened to be carrying.

I got a lot of use out of these two items, so I think they make good gifts for travellers who are setting off on a backpacking trip.

Lesson learned: Secure your belongings so you can sleep with peace of mind.

I’m all about comfort when I travel and that’s why you’ll usually catch me flying in leggings or slouchy pants, a t-shirt, a hoodie, and running shoes.

This right here is my go-to travel outfit; I can stretch, cross my knees, and feel flexible in it, which means it’s almost as good as wearing pyjamas, minus the disapproving glares.

I also purposely wear layers in case it’s too cold inside the airport.

Lesson learned: Wear something you’ll feel comfortable in, and dress in layers in case it gets warm or cold.

Get cozy for the night

If you want to get a good night’s sleep (and be comfortable in flight!), I would suggest travelling with a few token items.

First up, a neck pillow so you don’t wake up with a kink in your neck.

Next, a scarf or pashmina that can easily double up as a blanket.

And if you’re going ultra-budget on your trip and you know you’ll be spending many a night sleeping in airports, then you might even want to think about a light yoga mat. I’ve personally never travelled with one myself, but I’ve encountered many travellers who swear by them, so it’s something to consider.

If you’re a light sleeper, you may also want to add an eye mask to your list.

Lesson learned: Carry a few essentials like a neck pillow, scarf, and eye mask for a more comfortable sleeping experience.

Know when to splurge

Lastly, know when it’s best to just pay for a bed!

For example, when I flew from Toronto to Johannesburg last year, I knew I would be catching 3 back to back flights, which included one airport change in New York City during rush hour, followed by a really long layover in Abu Dhabi.

While sleeping in airports along the way was an option, I knew I would a very grumpy traveller if I didn’t get some proper rest, so I bit the bullet and paid for a hotel. I ended up finding a cheap hotel inside the airport (score!) while browsing on Booking.com and it was worth every penny.

In some airports sleeping pods are another great option to consider. These are ideal for travellers who want to catch some shut eye on a layover that isn’t quite long enough to warrant paying for a hotel room.

Pods can generally be rented by the hour, plus let’s face, it’ll make you feel like you’re in a Sci-Fi film.

Lesson learned: Airport hotels and sleeping pods are worth it if you want to arrive well rested.

What’s the best / worst airport you’ve ever spent the night in?
Do you have any other tips for sleeping in airports? 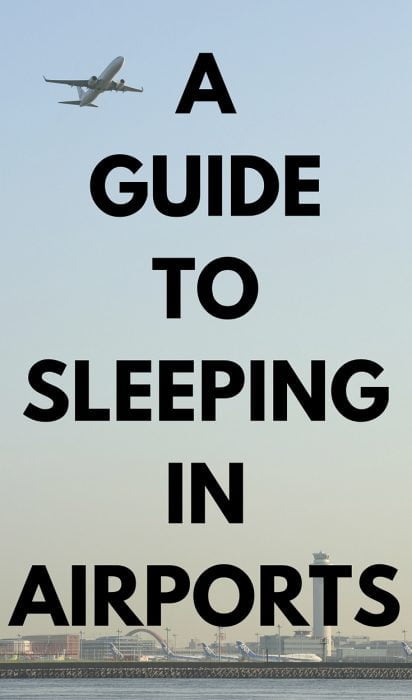