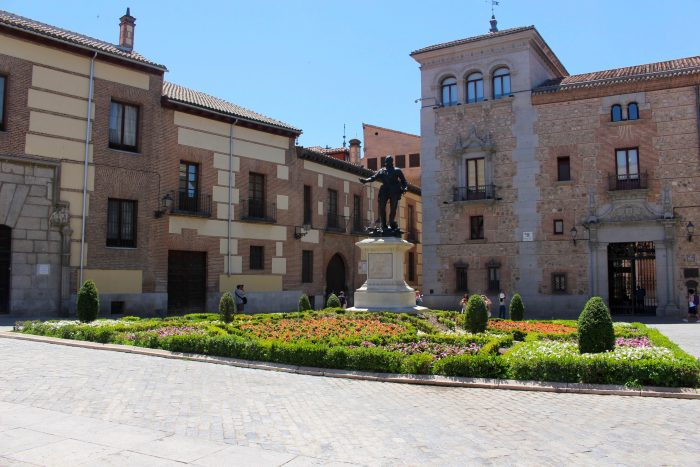 Despite being the third largest city in the EU and the capital of Spain, Madrid often gets overshadowed by other Spanish cities like Barcelona and Seville. While it might not possess Guadí masterpieces, the energy of this colorful capital city is absolutely magical. You’ll find an endless amount of traditional, Spanish restaurants and a great mix of international cuisines as well. There’s also no shortage of historic buildings and museums for those art lovers and history buffs.

Madrid is an extremely walkable city and you’ll quickly find that most of the tourist attractions in the historic center are just a few minutes from each other. But if the weather isn’t behaving, their metro is an extremely efficient and convenient option. If you can’t tell already, I have nothing but positive things to say about Madrid! The locals are friendly and welcoming, and there’s a vibrant energy throughout the city that’s contagious.

I’ve spent quite a bit of time in Madrid and have created a great list of attractions that are worth your time and money! 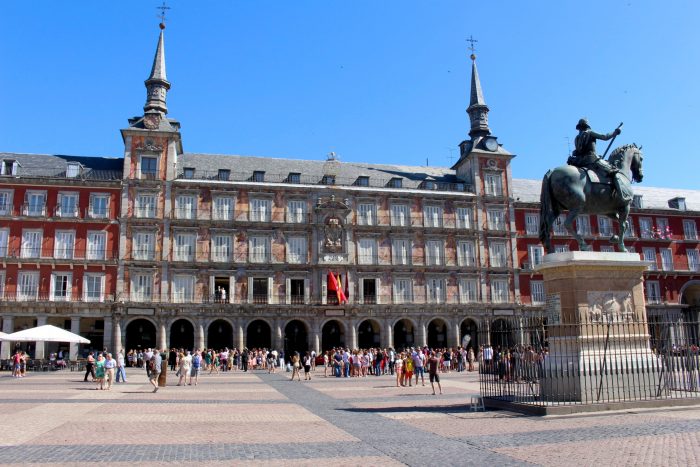 The colorful, main square of Madrid attracts thousands of tourists and locals every day. Dating back to the 17th century, Plaza Mayor has been used for public executions, bullfights, daily markets, and so much more. Nowadays, it’s the perfect spot for people watching, even if their restaurants are a bit overpriced. If you’re interested in taking a free Sandemans walking tour of the city, groups meet in the center (next to King Philip III’s statue) every morning! 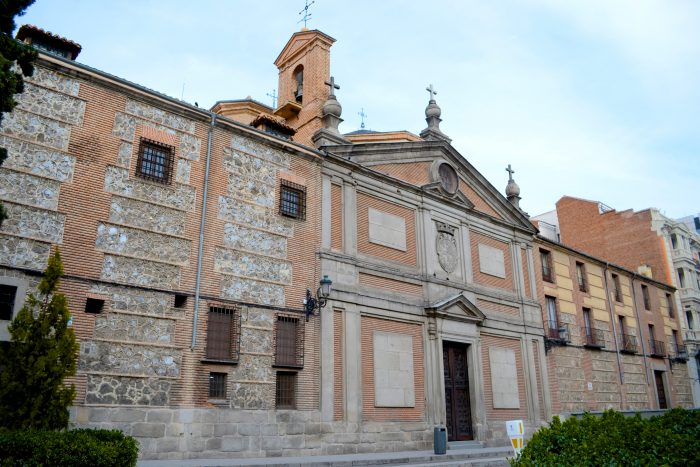 This royal monastery was founded by Joanna of Austria, Princess of Portugal, in 1559 and is a hidden gem in Madrid’s city center. Guided tours are given only a few times a day and cost 6 euros. This is still a working monastery which currently houses around 30 nuns. Pictures aren’t allowed inside but, trust me, the beauty and history of this place will blow you away. 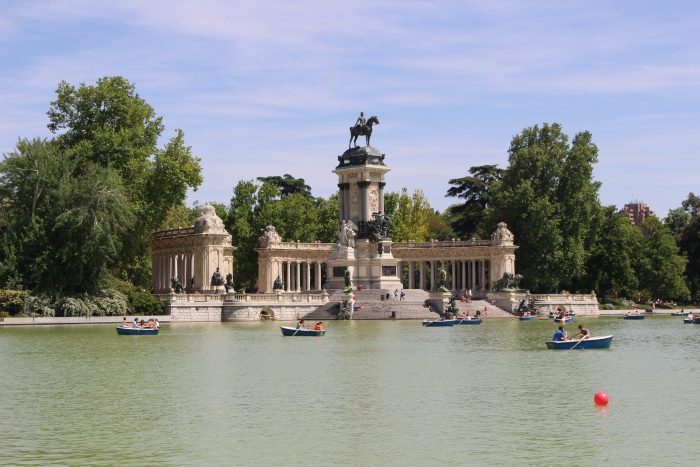 Beginning in the 16th century, Buen Retiro Park belonged to the Spanish Monarchy. Lucky for us, it’s now a public park for people to enjoy and escape the bustling city, without actually leaving it! There is so much to see and do in this park, and one of my favorite spots is the Crystal Palace. This beautiful cast-iron and glass structure was built in 1887 to originally display plants and wildlife from the Philippines. Nowadays, it houses temporary exhibitions of contemporary art and is free to enter! 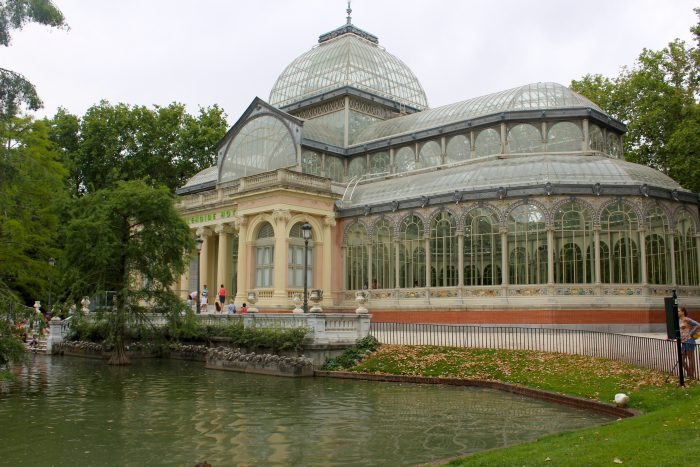 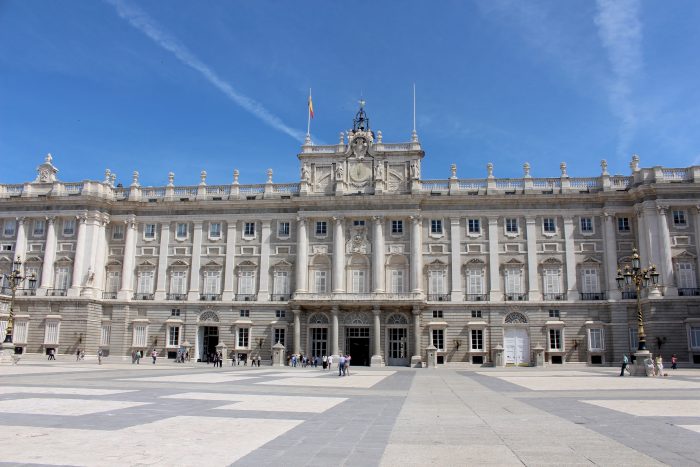 With more rooms than Versailles (3,418 to be precise), Madrid’s Royal Palace is one of the largest in Europe! While this is the official royal residence, the royal family doesn’t actually live here anymore. It’s mainly used for formal occasions in one of its incredibly lavish rooms. You can pay 10 euros to take a self-guided tour and it’s worth every cent. I’d recommend booking ahead online to avoid the long lines. 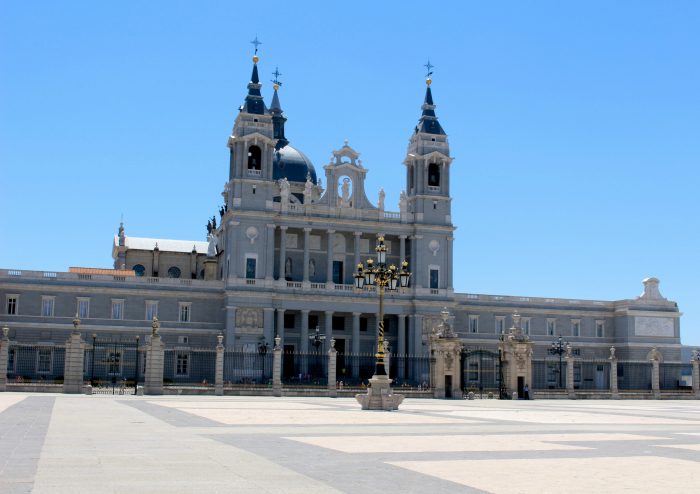 Located just a stone’s throw from the Royal Palace is Almudena Cathedral. It was constructed in the late 1800’s which means it’s not as ancient as other European cathedrals, but it is rather unique inside. You’ll find Neo-Gothic architecture mixed with contemporary stain glass and even some “pop-art” decor. It’s free to enter and will only take you about an hour to thoroughly explore! 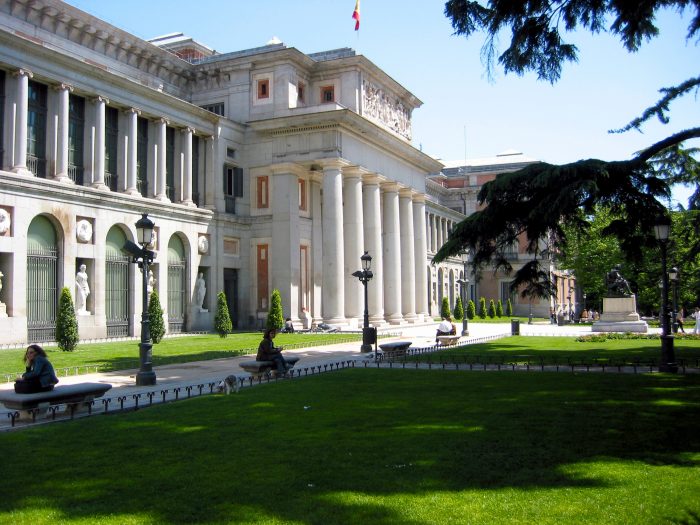 If you only have time to visit one museum in Madrid, it should be the Prado. Like most giant museums, I’d recommend grabbing a map upon entering, sitting down, and forming a game plan! Don’t even try to see it all in one day because not only is it impossible, but you will not appreciate it. The Prado houses famous paintings by Velazquez, Goya, Rubens, amongst many others. The entrance fee is 16 euros and I’d absolutely recommend booking ahead online to avoid the long lines. If you visit during the last two hours of the day, it is free to enter! 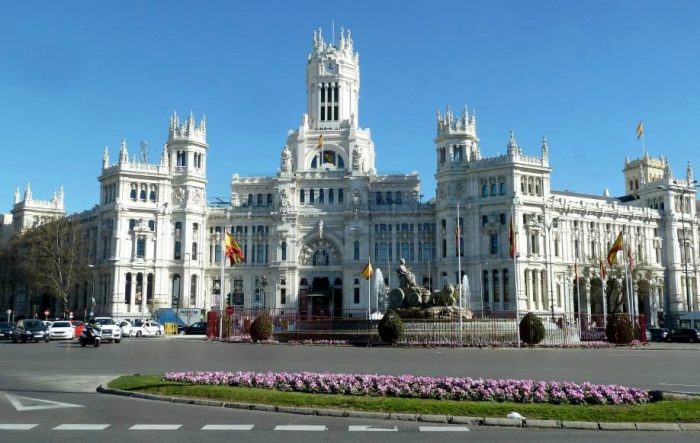 Don’t be fooled by the name, this is actually Madrid’s City Hall! It was founded in 1867 during the reign of Queen Isabel II and inaugurated as a post office in 1909. Nowadays, you’ll find offices, exhibitions, classrooms, and great public spaces for people to sit down and take a break. While it’s free to enter, I’d recommend paying 2 euros to go up to the rooftop and take in the gorgeous panoramic views of the city. 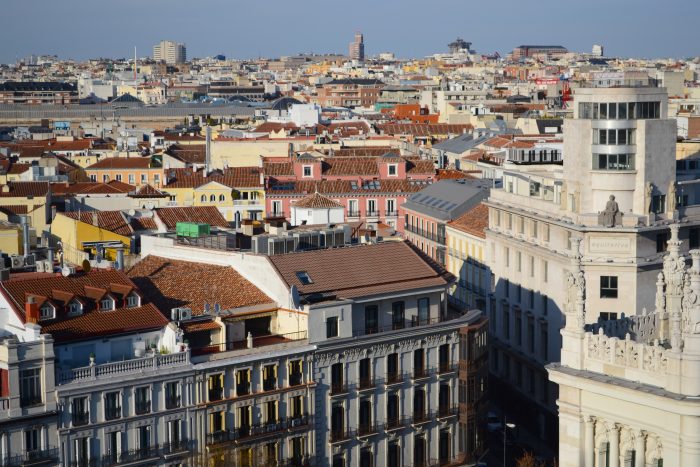 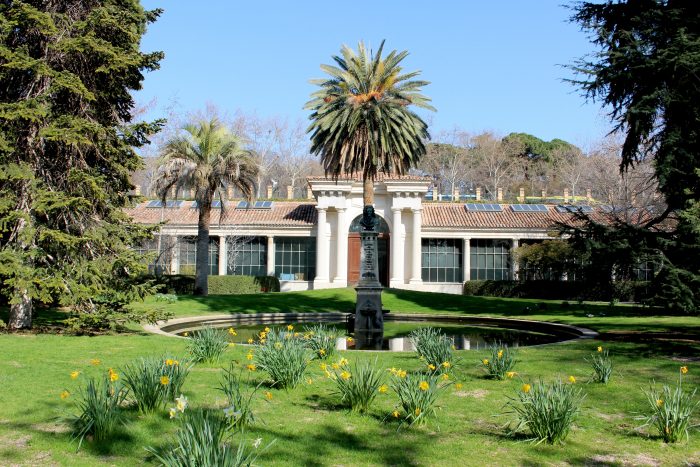 King Carlos III opened the Royal Botanical Gardens himself in 1781. They were designed by Juan de Villanueva, the same man who designed the Prado Museum which is right next door. For only 4 euros, visitors can enjoy a wide variety of flowers, trees, and exotic plants from around the world. I’d recommend bringing a picnic and enjoying the beautiful surroundings of this peaceful oasis in the city center. 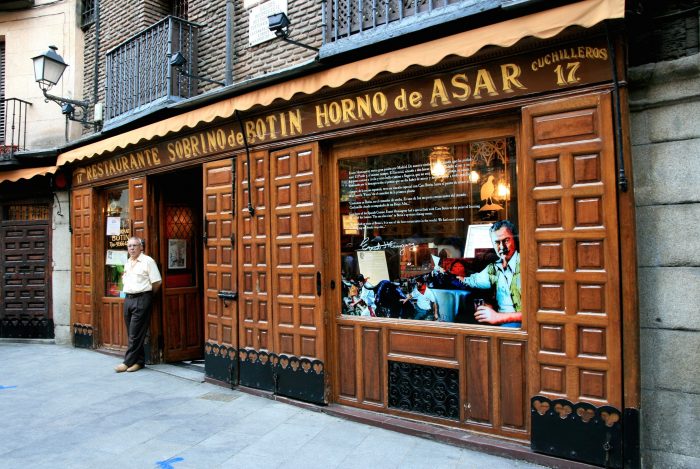 Ernest Hemingway, Hollywood celebrities, and Spanish royalty are just a few of Botín’s famous diners. The food is as delicious as it is pricey but it made this list for a more important reason. Botín is the oldest restaurant in the world! While it dates back to 1590 as a bodega, Frenchman Jean Botín opened as a restaurant in 1725, and its doors have been opened ever since. Reservatfions are a must and companies like Insider’s Madrid give tours of the historic restaurant before it opens to the public. 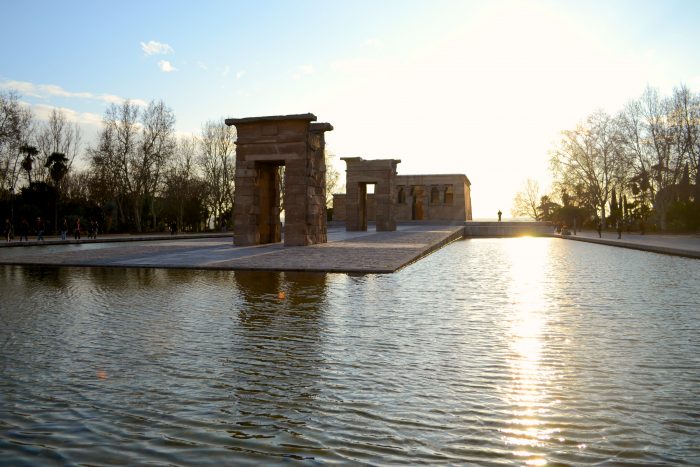 This ancient Egyptian temple dates back to 200 B.C. and is located in Madrid’s Oeste Park. Yes, you read that correctly! In 1960, Spain provided aid to UNESCO who helped save many valuable monuments and archeological sights in Egypt. As thanks, Egypt gave the temple to Madrid! With beautiful views of the city and surrounding Guadarrama mountains, this is a popular sunset spot for visitors to enjoy and unwind after a busy day. 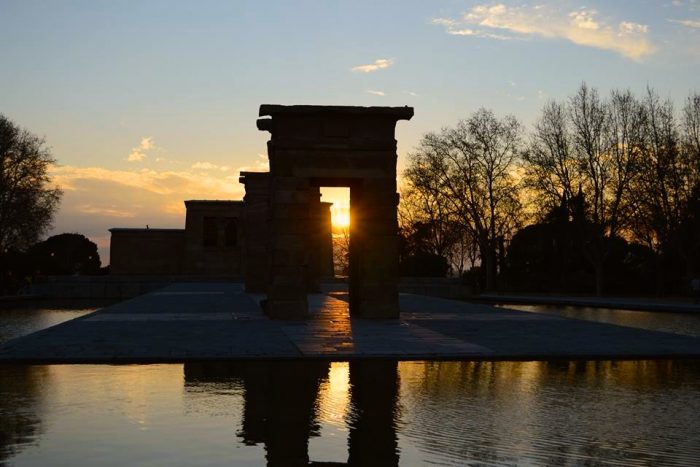 Are you interested in visiting Madrid?
Which sight would you visit first? 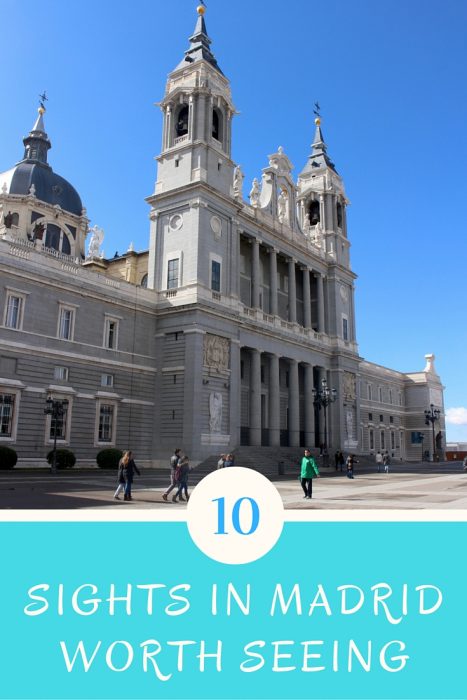