What do an African safari and an Amazon Cruise have in common? Well, aside from being two big bucket-list trips, the focus of both is to spot wildlife and be close to nature.

While we were travelling in Peru, Sam and I ended up talking to a couple, who like ourselves, had done an African safari and an Amazon cruise. We both had memorable animal encounters to share, however, it was also interesting to chat about the contrast between these two trips, especially in terms of how you get to experience wildlife.

For today’s post I thought it would be interesting to do a compare and contrast article that juxtaposes these two trip. I’ll be writing based on my experiences doing a safari in South Africa’s Kruger National Park and an Amazon river cruise in Peru. If any of you are debating between an African safari or Amazon cruise, I hope this post will give you a better look at what to expect from each.

When it comes to safaris, South Africa has no shortage of options. The best known park of all is Kruger National Park, which is one of the largest game reserves in all of Africa. If your travels are starting out in Johannesburg, then Kruger is a good place to go. However, if your travels are going to be concentrated closer to Cape Town, you’re better off searching for safaris along the Garden Route. This Travel + Leisure article offers some safari options near Cape Town.

Of course, you can also do safaris outside of South Africa. If you’re looking for some ideas, CNN Travel compiled this list of the best 10 safaris across Africa and it covers parks in Kenya, Botswana, Uganda, Tanzania, Namibia, the Gambia, Algeria, and Madagascar, as well as South Africa. You have plenty to choose from. 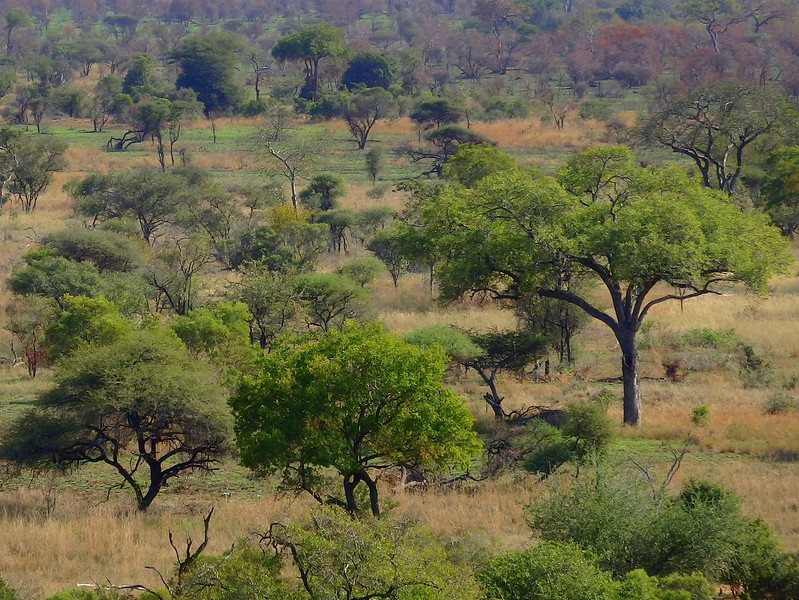 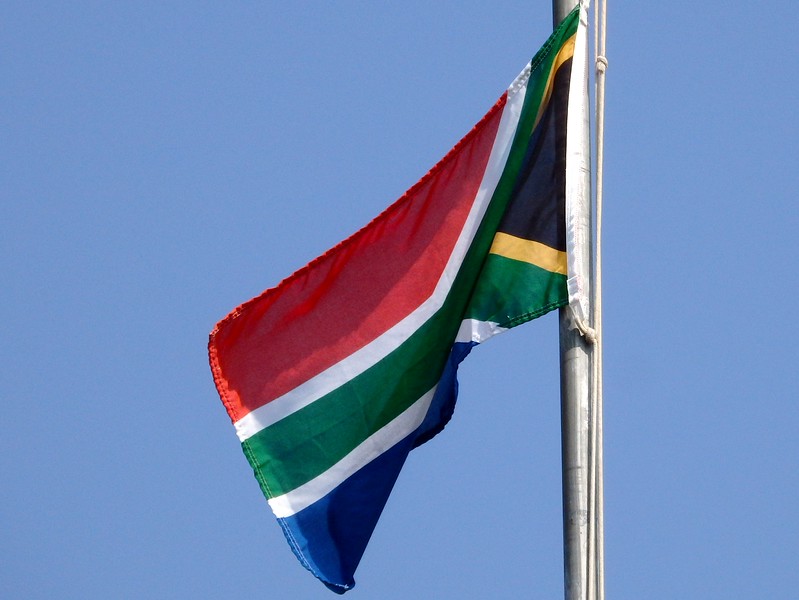 When it comes to cruising the Amazon, you can do so on the Peruvian side or the Brazilian side. Most Amazon river cruises in Peru depart from the port town of Nauta. If you go this route, you’ll likely fly into Iquitos from Lima, and then from there it’s a 2 hour drive to Nauta (transportation is generally arranged by your tour provider). Iquitos is the largest city in the world that can only be reached by boat or plane – no roads leading in! – and it also has an interesting colonial history, so I would recommend spending a couple of days here before the start of your cruise.

If you’re looking at Amazon cruises in Brazil, you’ll find that the majority depart from Manaus. This is the most populous city in the Amazon rainforest, so again, you may want to tack on a couple of days to do some sightseeing before or after your cruise.

In South Africa, we were looking for the Big Five: the lion, the elephant, the buffalo, the leopard, and the rhino. These animals are all quite large, so while some may be a bit elusive (I’m looking at you, leopard!), once you find one it’s hard to miss.

Aside from spotting the Big Five, we also saw a whole lot of equally fascinating animals along the way, including giraffes, zebras, antelope, wart hogs, crocodiles, and more.

Again, when you’re looking for these animals in the bushveld (grassy plains with some dense clusters of trees and tall shrubs), they are not that difficult to find. From the second we entered the park, there was always something to catch our attention. 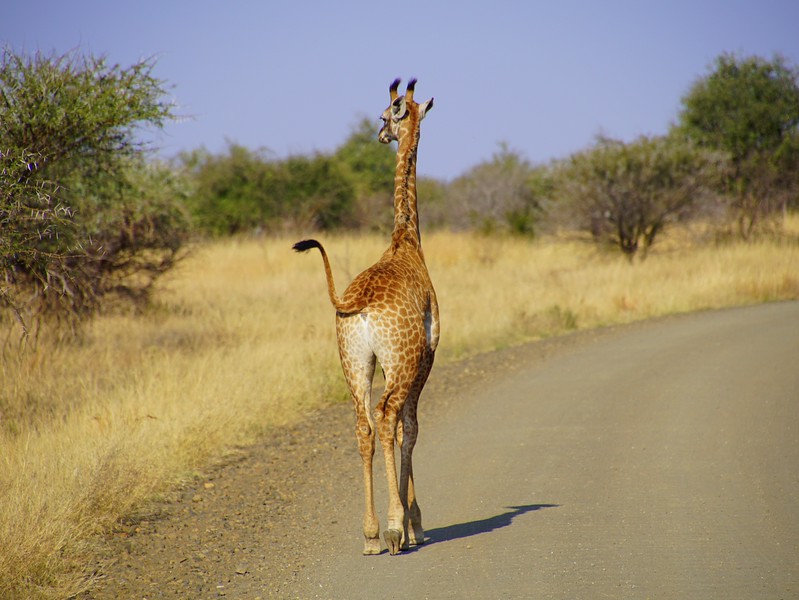 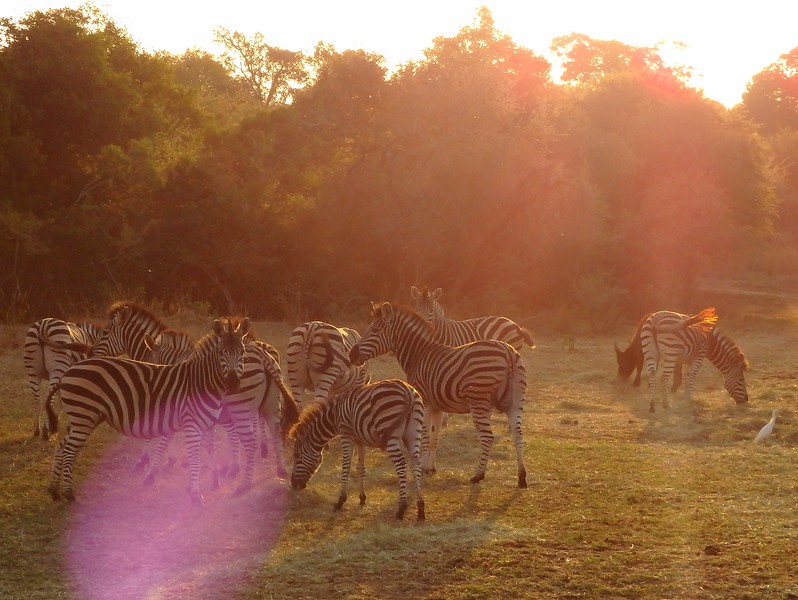 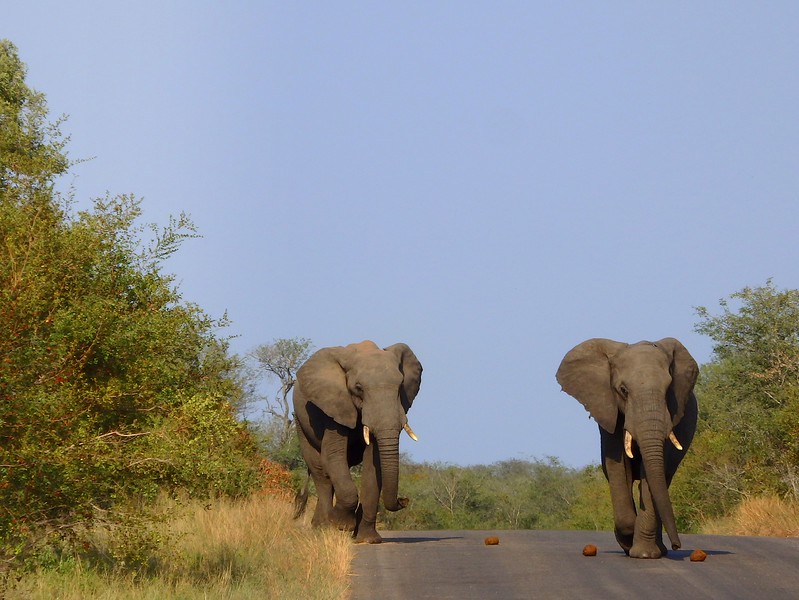 To contrast, spotting wildlife in the Amazon was a bit more difficult.

In the Amazon you’re dealing with tropical rainforests, which are thick and lush, and basically the perfect hiding spot for wildlife. We saw monkeys, sloths, macaws, lizards, and toucans, but because these are relatively small creatures and they are high up on the trees, sometimes they were difficult to see.

We also got to fish piranhas and see pink dolphins.  Aside from that, you may get lucky and spot a capybara, an anteater, or even an anaconda, but those are hard to come by. Our guide told us he had only seen an anaconda twice in 15+ years of guiding! 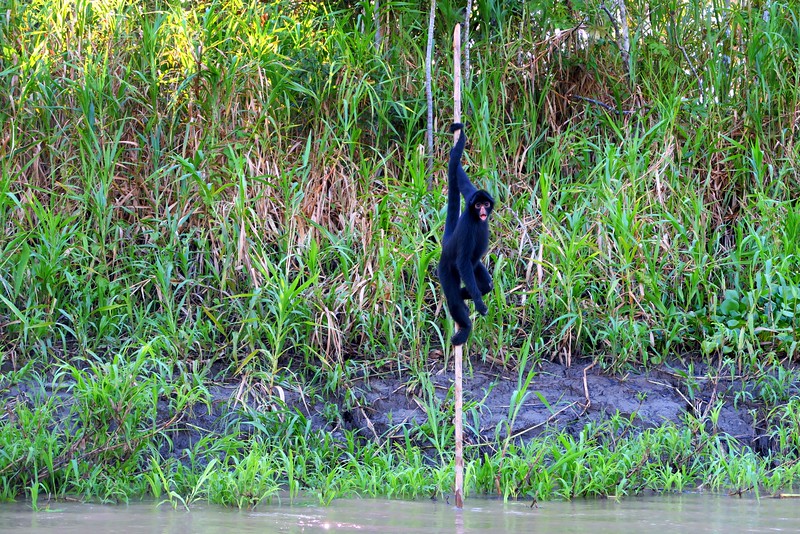 You’ll encounter different types of transportation on safari. For the most part, in Kruger National Park we saw people in private cars or open game viewing vehicles. The game viewing vehicles (pictured below) are often adapted land cruisers with tiered seating so that no one is blocking the view. These vehicles give you additional height, which is great for viewing but also provides a barrier between you and the wildlife. 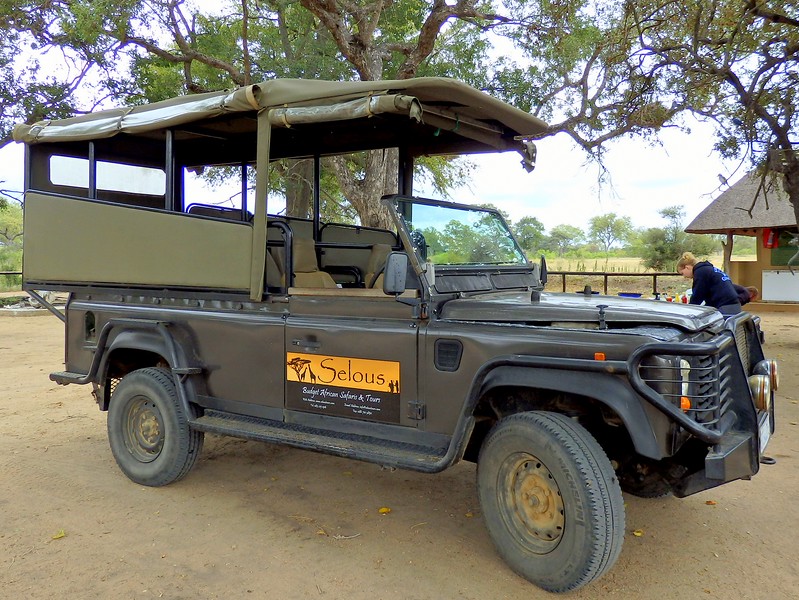 Most of the wildlife spotting in the Amazon will take place on the water. When we weren’t covering long distances on the cruise, we were out exploring the smaller tributaries on skiffs (these are smaller, flat-bottomed boats with an engine).

Aside from that, you should also expect to do a bit of walking to see some of the smaller wildlife like reptiles and insects. 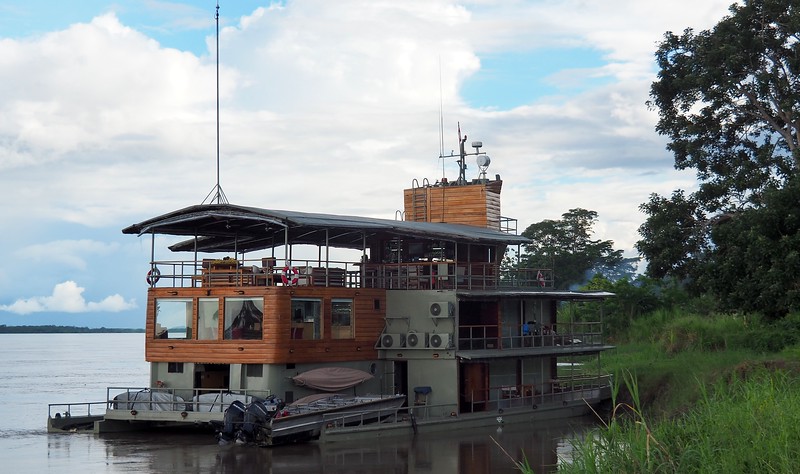 When it comes to game viewing, the dry winter months between May to October are best. During the dry season, the water levels are lower, and this means that animals tend to congregate around watering holes. Winter season also means less foliage, which makes it easier to spot wildlife.

If you want to see newborn animals, then September and October (spring in the Southern Hemisphere) are prime time for that.

During the summer months you have the heat to contend with and it can be busy during the school holidays, but it is still possible to go on safari. 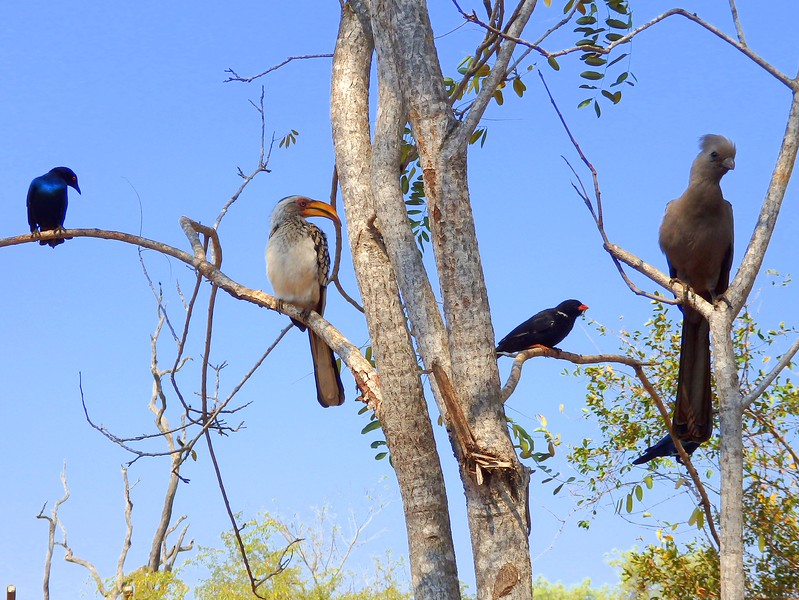 You have two seasons in the Amazon: dry season and wet season.

The dry season runs from June to November and during this period the water levels are lower. The dry season is known for its intense heat and humidity, but relatively low levels of precipitation.

The wet season runs from December to May and the heavy rains mean the water levels of the Amazon are a lot higher. This season offers slightly cooler temperatures, but let’s face it, the humidity never really subsides. One nice thing about visiting during the wet season is that boats are able to access flooded areas that would normally be inaccessible, so you get to explore a bit deeper.

That being said, it is possible to cruise the Amazon year round.

One of our most memorable meals on safari was braai, which is a South African barbecue featuring different types of meat like boerewors (farmer sausage), sosaties (lamb skewers), steaks, chicken, and pork.

Aside from that, we also got to try bunny chow, which is a dish that originated in Durban. This city has the largest Indian population outside of India, and it that has influenced the cuisine. Unlike the name suggest, bunny chow has no rabbit meat, rather, it is made by hollowing out a loaf of bread and filling it up with curry.

Lastly, if you want to try a popular South African snack, then load up on biltong, a cured meat that can be made from beef or game meats.

Our meals on the Amazon Cruise used local ingredients and featured some popular Peruvian dishes. The most exciting dish we tried was grilled piranha, which we fished ourselves. These were more of an appetizer since piranhas have surprisingly little meat.

Aside from that we also tried ceviche, dish made with raw fish cured in citrus juice; paiche, a freshwater fish that can be prepared grilled or steamed; and juane, a steamed rice and chicken dish cooked in a leaf.

You can also expect lots of fresh fruits for breakfast.

You’ve probably noticed that everyone on safari tends to wear beige and neutral colours; this is because bright colours can scare off animals and they can also be quite distracting for others trying to spot wildlife.

Pants and long sleeves will help minimize bug bites and sun burns, plus they’ll save you the body scrapes if you go on a bush walk. It’s also important to pack a fleece since temperatures drop overnight, even during the summer months. You can have a look at what to wear on safari here. 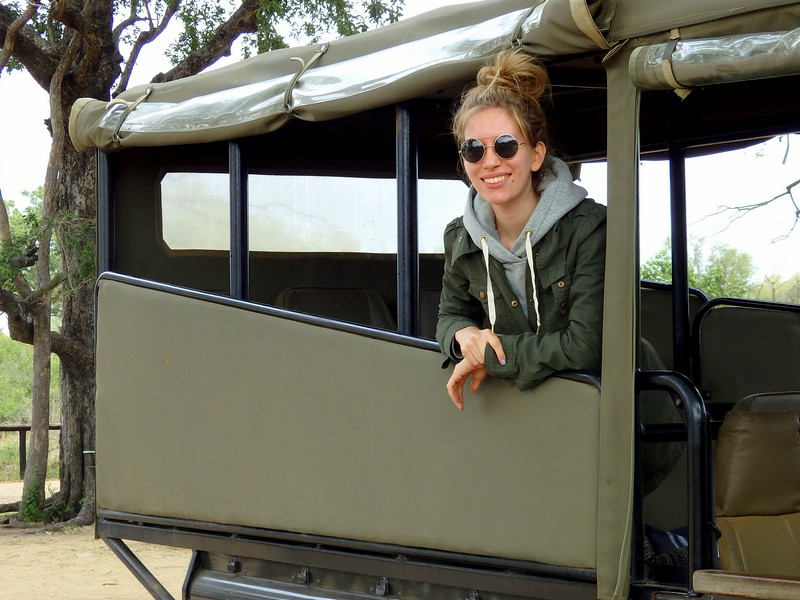 When packing for the Amazon you want to focus on breathable layers that are quick to dry (not cotton!) and pieces that will protect you from the sun and all the critters (long pants are a must).

You’ll also want comfortable hiking shoes that can handle muddy ground, and a rain jacket in case you get caught in a downpour. Here’s a full Amazon packing list which I compiled after packing wrong for my own trip.

And that’s a quick look at some of the differences between an African safari and an Amazon cruise. If you’ve done either or both of these trips, I’d love to hear about some of the similarities or differences you encountered.

African safari or Amazon cruise?
Which would you choose?