What do you think of when you think of Paris? Because I’m guessing that it’s probably the Eiffel Tower, the Arc de Triomphe and the Champs Élysées. And don’t get me wrong, these are all great places to visit and every first visitor to Paris should definitely climb the Eiffel Tower at least once…

But what about when you’ve seen these locations? What then? Although they are all very beautiful places to see and visit, despite what many guidebooks may lead you to believe, there’s a lot more to Paris than just the Iron Lady and the Louvre! Here’s your complete guide to 10 unusual things to do in Paris that don’t involve the Eiffel Tower: 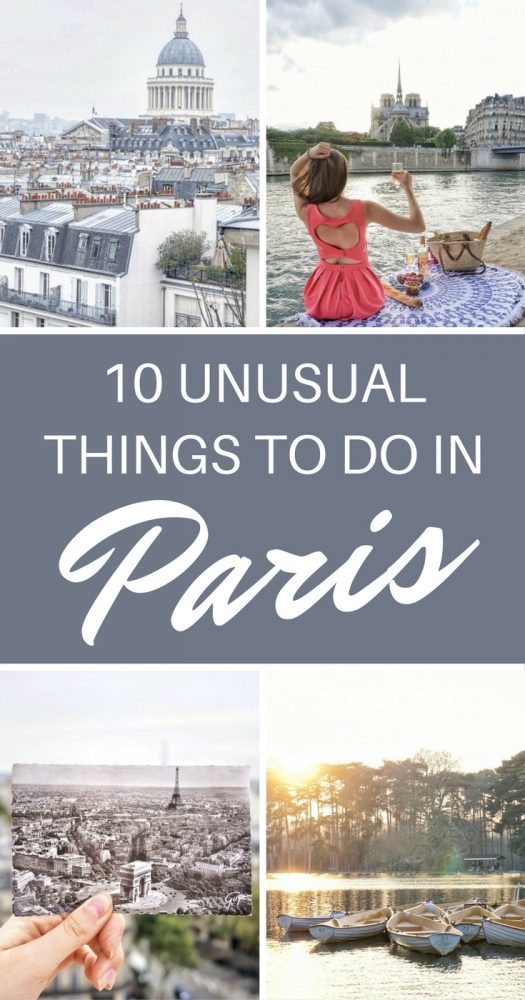 1. Visit one of the offbeat and quirkier museums in Paris.

Sure, the Louvre and Musée d’Orsay are beautiful museums, but they’re also where everyone goes come tourist season! Picture long queues and so many people that it’s hard to spot the Mona Lisa amongst the crowds! More unusual museums in the City of Love include the Paris Sewer Museum, the Museum of Romantics, the Fairground Museum and the Counterfeit Museum.

The quirkier museums are almost all under 10 euro to visit, with many being less than 5 euro or completely free. The majority of museums around the city are also free to European citizens under the age of 26 and everyone under the age of 18.

Take your pick; there’s something for everyone! 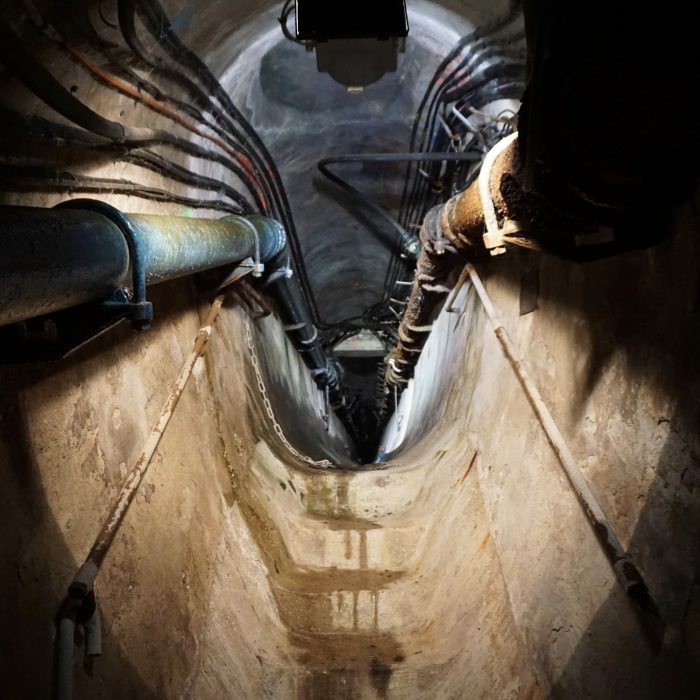 2. Go for a balloon ride in Parc André-Citroen.

You’d do well to find something more unusual in Paris than going up into the skies for a hot air balloon ride. Situated in the André-Citroën Park, the hot air balloon is officially the biggest in the world! What better way to get a feel for the city than seeing it from above? 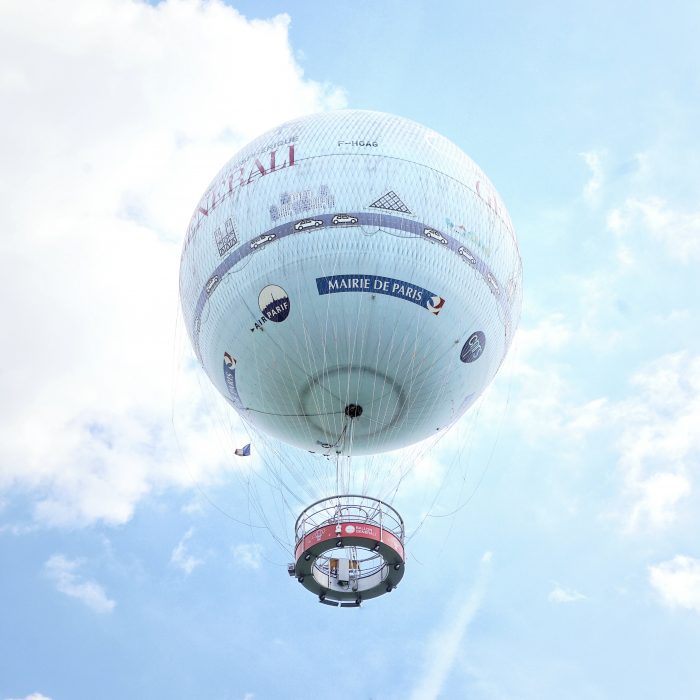 3. Pick up an ice cream at Berthillon and wander around the Île de la Cité.

Ah, Île de la Cité; home to Notre Dame and a whole host of other historical sites (including a courtyard paved with old gravestones).

While Italy may have gelato as its claim to fame, Paris is home to Berthillon ice-cream; some of the world’s best ice cream! With dozens of flavours from strawberry (this literally tastes like eating real strawberries) to salted caramel to plain old chocolate, you’re sure to find a flavour you fancy. 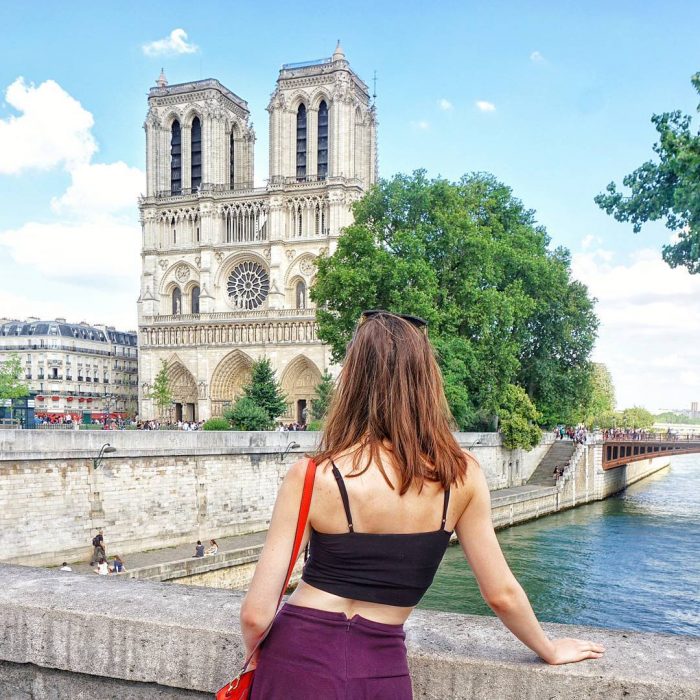 4. Have your very own Parisian picnic!

If you’re looking for the authentic ‘French’ experience during your Parisian adventure, then there’s nothing more French than picking up a baguette, fresh fruit, a bottle of wine, grabbing a few friends and heading down to the Seine for sunset.

Just make sure that you arrive early enough in order to secure the perfect sunset watching spot! 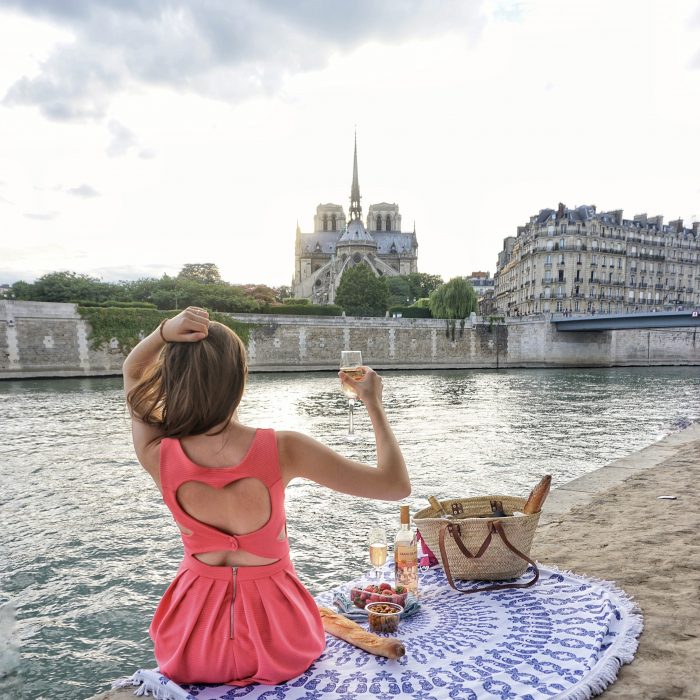 5. Wander around one of Paris’ more unusual districts.

Not only is Montmartre one of the best places to head to for eating out or spotting local artists painting street scenes, it also happens to be one of the best places in Paris for snapping photos. Go for sunrise, before all the tourists arrive for the day, and you’ll have the place to yourself! With the sinking house of Montmartre, La Maison Rose and the Sacré-Coeur all within a stone’s throw of each other, you’ll find yourself wishing you could stay longer in this quaint neighbourhood. 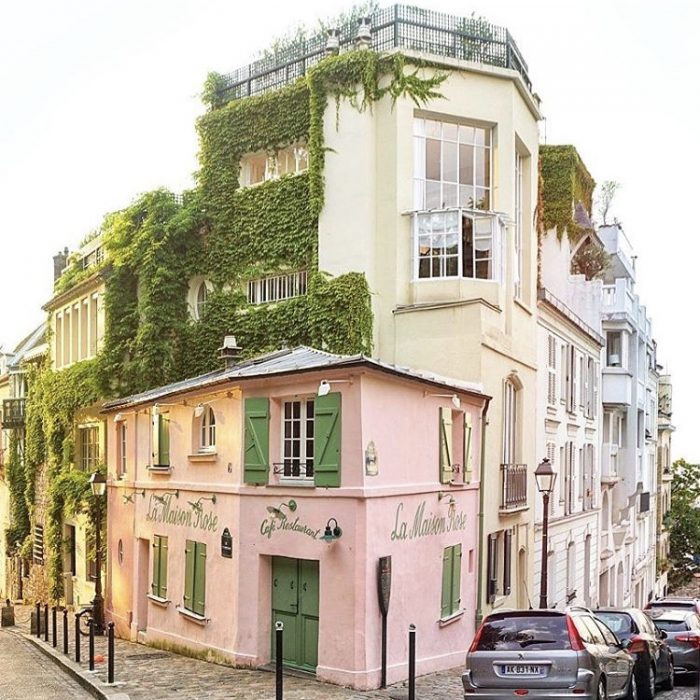 6. Head just out of the city and explore Bois de Boulogne.

There are often serious discussions about the lack of green spaces in Paris proper. Unlike London or New York, there are no vast green spaces in the city centre. Instead, Paris is surrounded on both sides by the dense woodlands of Bois de Vincennes to the East of the city and Bois de Boulogne to the West.

Bois de Boulogne is situated near the end of Metro Line 1. The former royal hunting ground is now home to he Louis Vuitton Art Foundation and the Jardin d’Acclimation – a series of landscaped gardens, a mini golf course and several eateries. There’s even a château that can be visited! 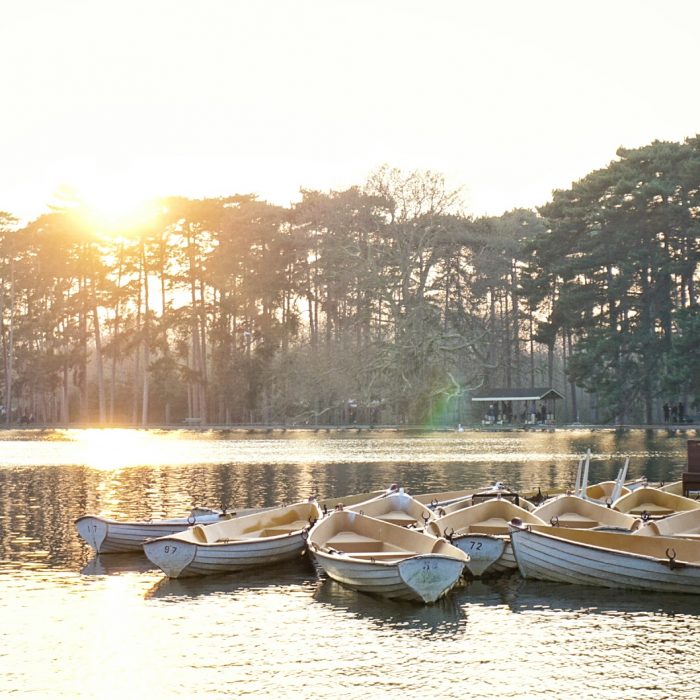 7. Pick up a souvenir or two at the Port St Ouen flea market.

The largest flea market in the World is held each and every weekend on the outskirts of Paris at Port St Ouen. Peruse the varied wares and antiques, marvel at some of the more eccentric vintage clothing pieces and pick up a souvenir postcard for as little as 1 euro. 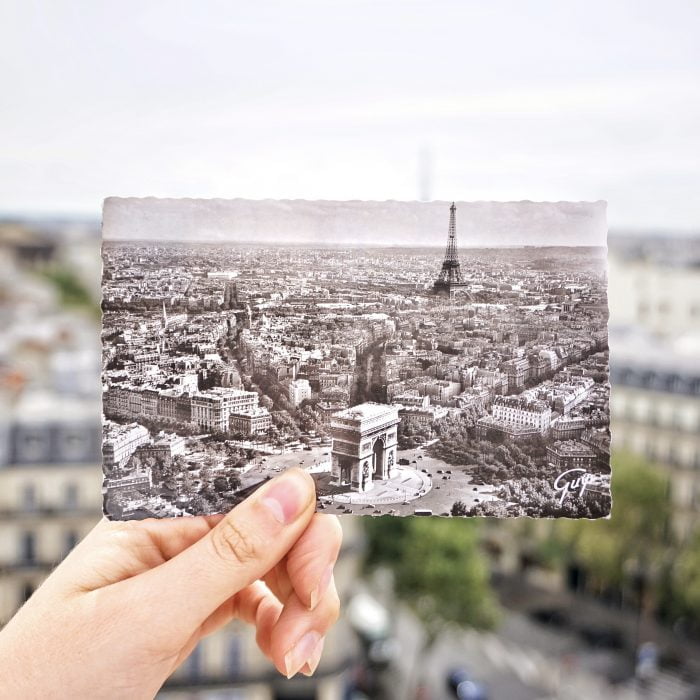 8. Grab your camera and climb up the Panthéon.

Instead of heading up the Eiffel Tower (the queues are hours long, anyway), why not head up to the Panthéon and view Paris from above? Unparalleled views from the top leave you speechless; Notre Dame, the Eiffel Tower and plenty of other iconic landmarks are all visible from the top of this monument in the 5e arrondissement. 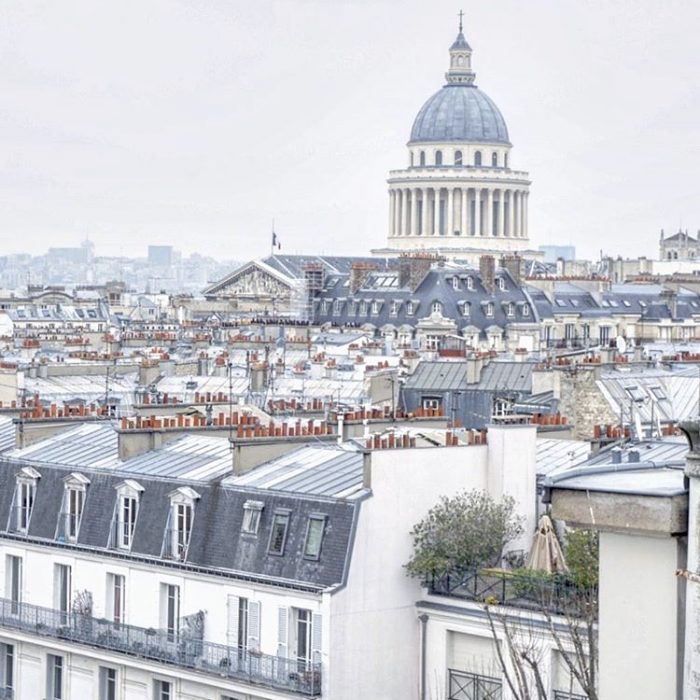 9. In the summer, head to Paris Plages or the Jardin des Tuileries Funfairs.

When it comes to summertime, your best bet is to head where the locals do. Although it’s widely thought that there’s a mass exodus from Paris in August, many locals inevitably stay in the city.

Summer activities are regularly organised by the mayor and city of Paris; these include a fairground in the very centre of the Jardin des Tuileries and a beach very close to Notre Dame. There are also plenty of free music festivals and a whole host of other things to see and do in Paris. 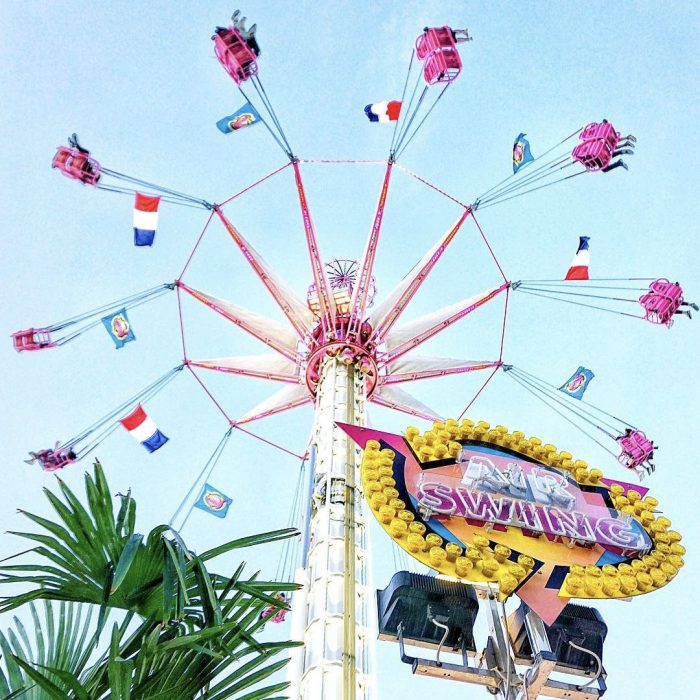 10. Wander among the Paris bouquinistes.

So iconic are the Paris bouquinistes, that in 1991, they were deemed a UNESCO World Heritage Site. Often referred to as ‘the river that runs between two bookshelves’, no trip to the city of lights would be complete without a quick glance at the vintage books, cards and posters that are sold in these iconic green boxes. 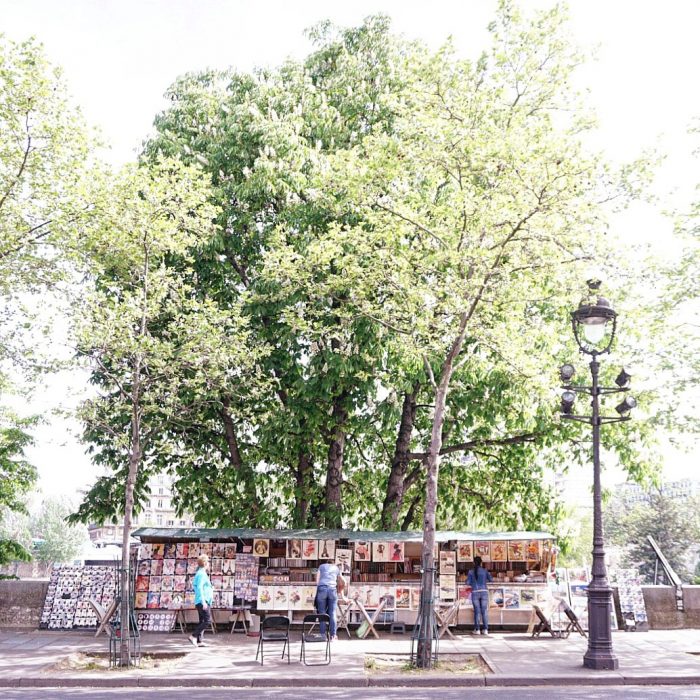 Have you been to Paris?
Are there any other unusual things to do in Paris you’d add to the list?
Let us know in the comments!