Water bluer than the sky. Ripples in the waves reflect the warm light of the sun. Cliffs crash into the sea and hills roll into the horizon. Winding stone streets are outlined with white-washed paint. Cascading down the cliffs, blocks of white and blue homes tower on top of each other. Colors are pulled from the environment that surrounds you leaving only a masterpiece of architecture and nature. Every corner reveals another photo begging to be taken and every alley leads you to the next great adventure.

Greece is its name and it has no doubt topped everyone’s dream travel list at some point in their life, and rightfully so. But with over 150 inhabited islands to choose from, how do you know where to take your dream Greek Island holiday?

Every island has it’s own personality along with certain advantages making each destination a unique experience. Lets take a look at 4 of the most popular destinations: 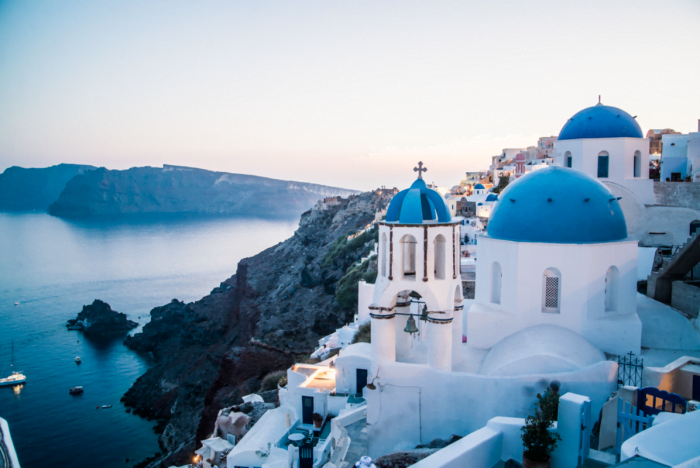 Have you ever seen a photo of the Greek Islands? If you have, there is a 95% chance it was from Santorini. In my opinion it is the most beautiful, picturesque island. Everywhere you look, pastel homes and churches seem to be towering above the sea cliffs. The island was created from a volcanic blast that left a perfect crescent shape in the land. Therefore, from any point on the island, you can look across the water and see another small village cascading into the sea.

This is a place where sunsets burn every color of the rainbow as the sun dips below the sea lighting up the whole sky in beautiful colors. The little village of Oia is the western most village giving you amazing views of the day’s vibrant end.

In the middle of the island there is a monastery that also offers breathtaking vistas of the magical island below. The unique geographical features set this island apart for its beauty and incredible views. However, because of its steep, elevated cliffs, you will not find much in terms of beaches or water activities on this island. That is why you must go to… 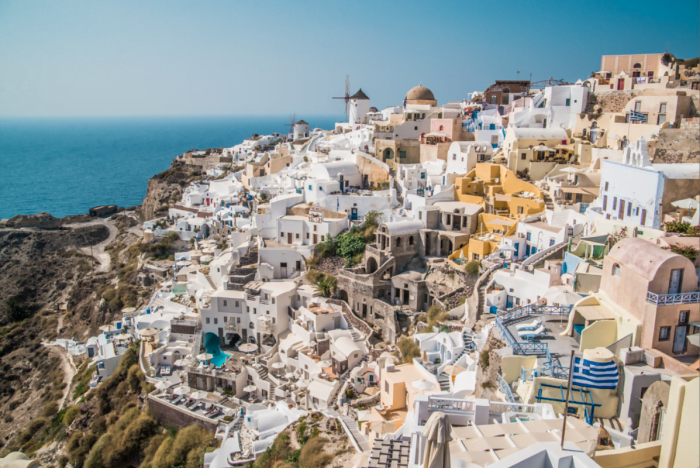 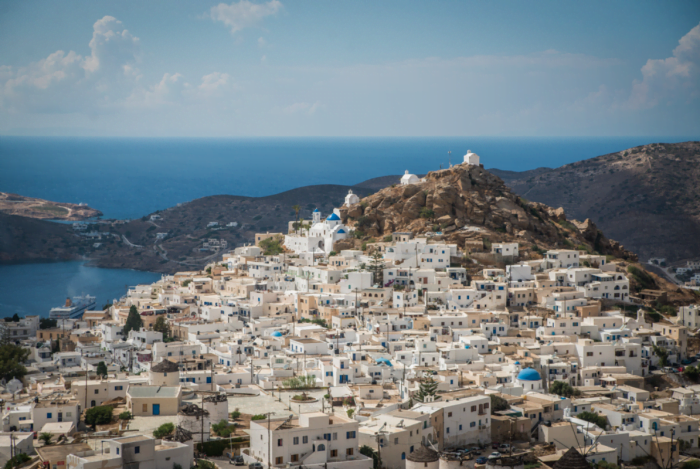 Ios is one of the most relaxed islands in the Greek Archipelago. Just a short ferry from Santorini, this island offers amazing soft, sandy beaches with teal waters suitable for all types of water sports. To cool down, you can grab a snorkel and discover ancient shipwrecks and colorful fish among the nearby reefs. Along the beach there are plenty of restaurants offering all sorts of seafood that was swimming less than an hour ago. Sushi is chopped right before your eyes and rolled to your liking.

A very young crowd fills the island and slowly becomes more lively at night. The Australian flag flies just as high as the Greek flag as most of the summer workers come from the land down under to avoid their winter. In the morning, the small town will bear witness to a few elderly locals milling about, but as soon as the sun is down, the streets start pumping music of every genre. The once quiet, relaxed atmosphere is replaced with a party that goes until the sun comes up. Little bars and clubs come alive, yet none of them are large enough to hold more than 100 people, hence the world’s best pub crawl begins as you wind your way through the tiny Greek streets from party to party. 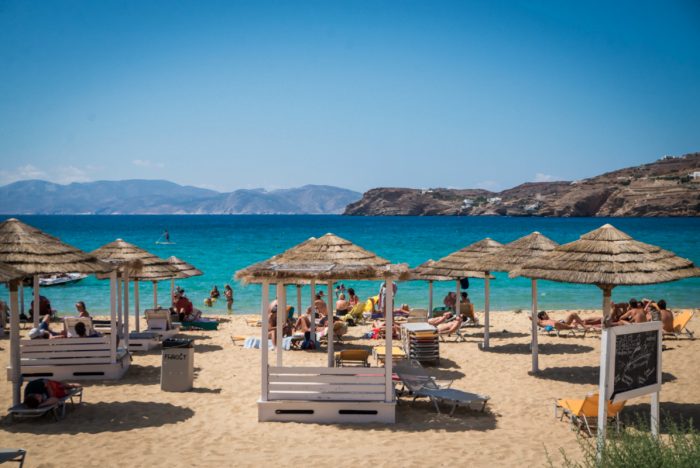 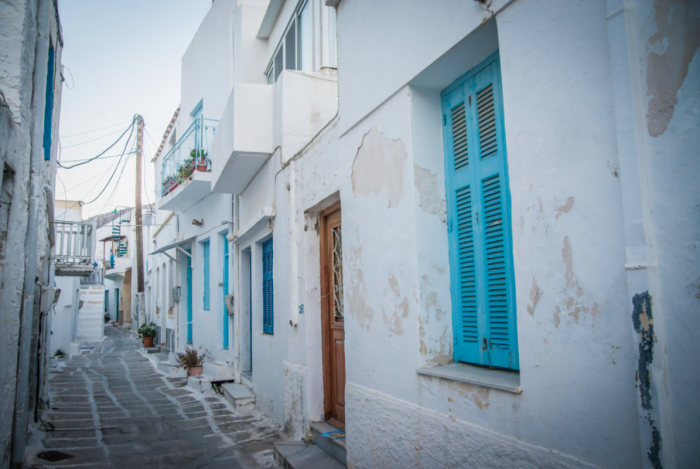 If you have come to Greece to soak in the culture, Paros may be the right island for you. Amidst the beautiful beaches and iconic, white-washed backstreets of this quiet island, you will see children running around with their backpacks, men gathering with their newspapers and coffees, and women watering the flower baskets in the windows.

The island offers visitors cultural dinners with traditional dancing, plate smashing, and some of the most authentic homemade Greek food. Things are calmer here than on some of the other islands. You can easily find backstreets unoccupied and slowly meander through the scenic laneways by yourself.

Cruise out of town and you will find unspoiled beaches that feel as though they’re being seen for the first time. Off the coast, instead of extreme water sports and scenic cruises, you may witness a fisherman pulling in an octopus or some other catch of the day. This island is the real escape and transports you to a foreign culture deep in the Aegean Sea.

You may never want to leave such a peaceful place, but if you are looking to liven things up and dance the night away, you might want to go to… 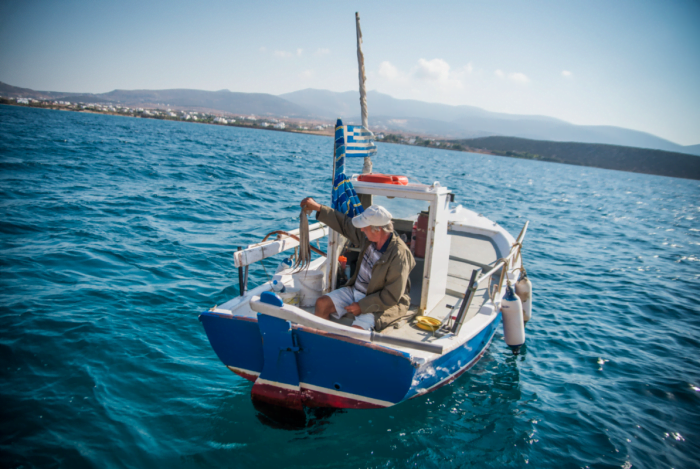 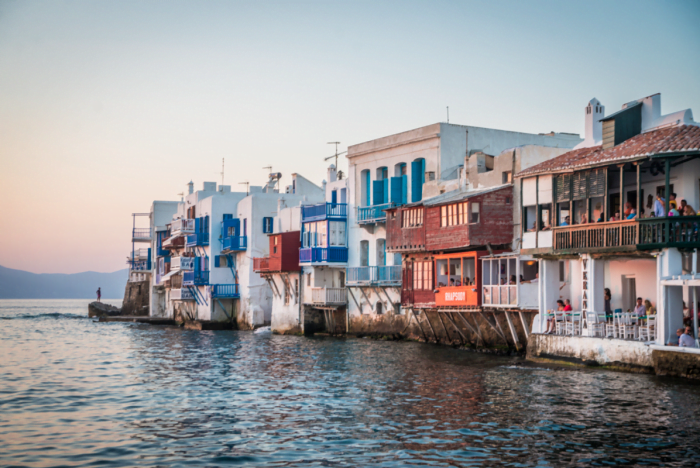 If you want to be by yourself on a remote island, Mykonos is not the place for you. The island welcomes thousands of tourists everyday, all looking to soak up the sun and then live it up at night.

The island is famous for its iconic windmills that reach out into the sea. Little Venice hosts a handful of colorful cocktail restaurants, fashion designers line the winding streets with the most eclectic clothing, and the harbour is filled with tables as the evening crowd gathers for a seaside dinner. Those not quick enough to find a seat on the waterfront can meander into the labyrinth of streets to one of the many restaurants spilling inland.

Once the lights go out, the flames and lasers take over as the beach party begins to heat up. The clubs that hosted thousands of sunbathers by day will have just as many excited guests dancing to the day’s most modern beats. There is nothing quite like a night in Mykonos and that’s what makes it a great way to end an amazing tour through the Cyclades. 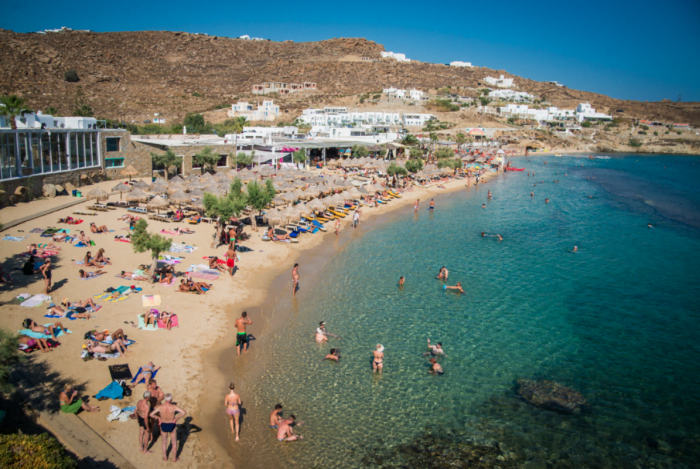 There are so many Greek islands beyond just these four and so many other characteristics and qualities that they each hold. These four give you a great spectrum of the views, culture, beaches, and parties that the islands have to offer.

A whole summer wouldn’t be long enough to find all the secret spots and beautiful scenery of the Greek Islands, but even if you only make it to a handful of these, it’ll be enough to show you the diversity of the archipelago. Bon Voyage! 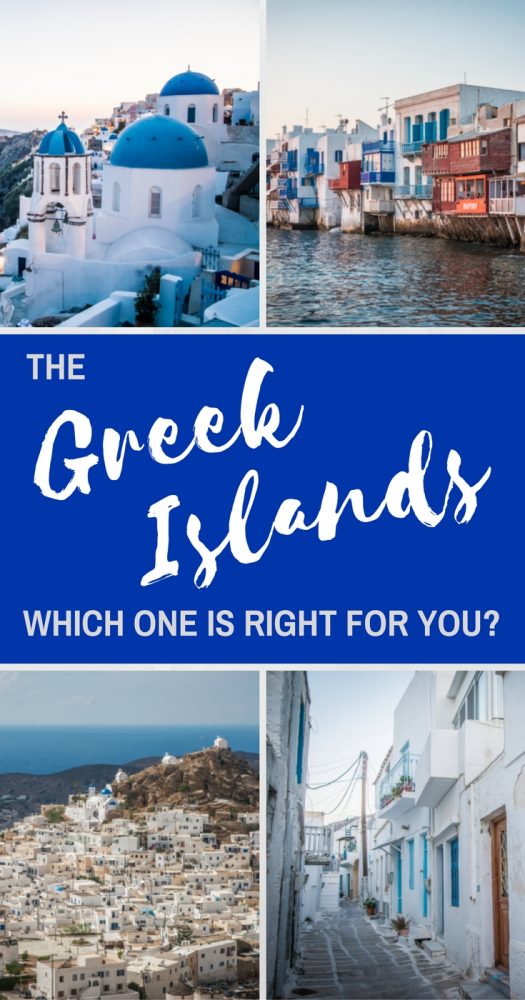 Now the question is: Which Greek island would you choose?