Despite its over-touristed nature and pricey reputation, Santorini was planted firmly on my Greece travel wish list; visions of its sheer cliffs, whitewashed villages, and sapphire-toned seas had occupied a corner of my imagination for years. And, after finally visiting this summer, I was surprised to find it had exceeded my expectations. The views were even more spectacular and dramatic in person: the Aegean a deeper shade of blue, the buildings painted an almost blinding white.

Numerous moments stand out in my mind when I think of Santorini, but the following highlights are the reasons I fell so hard for this striking volcanic island. 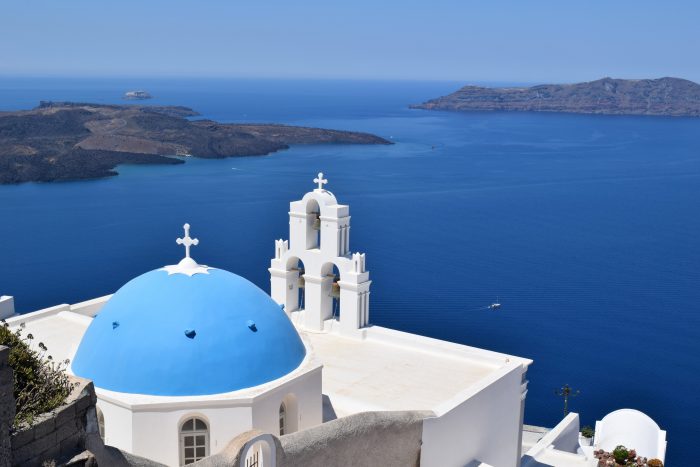 From quiet breakfasts overlooking the Aegean to lunches in traditional Greek taverns, and lengthy dinners in the warm glow of the sunset, mealtime on Santorini was always a pleasure. Between platters brimming with freshly caught seafood from Volcano Blue in Fira, baked feta with tomato, fresh herbs, and chili from Melitini in Oia, and squid ink risotto from Kapari in Imerovigli – every meal was divine. 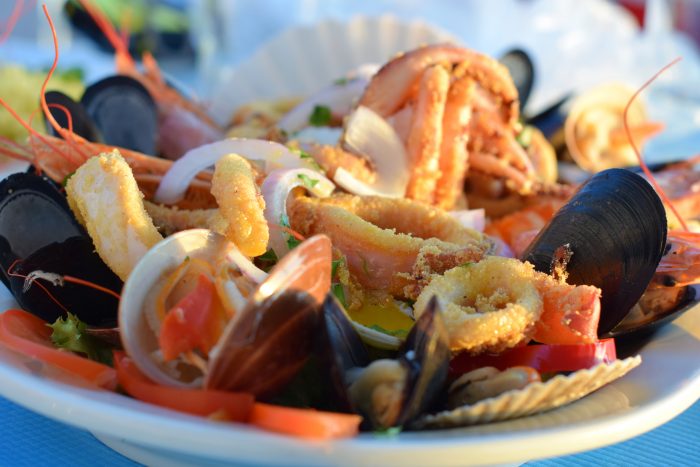 As for drink, I’m not referring to the country’s national spirit of Ouzo, (the after-effects of which would most definitely fall into the ‘lowlights’ category), but rather the island’s wine. Hopping on a guided tour allowed me to delve into every aspect of Santorini wines, from the vineyards to the production process to the finished product. Despite the hostile environment, Santorini produces surprisingly refreshing and aromatic wines. They’re most well-known for crisp, citrusy whites, and Vinsanto: a sweet, syrupy dessert wine. 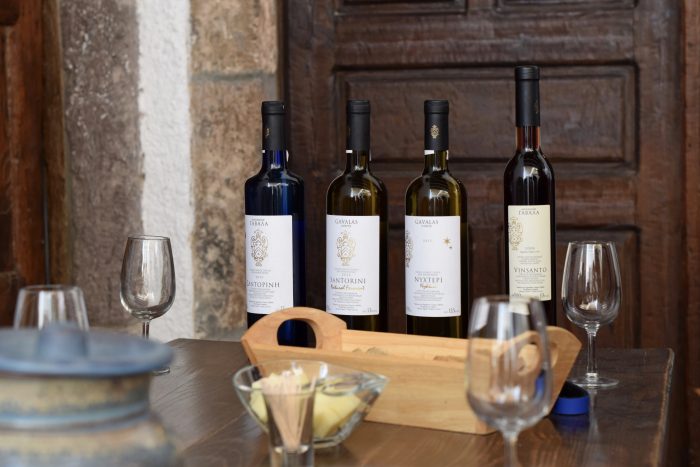 Santorini’s sunsets are world renowned for good reason. Dusk becomes a vibrant spectacle as the sun dips below the horizon and the sky is illuminated with vivid shades of reds, oranges, and purples, the colours reflecting off the calm surface of the sea.

Oia is the most infamous sunset spot on the island, and the view from Oia castle is a great vantage point to watch as the whitewashed houses change from pink to gold and blue in the reflection of the ever-changing sky. Fira also offers fantastic sunset views, without the hassle of having to fight your way through the crowds that inundate Oia. The placid village of Imerovigli is the highest point on Santorini, with an expansive view of Oia and the neighbouring island Thirassia. 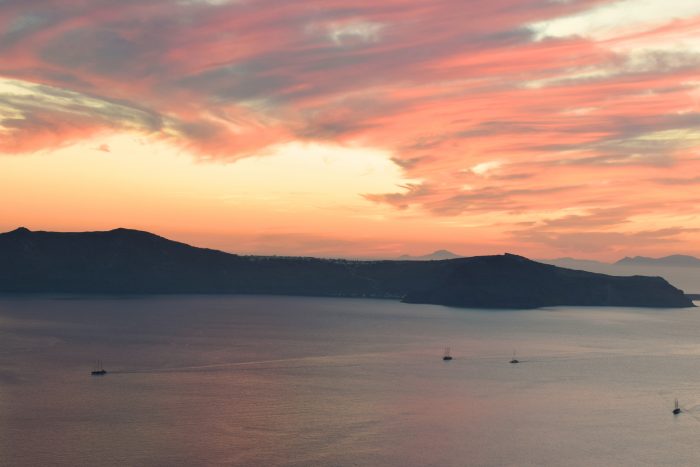 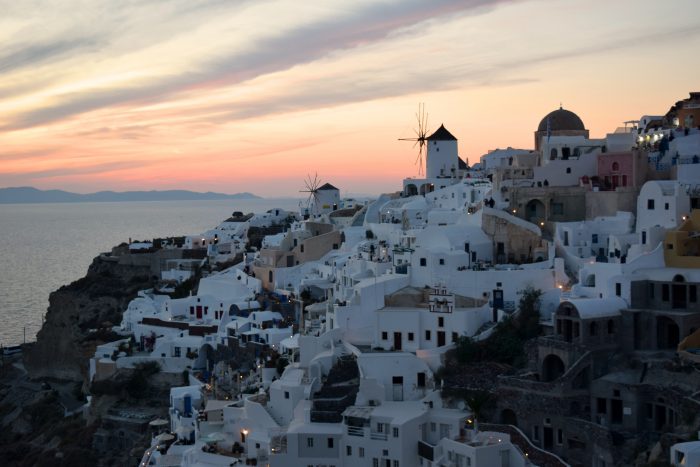 Accommodations are normally the last thing I choose to splurge on when I travel, but I knew I had to make an exception for Santorini. I had visions of staying in a dreamy caldera view hotel with a private infinity pool overlooking the sea.. until I realized that, no matter how badly I wanted to splurge, I could never afford a caldera-facing hotel in the height of the summer. Then I happened to stumble upon Vallas Apartments – a charming hotel with a handful of rooms, a beautiful caldera view, and a reasonable price tag. Vallas Apartments is situated in the charming village of Firostefani, which is close enough to walk to the bustling restaurants of Fira, and yet far enough to watch the sunset from the hotel’s private patio in blissful silence.

The village of Firostefani has a traditional charm, with its narrow, cobbled alleyways and laid-back atmosphere. It’s the antithesis of Oia’s busy, manicured streets; in lieu of designer boutiques and luxury hotels you’ll find smaller family-owned accommodations and cheerful, reasonably-priced restaurants. 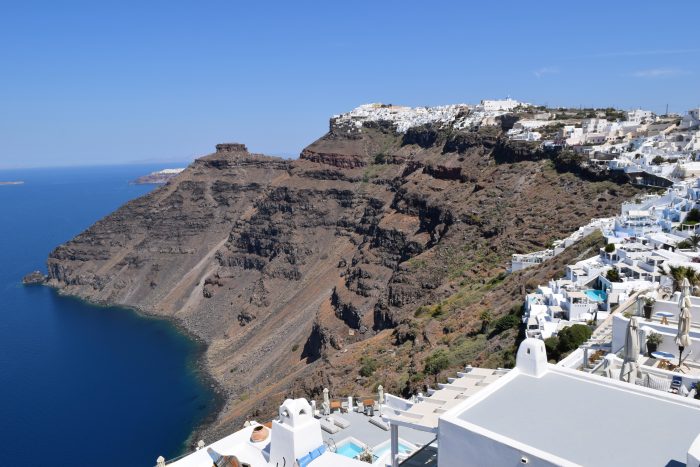 Santorini’s beaches are mostly clustered on south-east side of the island, and Kamari is one of the most accessible beaches in the area. Its setting is striking – sitting at the foot of Mesa Vouno mountain, nestled between its surrounding cliffs. The long stretch of beach is covered with black pebbles, a stark contrast to the azure blue waters, and the promenade is lined with bars and restaurants.

I spent my afternoon here sunbathing, sipping on cheap Greek beer, and taking an occasional dip in the crystal clear water. It was a beautiful spot, and the perfect introduction to a lesser-known side of the island. 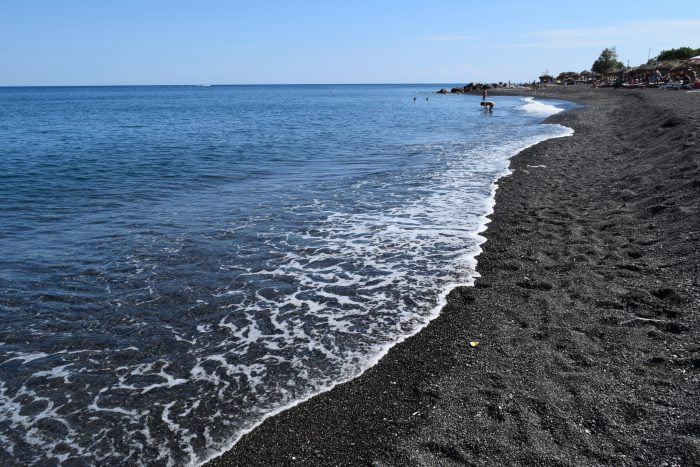 Have you been to Santorini?
What were your favourite highlights?