Deep in the heart of Turkey, there sits a civilization that is so magical and full of wonder. A landscape filled with the most unusual landforms, it’s as if the whole place were a fairytale. Towers of colorful rock jut out of the desert landscape, dotted with caves that tell stories of an ancient humanity. Modern-day hotels are built into the rocks, and so are the restaurants and shops to avoid the oppressive heat of the desert sun. Tourists can climb to the top of historic fortresses that were carved out of the mountains, giving sweeping views of the surrounding dunes. As the sun rises, so do hundreds of balloons that add to the peaceful serenity of this ancient wonder. Welcome to Cappadocia! 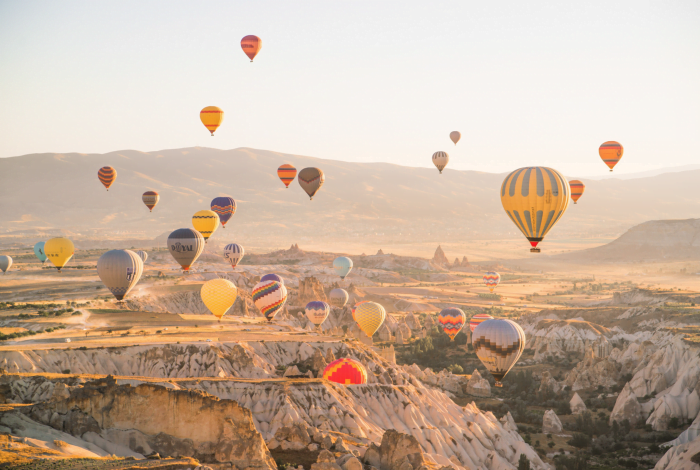 I will never forget the first time I saw a photo of this region. I thought it was a movie set from a fantasy film or a modern-day adaptation of the Flintstones. Ribboned stones seemed to ripple across the landscape. Large rock pillars reached for the sky with little holes carved throughout. Huge boulders balanced on top of even larger boulders. Houses seemed to be built on top of each other in haphazard ways that seemed to defy all laws of gravity. Above all, the entire sky was filled with colorful balloons that just added to the mystery and intrigue of such a fantasy land. From the moment I saw that photo, it became my life ambition to see this place for myself, and experience its magic firsthand. 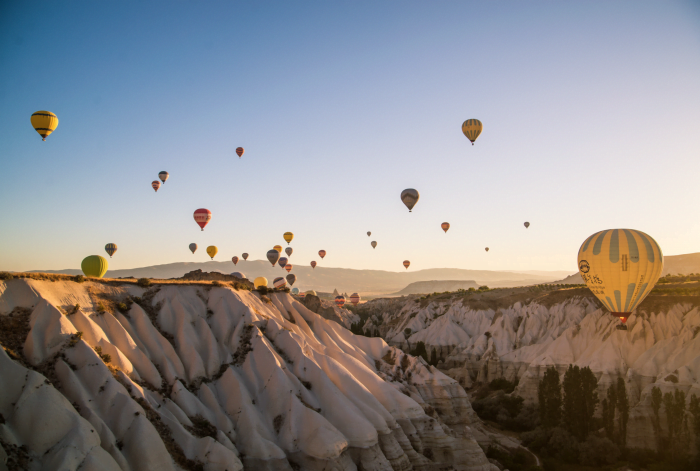 Five years later I found myself on the tail end of a journey across the Silk Road from Beijing to Istanbul. Upon entering Turkey, I made every effort to make sure my path would cross through this magical land. When I arrived, I soon learned that Cappadocia was so much more than just one little settlement, but it was a network of small villages that were dispersed amongst this unique landscape.

Each village has its fair share of wonder, filled with small cafes and hotels, but I would recommend making Goreme your base. It is the most central of the villages and has a wide variety of lodging options. Luxurious resorts and budget hostels are found side by side in the rocky canyon of Goreme. Many of the more cultural shops and restaurants can be found in the town center and most importantly, every morning at sunrise, hundreds of hot air balloons launch just outside of Goreme in the Fairy Valley. They slowly float above the small town as you eat your breakfast on the many rooftop patios! From Goreme it is very easy to find transport to all of the other villages, but I found the most convenient way was to rent a scooter (the cost was around $45 for 24 hours), which also allowed me the flexibility to stop anywhere in the desert along the way.

Places to visit in Cappadocia

Since Goreme is the hub for most tourists, this village will offer many recreational activities and have many shops and restaurants to choose from. You can rent ATV’s, scooters, sign up for day tours and balloon tours here. It is just a short walk out of town to the Cappadocian historical center where you can learn more about the history and the people that once lived here. Horse back rides are offered at the stables near by and Fairy Valley is also an easy hike from town. It is a bit busier, and maybe less cultural because the village caters to tourists, but it is a convenient landing point for many activities throughout Cappadocia. Make sure you spend at least one sunset here from the view point that looks over the small village. 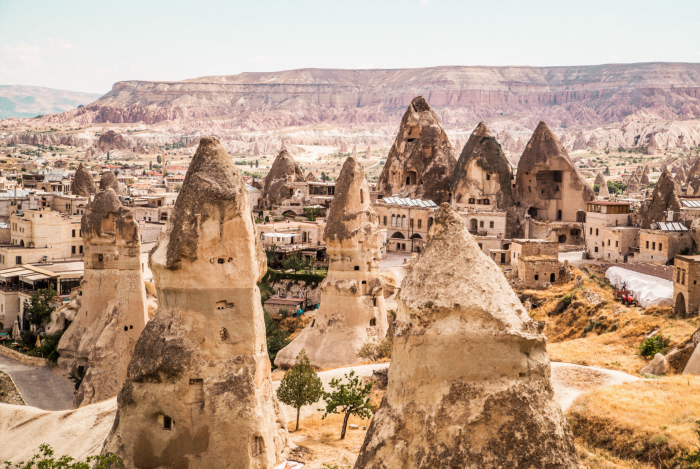 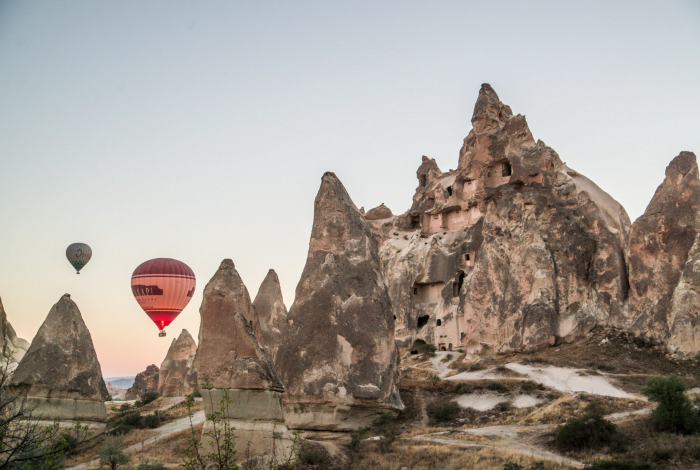 If you start by going a mile or two north, you will soon be riding through Fairy Valley. Fairy Valley is the primary balloon launching ground. If you arrive before sunrise, there will be hundreds of balloons lighting up the valley as they prepare for the flight. It is a very magical experience to watch as huge, colorful balloons seem to effortlessly float above giant stone pillars. Suddenly the sky is filled with dots of balloons.

As you hike through Fairy Valley you will see ancient cliff dwellings built high into the rocks and remnants of the footholds that once made these dwellings accessible thousands of years ago. All throughout the vast valley there is a network of hiking trails that will lead you to different vantage points and offer amazing views of the unique rock valley. 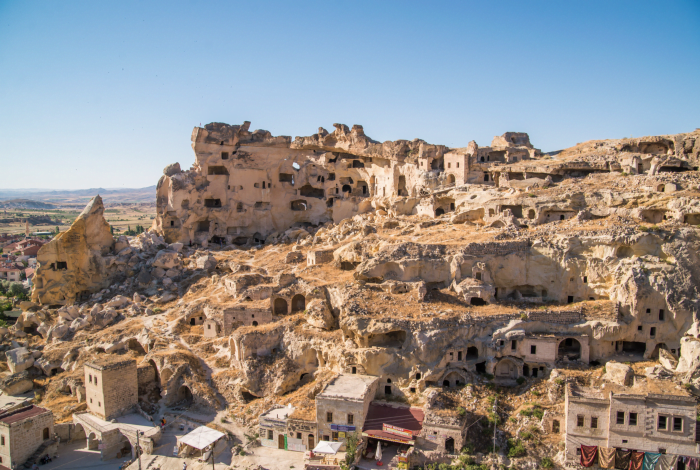 Just a few miles north of Fairy Valley is one of the smallest villages of Cappadocia. There are amazing ruins carved into the cliffs, yet most of the dwellings are inaccessible to tourists and not inhabited by shops and restaurants like most of the other villages in the region. Instead, there are a few homes and restaurants at the base of the cliff that are operated by the locals. Culturally, it may be the most authentic town in the region where you will see old men and women tending to the fields and carrying water from the nearby river. Few tourists make the effort to explore this tiny village, but those that do are rewarded with a very authentic Turkish experience. 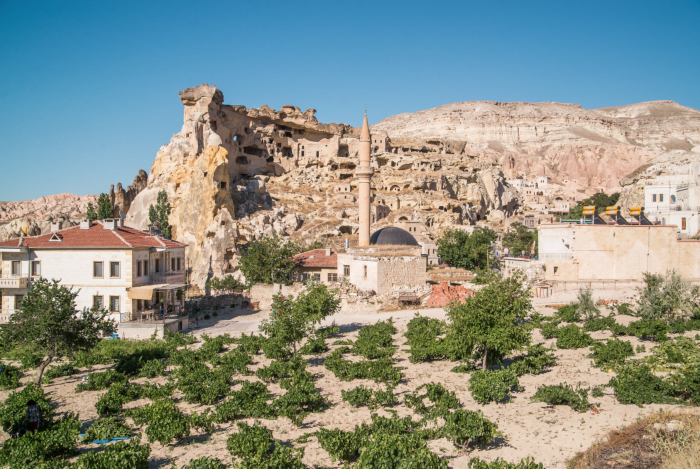 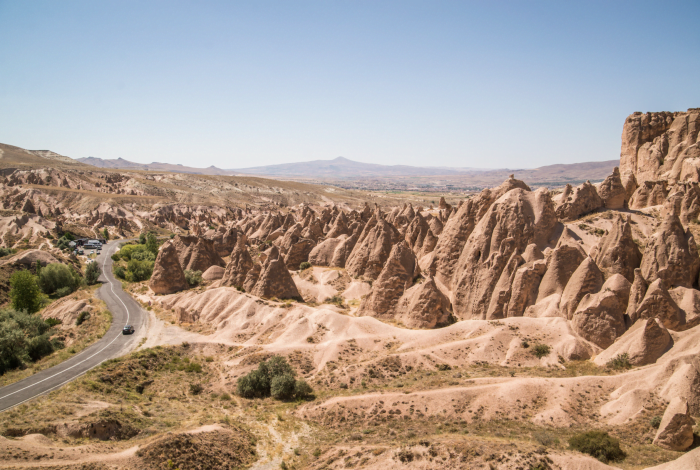 Turning south-east, your ride will take you through a long stretch of open desert. Through the twists and turns, the flat desert will suddenly reveal huge rock pillars that, again, create a very mystical landscape. Though no one lives in these valleys now, there are remains and caves that tell tales of an ancient civilization. Pathways through these ancient cliff dwellings are now walked by tourists and camels, as they closely inspect these old caves and climb up to elevated dwellings. The huge pillars of rock create a maze of trails that one can easily get lost in and discover secret caves. These chimney-shaped, balanced rocks were created by the varying levels of erosion that occurred in the different layers of rocks. 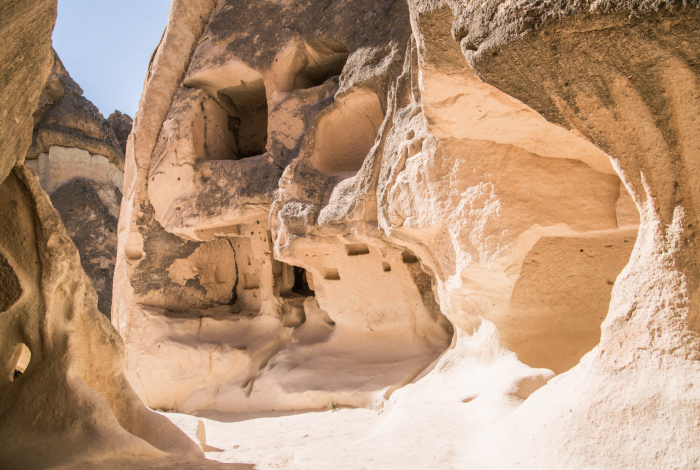 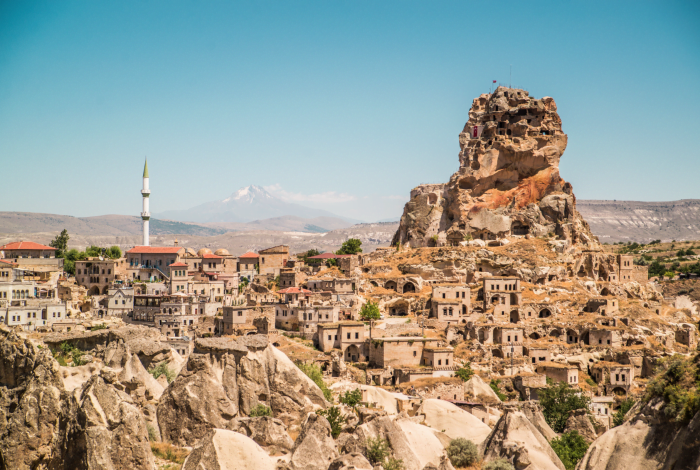 Surrounded by groves of citrus trees, Ortahisar is considered the agricultural supply of Cappadocia. A few storehouses in the town hold ancient wine cellars where old grapes were pressed by foot thousands of years ago. The town remains less touristy than most other towns in the region. Streetside stands are still run by old men selling dried fruit and at the same gambling with the vendor next to his stall. Tea shops fill the open courtyard as men puff on their hookah and sip their ruby red drinks. Goods are still transported down the narrow streets by donkey and young children play their sports in the shade of the back alleys. The town is characterized by the jagged castle that towers over the old city. For a few dollars tourists can climb up the fortified rock and get a clear view of Mount Erciyes (12,848 ft.) and in the other direction can see the other fortified castle, Uchisar. 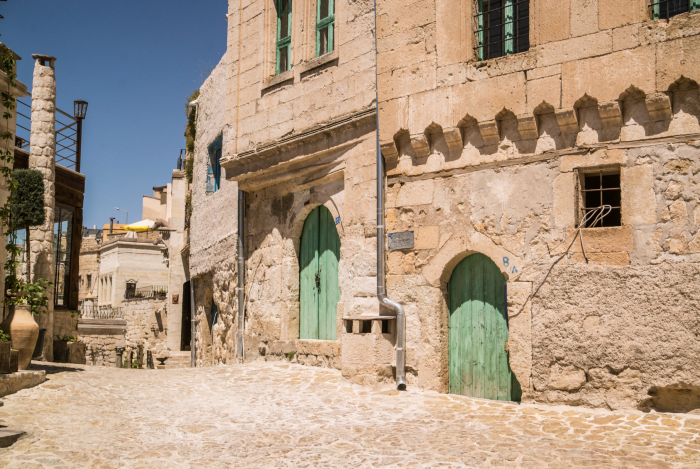 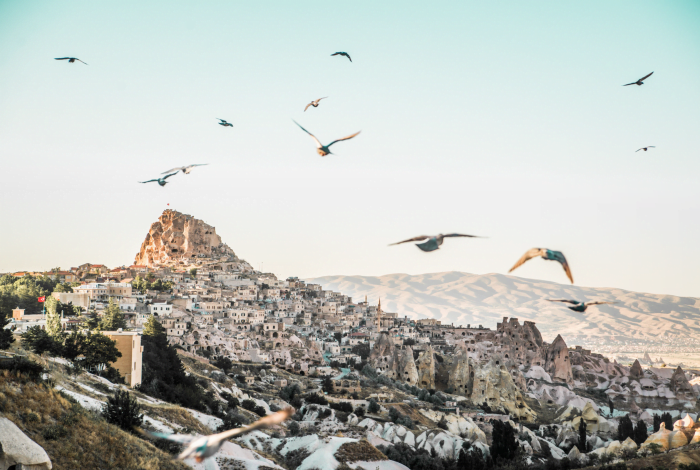 Uchisar is just south of Goreme and sits at a much higher elevation. Uchisar, like Ortahisar, is a town built around a towering rock that was once a fortified castle. Most of the balloon rides float right by the castle on their journey from Fairy Valley. Uchisar is the second most popular town after Goreme, and the sloping hillside is being built up with luxury restaurants and resorts.

Pigeon Valley offers sweeping views of the castle, the village below, and the shifting sand dunes in the distance. Throughout the village there are many traditional Turkish shops selling rugs, lanterns, dried nuts and fruits, as well as exquisite hand made jewelry and metal artwork. The castle is full of hidden passageways that once offered security to the villagers during times of war and the top of the castle offers the best panoramic view of the whole Cappadocia Region. For just $2, tourists can climb through the rock passageways to the top of the castle and enjoy the spectacular views. 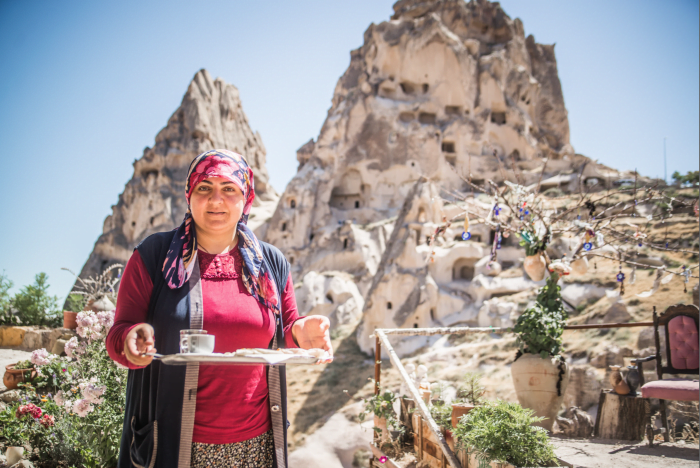 Cappadocia lived up to, and surpassed every expectation I had from that fantasy photo. The entire region seems to be made of a fairy tale. No place on earth quite compares to the combined unique landscape and deep history that Cappadocia has to offer.

Have you ever visited?
What are some of your favourite places in Cappadocia? 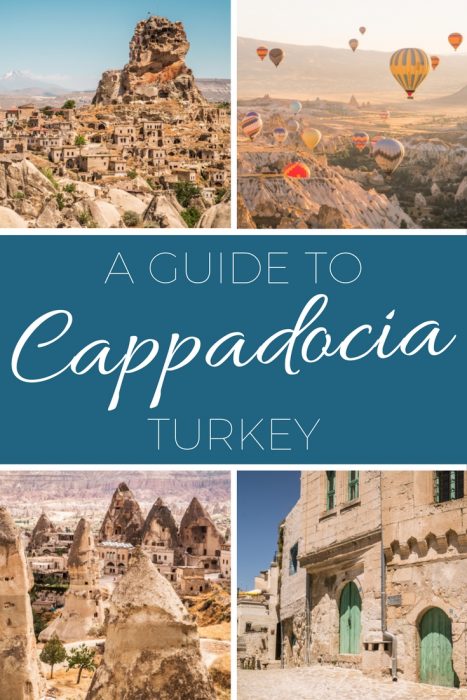