Chiang Mai is a city that feels like my home away from home. Over the years, I have spent many months wintering here while eating delicious bowls of khao soi, sipping on mango-banana-coconut shakes, and exploring the wats sprinkled down the city’s back alleys. I have played tour guide to visiting friends, scouted out the best veggie restaurants, and visited just about every night market in search of street food; I feel like I know the city really well, and yet again, maybe I don’t.

A few weeks ago, TripAdvisor got in touch with me to see if I’d like to try booking a tour through their platform…while I was visiting Chiang Mai. I had teamed up with them back in August to explore Yogyakarta and Central Java – two regions of Indonesia that were completely new to me! – but what could I possibly do in Chiang Mai that would offer a fresh perspective on this blog?

I opened the TripAdvisor app on my phone and started scrolling through the options. Thai cooking class? Done. Visit the Elephant Nature Park? Done. Half day trip to Doi Suthep? Done. Street food tour? Well, that would be a new tour but then again as a self-professed foodie who already spends her free time snacking in Chiang Mai’s markets, I could probably lead that one!

Then I came across a listing for a Half-Day Cultural Tour of Chiang Mai. It had nothing but 5 star reviews, everyone raved about the guide Jack, and I figured touring with a private guide could be an interesting way of revisiting the city.

Jack was waiting for Sam and me in the lobby before we even came downstairs (and I was downstairs early because I didn’t want to keep him waiting!) so I was already impressed by his punctuality.

The plan that day had been to do a tour of the Old Town mostly on foot, but it was pouring rain with no signs of the clouds parting. Jack told us he was happy to proceed with the walking tour of Chiang Mai if that’s what we wanted, or we could go with Plan B, hop in an SUV, go in search of some lesser known secret temples scattered outside the city, and then warm up with a hot bowl of khao soi.

A car to keep us dry and a bowl of Thai goodness to stay warm? Uhh, yes please! Within minutes Jack had called up his driver and we were on our way.

Our first stop of the day was Wat Palad, a temple tucked in the jungle, surrounded by lush vegetation and the sounds of nature. Wat Palad is on the way to Wat Phra That Doi Suthep – one of the most visited temples in Chiang Mai – but what a difference one detour makes. While Wat Phra That Doi Suthep charges an entrance fee, always has big crowds, and has a few too many touts, Wat Palad was a tranquil oasis.

Jack told us this is his favourite temple in Chiang Mai, and I could easily see why; the temple had a series of terraces and bridges that criss cross a small stream, there were statues of nagas (serpents) and singhas (lions) standing guard, and with the thick fog hanging over the landscape, it all looked quite magical. We took our time exploring the temple with umbrellas in hand and even managed to snap a photo or two.

From there, we continued to Wat Umong, also known as the Tunnel Temple for the series of caves built into the landscape. Story has it that these tunnels were built to prevent a highly revered monk, who was slowly losing his mind, from wandering off into the jungle for days at a time.

Before entering the tunnels, Jack took us to what can best be described as a Buddha graveyard. Here we learned that locals often bring old statues or broken images of Buddha to find a final resting place in the temple grounds; because the image is sacred, they can’t dispose of it by throwing it away, so what you get is an outdoor graveyard of plastic, porcelain and stone Buddhas.

We then continued towards the tunnel, where we had to remove our shoes before setting foot on the cool ceramic floors. The temple itself is a small network of tunnels and caves with Buddhas resting at the end of each passage. Also, this temple dates back to the 13th century, but you can still see faint paintings on some of the tunnel walls, which is pretty amazing!

With two temple visits under our belts, it was time for some food, so our guide took us to “Khao Soi Lam Duan” for a bowl of the authentic stuff!

This is one of my favourite northern Thai dishes and it is made with soft rice noodles and crispy rice noodles in a coconut and curry based soup. It is traditionally served with chicken (though you can get pork or vegetarian options) and you can also add things like lime, shallots, and pickled cabbage to make it a little more tart. We also ordered a side of chicken satay with a thick peanut sauce. Suffice it to say that we ate every last bite and drank every last drop!

The restaurant itself is located outside the Old City on the northwest corner, so it’s not a place I would have ever found on my own, but if you’re in the area it’s worth seeking out. It’s very much a local place and it was filling up with families by the time we left.

With bellies full it was time to visit one more temple, Wat Chedi Liam, which like the previous two temples we visited, was completely new to me.

What makes this temple unique is that it was built in the town that was the capital of the Lanna Kingdom before the city of Chiang Mai was even founded, and it’s also the only remaining structure in Chiang Mai to be built in the style of the Mon Kingdom, which was powerful in Burma at the time.

Here Jack pointed out some of the stylistic differences – like how the lion you see is called a ‘chinthe’ instead of ‘singha’ (and it looks slightly more Chinese in style), and how the chedi is topped with a hti, which is a Burmese multi-tiered spire in the shape of an ornamental umbrella.

And that’s the cool thing about having a guide like Jack around – had I been visiting these temples on my own, my eye would not have been drawn to these subtle differences, and I would have missed out on the back history of the kingdoms that ruled and influenced the architectural landscape of Chiang Mai. 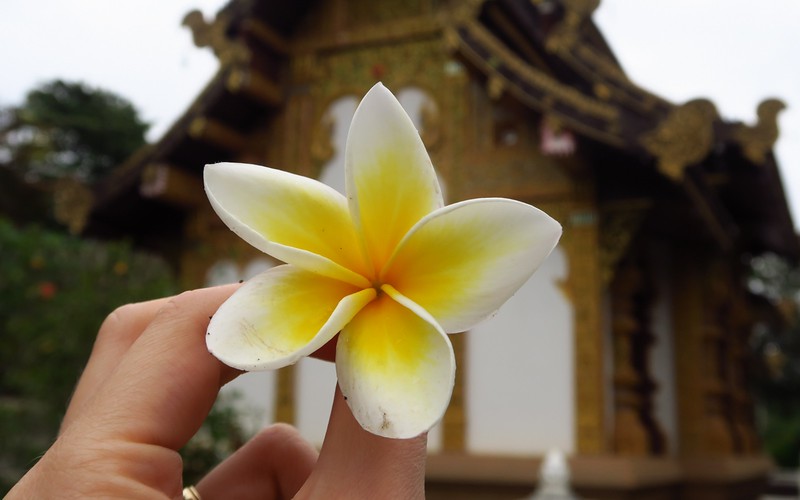 Now that I’ve told you all about the tour itself, let’s talking about the TripAdvisor booking experience, choosing the right tour, and most importantly, would I do it again?!

I’m sure we’ve all used TripAdvisor to research things to do in a particular destination. In my case, I usually use their app to find restaurants near me and see what others have to say. With more than 435 million reviews – that’s a whole lot of opinions! – I feel like TripAdvisor really has the ground covered when it comes to offering up advice and suggestions from fellow travellers. And you know I take my reviews seriously because I’ve been contributing my own since 2008 – that goes back to the pre-blogging days! All this to say, detailed reviews matter to me. A lot.

Filtering them by categories

Another feature I like is being able to sort tours based on interests. For example, if you’re a foodie you can click on the Food & Drink tab, which features cooking classes, street food tours, and tea plantation visits; if you’re outdoorsy you can click on the Outdoor Activities tab, which includes overnight treks, river rafting excursions, and zip lining adventures; or if you’re looking to relax you can click the Spas and Wellness tab, which highlights spa getaways, massage courses, and yoga workshops – and that’s just a small selection of what you can find in Chiang Mai.

One thing that I discovered while researching tour options in Chiang Mai, is that not all business listed on TripAdvisor can be booked through the platform. This is because businesses must meet a certain criteria in order to be made available through TripAdvisor, which means that while there were fewer tour options in Chiang Mai, those listed had very positive reviews and high star ratings ranging from 4.5-5 stars. My guide and my tour experience definitely lived up to their rating!

But really, are there any downsides?

The main thing to mention is cost. Booking a tour through TripAdvisor is slightly more costly than walking into a random tour agency in Chiang Mai. That being said, you are getting a completely different product.

I can honestly say that Jack is hands down one of the best tour guides I’ve ever had, not just in Thailand, but in all my travels.

He was friendly from the get go, knowledgeable about the city, ready to answer all of our questions, flexible with the schedule based on our preferences, prepared with a backup plan in case of rain, but most importantly, you could tell that he was passionate about his job and about Chiang Mai.

I’ve done budget tours in the past where I was crammed in a van, driven from site to site, and rushed by a surly guide (the incident on the Mekong Delta comes to mind!), but if I’ve learned one thing over the last few years of travel, it’s that you get exactly what you pay for; and these days, I’m willing to pay extra for an experience I’ll truly enjoy.

Lastly, I think the biggest reminder of the day was to never stop exploring, because you just never know what you’ll find in a place that you think you know like the back of your hand!

This article was written in partnership with TripAdvisor, but all opinions expressed here are mine alone.