We visited Pula in October hoping to catch the last rays of summer in this popular holiday hotspot. Pula is a small city in the southern part of Istria, the heart-shaped peninsula in northwestern Croatia, and it draws huge crowds during the summer months, both for its beaches and its famed film and music festivals. Well, we may have missed all the buzz, but we still managed to have a wonderful time in Pula during low season.

Since we travelled by bus by way of Italy and Slovenia, reaching Pula meant travelling the full length of Istria and we were amazed by the scenery outside the window. We went past fields of green in the form of olive groves and vineyards, roads lined with Italian Cypress trees, and hilltop towns dominated by orange rooftops and church bell towers. Istria was love at first sight, even causing us to switch up our Balkans travel itinerary so that we could spend a little more time along the coast and a little less time inland.

In total, we spent a week in Istria and this is a little taste of what we got up to in Pula:

We kicked off our sightseeing in Pula with a visit to the city’s best-known attraction: Pula Arena! This Roman amphitheatre is an architectural behemoth that dates back to the 1st century. It was built during the reign of Emperor Vespasian, at the same time the Colosseum in Rome was going up.

What’s even more shocking is how well preserved it is; this is the only remaining Roman amphitheatre with all four side towers and three stories still standing.

We walked past the arena on our first day in Pula as we were going to check into our apartment and what a sight that was! We were up and early the following morning ready to explore the inside.

It is believed that the amphitheater could seat about 20,000 spectators – gladiator fights would have taken place in the arena while spectators sat on the stone steps – but this structure would not go forgotten after the fall of the Roman Empire; during the Middle Ages, this is where knights would have held their tournaments and fairs.

Tip: During the summer months, Pula Arena puts on “Spectacvla Antiqva”, an event that reenacts gladiator fights and games from Roman antiquity. Alternatively, you can buy a ticket to one of the many concerts or films that are screened in the amphitheatre as part of the summer music festivals and Pula Film Festival.

From there, we also made time to visit the Roman Forum, which was the main square and the centre of social, religious and political life during Roman times. 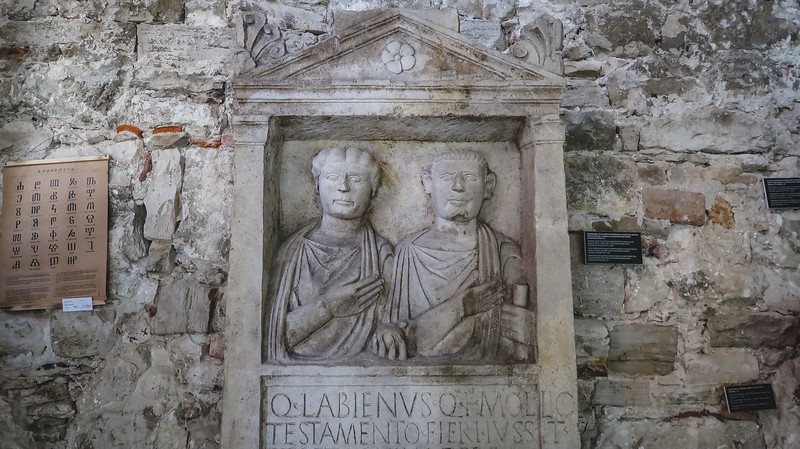 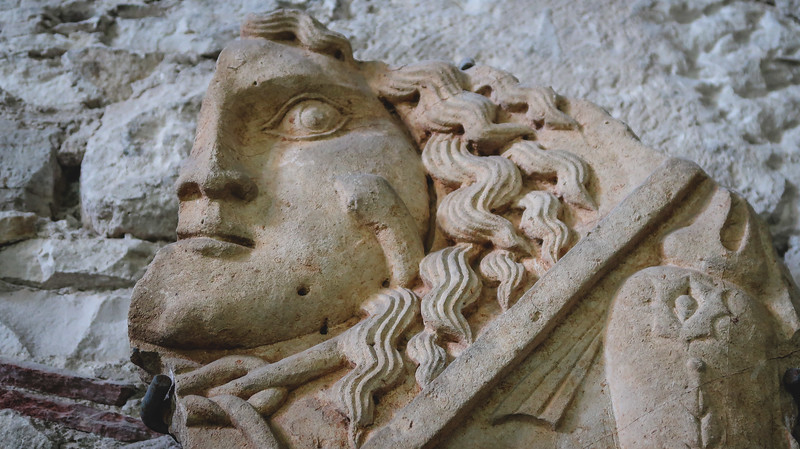 Over the course of the centuries, the Temple of Augustus has seen many uses from a Christian church to a grain storehouse, but at present, it houses a very small 1-room museum – and when I say small, I mean you can visit in 5 minutes! Inside you can see a small collection of sculptures, reliefs and statuettes.

Tracking down the Roman Mosaic

And speaking of the Romans, another cool site not too far from the Forum is the Roman Mosaic. This incredible well-preserved floor depicts the Punishment of Dirce, which is straight out of Greek mythology.

The mosaic is tucked away in a bit of an inconspicuous location, but it’s easy to find if you know how to get there. The best thing you can do is plot “Roman Floor Mosaic” on GoogleMaps, which will lead you to a parking lot off Ulica Benediktinske opatije.

You might think you’re off course at this point, but keep going. Walk through the parking lot until you see a set of gates on the left-hand side – it’ll look like you’re walking into the back entrance of a building complex. As soon as you walk through the gates, you’ll be able to see the mosaic on your right. A fascinating slice of history right under your nose!

Eating the best pizza in town

Now for our favourite restaurant in town, allow me to introduce you to Pizzeria Jupiter! We found this place pretty early on and we ate here once a day the whole time we were in Pula.

I know you’re probably wondering, “Pizza in Croatia? What are you doing? This isn’t Italy!” but to be fair, Istrian cuisine does have a strong Italian influence and their pizza is amazing. 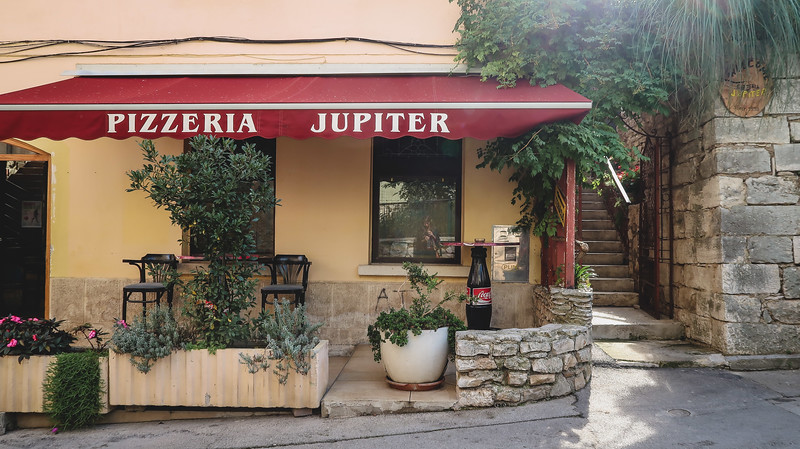 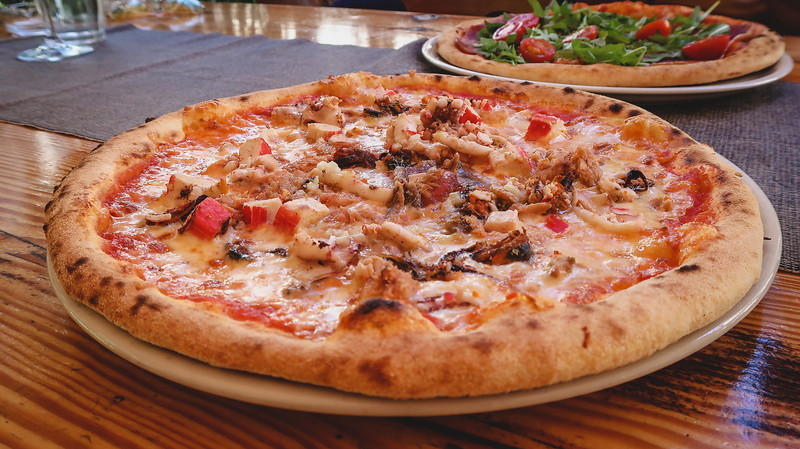 Sampling all the artisanal gelato

And speaking of food, we somehow managed to book ourselves into an apartment that was right next-door to a gelato shop, so needless to say, we were regulars at that place!

Over the course of our stay, we became very well-acquainted with Slastičarnica Fortuna – a fourth-generation gelato shop! – and we soon befriended one of the great-grandsons who worked there. Sam was all about the pistachio and I was super fond of anything with berries, so I had a new flavour to sample each day.

Getting lost in the Old Town

Another thing we did plenty of in Pula was walking around without much of a plan. I’m someone who just enjoys wandering up and down back streets admiring the architecture, popping into shops, and snapping photos along the way. Pula’s streets are perfect for this with so many impressive gates, cobbled lanes, and surprising facades. 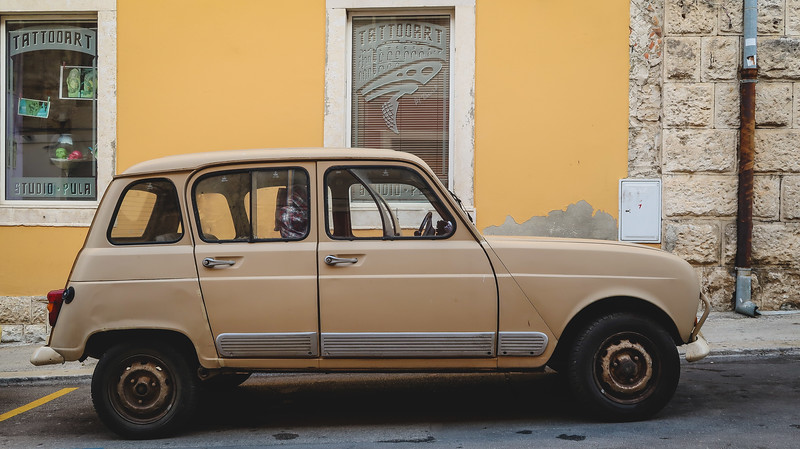 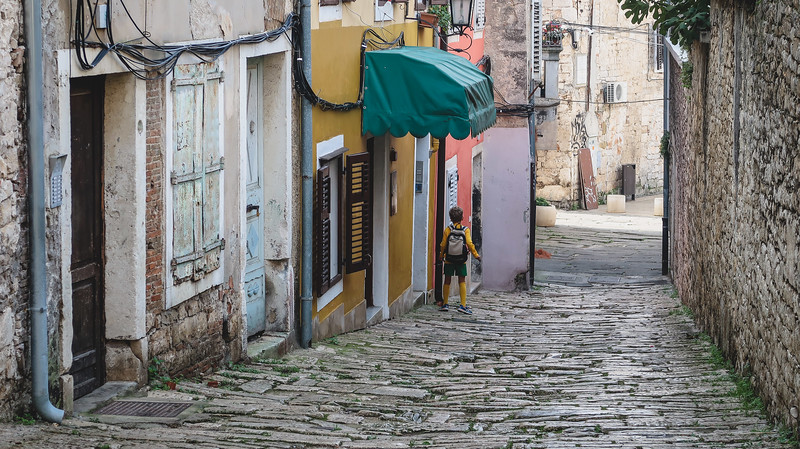 If you prefer a bit more structure to your wanderings, try walking the length of Kandlerova, Forum and Sergijevaca; this is one street that runs through the Old Town in a horseshoe formation, changing names along the way.

This will take you past the cathedral, the tunnel network known as Zerostrasse, the Roman Forum, the Temple of Augustus, the Roman Mosaic and the Arch of Sergii just to name a few. You can also use this walk to scout out some restaurants or do a little souvenir shopping. 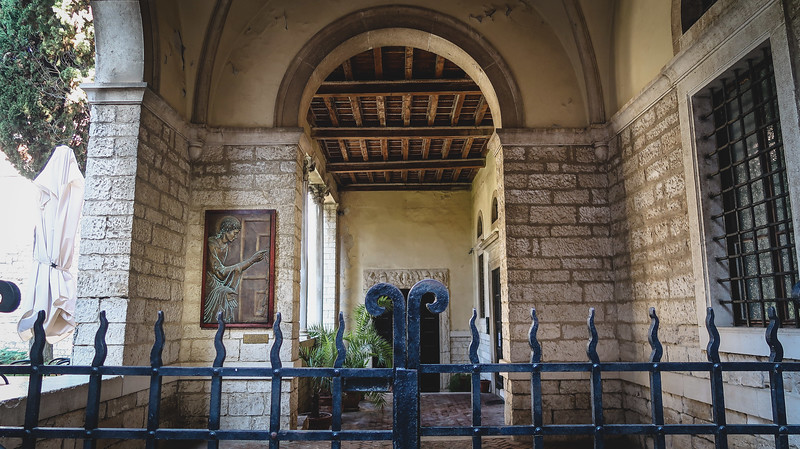 Enjoying a walk along the marina

Another thing you can do in Pula is go on a boat cruise. The most popular destination is Brijuni National Park, a group of 14 small islands that sit out on the Adriatic Sea.

The islands have a few archaeological and cultural sites and though admission to the park used to be free, these days you have to join one of the official excursions arranged by the park or local tourist agencies. 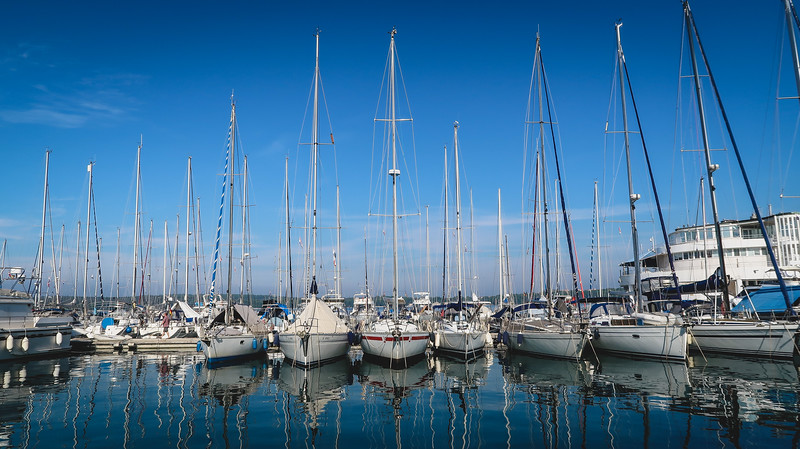 I tend to get super queasy on boats, so we ended up skipping this and wandering along the marina instead, but if you want to see more of the Istrian coast, this is a really popular day trip from Pula. To arrange an outing, you just have to walk down to the marina where you’ll find a row of tour operators offering different trips including a few sunset cruises.

Climbing the fortress for city views

Next up, for city views we walked up to Pula Castle, also known as Kaštel. This is an old fortress situated on a hill right in the centre of Pula and it was built by the Venetians during the 17th century. 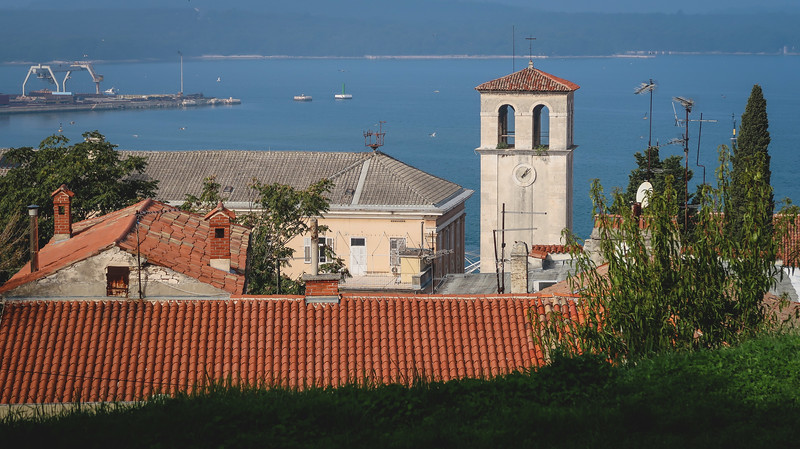 The fort houses the Historical and Maritime Museum of Istria, but I would say the main draw are the views you get.

We visited Pula during the low-season and even though the locals insisted “the water was warmer than the air” and still okay for a swim, I felt otherwise! I may not have gone for a swim, but I can agree that Valsaline is a beautiful beach and I can only imagine the crowds it draws during the summer months.

Since I’m no expert on summer in Pula, here’s a link to some of the best beaches in Pula for you to take your pick. 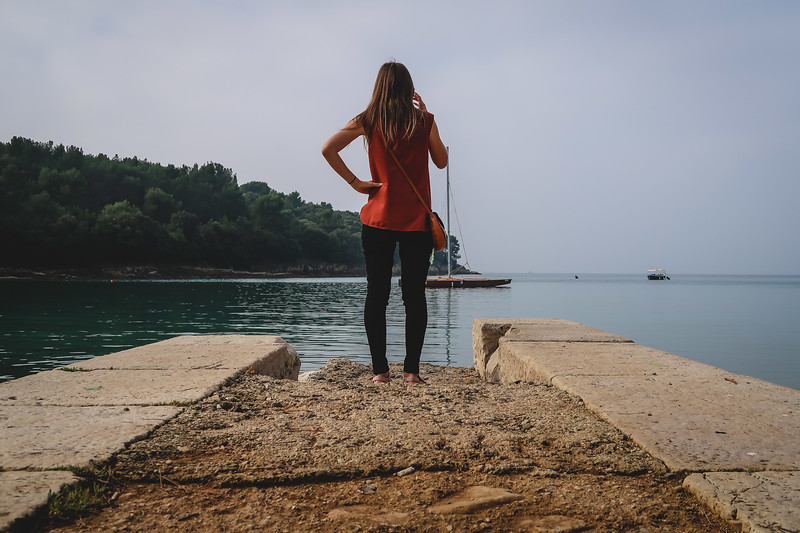 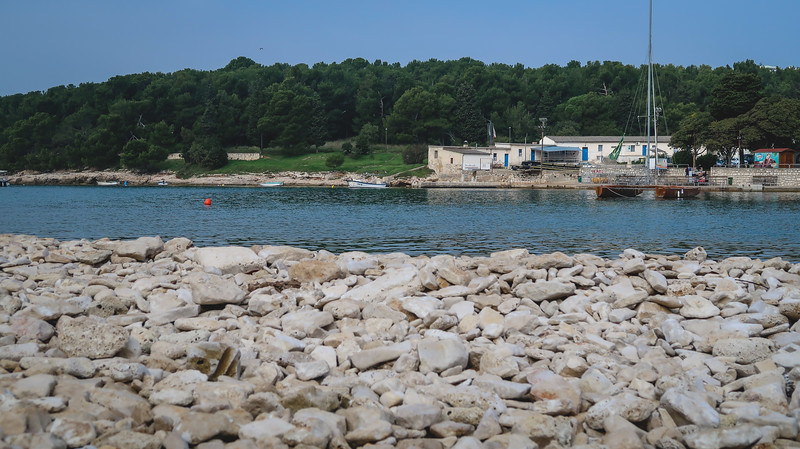 Where to stay in Pula

We had initially considered visiting Pula in the middle of summer, but the prices scared us away. Like most of Croatia’s coastline, Pula too is a summer hotspot, so not only where most properties already booked up for July and August, but the remaining ones had ridiculous price tags – we’re talking about $100/night for tiny studios.

By comparison, visiting during the low season, we were able to get a 1-bedroom house in the heart of the city for $40/night, so that’s something to keep in mind. You can get a better idea of rates for accommodations in Pula here.

As for location, Pula is fairly compact and walkable, so anywhere in the Old Town is a good place to stay.

Weather in Pula in October

So, Pula in the off-season – what was the weather like?

We were there in mid-October and though that late summer warmth was gone, it was still pleasant. The temperatures were about 16-20°C during the day, but would drop down to 6-10°C at night.

Mornings and evenings in Pula were usually foggy with mist rolling in from the water. In the mornings, I would leave our place wearing a scarf and a jacket, but then by mid-morning, I’d be peeling off these layers and basking in the sunshine in my short sleeve.

I do think this is still a nice time of year to be in Pula if beaches and summer rays aren’t your top priority. Locals told us how the summer months can be a bit stifling (one of them said that by the end of summer he’s wishing for rain!), so I thought the cooler weather was ideal for long days of wandering around on foot.

Have you been to Pula?
What were some of your highlights?