After a few days visiting Pula, we decided to take a day trip to Rovinj, a town that sits on the western coast of Croatia‘s Istrian peninsula. Rovinj is about a 40-minute bus ride from Pula, so we figured we’d go spend the day, enjoy some seafood and maybe hop over to the nearby islands.

Well, the weather had other plans. By the time we reached Rovinj, the day was looking decidedly autumnal: overcast, windy, and threatening of rain. We scrapped our plans of island hopping – the Adriatic wasn’t looking particularly inviting! – but we still managed to have a nice day exploring Rovinj while ducking into cafes, restaurants and gelato shops along the way.

This is a little taste of what we got up to on our day trip to Rovinj: 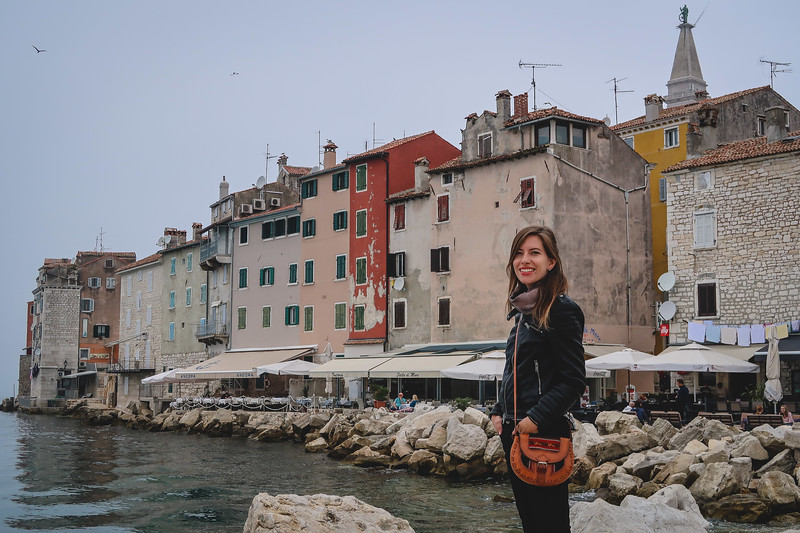 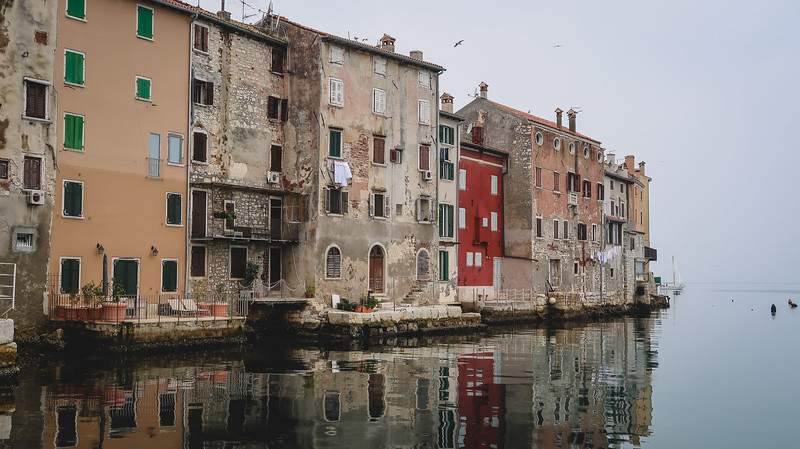 Walk up, down and around the Old Town

My favourite part of our day trip to Rovinj was getting lost in the Old Town. Rovinj is a maze of narrow little streets, staircases, archways and courtyards, and losing yourself here is the best way to enjoy the magic. 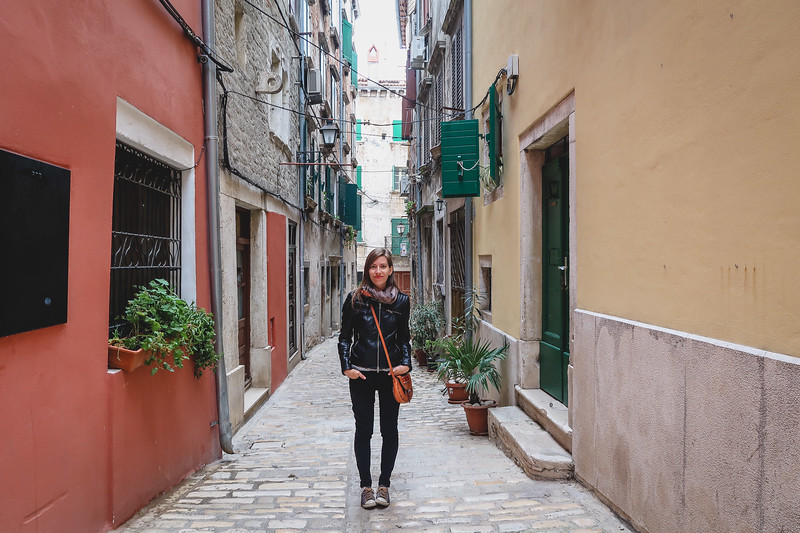 This is a town where white stone buildings and colourful facades collide, where rows of laundry are hung out to dry from windows, and where you can feel the influence of Venetian style (Rovinj was once part of the Venetian Empire). 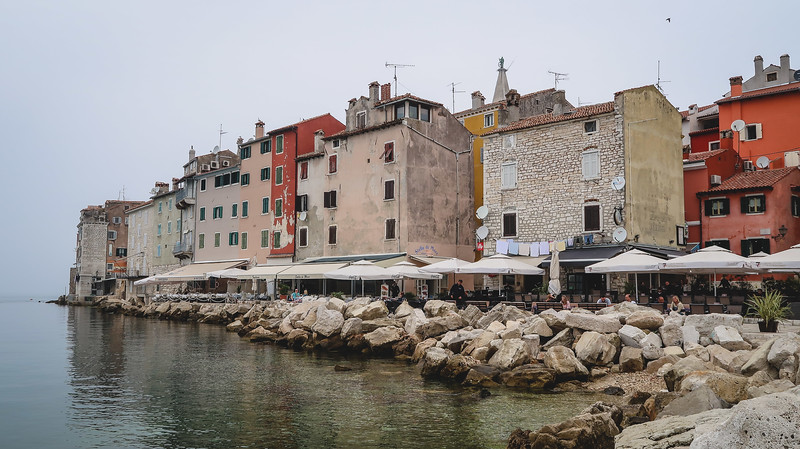 I had initially plotted a few potential museums to visit, but in the end, I left my phone in my purse and just had fun wandering around aimlessly.

Wander the marina and have gelato

Like I mentioned earlier, initially, we had been hoping to visit St. Andrew’s Island and St. Catherine’s Island which are just a short ferry ride away, but with gloomy skies over us, we settled for a walk along the marina. There are some great photo-ops along here, and lots of gelato shops as well! 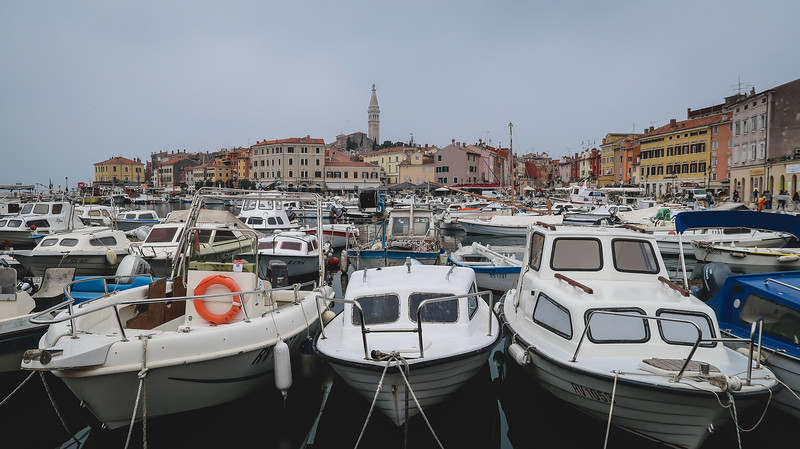 Enjoy a seafood lunch by the water

For lunch, we opted to eat at a seaside restaurant called Stella di Mare. Since they specialize in seafood, I ordered myself a risotto with shrimp and Sam went for a shrimp pizza.

Aside from the view, my favourite thing about this restaurant were the two cats going from table to table waiting for a piece of octopus, mussel, or scampi to fly off the plate and land at their feet. These may be the most well-fed cats in the town; we later found them napping the afternoon away at the marina. 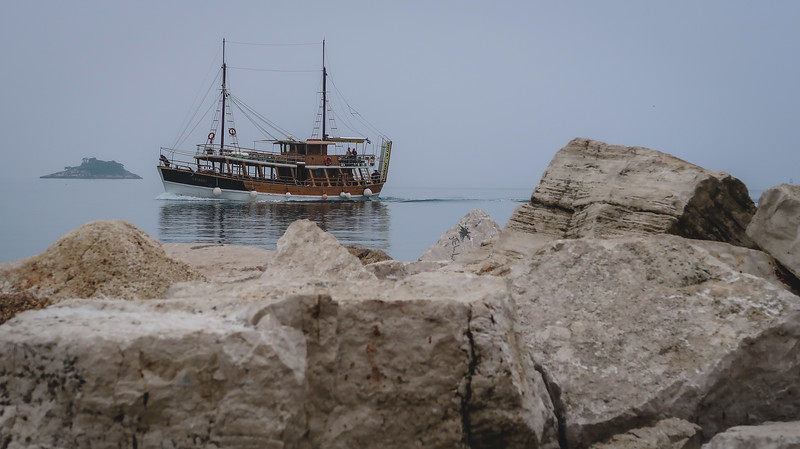 Oh, St. Euphemia’s! The average visitor walks to the top of the hill, has a look inside the church, and then makes their way back down; but the brave, they tackle St. Euphemia’s infamous wooden steps up the bell tower.

Unfortunately, we were not in the first group…

St. Euphemia’s steps have a reputation that precedes them: creaking, uneven, and sweat-inducing are a few words to describe them. There’s a photo of the steps posted on a billboard as soon as you enter the church so that you know what you’re getting into. Few pay the fee to go up, and out of those who do, not everyone reaches the top.

But hey, they must be sturdy enough if they let people climb them, right?!

Sam attempted the tower without success. And me? I was perfectly content to enjoy the views with my feet on solid ground.

Stock up on truffle products

Another placed we visited was Rovinj Market, which is a covered outdoor market.

It has a wide assortment of fresh produce, but the reason to come here is to stock up on all kinds of truffle products; we’re talking truffle oil, truffle carpaccio, truffle salt, whole truffles, and the list goes on.

If you’ve never tried truffles before, do so while you’re on the Istrian peninsula! They’re known to produce some of the highest quality truffles in Croatia and once you’ve had a taste of them, there’s no going back.

Shop for jewellery, art, and ceramics

If you’re interested in doing a bit of shopping, Rovinj has that too.

As you walk up to St. Euphemia’s, you’ll notice the street is lined with shops where you can get one of a kind jewellery in bright turquoises and corals, handmade ceramics and clay pots, and cheery sardine paintings to remind you of your seaside visit.

Lastly, to finish off the day, we made it down to one the best sunset spots in all of Rovinj: La Puntulina.

Technically, this is a restaurant, but since we had spent most of the day eating, we opted for drinks. You only get a table if you’re eating at the restaurant, but they have a terrace that leads down to the water with lots of mats and pillows scattered around and that suited us perfectly.

If you’re visiting during the high-season, another sunset bar to add to your list is Valentino’s. We had initially planned to go there since it spills down to the water, but they were closed for the season. 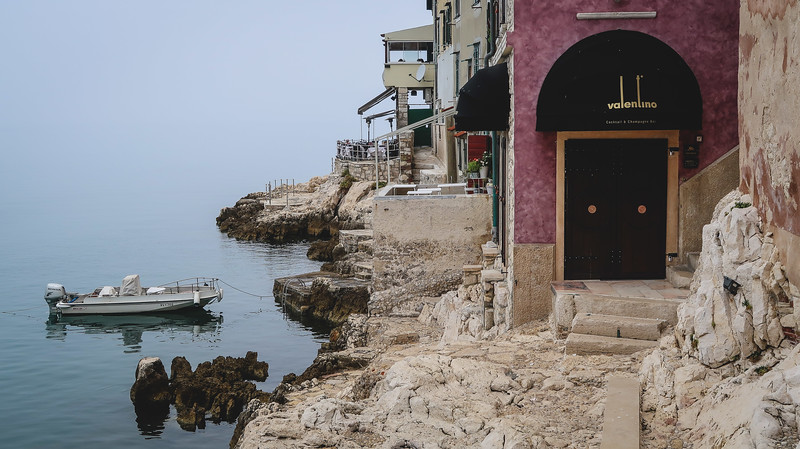 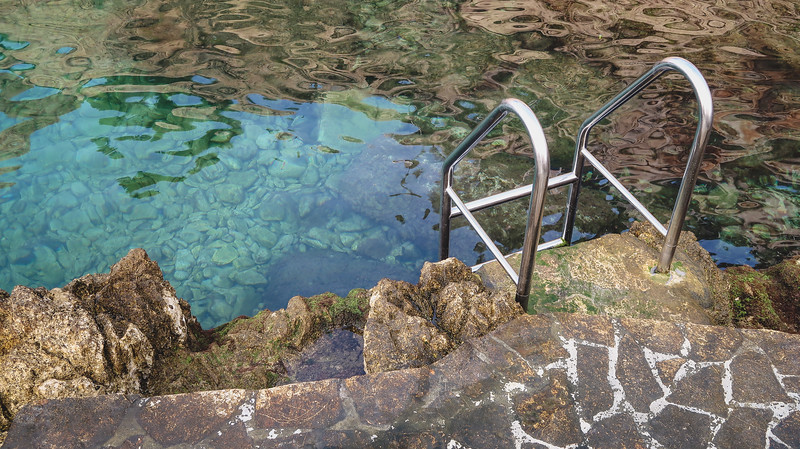 Can you visit Rovinj in a day?

If you’re pressed for time, you can certainly visit Rovinj in a day, and see most of the main attractions. The Old Town is quite small and compact, so it’s very easy to cover on foot.

If you have 2-3 days to spare that’s even better. Rovinj is exactly the kind of town that I would enjoy lingering in; it has a laid-back feel, but it also has lots of restaurants, cafes and gelato shops to fill your day once you’ve seen the sights. You can get more ideas of things to do in Rovinj in this travel guide.

If you’re planning a longer trip to Istria, I think Rovinj makes an excellent base. We chose to stay in Pula which is in the southern tip of Istria (and we really enjoyed it!), but Rovinj might have been preferable for planning day trips to other neighbouring towns since it’s centrally located meaning you have shorter distances to travel.

Have you been to Rovinj?
Did you do a day trip or stay longer?