The Northern Lights, also known as Aurora Borealis, are one of the most beautiful phenomena in the world. The lights appear when electrically charged particles from the sun race towards Earth, and then collide with gases in the Earth’s atmosphere.

One of the reasons you can only see the Aurora Borealis in the far north (or the Aurora Australis in the far south) is because the Earth’s magnetic field pushes those particles towards the poles. This means catching the lights usually involves quite the journey, however, it’s worth it to witness this natural wonder.

If you’re looking for a place to see the elusive Northern Lights in Europe, we have a few destinations where you are very likely to catch the lights painting the night sky. 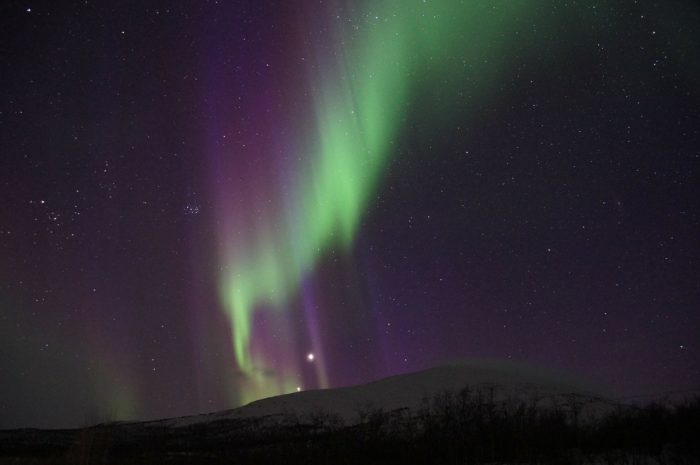 If you want to see the Northern Lights in Sweden, your best chance is to head to Swedish Lapland between September and March. Again, the rule of thumb when chasing lights is that the further north you travel, the higher the likelihood of seeing the lights.

One particularly popular spot in Sweden is Abisko National Park, which is home to the Aurora Sky Station. The station is situated on Mount Nuolja, about 900 meters above sea level, in an area that has very little light pollution to distract from the night sky.

Where to stay in Abisko:

A trip to Finland is amazing no matter what time of year you visit, but winter in Lapland is especially magical. Did you know that in Finish Lapland it’s possible to see the Northern Lights up to 200 nights a year? You can begin to see the Aurora Borealis here as early as late August, and your chances increase the further north you go.

One of the best places to see the lights, as well as experience a unique culture, is Inari. Set on a lake some 250 kilometres north of the Arctic Circle, Inari is the Finnish capital of the indigenous reindeer herding Sámi people and it is steeped in a rich heritage.

With more reindeer than people calling this place home, there is practically no light pollution, meaning you can just wander out to the lake and watch the magic unfold.

Where to stay in Inari:

There are several excellent places to see the Northern Lights in Norway, but Alta continually comes out on top of every list. This particular destination is home to the world’s first Northern Light Observatory and it has even earned the nickname “The Town of the Northern Lights”. Another cool reason to visit is to see the famed rock carvings of Alta; this is Norway’s only prehistoric World Heritage Site and it’s made up of some 6000 carvings.

When it comes to spotting the auroras, the best time to do so in northern Norway is between late September and early April. Of course, you could get lucky and see them outside that window, but you do have less hours of darkness on your side.

Where to stay in Alta:

Iceland has quickly become another popular destination for a European holiday chasing the lights. Not only is the scenery in this country jaw-droppingly beautiful, but from September to mid-April you also have the possibility of seeing the Northern Lights. The one thing to note is that while November through February are the darkest months of the year, they are also the cloudiest, so it really all comes down to luck.

Northern Iceland is home to some of the most dramatic scenery including thundering waterfalls and geothermal hot spots, so this can make for some great photography. Akureyri in particular is considered the unofficial capital of the north, plus its small population and low light pollution make it a good spot to chase the auroras. Just be sure to bundle up warm, because it can get pretty cold out there!

It’s possible to see the lights from Reykjavik, but of course, the further North you can get, the better your chances.

Where to stay in Akureyri:

Scotland is often overlooked as a place to see the Northern Lights in Europe, but during those cold and dark winter months, the skies in northern Scotland can really light up.

While it’s a bit of a journey to get there, the Shetland Isles are an ideal destination. This archipelago is made up of more than 100 islands, 15 of which are inhabited. The isles also happen to be closer to Norway than mainland Scotland, so we’re talking pretty far north!

Also, this is a beautifully rugged and secluded destination, where you can explore a unique cultural heritage and learn more about the Vikings who left their mark on Shetland, which sounds like a pretty cool way to pass time while you wait for the lights.

Where to stay in Shetland:

Where do you like to chase the Northern Lights?