Today, I’m going to be telling you all about our visit to the wine region of Saale-Unstrut in the state of Saxony-Anhalt, which just so happens to be the northernmost of Germany‘s 13 wine-growing regions.

Saale-Unstrut is known for its quality wines and their wine history dates back over a thousand years, with the first vines being cultivated by monks in the year 998 AD!

This is a place where terraced vineyards come spilling down the hills, where medieval castles sit atop clifftops, and where churches stand guard in the heart of the old town. We’ve said it before, and we’ll say it again – Germany has some pretty magical destinations to discover.

We did everything you might expect from a wine region – we toured vineyards, sampled wines, and even spent the night in a wine hotel. However, we also learned that Saale-Unstrut has plenty to offer beyond its wine. We also visited castles, climbed up to the attic of a cathedral, and took part in a forging workshop all in one day.

We had a really fun day experiencing Germany’s northernmost wine region and below are some ideas for your own visit:

We started the morning with a guided walk through the town of Freyburg, which is considered the wine capital of the region.

We found the town full of charm and very pleasant to walk around. Homes and businesses were painted in cheerful pastel shades, there were vines crawling up the side of buildings, and we also noticed rooftops with eye-shaped windows that kind of made it feel like we were being watched from above. 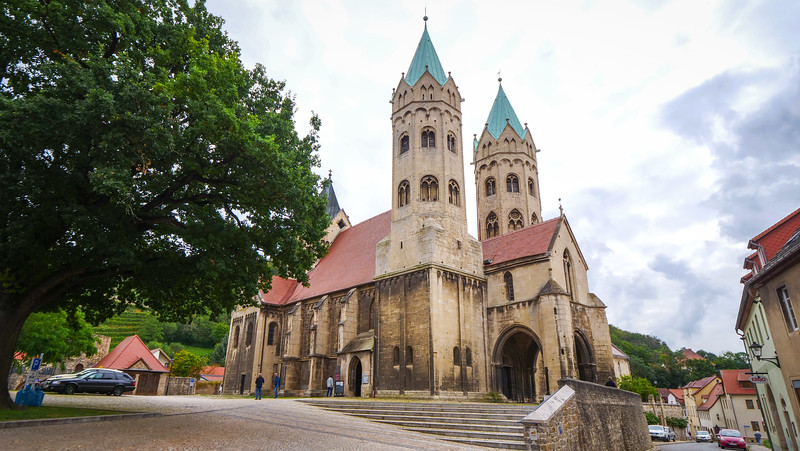 During our walk through Freyburg, we visited St. Marien, a Lutheran church in the centre of town. It is considered the little sister of Naumburg Cathedral, which we would visit later on in the day.

Of course, the main thing that caught our attention walking through Freyburg is that we were surrounded by vineyards, vineyards and more vineyards! Yes, we knew we were visiting a wine town, but I don’t think we were expecting the vines to be right in the town and so accessible!

Shop for sparkling wines at Rotkäppchen

Speaking of wine, one of the most popular stops in Freyburg is Rotkäppchen-Mumm, a winery that dates back to 1856 and specializes in sparkling wines.

They offer tours in German, but another option, if you don’t speak the language, is to just visit the shop and peruse their various sparkling wine offerings. Certain bottles can only be obtained at this particular location, so that alone makes it worth a visit.

There are plenty of incredible lookout points in Freyburg and the first one we visited was Klosterkirche Zscheiplitz, also known as St. Bonifatius.

From this point you can enjoy views of the Unstrut River as well as small villages sprinkled across the valley below.

This is probably a good time to tell you that cycling trips are really popular in this area. So if your idea of a good holiday is cycling through scenic countryside, hopping from one winery to the next, and stumbling upon a few castles along the way, well, this is the place with hundreds of kilometres of bike paths along the Saale and Unstrut rivers.

It wouldn’t have been a proper visit to a wine town without also having lunch at a vineyard!

We visited Herzoglicher Weinberg, which is a terraced vineyard that has been preserved in the style of a baroque vineyard from the late 18th century. It sits at the foot of the Unstrut River and it has Neuenburg Castle watching over it from above. This may very well be one of the most scenic vineyards we have ever visited! 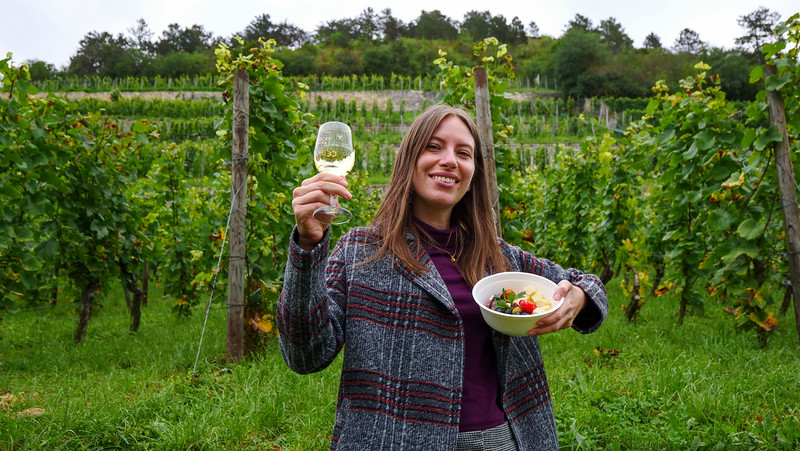 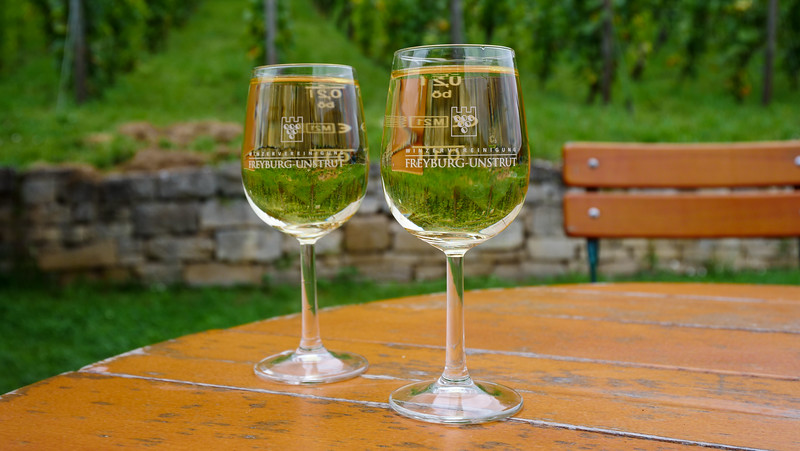 Some of the grapes you can find in this vineyard include Pinot Blanc, Silvaner, and Pinot Noir. We tried a glass of their Pinot Blanc and Sam was exceedingly pleased by the fact that the wine glass was filled right to the very top! We accompanied our wines with a picnic-style lunch featuring cheese, salami, olives, stuffed peppers and dark bread.

It was just what we needed to keep us going and the setting was perfect!

After noticing Neuenburg Castle from the vineyard we just mentioned, we couldn’t resist driving up for a closer look.

This castle was built around the year 1090 by the Thuringian count Ludwig the Leaper, and yes, there is a story behind his name.

According to local legend (which may have been quite embellished over time), after stabbing a ruling Count and then being incarcerated, Ludwig the Leaper leapt from a castle tower into the river. That’s where his servant was waiting for him with a boat and his favourite white horse named Swan, and so Ludwig the Leaper was able to make his perfect escape. That’s the guy who built this castle.

Sounds like the stuff of German fairy tales, but either way, it was a very cool place to visit and the views were as spectacular as you’d imagine.

Next up, we continued to the nearby town of Naumburg to visit Naumburg Cathedral, which recently was recognized as a UNESCO World Heritage Site.

Also known as the Cathedral of St Peter and St Paul, this is considered one of Europe’s most important cultural monuments from the high Middle Ages. What makes it unique is that it’s the only church in the world to contain two choir screens from the high medieval period.

The main attraction is definitely the West Choir, which features 12 statues depicting the church’s top donors dating back to the mid-thirteenth century. Yes, if you gave enough money, you got a sculpture in your likeness placed right in the church for all to see!

These statues were crafted by a medieval stone sculptor now only known as the Naumburg Master. The most famous statue of all is Uta, who is said to depict the “most beautiful woman of the Middle Ages”. Rumour has it she may have also been the inspiration for the Evil Queen in Disney’s Snow White. 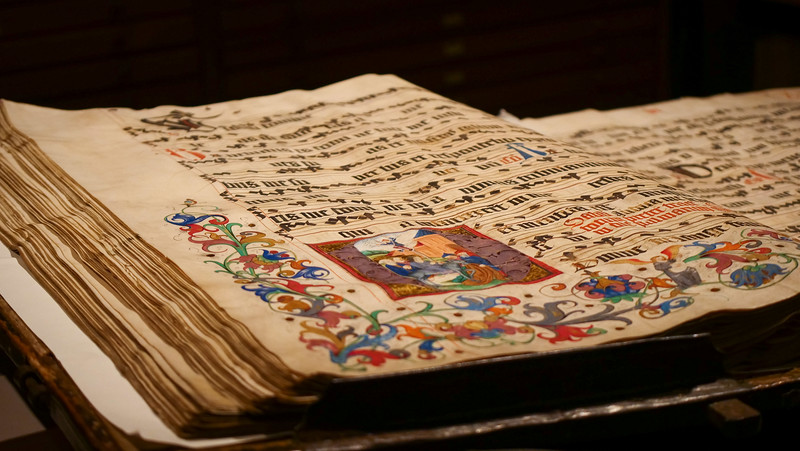 During our guided visit of Naumburg Cathedral, we got to climb up a spiralling staircase that led to the attic, which then led to one of the towers, where you can enjoy views of the town below. We also toured the Cathedral Treasury Vault, which is one of the largest Romanesque vaults in central Germany and houses sacral works of art.

The only way to access the attic and the treasury is as part of a public guided tour, but do keep in mind that the tour will be in German.

Then, for our afternoon activity, we drove to Burgenlandschmiede for a forging workshop.

Sam has been super interested in this ever since he discovered the show Forged in Fire, so he jumped at the opportunity to spend an afternoon learning from a forge master. 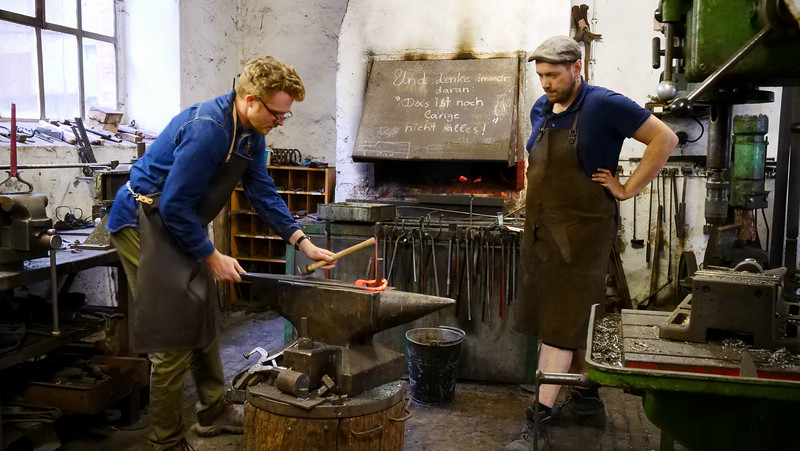 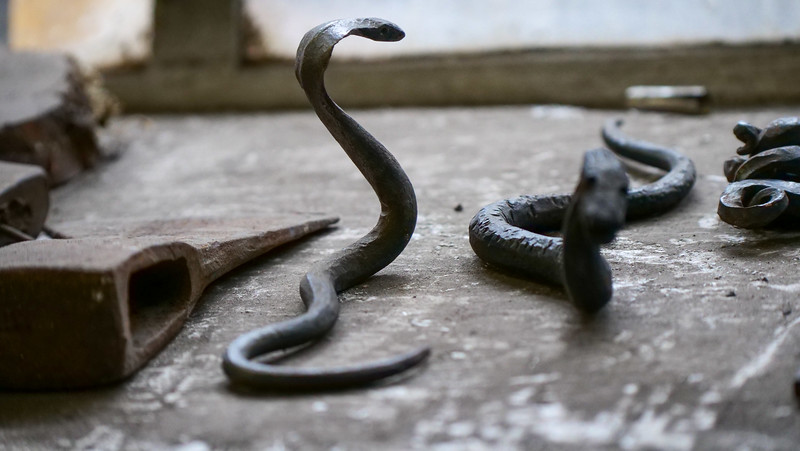 We met Lukas who is part of the Handgemacht Program in Saale-Unstrut, where visitors can meet up with local craftsmen to take part in all sorts of workshops and experiences. You can meet with candy makers, bee keepers, woodworkers, and whiskey producers, so there are all sorts of experiences to be had based on your interests.

Over the course of a few hours, Sam learned how to make a log poker for the fireplace. The end result was a really cool souvenir with a unique travel story behind it.

Stay in a wine hotel

It wouldn’t have been a proper visit to the wine region of Saale-Untrut without spending the night in a wine hotel. Home for the night was the Freylich Zahn Weinhotel in Freyburg.

The cool thing about this wine hotel is that they have their very own on-site wine bar, which is available 24 hours. The way it works is that you can load money on to a card, which you then scan at the wine bar in order to pour whichever wine you feel like sampling. They had everything from whites to rosés to reds, so it was a lot of fun having access to it.

The hotel also has its own on-site restaurant called 51° Restaurant & Weinbar since this wine region sits along the 51° parallel. It’s a really cool restaurant in a cozy cavernous setting with dim lighting.

I had a delicious gnocchi with pumpkin, rucola and parmesan that was paired with a white wine. Meanwhile, Sam had the steak with roasted potatoes paired with a red wine, which I can confirm was exquisite.

And that was our visit to the wine region of Saale-Unstrut. We hope you enjoyed following along!

This trip was made possible in partnership with the German National Tourist Office and Saale-Unstrut Tourismus.