The first thing that Sam and I did when we arrived in Warsaw was eat pierogi at a local pub. This is the one Polish dish we had been fantasizing about ever since we decided to travel to Poland, and it was a nice little introduction to Polish cuisine.

Coming from Canada, we’re used to buying pierogi at the supermarket (that was my go to dish during the winter months when I was back in university!), however, I have to say they pale in comparison to what you’ll find here in Poland.

For starters, there is so much variety! I’m used to the cheese-filled pierogi, but the menus in Warsaw offered a myriad of possibilities including beef and onions, potato and cheese, mushrooms, sauerkraut, and even sweet pierogi stuffed with blueberries and strawberries for dessert.

The savoury ones were served with chunks of fried bacon and sour cream, and the sweet ones, well, they too were served with sour cream. Some were boiled, while others were boiled and then pan-fried. And now let me tell you about the sizes; the first time that I sat down at a restaurant and only received 5 pierogi on my plate I thought, “Hmm, well this isn’t going to be enough food,” but I honestly struggled to finish everything on my plate. That’s how plump and filling they are! 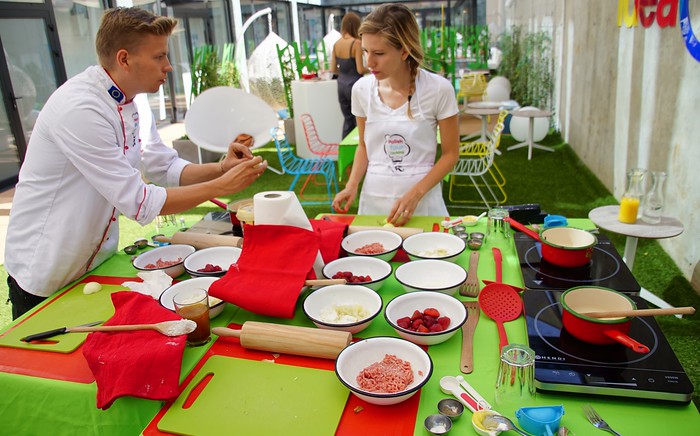 With such a big love for pierogi, you can imagine how excited I was to take a cooking class where I would learn the art of making these tasty dumplings. On the morning of our class, we met Michal from Polish Your Cooking, a young chef who has studied the culinary arts around the world and who also is an avid traveller! Not only was he a great teacher while Sam and I clumsily maneuvered our way around the kitchen, but it was also really fun being able to swap travel stories and compare our travel experiences in places like Chiang Mai and Luang Prabang.

Our first order of business was to eat, because no chef should enter the kitchen hungry. Michal and his team had laid out a spread of breads, meats, cheeses, vegetables, and pickled herring, so we happily ate a second breakfast. (I’m a bit of a Hobbit that way.)

Once we’d had our fill, it was time to start cooking, so we made our way over to the kitchen. We first worked on the dough for the dumplings, and once that was ready we set that aside and got to work on the fillings.

We had 3 different fillings during our lesson: two savoury ones, and a sweet one. For the savoury fillings, we prepared one batch with ground beef and onions, and a second batch with cheese and potatoes. We also learned how to carefully close the pierogi so that the filling wouldn’t leak once they are boiled.

In many ways making pierogi reminded me of all the long Saturdays I’ve spent in the kitchen folding empanadas whenever I’m home, and apparently that’s how it’s also done in Poland. Michal was telling us that it’s a bit of a family tradition to spend your weekend making the dough and then folding 200 pierogi to last you a while. It’s funny how some family traditions are the same around the globe. 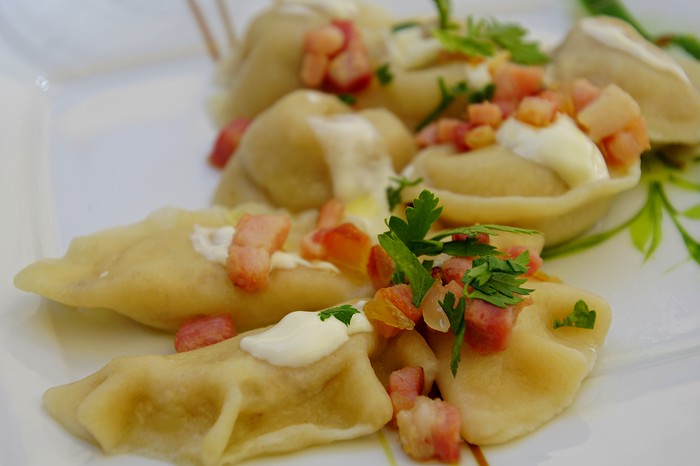 After folding the savoury pierogi, it was time to get started on dessert. For this we chopped up strawberries, though in theory you could use just about any fruit that’s in season. Once we had placed the fruit in the middle of the dumplings, we sprinkled them with a pinch of brown sugar and vanilla infused white sugar. We also added a bit of cinnamon once they were cooked, and they were delicious!

And then it was time for the best part – EATING! The funny thing is that even though it took us almost 3 hours to prepare all the food, we devoured it in a matter of minutes. I guess all that hard work helped build our appetite!

We took this cooking class with Michal who runs Polish Your Cooking. The class lasts around 3.5 – 4 hours and it costs 48 Euros per person or 199 Polish Zloty. This includes: a welcome buffet with starters, the cooking lesson, a delicious lunch where we sampled our own creations, a spread of traditional desserts, our own aprons and cooking spoons to take back home, and a certificate that stated we completed the “Pierogi Grandma Style Course” which means we can cook at “pretty much the world-championship level”. I’m glad he was so confident in our abilities!

Have you ever tried making pierogi from scratch?