We were sure on a roll with side trips during our visit to Gdansk. Aside from taking a day trip to Sopot and Gdynia, we also planned a day trip to Malbork to visit the biggest castle in the world. Because when it’s just a short train ride away, why wouldn’t you visit! 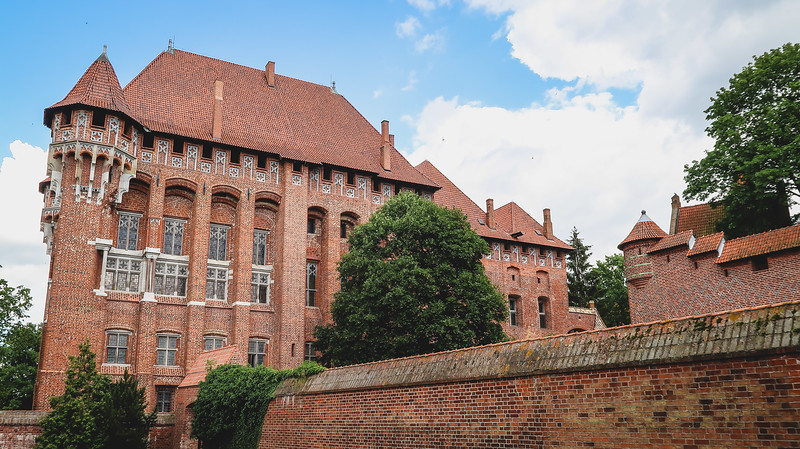 So how big is the biggest castle in the world?

It turns out measuring a castle’s size isn’t a very straightforward task.

Are you looking at just one building or an entire complex? Do you take into account the land within the walls of the castle, or does that not count? What about later additions and expansions that veer from the original plan? And do fortresses count as castles? So many questions!

For classification purposes, Malbork Castle is the largest castle in the world measured by land area, and it occupies a whopping 143,591 square meters, and let me tell you, that means you’re going to be walking a lot! 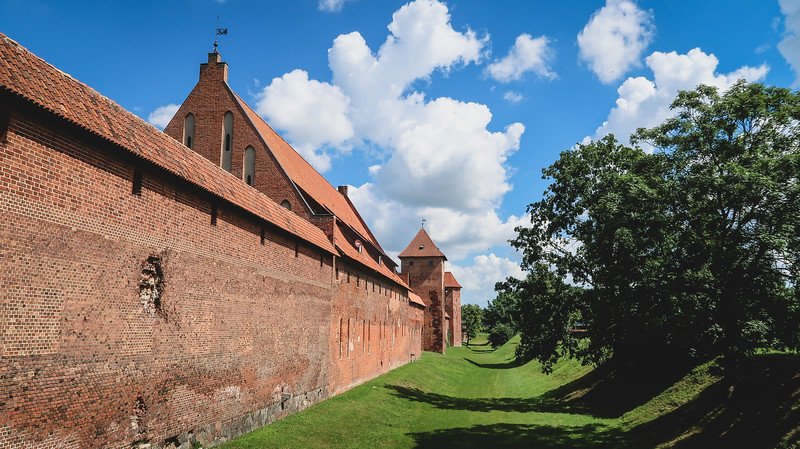 A Medieval-inspired lunch at Malbork Castle

But first, let’s talk about food, because being the foodies that we are, we were hungry halfway through the morning (I’m talking as soon as we reached the castle) and we couldn’t imagine sightseeing around the biggest castle in the world without a little bite to eat.

Well, it wasn’t long before we sniffed out an outdoor restaurant by the name of Karczma Rycerska, which had a bit of a medieval theme going on. Bonus points!

They had a big cauldron of Hunter’s Stew cooking (this is also known as bigos and it’s a typical Polish dish made with cabbage and different types of meat) so our curiosity was piqued. Once we wandered a little closer, the tantalizing aromas lured us in further, and before we knew it we were sitting at a table with two platefuls of food in front of us.

I ordered the Hunter’s Stew with Roasted Potatoes and Kielbasa, and it was a meal fit for a king! I already love Sauerkraut so I thought the stew tasted delicious, the potatoes were golden and perfectly seasoned, and the sausage was crispy on the outside but juicy on the inside.

With appetites satiated, we could now focus on exploring the castle.

To give you a bit of background, Malbork Castle was originally built as a fortress by the Teutonic Knights, a German Roman Catholic religious order of crusaders. Also, when it was completed in 1406, it was the world’s largest brick castle, so this place has been setting records for centuries.

The purpose of the fortress was to strengthen the Teutonic Knights’ control in the area, plus the castle’s favourable position on the banks of the River Nogat, gave them easy access to both the Vistula and the Baltic Sea. That’s right, the Teutonic Knights collected river tolls from passing ships to fund their ventures!

We paid our admission ticket with an audio guide (the cheapest option), which came to 39.50 PLN ($11 USD) and we set out to explore the castle. Once we walked through the main gates and into the central courtyard, we discovered that there’s quite a bit to see and do here.

You have museums showcasing the castle’s collection of amber, furniture, paintings, ceramics and religious artwork, but aside from that, there are also little souvenir shops, restaurants, and performances in full medieval costume.

We spent some time wandering through the various rooms and halls that make up the museum, but as the day went on, the place almost got a little too crowded with visitors and we needed a break. 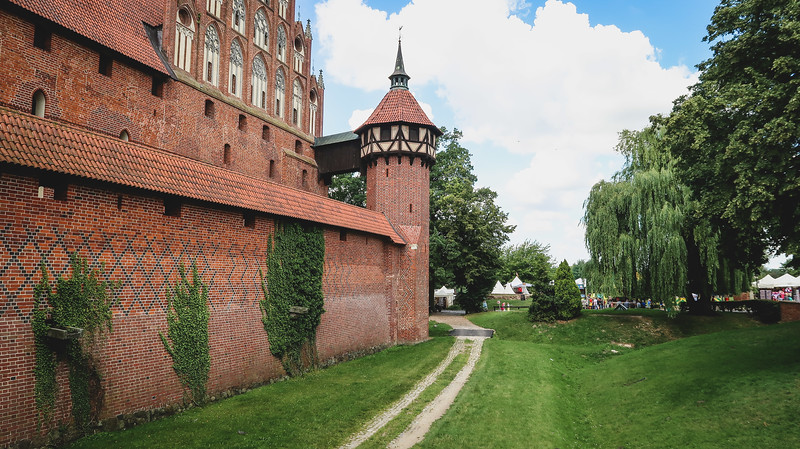 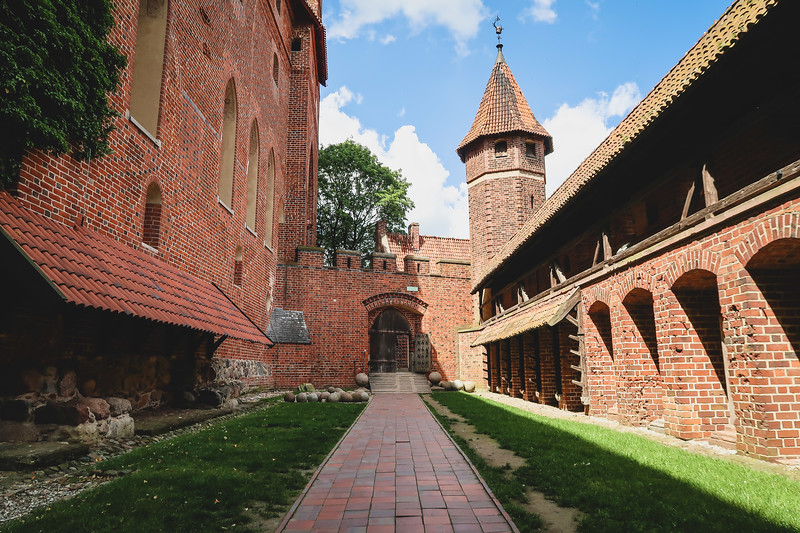 This is where we discovered the rose garden down one of the little paths and it basically felt like our very own secret garden. We plopped into the free lounge chairs for a bit of sunshine…but not for too long because I am married to a freckly redhead. 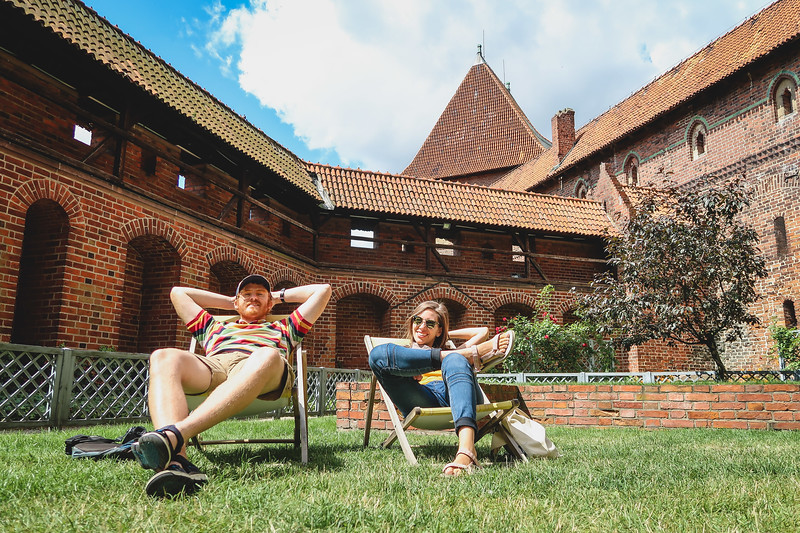 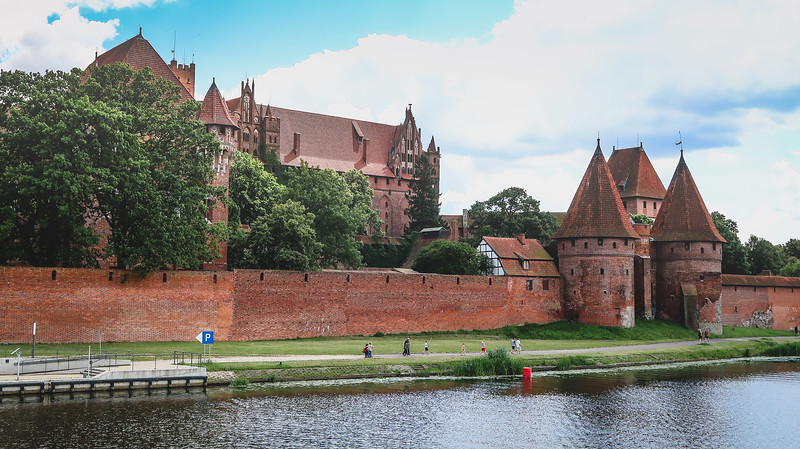 After a bit more wandering around the castle grounds, we reached the backside of the castle, which looks over the Nogat River. As a tip, this is a really nice spot if you’re looking to photograph the whole castle (though the light is better in the morning), and this view also helps put into perspective just how big Malbork Castle really is.

We also noticed there were river cruises on offer right along the banks, as well as a few cute little outdoor cafes just on the other side of the river, so there’s plenty to do once you’re done visiting the castle.

That being said, we were wiped from a long day of walking around, so we decided to call it a day soon after. We retraced our steps back through the town, stopped for a bite of cake and ice cream, and then hopped on the train back to Gdansk.

Now I leave you with a little vlog from our day trip to Malbork:

How to get to Malbork Castle

At that price, it’s really worth taking the slower one if you ask me!

Both trains depart from Gdańsk Główny Railway Station and once you arrive in Malbork, it’s about a 15-20 minute walk to the castle.

You can read about the rest of our travels in Poland here.

Do you enjoy visiting castles?
What’s the most impressive castle you’ve ever visited?