Milan surprised me in so many ways. I think this is one of those cities that is often a little misunderstood and people dismiss it as boring (several friends had told me to skip it), and yet I ended up having a wonderful time there.

I personally believe that the secret to a good time in Milan lies in its experiences rather than ticking off tourist attractions. While the city has a few cool sights to boast, the fun really begins when you start to sample unique Milanese dishes, go out for a late night along the canals, and try to seek out some cool street art.

Here are some of my personal highlights of my 48 hours in Milan: 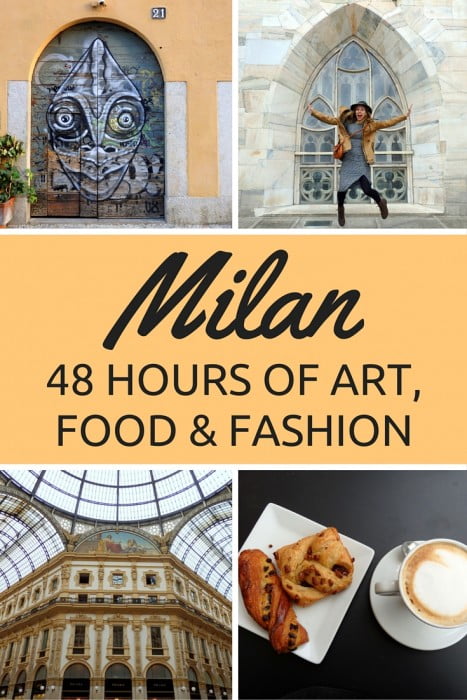 Milan’s Navigli District is the place to be and be seen. It doesn’t matter if it’s the weekend or the middle of the week, when the sun goes down, the little cafes and restaurants along the canal suddenly come to life. Whether you want a quick aperitivo or you’re looking for one of those never ending meals with antipasto, primo, secondo, contorno, and whatever else comes next, you’ll find it here.

If you’re not in the mood for food but you still want to check out the canals, you can also opt for a canal cruise. These last about an hour and you get to see a mix of churches and street art as you drift down the waters.

Going in search of street art

Milan has a lot of really cool street art happening and you’ll often stumble upon it when you’re not even looking. Since street art is always changing I don’t want to give exact addresses lest you trek all the way out there and find that a piece has been completely painted over, but that being said some neighbourhoods to check out are Leoncavallo, Isola, and Porta Ticinese.

My favourite piece of street art in Milan was this lizard/alien face which I spotted really close to Basilica of Sant’Eustorgio. I don’t know who the artist is, but I know I’ve seen that same face in another European city – I just can’t remember where at the moment!

Finding ruins in the middle of the city

On our first morning in Milan, Sam and I decided to skip the tram and walk into the city centre to familiarize ourselves with the area. We were walking up Corso di Porta Ticinese when we came across Colonne di San Lorenzo, which are the remains of Roman ruins that date back to the 2nd century. There are 16 columns that line the piazza in front of Basilica di San Lorenzo, and they are believed to have been part of a bath house before they were moved to their current location at some point during the 4th century.

Visiting a castle with treasure to boast

Another place I really enjoyed visiting was Castello Sforzesco – did you know that Milan has a castle?! It was built in the 15th century on top of fortifications that date back to the 14th century, and then it saw several waves of construction and expansion in the centuries that followed.

The complex is quite large and you can visit the castle defences, wander the courtyards, and try to lure the stray cats that hang around in the empty moat. The castle is home to numerous museums, but the two works that most people want a glimpse of are Michelangelo’s last sculpture Rondanini Pietà and the castle frescoes painted by Leonardo Da Vinci.

Discovering the art of the aperitivo

Oh, the aperitivo! This is something that both fascinates and baffles me.

So, Italian meals are known for being notoriously long and they often involve several courses, but the aperitivo is just the beginning. The aperitivo is essentially a pre-dinner drink that is meant to open the palate and prepare you for what’s to come, while offering a very relaxed mood where you can catch up on the day’s events with friends.

The way it works is that you order a cocktail, generally somewhere around 10 Euros, and this also gives you access to an open buffet of what Italians consider ‘snacks’. When I heard snacks I was expecting some olives, prosciutto, and peanuts, but no, they go all out here! I’m talking about pizza, ravioli, salads, lasagna, chicken, and that’s just the savoury buffet. There was also a dessert buffet…

If you want to check out the place where Sam and I had our aperitivo, go to Manhattan along the Navigli canal. It’s a really popular spot, and the variety of foods was truly impressive. By the time I walked out of there I felt like I’d had my fill of dinner, so keep that in mind if you’re thinking of grabbing food afterwards. 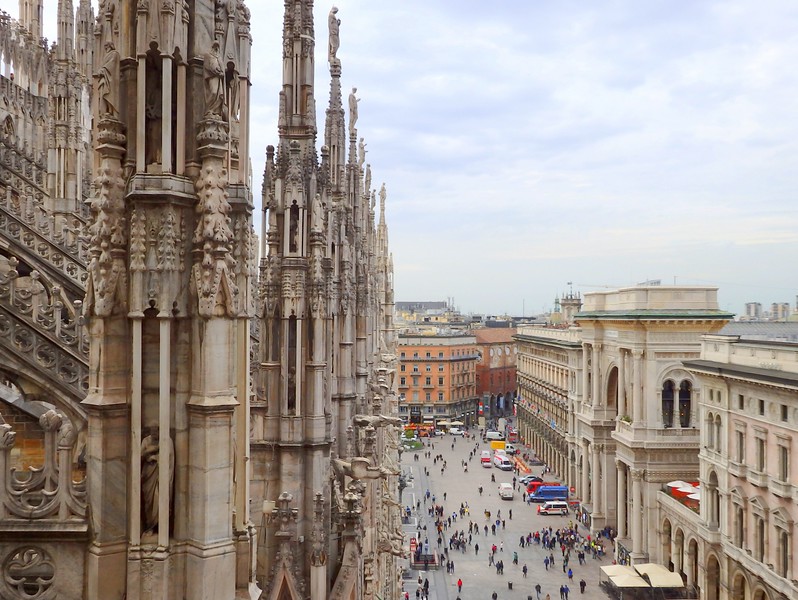 Enjoying the views from the terraces of Il Duomo

If there’s one thing I was really excited about doing in Milan, it was climbing to the top of Il Duomo for a view of the city below. How many churches out there actually have a rooftop terrace?!

To give you a bit of background, the Duomo is a Gothic cathedral that took nearly six centuries to complete and it is listed as the 5th-largest church in the world. The exterior is covered in Candoglia marble, which gives it its off-white pinkish colour, and it’s probably the most recognized landmark in the whole city.

Once you get up to the rooftop you are surrounded by the most intricate spires and you also get some pretty cool views of the main square below where people look to be the size of ants. Needless to say, there are long lines, but the wait is worth it once you reach the top. Either that or go early!

Starting the mornings with a sweet breakfast

Since Sam and I had recently finished travelling around the UK and Ireland, we had gotten used to the savoury full breakfasts that come complete with eggs, sausages, beans, tomatoes, mushroom, and whatever else they add depending on the region. That’s why it was such a pleasant surprise to discover that Italians have a sweet tooth when it comes to breakfast.

Our breakfasts in Milan generally consisted of a frothy cappuccino from a local coffee shop as well as a sweet pastry on the side. My favourite was a twisty puff pastry with melted chocolate chips on the inside – I couldn’t tell you the name, but it was oh-so-good! 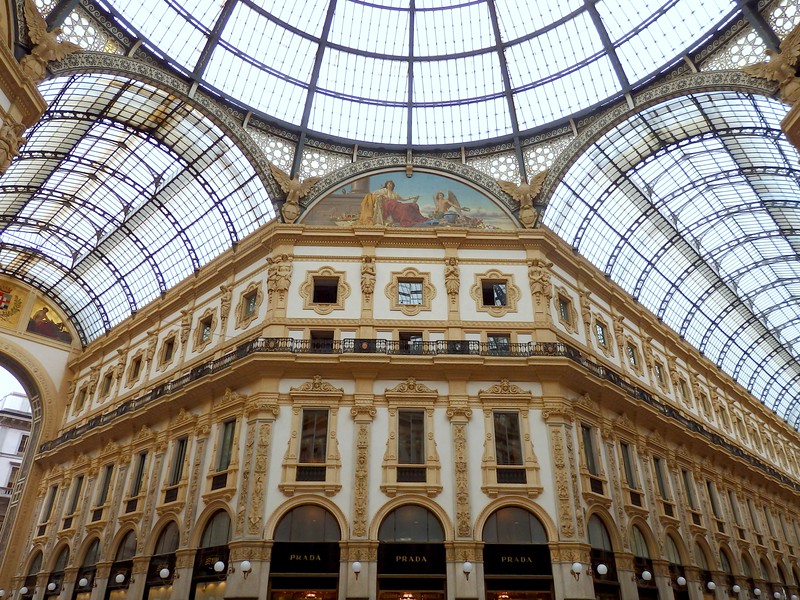 When it comes to shopping, Galleria Vittorio Emanuele II is one of the most high-end destinations. This is where you find names like Prada, Versace, Louis Vuitton, Gucci, Armani, and others. These aren’t stores where I’d ever shop (not only because I can’t afford it, but because there are better things to spend your money on than a $10,000 handbag!), nevertheless, this is a place you visit for its architecture.

The Galleria is a pretty special place because it is a four story arcade with a roof that combines glass and cast iron. It also happens to be one of the oldest shopping malls in the world, and whether you’re looking down at the mosaic floors or up at the arched ceiling, it’s bound to wow you.

Every city or region is usually known for at least one specific dish and in Milan that dish is Risotto alla Milanese. Seeing as Sam and I are major foodies and we like to film videos highlighting the local cuisine wherever we travel, we had to try this dish.

Risotto is made with a starchy rice that has the ability to absorb a lot of liquids. It generally has a creamy consistency thanks to a generous use of butter and cheese, and it can be prepared many different ways – with mushrooms, seafood, mixed vegetables, you name it!

The Milanese recipe calls for saffron alone, and that means you end up with a relatively simple yet very flavourful recipe. Sam and I polished off everything on our plates and were left beyond stuffed.

Fun fact: in Italy risotto is served as a primo (first course), which means technically you could order a few more dishes after that…whether your stomach can handle it or not, is up to you to decide.

And that’s a wrap of our quick visit to Milan! Next up, lots of posts from Chiavenna and Bergamo, which are two very easy day trips from the city.

How would you spend 48 hours in Milan?