During my third year of university, I signed up for a course titled Islamic Art and Architecture for one of my electives. I was travelling in Argentina at the time my enrolment window opened, and I remember sitting in a hostel in Cordoba battling a slow internet connection while I tried to figure out what classes still had seats remaining.

There were a few different courses I was considering and not being the most assertive decision-maker, I turned to my friend Rebecca and asked her which one she thought I should go for. Being the art major and talented visual artist that she is, she suggested the art course.

That course ended up being one of my favourites of the year. It sparked my slight obsession with Central Asia (Uzbekistan is still a dream destination of mine!) and it also taught me to decipher the subtle meaning behind buildings which is often hidden in plain sight.

One period that we covered extensively in that course was that of the Mughals, an empire that ruled the Indian subcontinent from the early 16th century to the early 18th century and left a wealth of structures scattered across the land. Coming to Delhi, India those exquisite structures that I had once marvelled at on the pages of my textbook finally came to life.

My first stop in Delhi was the Red Fort. We purposely booked a hotel within walking distance and on our first morning there Sam, his parents and I were out the door and on our way soon after sun-up.

The Red Fort was the main residence of the Mughals for almost 200 years and though it may be called a fort, this place is more like a walled city. After the Mughals moved their capital from Agra to Delhi, this became their primary residence and inside you can find a bazar, a mosque, various courts and pavilions, as well as imposing red sandstone gates that will make you feel tiny.

The whole place is beautiful, but the one structure that took my breath away was the Lahori Gate, named so because it faces towards Lahore, Pakistan. The gate is a giant mass of red sandstone, and the arch carries your eyes all the way up until you reach a roof pavilion, which I sadly couldn’t fit into one picture. Imagine setting foot through those gates several centuries back and finding yourself in the heart of a bustling bazaar! 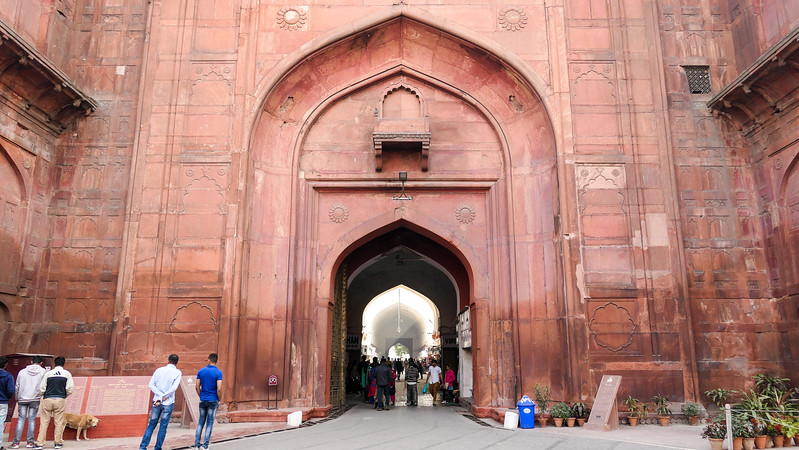 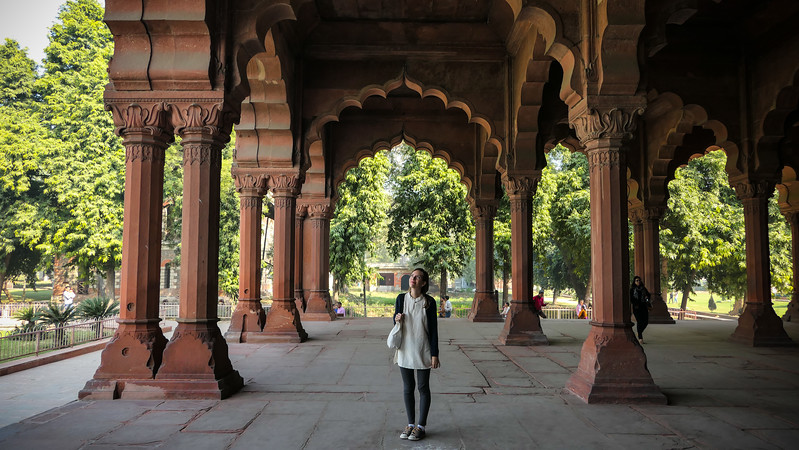 Our second day in Delhi was reserved for the place I had been most looking forward to Humayun’s Tomb – a name that had been uttered in class at least a thousand times.

The tomb was commissioned by Humayun’s first wife, Empress Bega Begum, who deeply mourned his passing and consequently dedicated her life to building the most beautiful mausoleum to keep his memory alive. I think she did a pretty good job because, for me, this was the most beautiful building I saw in Delhi. When the sunlight hits the red sandstone it just glows, and then once you get up close and see all the intricate details on the facade, you can appreciate its beauty all over again.

Humayun’s Tomb was the first garden-tomb of its kind in India and it also provided the inspiration for the Taj Mahal which would be built many decades later, so if you’re heading to Agra this is a nice little sneak peek at what’s to come! 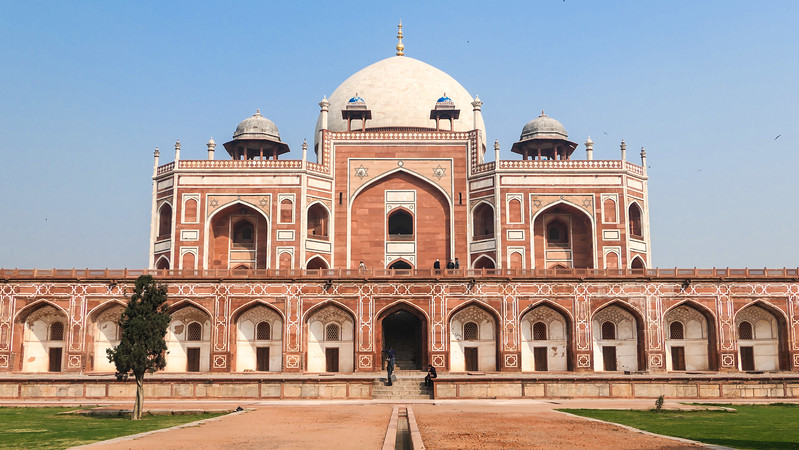 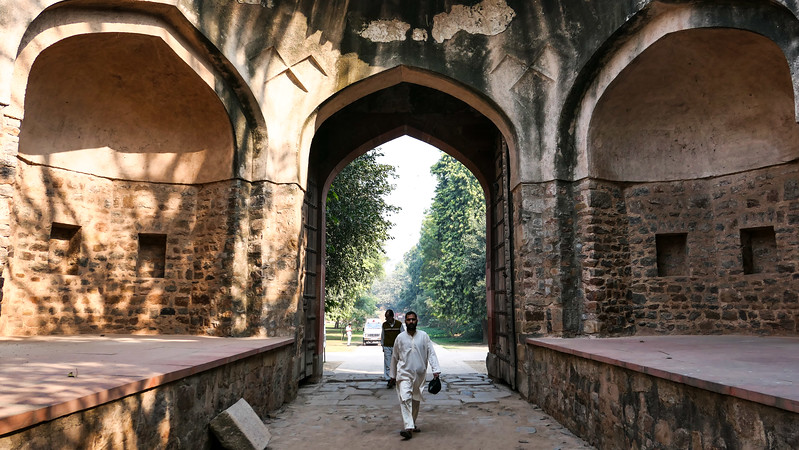 Lastly, on our third and final morning in Delhi, we went to Jama Masjid which is the largest mosque in India. We had attempted a visit the previous day, but we arrived just as they were closing for noon prayers, so we only got a quick glimpse of the exterior. Not this time!

After leaving our shoes at the door, we climbed the southern minaret for views of Old Delhi. While I’m not sure I would repeat the experience (it is a very narrow staircase with people competing to go up and down, plus once you reach the top there’s only a tiny platform to stand on – hello vertigo!), I did enjoy wandering the rest of the grounds.

Inside the prayer hall you’ll find white marble floors with black inlays that outline individual places for each prayer mat, the walls are decorated with sweeping arabesques, and you have an enormous crystal chandelier in the centre of the hall. 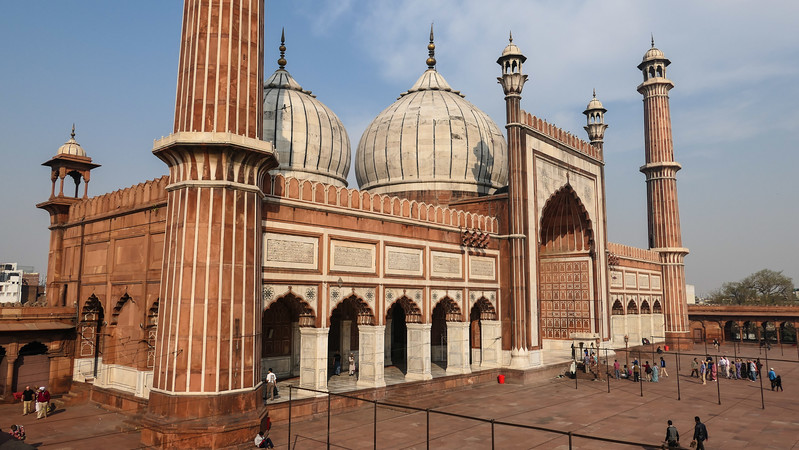 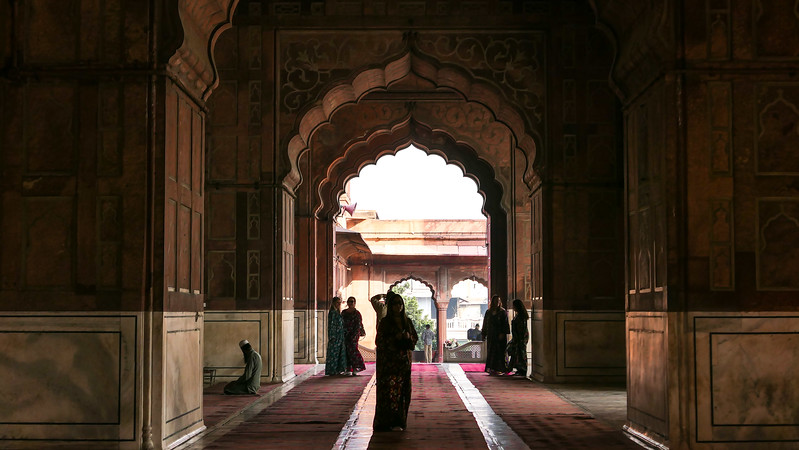 That was my grand introduction to Delhi: three days, three Mughal structures, and enough sandstone to leave me seeing red in the city.

As I write this I’m sitting in a homestay in Agra where the rooms are full of books and artefacts from around the world and you wouldn’t believe what I spotted. On a wooden coffee table with carved elephant figures lay the very same 600+ page title, Islam: Art and Architecture, which first introduced me to these buildings. I had to pick it up, flip through the pages, and laugh at the serendipity of it all.

Have you checked out the Mughal architecture in Delhi?