Kimito Island is nothing short of idyllic. As Finland’s largest coastal island, Kimito is a quiet retreat where you can enjoy the simple pleasures of nature – walks through the woods, blueberry picking, or a bit of island-hopping by kayak.

I feel very fortunate to have been able to visit this island twice in the past two years, and in today’s post I wanted to highlight some of the activities you can expect to experience around the island. 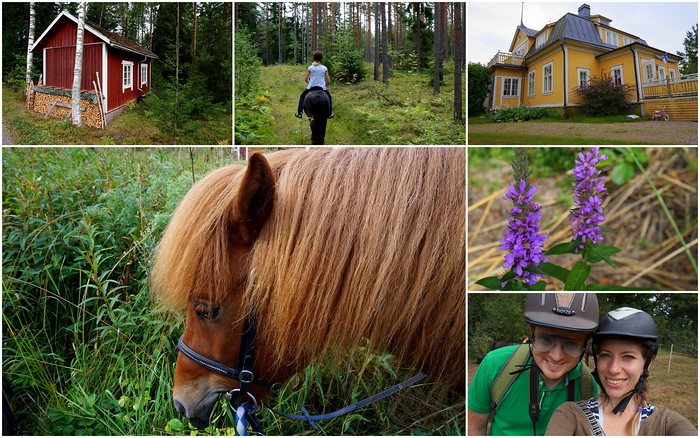 Ride Icelandic Horses through the forest

So here I was in Finland, riding Icelandic horses, with a Swedish-speaking guide. Could it be any more international than this? During one of our mornings on Kimito Island, we met up with Johanna who runs a horse riding school called Gropa Stall. I’ve never been to Iceland, let alone ridden Icelandic horses, so I was pretty excited for the day ahead.

While chatting with Johanna I learned that Icelandic horses are different from other breeds; even though Icelandic horses may be smaller in stature, they are still quite strong and they also have very gentle characters. Once I had been introduced to my horse Farri and we were all saddled up, Johanna took us on a nice riding loop that went past pastures and through the forest before finally arriving at the beach.

It was a very pleasant ride, but what I’ll remember even more than the outing is the hospitality that Johanna and her family showed us. After our outing, Johanna ended up inviting us to her parents’ home in the woods where we ate a delicious meal prepared by her mom. They had just finished smoking salmon (delicious!), but even better than that was the chance to chat to an incredibly welcoming family and hear about their way of life. It was the perfect afternoon!

Go sea kayaking in the archipelago

The archipelago region is home to tens of thousands of islands and a great way to experience these is by going sea kayaking. I had already been kayaking in Kimito Island when I visited last year, but going out a second time turned out to be a lot fun since we got to explore a completely different set of islands.

We headed out in the late afternoon and got to watch a spectacular sunset out on the water. Also, because Finland experienced an abnormal heatwave this summer, the waters were warmer than usual and our group had plenty of fun splashing around.

So far all my kayaking trips have been brief outings ranging from 2-4 hours, however, if you’re an avid kayaker, Aavameri Archipelago Sea Kayaking runs week-long excursions that take you as far out as the Åland Islands – that’s heading towards Sweden!

The Bengtskär Lighthouse is a pretty unique attraction because it’s located 52 kilometers out at sea. The lighthouse was built in 1906 on a rocky outcrop and it is one of the tallest in all of the Nordic countries.

Paula and Per Wilson have the distinguished title of being the lighthouse’s keepers, and the only time they leave this peaceful abode is during the winter months when the waters freeze over preventing supplies from reaching the island.

If you ask me, the coolest thing about the Bengtskär Lighthouse is that you can actually stay there as a guest! I didn’t have the chance to do so, but the lighthouse does have a select number of rooms where visitors can come and spend a few nights. Can you imagine falling asleep to the sound of crashing waves in a lighthouse out at sea?!

They also have a small chapel for couples looking to tie the knot is a small, intimate setting. Seriously, this video might just convince you to visit. 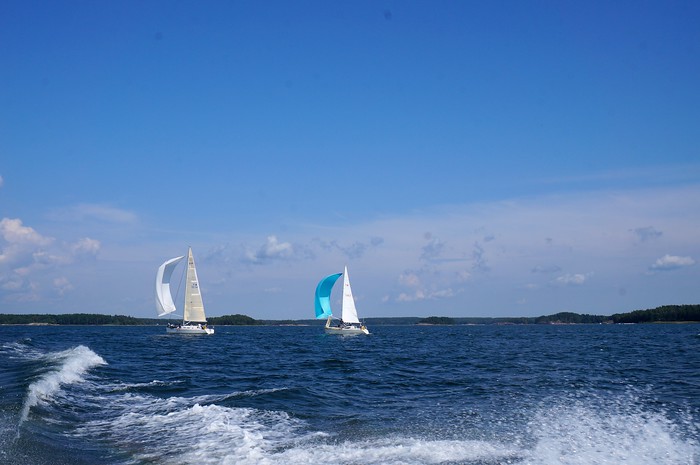 Go boating on the Baltic Sea

We were lucky enough to be in Kimito just as the summer holidays were coming to an end, meaning everyone was out enjoying one last hurrah on their sailboats. I don’t think we could have asked for better weather – we had blue skies for the duration of our visit.

Learn about the archipelago’s military past in Bolax

Last year we met Amy, a fellow Torontonian now living in Finland, and when we visited this summer we got to reconnect and spend a day exploring the archipelago region together. She took us out to Bolax which is an island that has been inhabited since the 1600s. The centerpiece of the island is a massive cannon that was used in many battles fought against the Russians. Since the island-keeper happened to be around for the summer we got to hear a bit about the region’s military history and we also got to climb inside the artillery dome – I can’t say I’ve ever done that before.

One of the most popular attractions in this region is the Rosala Viking Centre. While this outdoor museum is technically geared towards families with children, it’s still a lot of fun for those young at heart. Want to dress up like a Viking, wield a sword, or test your balance stilt-walking? Then Rosala is just the place.

My favourite thing about Rosala, however, turned out to be the food. (Surprise, surprise!) If you’re visiting for the day you can enjoy a Viking feast in the dimly-lit dining hall. Between the bear skin glaring down at you from the wall, and the soup being scooped out of a cauldron, it feels quite authentic.

Sweat it out in the sauna

We can’t speak of Finland without mentioning sauna. This country is said to have an estimated 5 million saunas for a population of 3.2 million people – now that’s a passion. I used to detest saunas when I was younger because I felt like I couldn’t breathe in them, but after a few sauna sessions in Finland, it is starting to grow in me. I still can’t last more than 10 minutes without having to run out for air and a cold shower, but I have a feeling I could get used to it during the long winter months. 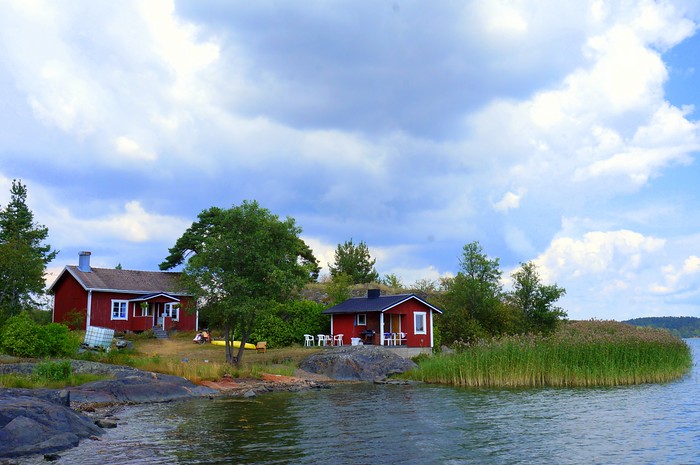 Where to stay on Kimito Island?

Kasnäs Archipelago Spa – The Kasnäs Archipelago Spa is a beautiful property located right by the sea. Many people come here to enjoy the spa, which includes saunas, hot tubs, warm swimming pools, and even icy pools. A double room for 2 will run you 90 Euros during the low season and 130 Euros during the high season. These rates include breakfast and access to the spa.

Marielund Cottages – Remember Amy, the fellow Canadian I mentioned earlier? Well, it just so happens that she and her family rent out beautiful cottages.  Their cottages are surrounded by forest and they are less than 100 meters from the Baltic Sea, so if you’re looking for a quiet little hideaway, this is a great spot to consider.

Camping – Experiencing Kimito Island and the archipelago region doesn’t have to be expensive. Camping can be a great option for travellers looking to explore this region on a budget. There are various camp sites and caravan grounds where you can camp out for a few days while still having the comfort of washrooms and a hot shower nearby. Alternatively, you can enjoy every man’s right, which means you can temporarily camp out anywhere in the country, so long as you remain within reasonable distance of people’s homes and cottages.

Getting to Kimito Island

By bus: Buses run daily from Helsinki to Kimito. To have a look at the timetable you’ll want to visit Matkahuolto.com and enter the destinations as follows: from ‘Helsinki’, to ‘Kemiö’ – the website won’t recognize ‘Kimito’ if you type that in, so be sure you type in Kemiö. The search will then yield a full list of departure times. Most journeys involve catching a connection in either Turku or Salo and it takes an average of 2 hours and 45 minutes to get there.

By car: The best way to get around Kimito Island is by car. Driving time from Helsinki is around 2 hours, and the best part about renting a car is that you’ll have the flexibility to move around the island and explore the little villages. There is bus service on Kimito Island but it can be a bit infrequent, so a car is really convenient.

By boat: To visit some of the smaller islands on the archipelago, you’ll need a boat. The larger islands are connected via bridges and ferries, however, you can get to the smaller islets by renting a small motor boat.

And that’s a little taste of the archipelago region!

For more information on planning a trip to Kimito Island, you can go to Visit Kimitoon and Visit Finland.