We came to Agra for the same reason everyone else does: to see the Taj Mahal – the one attraction that sits at the top of every visitor’s Agra travel itinerary. This symbol of undying love is one of the seven Wonders of the Modern World and one of the most beautiful buildings in India, so like countless travellers before us, we too made the long journey to see it with our own eyes. (Spoiler alert: it lived up to every single expectation and then some!)

Since our month in India was all about travelling at a slow and leisurely pace, we gave ourselves three full days in Agra (we later learned that most people only stay a night or two!), and fortunately for us, that meant we got to see and do quite a bit around the city. Now here’s a look at how we spent our 3 days in Agra: 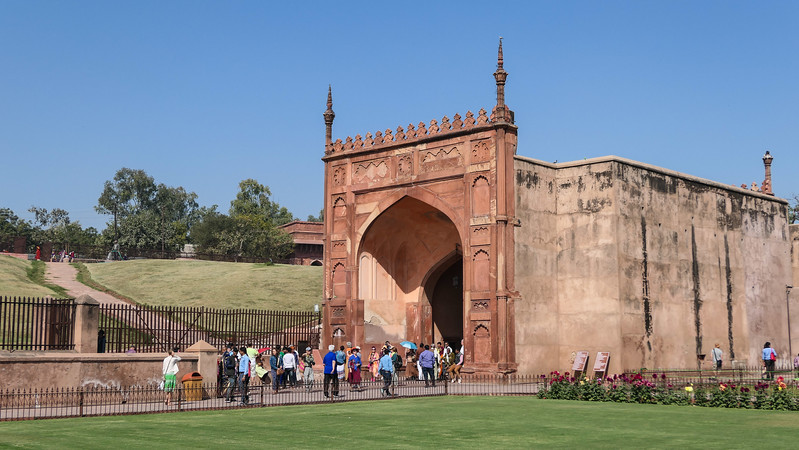 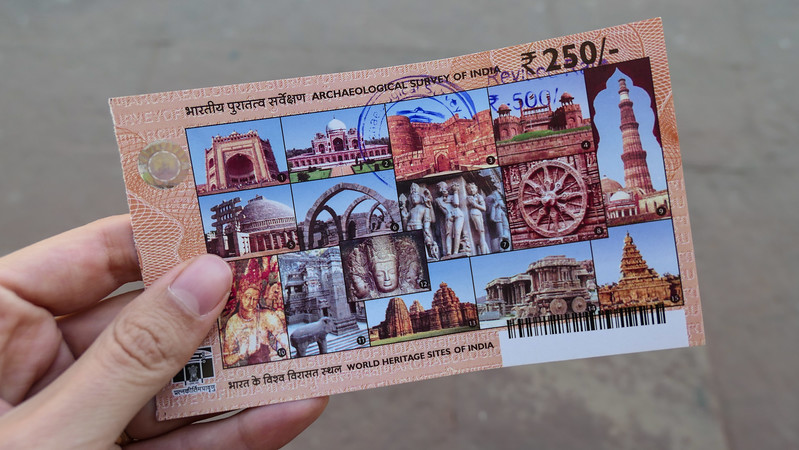 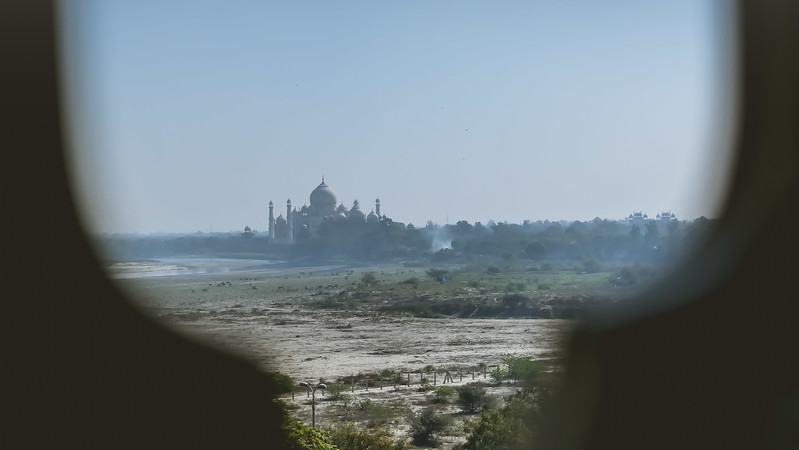 Agra Fort was the main residence of the Mughal emperors before they moved their capital to the Red Fort in Delhi, so if you’ve already been there on your travels through India, it’s kind of cool to see some of the similarities between the two structures.

Like the Red Fort in Delhi, Agra Fort is also a walled city and inside the enclosure you’ll find gardens, palaces, mosques, audience halls, and basically a maze of marble and red sandstone. If you’re interested in the history of the fort, you can easily hire a guide at the gates, however, it’s also the kind of place that you can enjoy on your own.

The cherry on top is that because Agra Fort is located just 2.5 kilometres from the Taj, you get some pretty cool views of it as well! 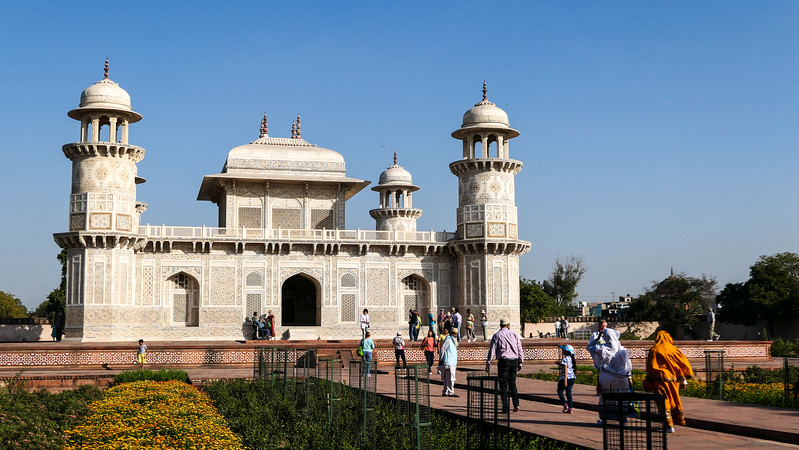 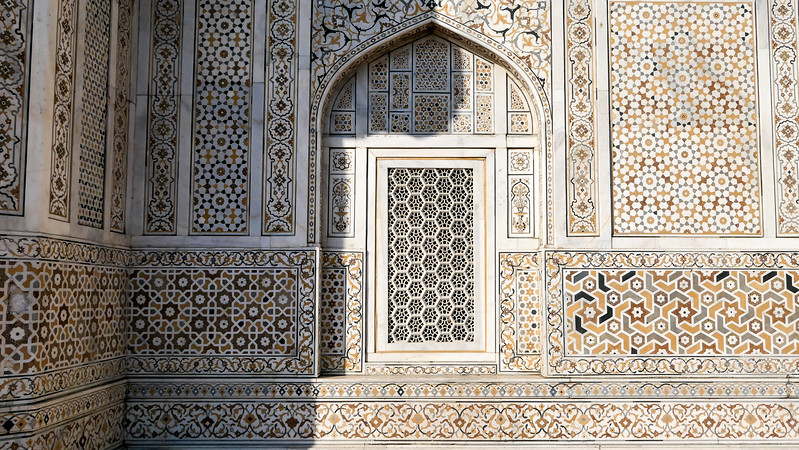 Admire the Baby Taj up close

Alright, so you’re not going to get any views of the Taj Mahal from the baby Taj, but if you’re already heading to Mehtab Bagh, this stop is right along the way.

The Baby Taj, whose real name is the Tomb of I’timād-ud-Daulah, is a mausoleum that was commissioned for Mirzā Ghiyās Beg; he was the grandfather of Mumtaz Mahal, the woman the Taj was built for.

The Baby Taj has been regarded as an early draft for the Taj, but I personally don’t see the resemblance – I think Humayun’s Tomb in Delhi offers a better representation of that! But what I can agree with is that the Baby Taj looks a bit like a jewelry box. From a distance the building may appear to be solid white marble, however, when you get up close you can see that it is covered in arabesques, geometric patterns, and colourful semi-precious stones!

Another place you should make time for in Agra is Mehtab Bagh, which also goes by the ever romantic name: Moonlight Garden.

Aside from offering a quiet respite from Agra’s busy streets, these gardens sit directly behind the Taj Mahal and right across the Yamuna River, which means that once again you get some postcard perfect views.

This location is really popular at sunset, and couples, families, and tour groups were already starting to gather across the lawn long before the sun went down.

Legend has it that Emperor Shah Jahan, who commissioned the Taj Mahal, had wanted to build a mausoleum of black marble for himself in these very gardens to mirror the Taj Mahal. As history would have it, Shah Jahan’s own son ended up throwing him in prison, which meant this plan never came to pass, but can you imagine what that would look like today?

Tip: Because Mehtab Bagh is located so close to the Yamuna River, it can partially flood during the rainy season. Something to keep in mind if you visit during that time of year.

Get close to nature on the Taj Walk

One of the biggest surprises in Agra was the Taj Walk, also known as the Taj Protected Forest, which is located just before reaching the East Gate.

The Taj Walk is a mix of paved paths and dirt trails, where you can spot peacocks roaming wild, however, the crowning jewel of the park are the free views of the Taj Mahal! They have a few benches scattered across the grounds and every once in a while you’ll come across an unexpected hill that offers views of the Taj dazzling in the sunlight.

Because the park is located east of the Taj, you get the best views in the morning when the sunlight hits the building. You can still visit in the afternoon, but the Taj will be backlit – something to keep in mind for all you photogs out there.

Enjoy a meal with a view of the Taj

Saniya Palace Rooftop Restaurant calls itself “the restaurant with the best views of the Taj Mahal”, and while I didn’t try every restaurant in town, I can’t really argue with that statement either because the views were pretty spectacular.

This restaurant is located on top of a guesthouse by the South Gate and you have to huff and puff your way up several flights of stairs, but once you reach the top, you can see the Taj Mahal framed by pastel buildings.

The food did take a long time to arrive (we waited 45 minutes) and it’s not going to win any awards (expect standard Indian fare), but if you’re in no rush, the rooftop is a nice place to linger while you enjoy views of the Taj just a little bit longer. 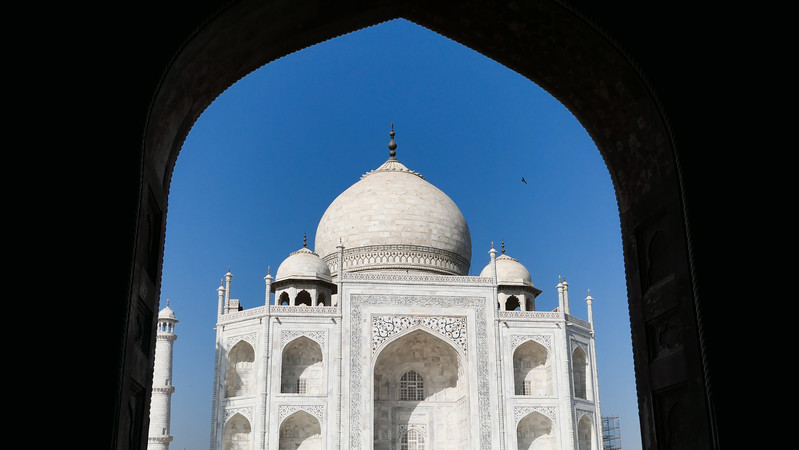 Visit the Taj Mahal itself

And now I’ve saved the best for last: seeing the Taj Mahal up close!

What can I say about the Taj Mahal that hasn’t already been said before? The structure is striking from the minute you first set eyes on it.

We decided to skip the early morning wake-up call for sunrise, and made our way there at 9:00 a.m. without any rush. We were visiting on a weekend, but there were no lines at the East Gate, so we went through security and were standing in front of the Taj within minutes.

We spent the entire morning walking along the complex, gawking at the building’s beauty from every angle, and taking a gazillion pictures because you never know when you’re going to be back! If you’re planning on visiting, I would suggest you give yourself at least 2-3 hours to explore every nook and cranny.

Tip: Once a month on the full moon, the Taj Mahal is open for nighttime viewing, so if your trip happens to coincide with that, it’s a pretty rare opportunity to enjoy! Sadly, we missed the full moon by just a few days.

Stay within walking distance of the Taj

Our hotel in Agra was my favourite property of our whole month in India, so I just have to write about it! We stayed at a place called The Coral Court Homestay, which is a boutique hotel with a familiar touch.

The property was run by a travel-loving couple who had a colourful home filled with trinkets from around the world. I loved that wherever I looked there was an unusual artifact with a story, be it embroidered silk pillows with elephants, tinted glass lamps dangling from the ceilings, or shelves and coffee tables piled with books in foreign languages. It was like setting foot in the home I’d like to have one day.

Aside from being a beautiful property, it was also within walking distance of the Taj Mahal while simultaneously being in a quiet area just off of Taj East Gate Road. If you’re looking for a place to stay in Agra, I would highly recommend this hotel!

Lastly, they served breakfast, lunch and dinner in a communal dining area where guests could mix and mingle, while swapping tales from their travels across India.

To wrap things up, I’m really glad I had three full days in Agra to sightsee without rush and tack on some lesser visited attractions. That being said, if you are on a tighter schedule, you can still pack quite a bit into a day or two, especially if you hire a rickshaw driver to take you around, so either way, you’ll enjoy your visit.

Would you add anything else to this Agra travel itinerary?