When Sam and I were first planning our trip to Japan, one of the things at the top of our list was to book a traditional Japanese ryokan stay. I mean, who wouldn’t want to wear a yukata, feast on a multi-course dinner, sleep on tatami floors, and soak in an onsen?

I got straight to planning and ended up booking a stay at Ryokan Seiryu in Takayama. We chose Takayama because it’s a mountain town in the heart of the Japanese Alps with plenty of temples, shrines, and scenic trails to explore, plus it’s also the gateway to Shirakawa-go, where you can visit the ‘praying hand’ farmhouses.

“So what exactly is a ryokan?” you ask.

Prior to visiting Japan, I thought a ryokan was the same thing as a hotel, but it turns out ryokans are in a category of their own.

A ryokan is a type of traditional Japanese guesthouse or inn, generally located in a scenic area close to nature, making it a great place to relax and unwind.

What sets it apart from your average hotel is that a ryokan is far more than just a place to rest your head at night. Staying in a ryokan is an experience in and of itself, where you are treated to the art of hospitality from the minute that you set foot through the door. It can be a fascinating glimpse into Japanese culture, but we’ll dive into details soon enough!

Checking in at the ryokan

As soon as we arrived at our ryokan, we noticed a shoe rack on the wall and rows of slippers, so this was our first cue to take off our shoes and store them in the cubbies. I discovered that finding slippers that fit me is a bit of a challenge in Japan, so I grabbed some of the biggest men’s slippers available!

We then walked up to the front desk where we were introduced to our nakai-san, who would be our room maid and attendant for the duration of our stay. She gave us a quick overview of the ryokan, explained how the baths work, took us up to our room, gave us our towels and yukatas, and made a note of when we wanted dinner served. She then prepared some green tea and served us Japanese sweets which we proceeded to devour in a matter of seconds.

Time for a bath at the onsen

With a few hours to spare before dinner time, we decided to head down to the public baths, better known as the onsen.

Now, if you followed our travels through Korea, you already know that I was too shy to try the public baths at the jjimjilbang, however, I decided that in Japan it would be now or never. The onsen is a key part of a Japanese ryokan stay and I was going to get the full experience!

I made my way downstairs feeling as confident as one can before getting naked in front of a group of strangers (no bathing suits allowed here!), and then I walked in….and there was no one else there.

I HAD THE WHOLE ONSEN TO MYSELF!

Well, what a relief that was!

Haha, I really do think that worked out well for a newbie like me.

Maybe we just went at an odd hour because Sam also told me that he was the only one in the men’s side, and there were plenty of guests at the ryokan.

So what exactly do you do in the onsen?

Onsen etiquette dictates that you must wash before you enter the bathing area. Inside the onsen, you typically have individual washing stations with a plastic stool to sit on, a detachable showerhead, shampoo, hair conditioner, body wash, and a washing bowl to splash yourself with.

After you’ve washed you can enter the bath, which looks like a small pool or a jacuzzi. Some ryokans have onsen that are fed by natural springs and others heat the water with boilers – this one was the latter.

Directly in front of the pool, there was a big window with a serene garden with pebbles and bamboo. I probably lingered in the onsen for about 15 minutes or so because it was piping hot, but I’m glad I got to try it.

I should mention that staying at Ryokan Seiryu also gives you access to their sister hotel, Alpina, which has a natural onsen fed by a hot spring that wells up from 1,007 meters underground. It’s just a 5-minute walk away and you can go over in your yukata.

Now, for anyone interested in seeing our tour of the ryokan thus far, here’s a video we filmed:

Back in our room after a good soak in the onsen, we decided it was a good time to slip into the yukata. This is a Japanese garment sometimes called a ‘summer kimono’ which can be worn during your stay in a ryokan.

Originally, the yukata was meant to be worn when going in and out of the bath, but these days it’s considered fashionable summer wear. The staff at our ryokan even told us that we could wear our yukata to go sightseeing around the city.

We got beige yukatas with a red design and matching belt and a light blue jacket. They were super comfortable and breezy which is a must if you decided to visit Japan in the summer as we did.

A multi-course dinner at the ryokan

By the time we had dressed up in our yukatas and finished exploring the ryokan, it was already time for dinner and we were in for a treat. This meal was probably my favourite part of our whole ryokan stay!

Ryokans typically specialize in kaiseki, which is a traditional multi-course dinner with impeccable presentation and wonderful hospitality.

Kaiseki meals were once reserved for the royal noble classes and today they are part of Japan’s haute cuisine. It comes with a price tag, but it’s a meal that you’re sure to remember!

Since we did our ryokan stay in Takayama which is home to Hida beef, this was something that featured quite prominently in the dishes. We had Hida beef steamed buns, Hida beef shabu shabu, and even Hida beef steak. These are must-try foods in Takayama!

Of course, we had to document the entire meal so here’s another video to give you the full experience!

Sleeping on a futon on tatami floors

And now let me tell you about the best sleep I had during our whole trip to Japan!

When you stay in a traditional ryokan, you typically sleep on a futon. This is a mattress that’s laid directly on the tatami floors, but it’s much thinner than your average Western mattress, meaning it’s firmer.

I wasn’t sure how my back would feel about sleeping on a futon – would it be too hard? would it feel like I was sleeping directly on the floor? – but it was wonderful!

I fell asleep almost instantly and woke up in the same position. No tossing and turning, no getting tangled in the blankets, just a deep, restful sleep. It was amazing and very different from our stay in Japanese capsule hotel!

For anyone staying in a traditional ryokan for the first time, don’t be alarmed if there’s no futon in your room when you first check-in. The futon only comes out when it’s time to go to sleep; during the day it is folded and neatly stored in the closet along with the duvet and pillow.

The futon will typically be set up for you after you have your dinner. Our table had just been cleared from dinner when two women arrived to set up our beds for the night. What followed was a beautiful work of synchronized art.

Sam and I watched as they got to work unfolding the futon, putting a cover on the duvet, and fluffing the pillowcases, all without uttering a single word. Their movements were so in sync and perfectly timed that we felt like we were watching a performance.

Lastly, if sleeping on a futon doesn’t sound like your thing, but you still want to experience a Japanese ryokan stay, you can find more modern guesthouses with Western beds, so there are options.

Breakfast at the ryokan

Just like the previous night’s dinner, breakfast at the ryokan was another memorable meal made up of tiny little dishes with contrasting textures and flavours. 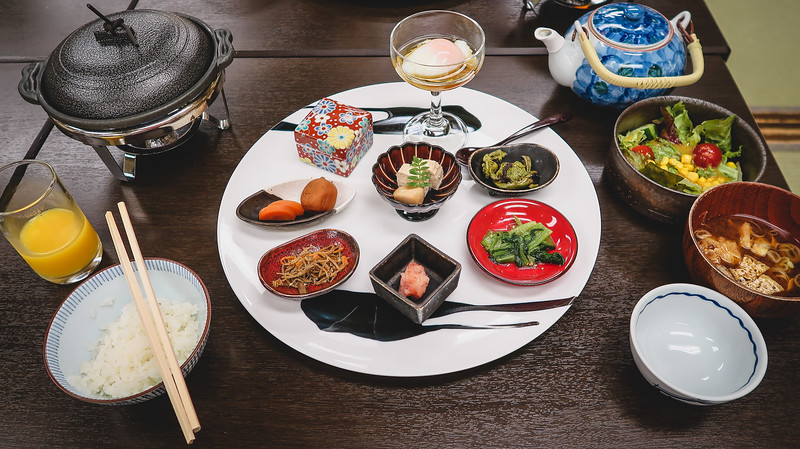 We had been asked to choose a time slot for breakfast the previous night and being major foodies, we were the first to arrive in the breakfast hall. We quickly learned that breakfast at a ryokan is very different from your average hotel breakfast buffet.

No pancakes, scrambled eggs or bagels around here, but boy, was it wonderful!

Again another video to show you the experience.

Because Takayama is such a beautiful destination in the heart of the Japanese Alps, it makes for a great weekend getaway and there are numerous ryokans to choose from. As you already know, we stayed at Ryokan Seiryu (you can view their current rates here), but I’ve also included a few other options below. These are some of the top-rated ryokans in Takayama and they come at varying price points:

Staying in a ryokan can be a pricey affair, but you are paying for more than just a place to sleep. Most ryokan stays include a multi-course dinner followed by breakfast the next morning, plus let’s not forget that you also get access to the onsen, so it’s a full experience!

Keep in mind that the price of your ryokan stay will also vary depending on the type of room you select, whether you have access to a private onsen, and the number of meals you want during your stay, but if you can work it into your budget, it’s worth the splurge!

Would you want to experience a Japanese ryokan stay?