If there’s one activity that was at the top of my Japan travel bucket list, it was to stay in a futuristic capsule hotel! Yes, I’m talking about those small individual pods that are cheaper than a hotel room yet offer more amenities than you’d expect to find in such a confined space. They’re all over Japan.

Because we spent a whole month in Tokyo, there was no way Sam and I were going to be sleeping in a capsule for that long, but our final night in the city seemed like the perfect opportunity to test out sleeping in a pod.

Since I’m in charge of booking accommodations when we travel, I made it my mission to find the coolest, most modern, and futuristic capsule hotel in Tokyo! My pick:

What is a capsule hotel exactly?

So, what exactly is a capsule hotel, you ask?

Well, this is a type of hotel that originated in Japan with the purpose of providing cheap and basic overnight accommodations. Instead of rooms, guests sleep in capsules, which are spaces large enough to hold a mattress and not much else. There is enough room to comfortably crawl in and sit upright, but it’s far from a hotel room.

The capsules are stacked side-by-side, two units high, similar to bunk beds. They have either steps or a ladder for those guests staying on the second level pods, and sliding doors or curtains that offer privacy.

In some aspects, capsule hotels are similar to hostels because you do have shared spaces like toilets, showers, dining rooms and living areas, but instead of bunk beds, you get capsules.

As for the name 9 Hours, the idea is that that’s all the time you really need in a capsule hotel: 1 hour to shower, 7 hours of sleep, and 1 hour to get ready in the morning…though I may have done a little more sleeping and a little less getting ready.

My experience at 9 Hours

We arrived at the capsule hotel in Shinjuku in the early afternoon and made our way up to the reception which is located on the 8th floor.

During check-in, we were each given a card with a QR code. This was our key for the duration of our stay and we needed it to access our lockers and store our belongings.

This is where Sam and I went our separate ways since men and women have separate dorms on different floors.

I went over to my locker which had enough space for 1 piece of luggage and 1 daypack. (My Osprey Sojourn was a bit plump, but I still managed to squeeze it in!)

Inside my locker I also found an overnight kit containing:

It was nice having a common space to hang out in, because once you come back from a day of sightseeing, you don’t necessarily want to crawl straight into a capsule. The common area had benches, individual working desks, and a long shared table.

The bathrooms took up an entire floor and there were rows of toilet stalls and shower stalls. The shower stalls had shampoo, conditioner and body wash, which is great if you’re not travelling with a full toiletry kit. Then in the middle of the bathroom, there was a long counter with a row of sinks and mirrors.

It was all very efficient and there were enough stalls that you never had to wait in line. 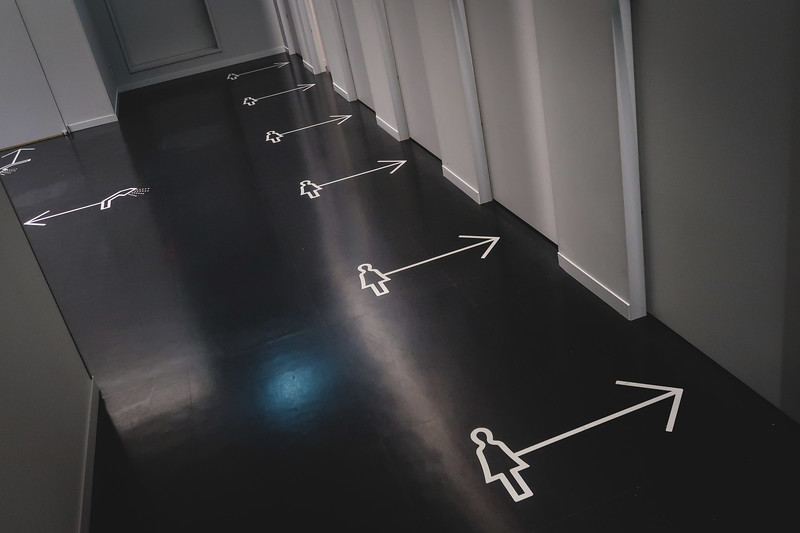 Some people worry that it might feel claustrophobic inside the capsule, but personally, I found them to be surprisingly spacious.

Considering the whole premise behind a capsule hotel is to be as space efficient as possible, I found I was able to sit up straight without bumping my head on the ceiling, and there was plenty of room to stretch my arms and legs. You can’t stand upright, but it’s not Dracula’s coffin either!

This wasn’t the most pimped out capsule out there (some have TVs and radios!), but there was a USB port to charge my phone, two tiny shelves, and a light switch. 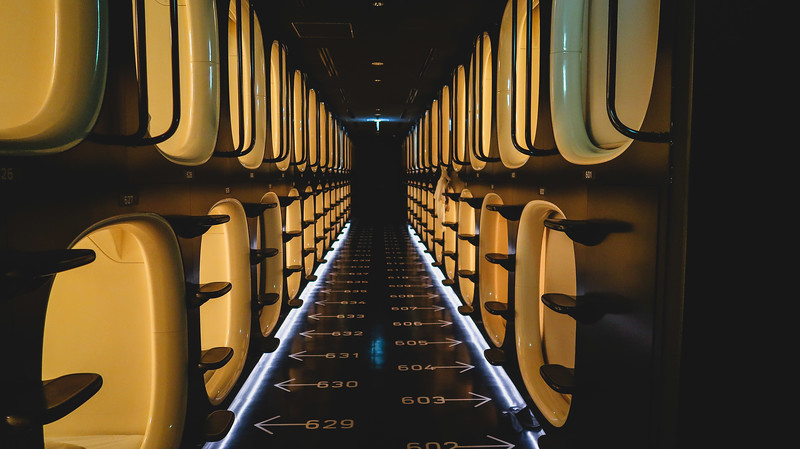 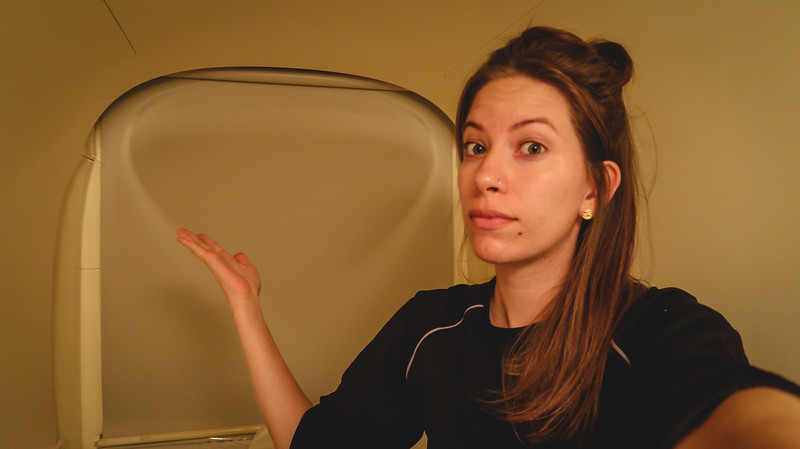 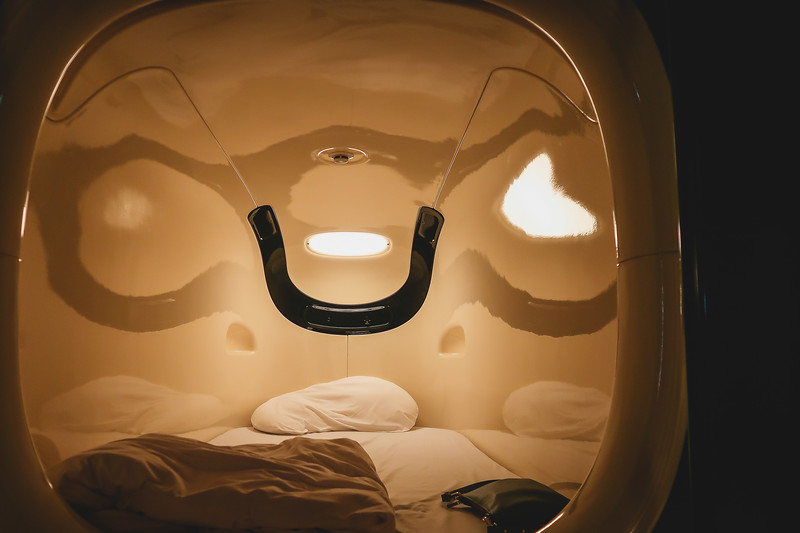 As for comfort, the bed consisted of a thick mat with a bedsheet, a half-moon shaped pillow, and a warm duvet.

I had a good night’s sleep. I didn’t wake up during the night, and the following morning Sam had to text me to ask if I was up yet. I guess I had a bit of a longer snooze than I thought.

We filmed a video of the whole experience:

What should you bring to a capsule hotel?

The 9 Hours capsule hotel provides you with an amenity kit, so there’s not a whole lot of extra stuff that you need to bring.

The two things I would suggest are: a pair of flips flops for the showers, and some earplugs if you’re a light sleeper and are planning to spend a few nights in a pod.

Also, while pyjamas are provided, they’re one size fits all and made for a smaller frame, so you might be more comfortable in your own.

Would I recommend staying in a capsule hotel?

Yes, for the experience, but not long term!

As you may already know, I love booking unique stays when I travel, and while I enjoyed the novelty of sleeping in a capsule hotel, I felt like one night was enough.

Perhaps my younger self would have been okay spending a week in one, but the truth of the matter is that a capsule hotel is a lot like a hostel, albeit with a bit more privacy.

There were still minor annoyances like the sounds of people talking/snoring/farting through the night (Sam tells me it was especially symphonic in the male dorm).

Plus, because of the limited amount of space in the capsule, all our belongings had to be stored in the lockers so there was a lot of going back and forth to retrieve things.

I think staying in a capsule hotel is something I would only do for short stays (1-3 nights max), but I wouldn’t want to spend my whole trip living out of locker and sleeping in a pod.

Also, because Sam and I travel as a couple, it’s often cheaper to book an AirBnB rather than pay for two individual capsules. So that’s my take on it.

Lastly, speaking of unique accommodations in Japan, I definitely think staying in a ryokan for the night is worth the splurge!

Other 9 Hours locations in Japan:

In case you’re interested in this chain of futuristic capsule hotels (because who wouldn’t want to feel like they’re in a spaceship?), at the time of writing this, 9 Hours has locations across 4 cities in Japan.

There’s an especially large selection in Tokyo, with branches in different neighbourhoods. One of the capsule hotels is female only, and there is also an airport location if you’re looking for convenient accommodations at the end of your trip. Here’s the full list:

Have you slept in a capsule hotel?
How was your experience?