Gdansk was our fourth destination in Poland after visits to Krakow, Wroclaw and Poznan, and this northern harbour city by the Baltic Sea definitely had a bit of a different feel.

To me, Gdansk felt less like a city where you tick off main attractions and more like a place where you need to wander and slowlly soak it all in. Oftentimes, the sights that caught my attention in Gdansk were things like a random row of buildings, an unusual museum, or a brick gate hiding beautiful views just behind it.

We spent a week in Gdansk and for the most part, I was perfectly happy to walk around aimlessly and let the city reveal itself to me. 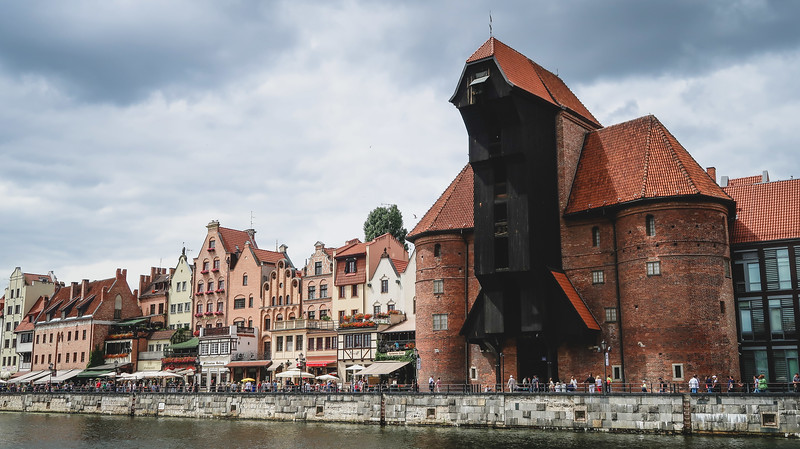 THINGS TO DO IN GDANSK

Walk the length of Długa Street

Unlike most Polish cities, Gdansk doesn’t have a central square, but what it does have is a long pedestrian street which kind of acts as a gathering place; that’s Długa Street, also known as Long Lane.

Starting on the west end of Długa, you have Brama Złota, the Golden Gate which marks the start of the pedestrian street. Once you walk through the gates you are met with two rows of townhouses standing shoulder to shoulder and running all the way down to the very end of the street. The bottom floors of these buildings have been converted into restaurants, souvenir shops, boutiques, cafes and bars, so it’s quite lively with out-of-towners. 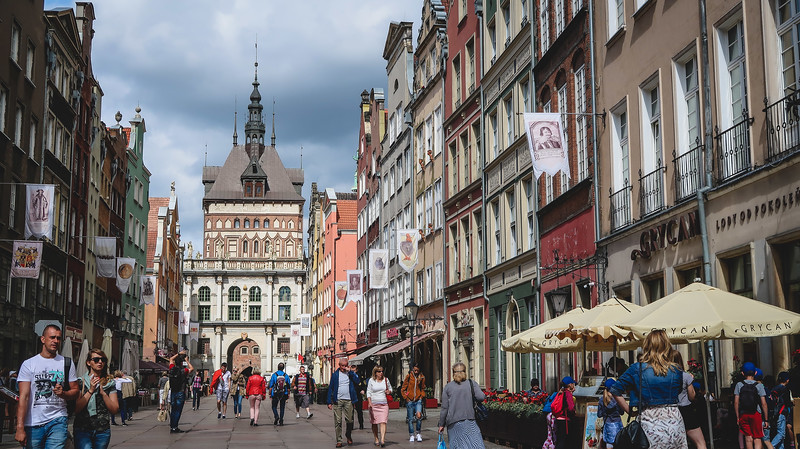 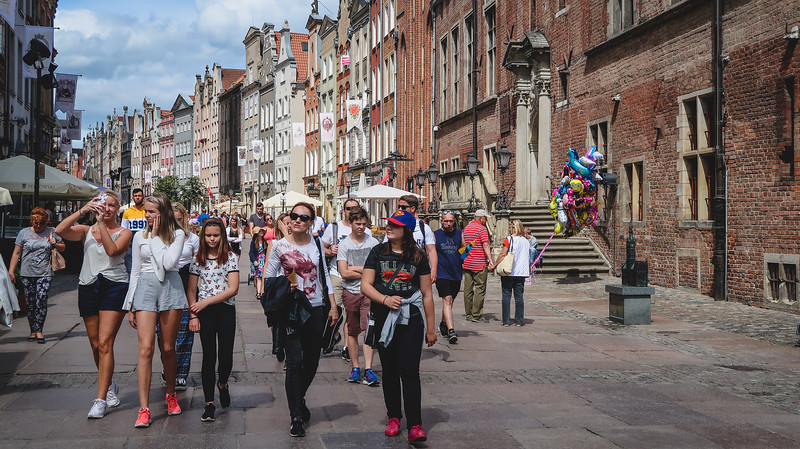 Długa is peppered with landmarks like the Town Hall, which houses the historical museum; Artus’ Court (sometimes spelled Arthur’s Court), which was once a meeting place for merchants and now houses the History Museum; Neptune’s Fountain, a nod to the sea god from this seafaring city; and lastly the arches of Brama Zielona, which bring you straight to the waterfront. 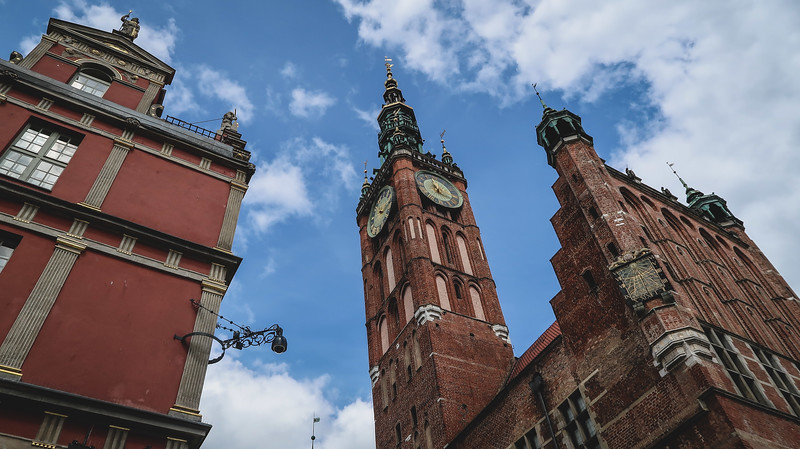 We made time to visit the Historical Museum and really enjoyed it. For starters, the museum is set in a 14th-century Gothic Renaissance building and it has some pretty stunning ceilings, fireplaces, and spiralling wooden staircases, but it also has an interesting exhibit that looks at life in Gdansk before the war.

These may not be huge attractions on their own, in fact, it’s even easy to miss some of these places if you’re not actively looking for them, but they are all smaller pieces of the puzzle that make Gdansk special.

Check out the waterfront

Once you reach the end of Długa, you’ll find yourself on the shores of the Motława River, which might even give you flashbacks to Copenhagen’s Nyhavn. The river is lined with a mix of red-brick buildings done in the Hanseatic style and pastel facades adorned with flower boxes.

Along the waterfront, you’ll come across Gdansk Crane, which pays homage to the city’s history as a medieval port city. At one point, this was the biggest crane in the world, and it was used to transfer cargo and to put up masts on ships.

Continuing north, you then have the Maritime Culture Centre on the left bank and the National Maritime Museum on the right bank. There’s no convenient bridge for crossing without retracing your steps, but there is a quick ferry service that can whisk you across for just a few zloty. 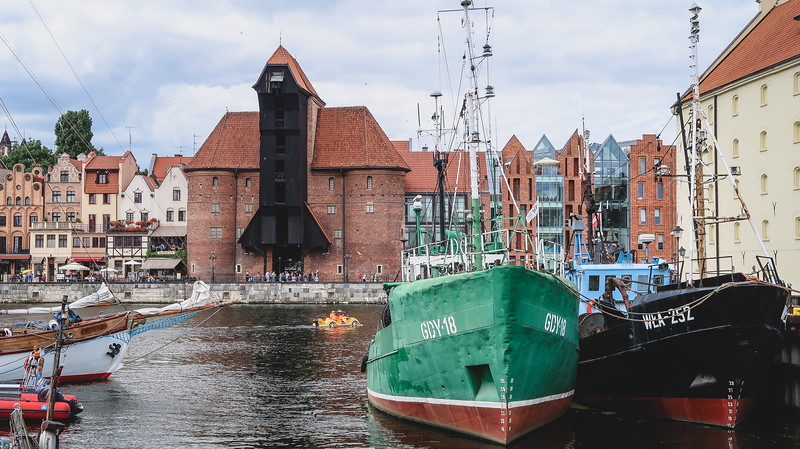 Just in front of the National Maritime Museum, you’ll find the SS Soldek, a Polish coal and ore freighter that has been transformed into a floating museum.

And while you’re here you can hop on a myriad of river cruises, be it on a mock pirate ship, a motor boat that looks like a car, or if you want to put some muscle into it, even by kayak.

We also came across a floating restaurant called Oskar, where you can get fish and chips with a pint. 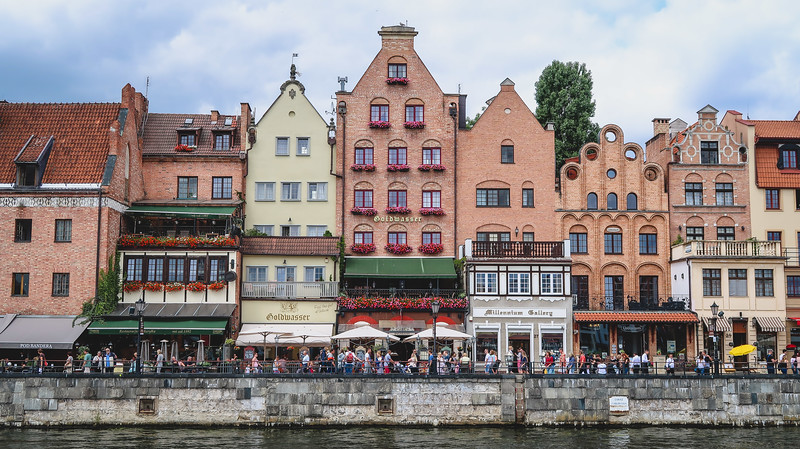 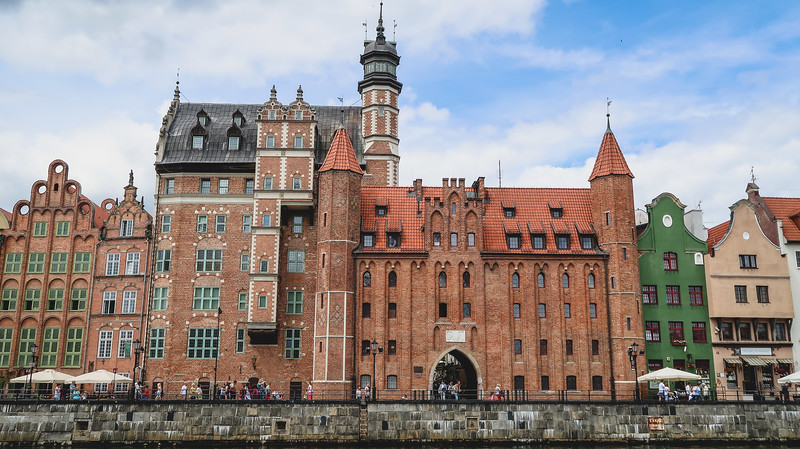 For city views, we decided to climb to the top of St. Mary’s Basilica.

This is one of the largest brick churches in the world and as you can probably imagine, it dominates the heart of the Old Town. This also means that you better be ready to do some serious climbing. Reaching the 78-metre tower involves climbing 405 steps, and there are stretches where you may even wonder why you ever decided to do so.

I will say that if you don’t enjoy heights, this is probably not the place for you. Once you reach the second staircase within the tower, you can basically see all the way down which can give you (me!) some vertigo. I was basically hugging the wall with my clammy hands the whole way. 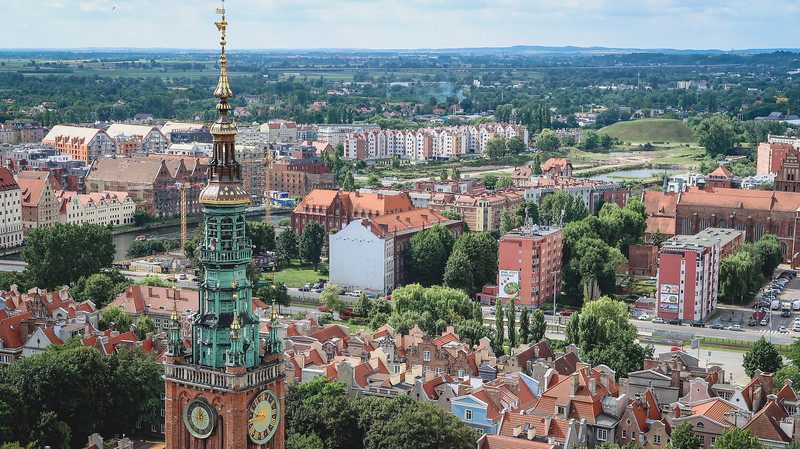 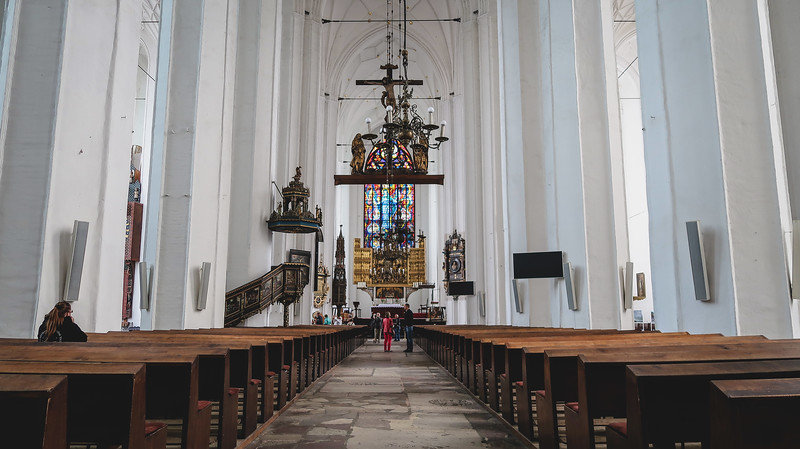 Eat at a milk bar

I know I probably sound like a broken record at this point; I feel like I mention milk bars every time I talk about Poland, but I’m kind of obsessed with them! They are cheap and you get massive portions of hearty-homecooked meals, so what’s not to love?

In Gdansk, we found Bar Mleczny Neptune, which is located right on Długa Street. We went back there twice and tried everything from savoury pancakes to cutlets with dill potatoes. The nice thing about this milk bar is that you just point at the food you want and then pay for it after making your selection, as opposed to other milk bars where you have to decipher a Polish menu and pay before you get your food – definitely the less intimidating of the two options.

Learn all about Baltic Gold

The Amber Museum was a complete surprise for me. I didn’t even know this place existed before visiting Gdansk, but soon after arriving in the city we started seeing amber jewellery and amber souvenir shops everywhere, so we decided to visit the museum and see if we could learn what all the fuss was about.

It turns out that amber, or Baltic Gold as it’s referred to in this area, comes from the resin of coniferous forests that grew in the region. The largest source is found east of Gdansk around the Kaliningrad enclave, and the combination of northeasterly winds and sea currents means that a lot of it washes onto the beaches of Gdansk.

The museum had some interesting displays of amber inclusions (that’s amber with small plants or insects that became trapped in the sap), amber-adorned furniture and amber jewellery.

Another bonus of visiting the Amber Museum is that the top floor has a viewing deck where you get some pretty nice views of the Old Town and Długa Street. It’s not nearly as high as St. Mary’s but I almost feel that’s a good thing! 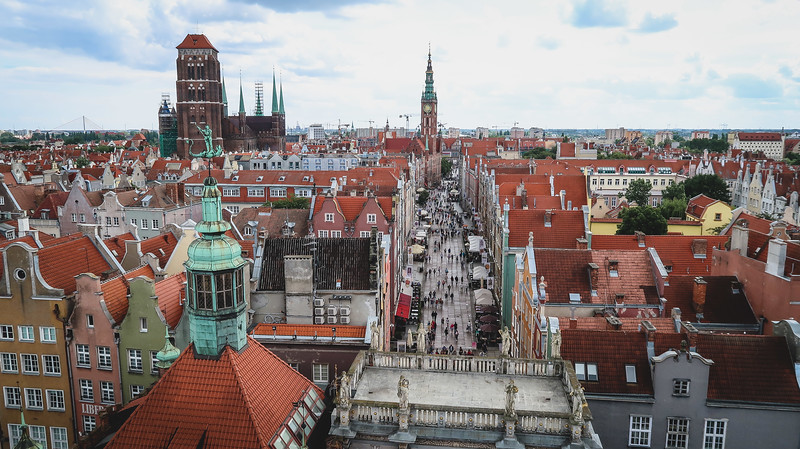 And if Gdansk is giving you some Amber fever, just walk over to Mariacka Street, which is often nicknamed Amber Street. It’s lined with even more amber shops and you’re sure to find a souvenir or two.

I have to admit, I knew nothing about Solidarity before coming to Gdansk, but when I told my dad where I was travelling, he insisted I needed to dig a little deeper into the history and that’s how I ended up at the European Solidarity Centre.

In a nutshell, Solidarity is the name of a Polish trade union that was founded in 1980 on the grounds of the Lenin Shipyard with Lech Wałęsa, an electrician by trade, as the leader of this movement. (He would go on to become a Nobel Prize Winner and President of Poland.)

To understand the importance of this movement, we need to go back to the 1970s, a time when wages had been frozen while food prices continued to rise, a time when foreign debt was mounting, and a time when underground groups were forming to fight against the system.

When Solidarity was founded, it became the first trade union not under the control of the communist party, and just a year after it was founded it had reached 9.5 million members, which at the time made up a third of the working-age population in Poland.

The European Solidarity Centre does a wonderful job of laying out the history in a chronological timeline and it’s a great place to learn about a movement that shaped the city.

We went on 3 different day trips from Gdansk, all of them very easy to do.

Sopot – This is a popular seaside town on the shores of the Baltic Sea and it’s only 15 minutes by train from Gdansk. We spent our day here walking on the longest wooden pier in Europe, enjoying a cruise of the harbour, stuffing ourselves with baked pierogi, and then strolling along the beach because the water was too chilly for us!

Malbork – This town is home to Malbork Castle, which is the biggest castle in the world by land area. Our entire visit was devoted to visiting the castle. The train from Gdansk to Malbork can take 30 or 50 minutes depending on which one you hop on.

Gdynia – We visited Gdynia thanks to our friends Agness and Cez from eTramping. We first met a few years back in Hong Kong (and I’ve also met up with Agness in Amsterdam and Seoul), so when we found out we were all in town, we had to go out together. Cez grew up in Gdynia, so he showed us around his ‘hood. Gdynia is just north of Gdansk and Sopot (the three are called the Tricity) and in comparison to the other two, Gdynia had more of a modern and youthful feel with wider streets, newer buildings, and lots of young kids hanging out at the beach. Oh, and you can get some delicious waffles (gofry) along the boardwalk and load them with nutella, whipped cream, strawberries, and all sorts of sugary toppings.

Where to stay in Gdansk

We rented an apartment in the Old Town just 1 block from St. Mary’s and it was a beautiful place. The city also has a nice mix of boutique hotels, bed and breakfasts, and guesthouses on offer. You can get a better idea of rates here.

I will say that Gdansk is a little pricier than other cities we visited in Poland, but it’s well worth the visit!

Have you visited this Baltic city?
What were some of your favourite things to do in Gdansk?