Wilderness: [wil-der-nis] a wild and uncultivated region, as of forest or desert, uninhabited or inhabited only by wild animals. 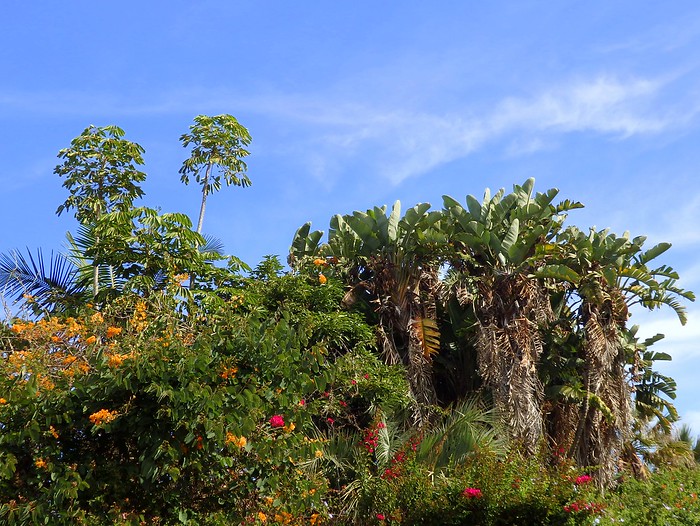 I have to admit, I came to Wilderness based on the name alone. I needed a destination to help break up the trip from Port Elizabeth to Cape Town, and with a name like that, the destination practically jumped off the map.

Maybe it’s because we came here with no expectations, maybe it was the wonderful hospitality shown to us by our new friends at the Wild Farm, or maybe it was the combination of lush hiking trails and wide open beaches. Whatever it was, Wilderness turned out to be one of my favourite places of my South Africa backpacking trip.

Now let me show you how I spent my days in this little wild slice of paradise: 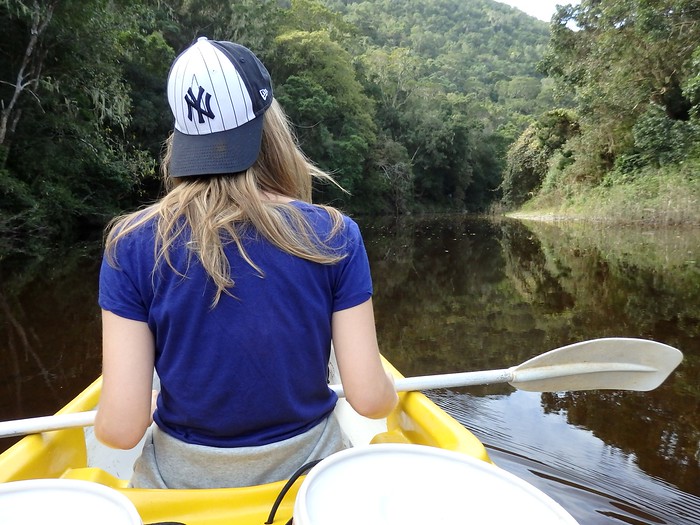 On our first morning in Wilderness, Sam and I decided we would go on a little canoeing and hiking excursion. We made our way down to Eden Adventures, where we paid 280 rand (roughly $22 USD), for a canoe to paddle up the Touw River.

I had been on a double kayak with Sam before (a very wobbly experience!) so I was a bit worried about ending up in the water on this outing, however, the river was incredibly calm and the canoe also offered some extra stability. 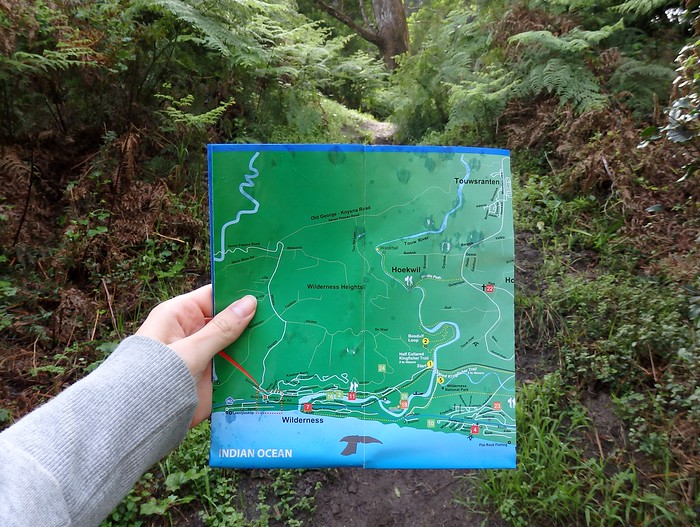 At 10 in the morning we were the only people out on the water, save for the company of a few ducks and birds who seemed undisturbed by our paddling. We travelled upstream until we couldn’t go any further, and then we left our canoe on a pebbly beach. This is where we got on the Giant Kingfisher Trail to continue the journey on foot.

From there, we set into a lush forest that yet again shifted my perception of South Africa. Prior to travelling here I assumed that the landscape would be quite dry and barren, yet here I was surrounded by moss covered trees, a carpet of ferns, and the sounds of chirping birds. Could South Africa be any more diverse?! 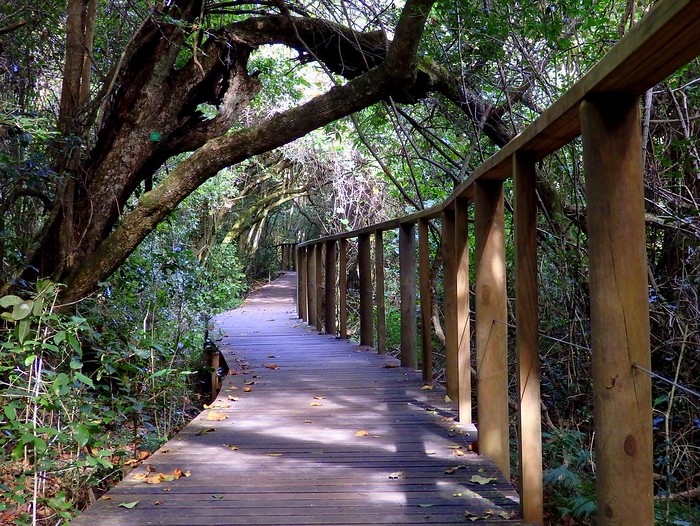 The trail eventually gave way to a wooden footpath that we continued to follow until we could hear the sounds of a waterfall ahead. This is when we realized we probably should have packed a bathing suit because there was a beautiful pool of water just above the waterfall and a few hikers were already enjoying a swim.

I have to say, this was my favourite day in Wilderness! We didn’t do anything extraordinary, but sometimes all you need is a relaxed day in nature

The following day we decided to explore Kaaiman’s Grotto – a place that locals couldn’t quite find the words to describe, yet insisted that we needed to see.

It’s a cave…but it was a restaurant…and it was abandoned after the train tracks were blocked…but now it’s a homeless shelter…and an interesting man lives there…and so do a whole bunch of other people – it’s super arty, you should really go visit!

We weren’t quite sure what to expect of this remote cave-restaurant-shelter that can only be reached on foot, but curiosity go the best of us and we decided to go see for ourselves.

Sam and I followed the tracks until we reached a section were the mountain had collapsed, then we went around and reached the mouth of dark tunnel carved into the face of the rock. This is where I hummed a little tune as I walked into the darkness, reliving memories of my train derailment inside a Thai tunnel and hoping I wouldn’t encounter any bats, rats, or strange characters. 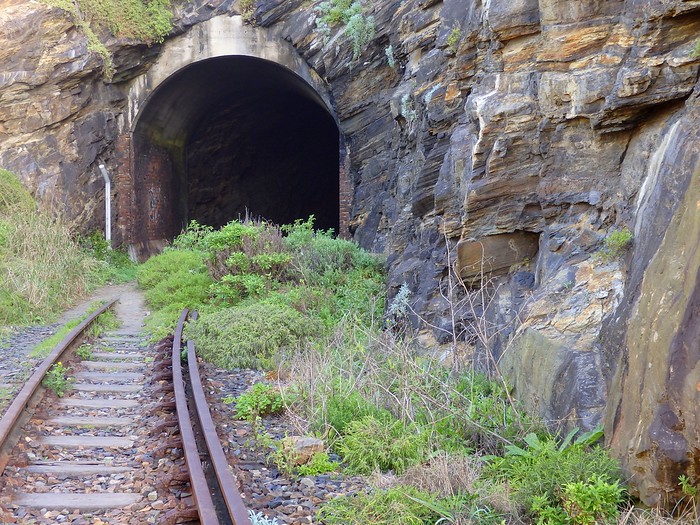 And then we saw it – the magnificent cave-restaurant-shelter that people had struggled to put into words.

Ahhh, that’s what they meant!

I approached the cave tentatively and that’s were I met Clifford, the man responsible for all of this. He was sweeping the floor and tidying up when I arrived, but he offered to show me around, so I followed him through the maze he has created. After showing us around, we sat down to chat and he told us the story of how this all came to be.

He told me that God brought him to this place to help the homeless, so he built a shelter to help those who have fallen on hard times and to assist them as they try to get back on their feet. His only rules being: no drugs, no alcohol, and you must actively search for work.

The cave had single rooms and even family rooms with bunk beds. There was a living area, a small kitchen, and a room for prayer which he called ‘Father’s Room’. At the time I visited there was one guest staying there, and a second had recently moved out. It was certainly unlike any shelter I had ever seen before.

I asked him where he found all the things inside the cave – the dolls on the coffee tables, the furniture in the bedrooms, the masks, plumes, butterflies and flowers – and again he told me that God had provided every item inside the cave. Some items came as donations from his brother’s church, others he found unwanted on the side of the road, and a few were gifts that former cave dwellers had brought back.  He told me that when he first came here there was nothing, so he started collecting sea shells to try and turn this into a beautiful place where the homeless would feel valued and special. (There was even an article written about him on the Washington Post if you’re interested.)

After that chat it was time to get going, so we left a donation and continued on. (If you do decide to hike out to Kaaiman’s Grotto, do keep in mind that Clifford allows curious tourists like me to visit because they help keep this unique shelter running).

The train tracks then led to an old bridge (a bit rusty and a little unnerving if you’re afraid of heights), and then continued on through the dolphin’s eye (see it in the rocks?) and towards Victoria Bay which is a popular surf spot.

When we weren’t sightseeing, we were enjoying the laid-back vibes over at The Wild Farm.

I know when choosing accommodations most of us like to be right in the heart of the village/town/city so that we won’t miss any of the action, but in this case being a little far removed proved to be the right decision.

This old dairy farm turned hostel is perched on a hilltop and boasts incredible views of the ocean below. Sam and I got a little log cabin complete with an en suite bathrooms and a piping hot shower. The early settlers would have been proud! 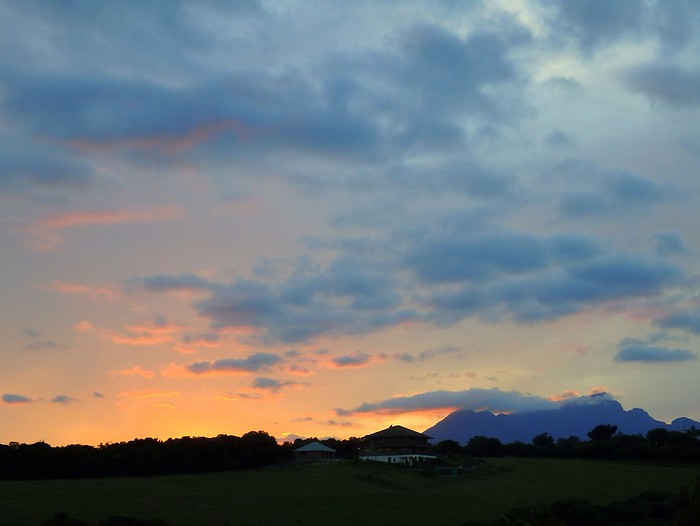 The staff was super friendly so we spent most of our evenings on the property either enjoying beers in the common area or having a proper braai (South African barbecue) for dinner. They also had the cutest little Cavalier King Charles Spaniel as a pet, so it didn’t take very long for me to adopt her as my own. This is a bit of blurry photo, but you can see that she even won Sam over and he is a self-professed cat lover.

Have you every visited a place based on its name alone?
How did it turn out?