It’s probably a good thing we were riding on horseback because the trek began after lunch; a very very big lunch, set in a yurt, with a spread that made it feel like Thanksgiving. On the table before us were plates of tomato and cucumber salad with dill, a hearty soup with carrots and cabbage, and plov, a staple at Kyrgyz dinner tables featuring rice with fried beef, onions and carrots. And because we weren’t yet bursting at the seams after that three course meal, there were also little pieces of fried dough known as boorsok, which we enjoyed with jam, as well as little cookies and chocolate bars. Some riders may have needed a little push in the derriere to mount their horses once the meal finished, but let that be a testament to Kyrgyz hospitality. 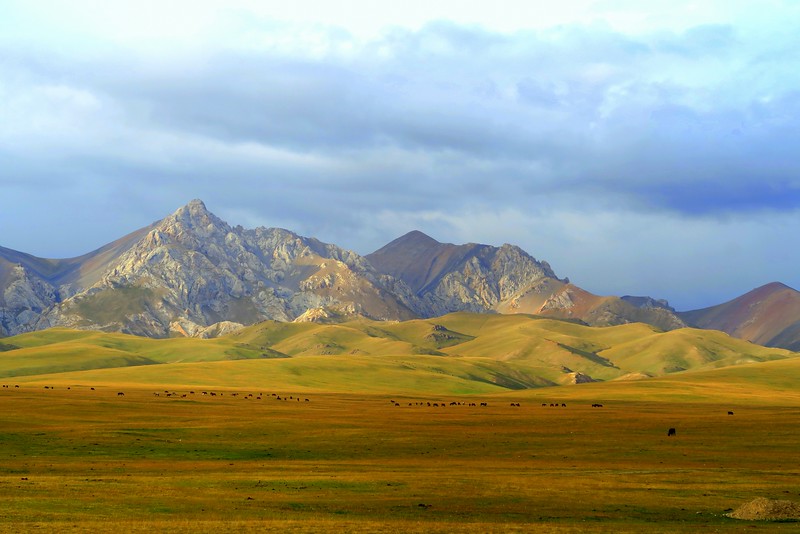 But let’s back up a little bit. The adventure began the previous night in the town of Kochkor. This would be our launching pad for the 2-day horse trek to Song Kol, a beautiful alpine lake set in Kyrgyzstan’s northern Naryn Province.

We arrived at Mira Guesthouse where we unloaded our bags and were soon called to dinner. Here we were treated to a traditional music performance by a band that spanned three generations. We may not have understood the words as they were singing in Kyrgyz, but at the start of each song the leader of the troupe would tell us what each song was about; there were songs about taking the animals up to the summer pastures, songs about young love, and songs about legends and national epics.

Having just arrived in Kyrgyzstan the previous night, this was our first foray into the culture and we all watched with wide eyes and intrigue as the musicians pulled out instruments we’d never seen before and even used their throats to produce guttural sounds which mixed with the music. 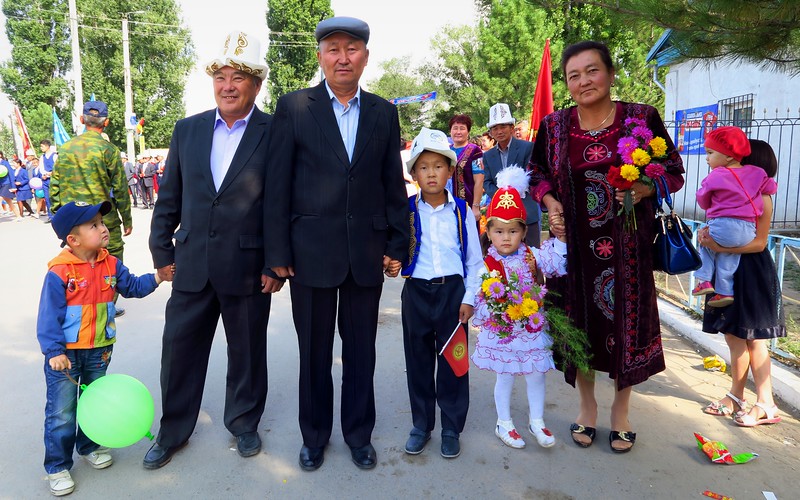 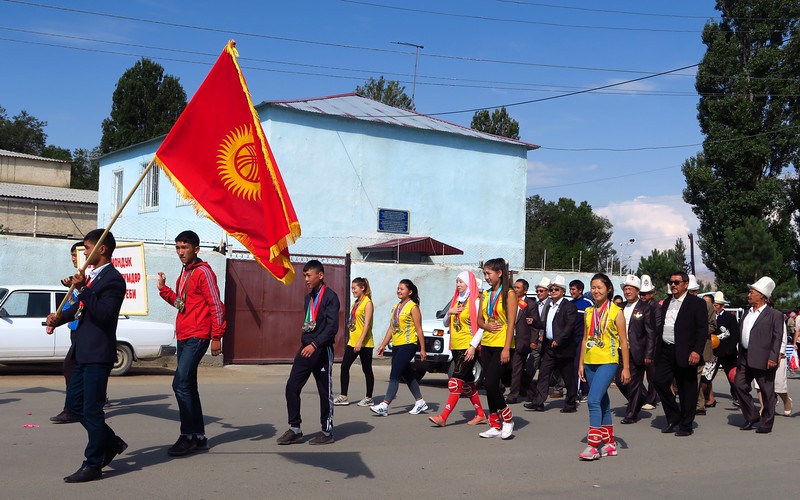 The following morning, we woke up to the Independence Day celebrations, so we headed into Kochkor to check out the festivities. Even though it was only mid-morning, music was blaring from giant speakers on the side of the road, the back streets were filling up with vendors selling everything from shashlik to cotton candy, and the parade was already in full swing.

We spent some time taking photos – this is one country where people love to have their photo taken and they’re not shy about asking! – and then it was time to head into the mountains. After a short drive, we arrived at our first camp where our host family stuffed us with the aforementioned meal. Then, hauling the few possessions that we had managed to cram into our daypacks, we bid our hosts farewell and rode into the valley where we began the slow ascent up the mountains. 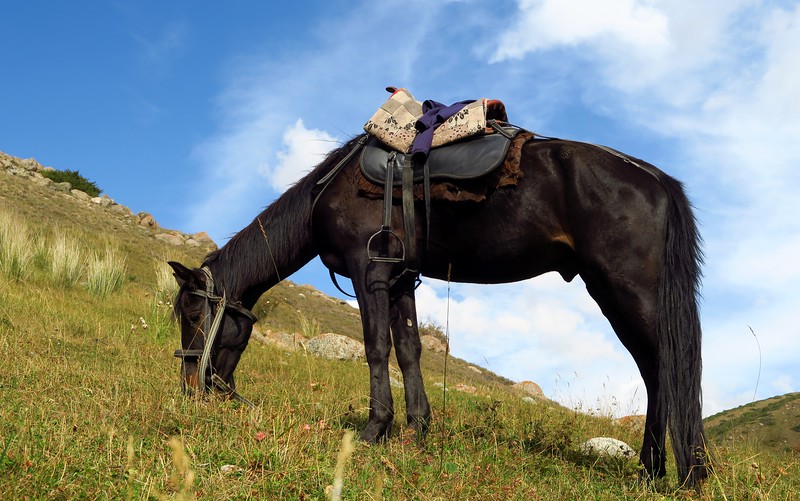 On our first day, we rode for roughly 5 hours. It was a slow ride with a lot of zig-zagging up and down switchbacks, but it was a great pace to enjoy the surrounding scenery. The ranges we crossed reminded me of a mix of the Scottish Highlands, the Drakensberg Range in South Africa, and the dreamy landscapes of Iceland I’ve only ever seen in photos. And you know what was even more amazing? Seeing eagles flying through the valleys right at home in their natural habitat!

After a long afternoon of riding, we arrived at our yurt camp just as the sun was setting. Our camp was small with only 3 yurts: 1 for our nomadic host family and the other 2 for guests.

You’re probably wondering what a family is doing living in the middle of a mountain range a 6-hour horse ride from the nearest settlement, am I right? Nomadism was once a traditional way of life in Kyrgyzstan, and while many people have settled into life in urban centres, there are still families that pack up their homes and spend the summer months up in the pastures so that their animals can graze and fatten up for the winter. Life up in the pastures is basic and it brings its own set of challenges, but it’s also quiet and peaceful, and I think this is what draws travellers all the way out there.

In our yurt, we were treated to yet another delicious dinner, where the cups of tea kept flowing and the plates of food kept on coming. By the time the sun set, we were all ready for bed so we crawled under the blankets for the night even though it was still relatively early.

This was my first time sleeping in a yurt and it was one of the best sleeps I’ve had. There were no mattresses, just layers upon layers of blankets that offered both padding and warmth. I don’t know how, but I managed to sleep a solid 10 hours and I awoke the following morning to the sound of goats hoarking which is a strange way of waking up – I was blaming it on the boys next door until I walked out the door! 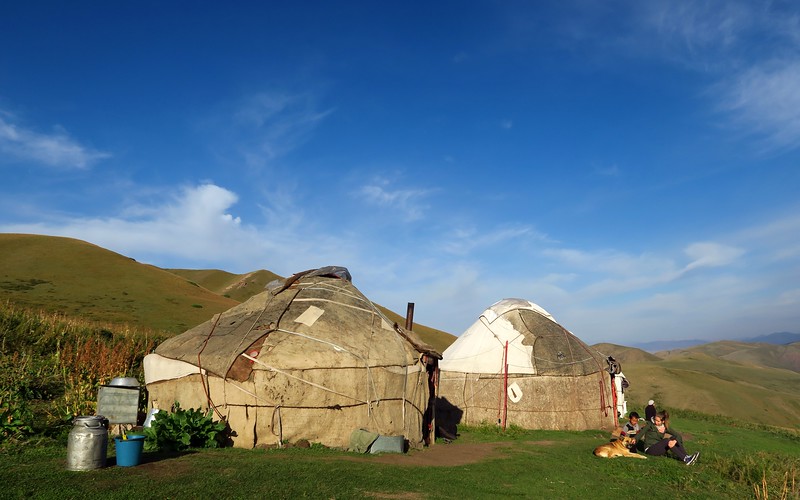 After a hot breakfast, it was time to get back on our horses and continue the journey. The funny thing is that our horses had hopped away overnight even though their front legs were tied, so our guides had to wander down the valley and then bring them all back to camp.

Since we had a bit of time in our hands, I befriended the family’s dog and then the family’s young boy also came over. We didn’t speak each other’s language but the young boy was able to teach me how to say ‘whiskers’ in Kyrgyz – while tugging at the dog’s whiskers! – and then I taught him how to say ‘horse’ in English.

The second day of riding brought us across the Kimliche Pass where we had sweeping views of the surrounding valleys. That morning was probably the hardest day of riding for me as the downhill stretches were destroying my knees, so I gave my legs and my horse a break and ended up walking a few kilometres. 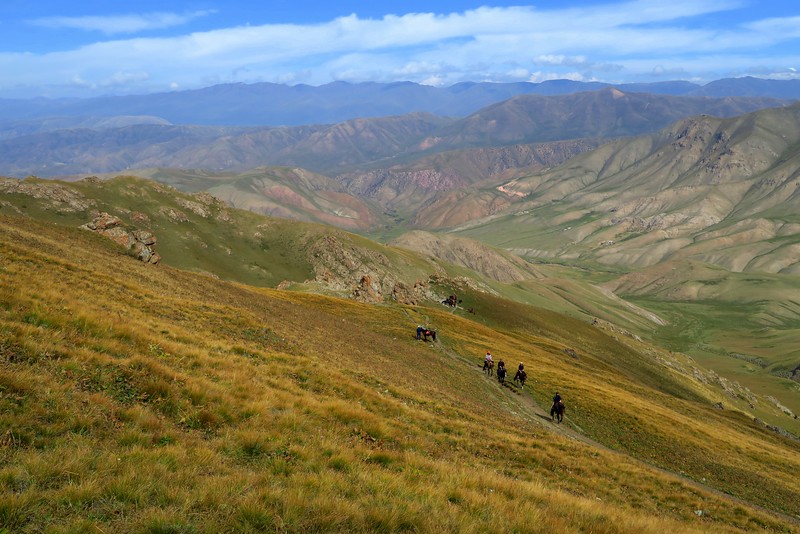 By the time we reached our lunch stop at yet another yurt camp, we were all famished and finished everything that was put in front of us. This camp is also were I had the best meal of the trip! Picture a loaf of bread being pulled out of a wood-burning stove, and then add a dollop of home churned cream with raspberry jam. It was like afternoon tea nomad style. My mouth waters every time I think of it!

I reluctantly hopped back on the horse after that meal and then we rode the remaining 2 hours along the shores of Song Kol Lake. We followed the edge of the lake as the clouds turned darker and started rolling in on us, but we made it to camp just before the rain hit. 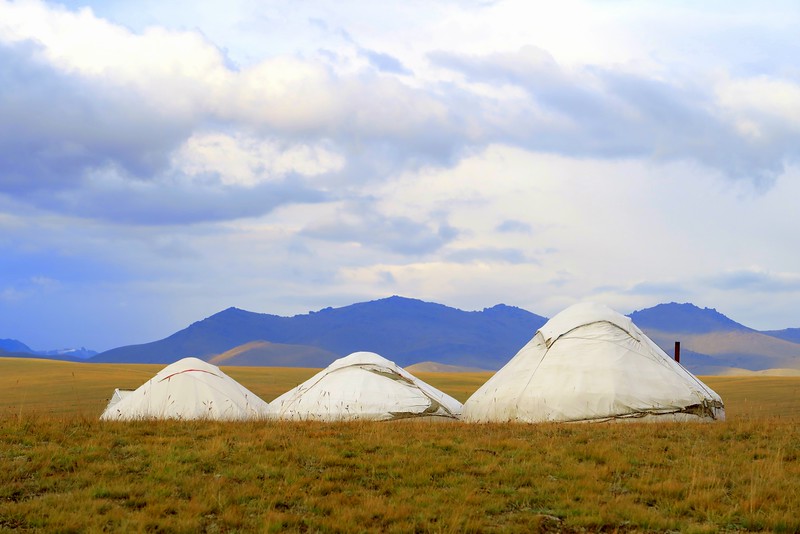 In total, I spent 3 weeks in Kyrgyzstan, but I have to say my favourite spot was here on Song Kol Lake. We had jagged mountains to one side, the lake with a row of snow-capped mountains to the other side, and nothing but a vast plain with a sprinkling of white yurts in between. It was already postcard perfect, but then sunset hit and the mountains started glowing in the soft light, and it was the most beautiful thing I have ever seen. We all hung around the lake’s edge until our fingers froze and the sun slowly began to dip behind the clouds; even the dogs we had befriended at the camp joined us. 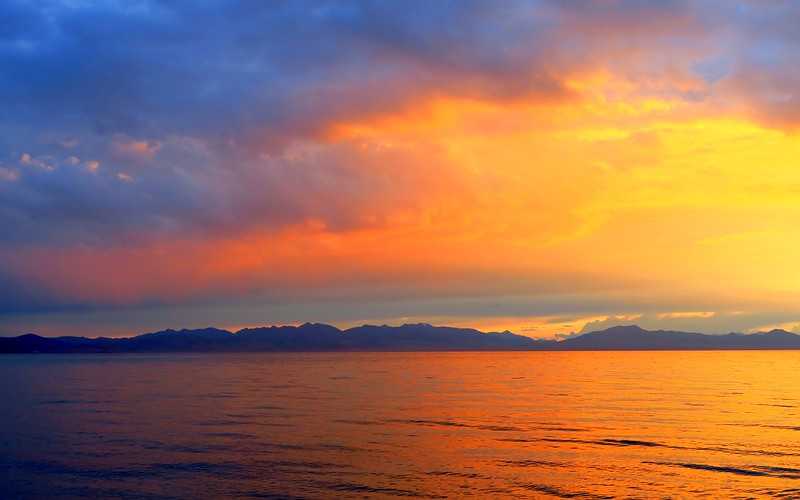 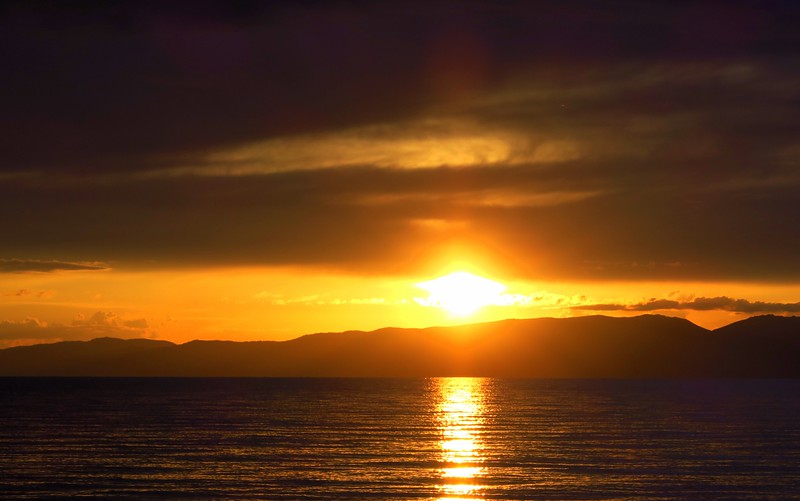 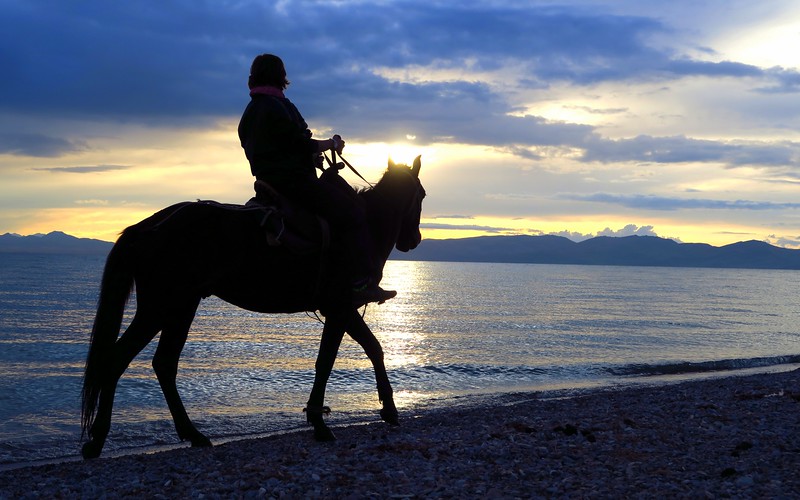 That evening we had yet another feast, this time sharing some vodka and cognac with our host family. We also had a crackling stove inside our yurt, so it was toastier than our previous night and it wasn’t long before we were all asleep.

When we woke up the following morning, we enjoyed one last breakfast, and just like that our 2-day trek to Song Kol Lake was over. We packed our bags, said our goodbyes to everyone, and hopped in a van that drove us out of the valley and down the steep mountain range back to the town of Kochkor, where we resumed our travels around Kyrgyzstan.

If this sounds like your type of adventure, you can check out Feel Nomad’s tours, which include Song Kol Lake.

And if you want to tackle an even lesser known trail, there’s the Panorama Trek outside Bokonbayevo, which is a 3-day trek that does a big loop through the valley. Picture yurt stays, an alpine lake, ancient petroglyphs, and meals shared with your host family. 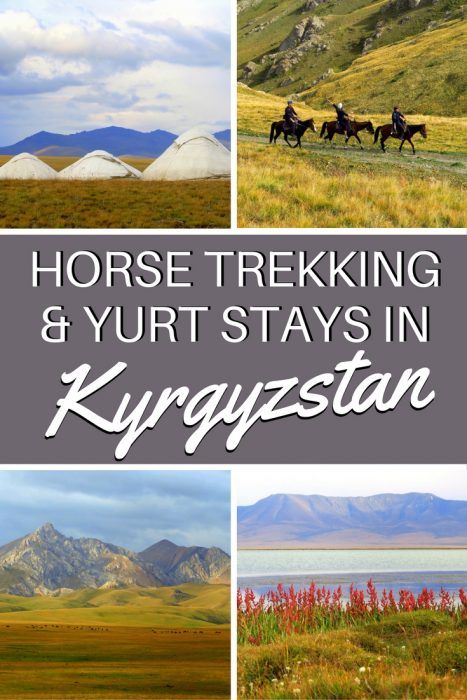 Have you been to Kyrgyzstan?
Would you do the trek to Song Kol Lake?

This trip was made possible with the support of Discover Kyrgyzstan and USAID. As always, all opinions expressed here are my own.