Do you ever plan your travels around a specific theme? Maybe you’re a foodie who likes to check out lots of restaurants and markets, or a night owl who loves discovering bars and speakeasies, or a shopper who schedules time for pop-up shops and boutiques in between all the sightseeing.

During my recent visit to London, I found myself exploring the city through a theme that’s very different from my usual travels: art.

I didn’t really plan it this way, but at the end of my week in London, I found myself looking back and realizing I had gone to a concert in a stranger’s home, checked out street art in East Croydon, watched a play in the West End, gone to the Royal Academy of Arts for one of their Lates, and admired plenty of art (and views over London!) at the Tate Modern.

Music, street art, theatre, performance art, and visual art – that’s far more art than normally features in my travels! But, trying something outside my element turned out to be a lot of fun (I’m usually the foodie going from market to restaurant to cafe!), and it was a good reminder to seek out new experiences.

Now here’s a look at how I got artsy in London:

I went to a living room concert

For something that is so popular across the world, I can’t believe I had never heard of Sofar Sounds up until this visit to London!

In case you’ve been living under a rock like I have, Sofar Sounds is a pop-up concert that takes place in people’s living rooms (and sometimes cool venues across the city), where music-lovers can discover local up-and-coming talent.

The catch is that when you sign up for an event through Sofar Sounds, the only information you have is the neighbourhood the event will take place in. That’s it!

It’s not until 24 hours before the event that you are emailed the address and the names of the artists performing that night. And to keep things even more interesting, sometimes they have some big names show up to play in people’s homes. Imagine walking into someone’s living and discovering Ed Sheeran is performing that night? And yes, I’m not making that up, he’s taken part in Sofar Sounds before!

I attended my first Sofar Sounds concert in Camden and on that particular night they had three very unique artists. The first musician was a folk-singer who wooed us with her vocals, then there was an artist who delivered spoken word and raw poems, and that was followed by a band called Hana Brooks who had the whole room cheering and asking for multiple encores.

If you’re looking for unique things to do in the evening in London, this experience is right up there.

In London, Sofar Sounds has 3 nightly events across the city (who knew?!), and you can also find concerts in cities around the world, so it’s something you can sign up for whether you’re travelling or at home.

Next up, let’s talk about art on the city streets.

Most people know about Shoreditch, Brick Lane and Camden Town, but I made my way to East Croydon, which is less than 30 minutes from Central London if you get on at Blackfriars.

After grabbing a quick bite of Brazilian food at Boxpark Croydon – a really cool food market where you can eat your way around the world! – I met up with Kevin, the man behind the RISEgallery. 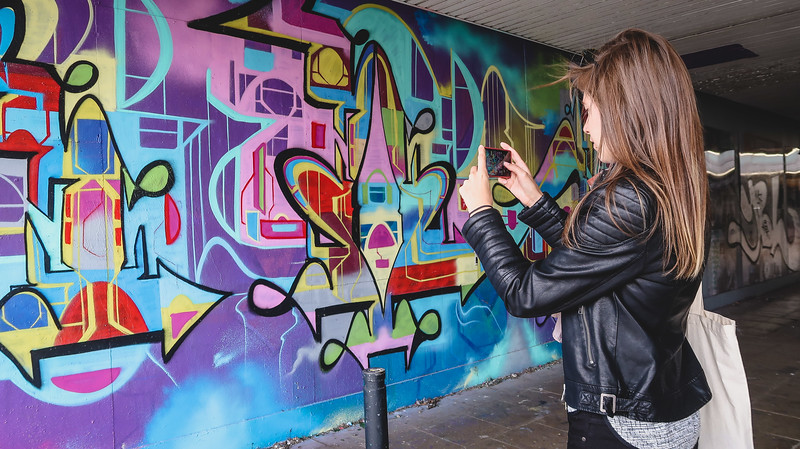 In many ways, the RISEgallery is responsible for the art movement that’s hit East Croydon by storm. They’ve done a lot of the legwork to help connect local artists with local property owners, to create amazing murals.

Over the course of my afternoon wandering Croydon’s streets, I came across numerous pieces telling different stories in different styles – there were portraits of residents and portraits of leaders, city scenes and imagined landscapes, geometric patterns and bubble letters. There was so much variety and you just never knew what you were going to find on the next corner. 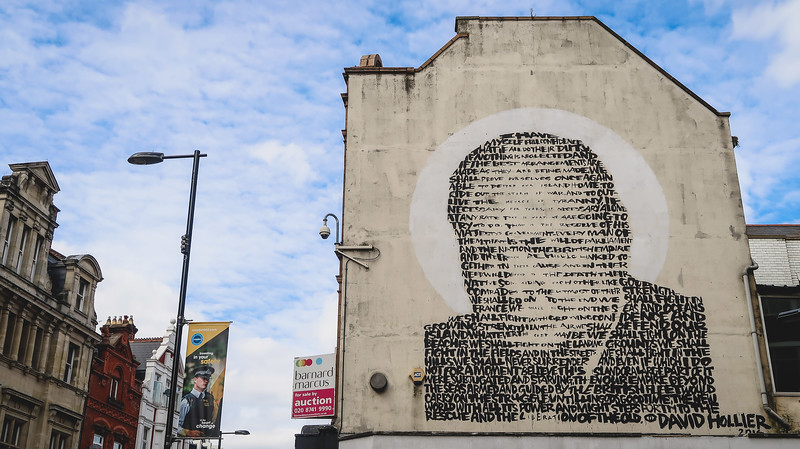 At one point during our walk, we came across a dark alley where all the ACs had been painted in rainbow colours. When I asked Kevin about the story behind this alley, he told me, “Oh, I painted that – I thought the place needed a bit of colour!” Loved it!

Lastly, I should mention that Croydon also has something called the ‘Legal Wall’ where anyone and everyone is allowed to come and dabble in street art – how awesome is that?! On the day I was there, there were 3 different artists collaborating on a piece, which was really cool to see.

I watched a show in London’s West End

Moving on to the theatre, on this visit to London, I attended my first West End show!

I watched Aladdin at the Prince Edward Theatre, whose interior is stunning! Seriously, it’s worth arriving early just to admire the velvet seats, gold trimming and elaborate balconies.

Even though the theatre was mostly full of families with young children – I mean, it is Disney after all! – I really did enjoy the production. My favourite part was when Aladdin ventures down into the cave to retrieve the magic lamp – the set design for that scene was truly amazing!

But even if Disney productions aren’t your thing, you still have plenty of choices in the West End – from Les Miserables to Chicago and The Book of Mormon to Wicked, there’s something for everyone.

I visited an art gallery after hours

The ‘lates’ wasn’t a term I was familiar with, but basically, it’s when museums and art galleries stay open after hours, sometimes simply offering extended admission and other times putting on special events.

I happened to be in town when the Royal Academy of Arts was putting on the last of its summer lates titled The Other Paradise, and well, it was the trippiest thing I’ve ever been to!

For starters, almost everyone in attendance had dressed to match the theme, so you had fairies, forest creatures, and other mythical beings walking down Piccadilly and that pretty much set the theme for the night. Some women were wearing dresses made entirely out of flowers, men had their faces covered in glitter, mermaids and mermen were dragging their tails in hand, and elves and sea monsters were prancing side by side. It was the best thing ever!

Once I was inside the central courtyard, I was met with numerous stations: there was a mermaid drawing class set up inside a yurt, a workshop to make botanical postcards, an area where you could make flower crowns, and a fun photo booth with flamingo props and pineapple hats. Where was I?!

However, the one experience that blew me out of the water was Paradise Lost, an immersive art production that is based on John Milton’s epic poem, which dates back to the 17th-century.

As part of this production, we were taken on a journey to the afterlife, where everyone was sorted into heaven or hell by a spectacled man sitting at a desk. He listened to our story, feigned a bit of emotion, and then off we went to experience eternity in one of two rooms. 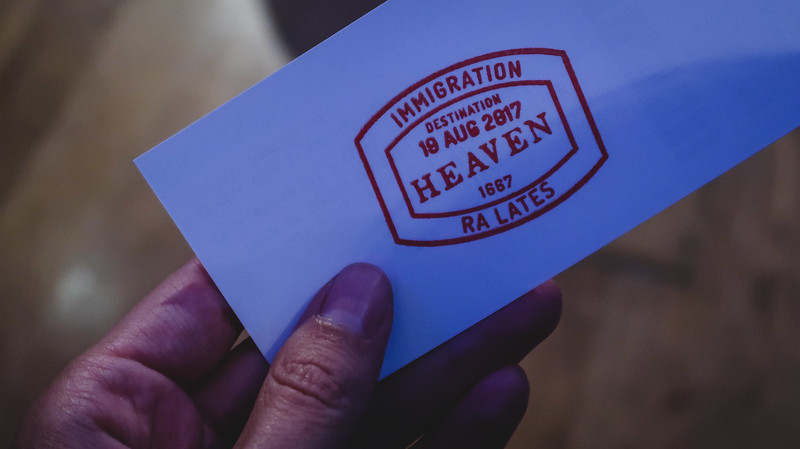 I was sorted into heaven and the first room that my group walked into was covered in white balloons. There, we were welcomed by a joyful angel who asked us to close our eyes, fanned our faces, and then blindfolded one of our recently departed for a waltz.

We then proceeded into another room holdings hands, where there were tables covered in wedding cakes and platters overflowing with fruit. Here we met a host of really fun and sassy angels in party dresses. We watched their discourse unfold, but we were also active members in this production, which was completely unexpected. It was like being on stage with the actors, except we didn’t know what was going to happen next. It was fascinating and I must’ve hung around there for a good 20 minutes before I realized that this chatter was going to continue for all eternity and we were probably only expected to stay as long as we wanted!

From there, I wandered into a secret bar, because guess what? As part of the lates, you can actually wander around the gallery with drinks in hand. It was such a fun night!

Last but not least, let’s talk about modern art. The one thing I always do whenever I’m in London is visit the Tate Modern. This is one of my favourite art galleries in the city, focusing on British art from 1900 to the present day, as well as modern and contemporary art by international artists. Plus the building itself is also rather unusual since it’s set in a former power station! 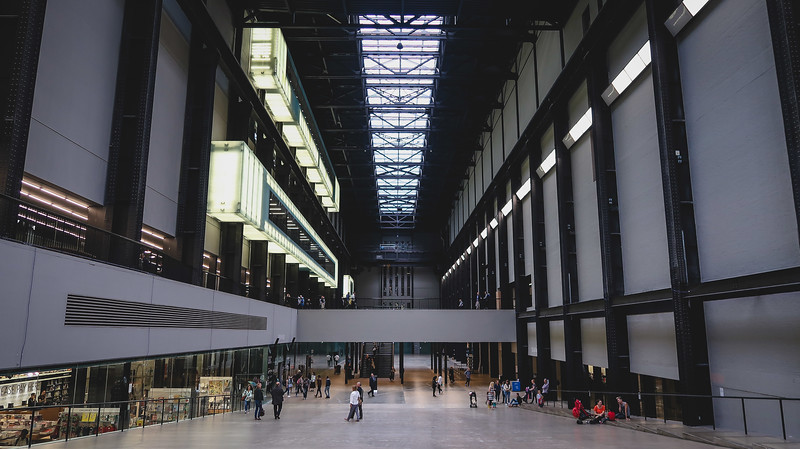 But this time around I wasn’t just visiting for art. The Tate Modern has a new extension, better known as the Blavatnik Building, and this new addition comes with a viewing terrace that offers 360-degree views of London. You can see the River Thames, St Paul’s Cathedral, and as far as Canary Wharf and Wembley Stadium.

The best part? Admission to both the gallery and the viewing terrace is free! So I got to check out some cool art and then see the city from above.

And that’s a little taste of the arts in London. I think it’s fair to say there’s something for everyone whether you enjoy visual art, music, theatre, or street art. So if you too feel like getting artsy in London, I’ll hope you’ll enjoy some of these suggestions!

The trip was brought to you as part of the #lovegreatbritain campaign, created and managed by iambassador in partnership with Visit Britain and Visit London.