Ask anyone for cafe recommendations in Vienna and the first thing you’ll hear is Café Sacher. This place hardly needs an introduction – it’s the most popular cafe in the whole city! – and it also serves what may be the most popular dessert in all of Austria: the Sacher Torte. 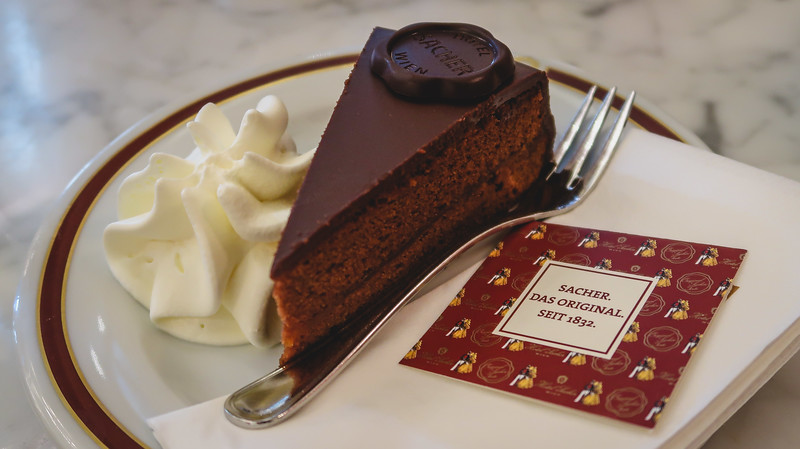 I arrived at Hotel Sacher and immediately joined the queue outside; I thought I could avoid crowds if I ate my cake mid-morning when people would presumably still be full from breakfast, but that wasn’t the case!

However, the line was fast-moving, and it was only a few moments before we were whisked into one of the salons covered in deep red wallpaper, gold-framed paintings, and dangling chandeliers. Fancy!

What is Sacher Torte?

So what is this Sacher Torte that brought me all the way here?

Why, a heavenly dessert for chocolate lovers, of course!

The Sacher Torte is a dense chocolate cake, filled with a thin layer of apricot jam and covered in a dark chocolate icing. At Café Sacher, it is served with a swirl of whipped cream on the side and each slice bears a chocolate seal that reads “Hotel Sacher Wien” in case there was any confusion about where you ended up. 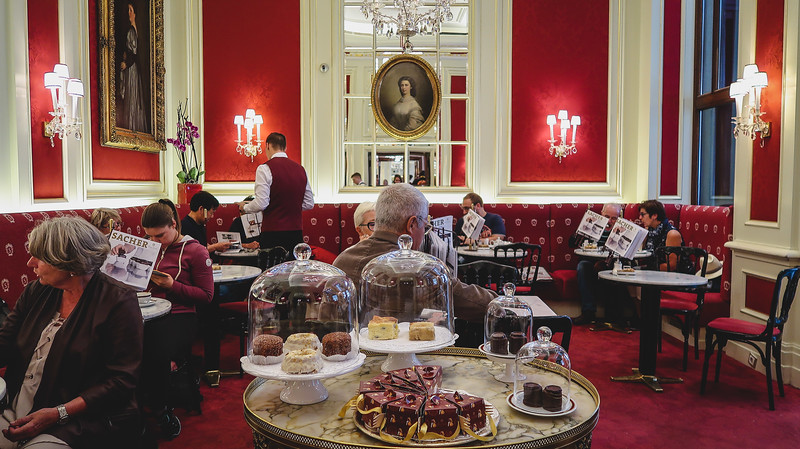 The History of the Original Sacher Torte

And now for a bit of history and cake feuding:

The Sacher Torte was created in 1832 by a young 16-year-old boy by the name of Franz Sacher, who worked in Prince Wenzel von Metternich’s kitchen as an apprentice. The story goes that the Prince had asked his head chef to prepare a dessert to impress some very important guests who would be visiting, but then the head chef fell ill, leaving this grand task to the young apprentice.

Well, Franz Sacher whipped up some magic and the new cake went on to delight both the prince and his guests…and then the cake received no immediate attention. Franz Sacher went on to live in modern-day Bratislava and then Budapest before returning to Vienna where he opened a delikatessen shop.

Eventually, Franz Sacher had a family, and his son, Eduard, trained with the Royal and Imperial Pastry Chef at the Demel Bakery. It was during this time that he perfected his father’s Sacher Torte recipe developing it into its current form. That means the Sacher Torte was first served at Demel, where Eduard worked, and later at the Hotel Sacher, which Eduard opened in 1876; and this is where the legal cake battle begins!

In the 1930s, there arose a disagreement over who was selling “The Original Sacher Torte”. Was it Demel or was it Hotel Sacher? The hotel sued the bakery and this resulted in a drawn-out battle that was eventually resolved in an out of court settlement.

Hotel Sacher won the right to call their cake “The Original Sachertorte” and Demel got to call his cake “Eduard-Sacher-Torte”.

But that’s enough about the history, now let’s eat some cake!

What we ordered at Café Sacher

Seeing as we had come all the way here, we had to order a slice of the Sacher Torte, but we also perused the menu for some new cakes and drinks to sample on the side. In the end, we ordered:

A chocolate cake with a thin layer of apricot jam, covered in dark chocolate icing, with whipped cream on the side.

This Viennese iced chocolate is honestly one of the best drinks I’ve ever had in my life. They didn’t reveal the ingredients that go into making this, but I imagine it takes some decadent scoops of dark chocolate ice cream because the end product was so rich and frothy, I almost felt like I was having a milkshake. The drink was topped with whipped cream and two praline sticks. I could have easily had a second one!

The Viennese Melange is a speciality coffee drink similar to a cappuccino. If you order this anywhere in the city, you should get one shot of espresso topped with steamed milk and milk foam in equal parts, but at Café Sacher, you also get a swirl of whipped cream in your coffee.

“If your heart is weary,
you need more sweets.”
– Anna Sacher 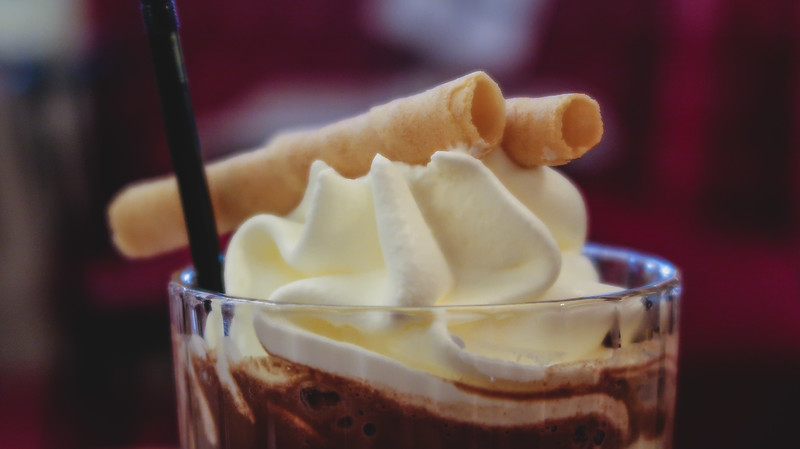 So that’s Café Sacher for you. It’s far from a well-kept secret and you’re almost guaranteed to always find a bit of a line, but sometimes you just have to join the crowds to eat delicious cake. I mean, it just wouldn’t have been a proper trip to Vienna without a slice of Sacher Torte!

If you’re looking for more foodie recommendations, check out some of my favourite places to eat in Vienna.

Have you been to Café Sacher?
What are some other cafes in Vienna you’d recommend?