Sometimes when we travel it’s easy to stick to the capital, but then we end up missing out on gems that are so close by! That’s why today I wanted to highlight two beautiful Finnish seaside towns: Hanko and Ekenäs. These places are charming and the wooden architecture will transport you back to a bygone era, but the best part is that they are easy day trips from Helsinki! Hanko is only a 1,5 hour drive from the capital, and Ekenäs is even closer.

I liked Hanko the minute we pulled into the harbour. The first thing that struck me were the wooden villas. Hanko thrived as a spa town in the early 1900s and this shows in the town’s architecture. Hanko is sprinkled with beautiful homes painted in cheerful pastel colours, and many of the older buildings in the town once served as bath houses, casinos, and dance halls.

Another thing that makes Hanko so special is that it sits on the southernmost tip of Finland – you can’t go any further south from here without dipping your toes in the Baltic Sea. This prime location makes it home to beautiful coastlines, including 30 kilometres worth of sandy beaches.

The town is home to the famous Hanko Regatta which takes place every July. I missed the big sailing race by a few weeks, but I could imagine how the town would come to life during this time. With its lengthy shores, there would be so many places to perch yourself and watch the race unfold.

I arrived in Hanko just in time for lunch so our first stop was Bryggan, a little restaurant on the harbour with one item on the menu: a delicious salmon, dill and potato soup served with a side of rye bread and butter. (You know your restaurant is a winner when you can have one dish on the menu and people still come!) This was followed by a hearty slice of pie as we fuelled up for a day of exploring.

Our first order of the day was to take part in a meditation walk lead by Sattva Wellness. I had never tried anything like it before, so it was an interesting experience. Our guide asked us to remain silent as we soaked in our natural surroundings. She lead us past lily ponds and down forest trails before finally arriving at Plagen, a stretch of beach lined with old-fashioned wooden beach huts. I think the aim of the walk was to disconnect from everything going on around us and to really look inwards as we strolled through nature, but I kept getting distracted by my surroundings and ended up snapping pictures instead…discretely. 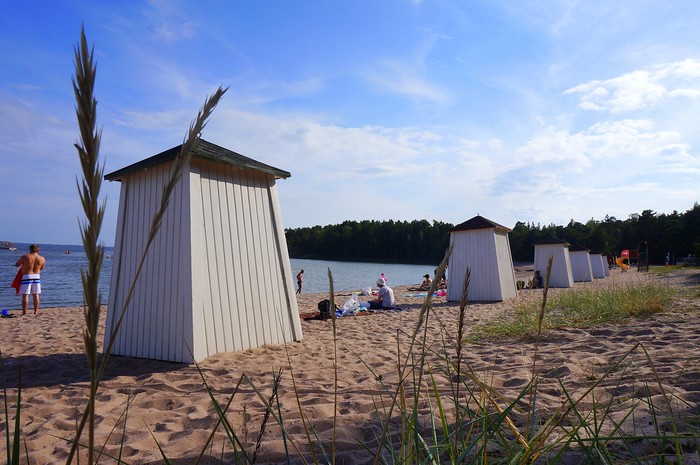 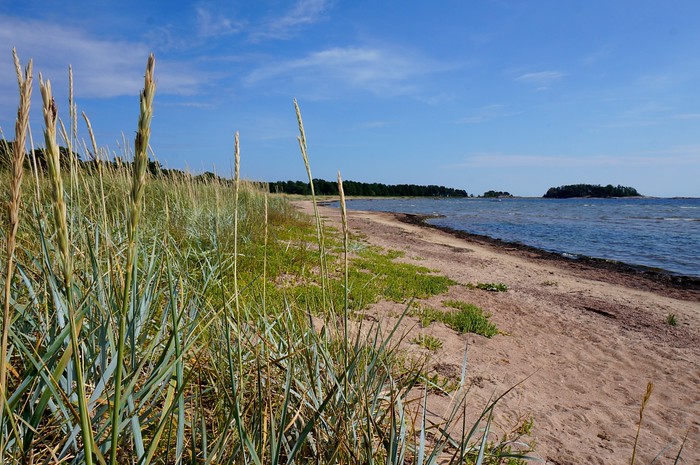 From here we continued on to the Path of Love, a rocky area on the harbour which was the departure point for many Finns seeking a new life abroad. It was on this rocky area that many dances were held as friends and family bid farewell to the 250,000 Finns who left the country between 1881 and 1931 in order to seek a new life in places like Canada, the United States and Australia. I know many Finnish-Canadians back home, so it was interesting to think that many of their predecessors could have begun their journeys in this very spot.

Ready to explore the outskirts of Hanko, we hopped back on our bikes and set out on a cycling tour of Hanko’s local farms. Since we were cooking our own meal that night, we stopped at the Sjöberg Farm to pick up an assortment of organic vegetables. Because it was the last week of summer, no one was working at the farm, but it was cool seeing the ‘honesty system’ in place, so we grabbed our produce and paid by leaving our money in a little box. By the time we arrived back in town we were all famished and ready to dig in! 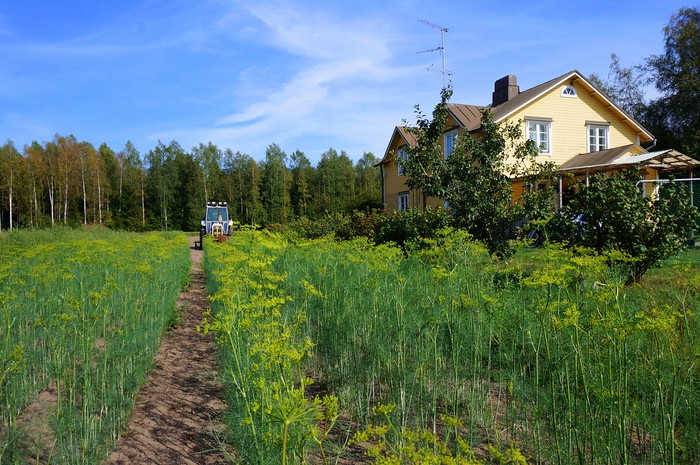 I would have loved to spend a few more days in Hanko – those wooden villas by the sea were just calling out to me for an extended retreat! – but from here we were off to an equally tranquil seaside town.

The town of Ekenäs grew out of a small fishing village, and it has a pretty cool history. Ekenäs was actually founded back in 1546, four years before the capital of Helsinki was even around! Swedish King Gustavus Vasa was the mastermind behind this, and his idea was that both Ekenäs and Helsinki would compete for trade with the port city that is today known as Tallinn. Unfortunately, things didn’t go exactly as the king had planned and the town remained a quiet village for almost 200 years.

While Ekenäs may not have become the booming city Gustavus had hoped for, it did manage to retain its history, which makes it a great place to wander around. The Old Town is a medieval maze of crooked lanes, and many of the street corners are still marked with images of fish and sea creatures, a method that was used to name and divided the town’s quarters in the 19th century.

I spent part of the morning on a do-it-yourself architectural walk of the medieval town. The tourism office puts out little brochures with maps of the Old Town, and you can use these to wander around and pinpoint the various architectural styles found there ranging from Neo-Classical to Art Nouveau. 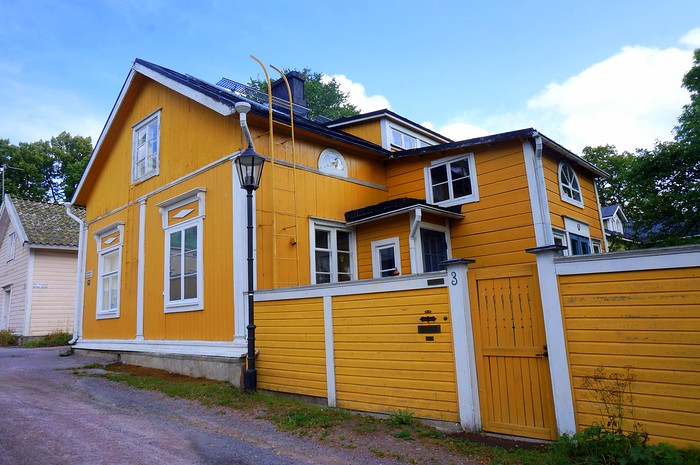 I also got to try a new activity during my visit: paddleboarding! While the sport has only become popular in recent years, our instructor explained that it originated around the same time surfing became popular in the 60s and 70s. Surfing instructors needed a way to be out on the water observing their students, and thus paddleboarding was born out of necessity. The sport turned out to be a lot of fun, and the best part? I didn’t fall in! 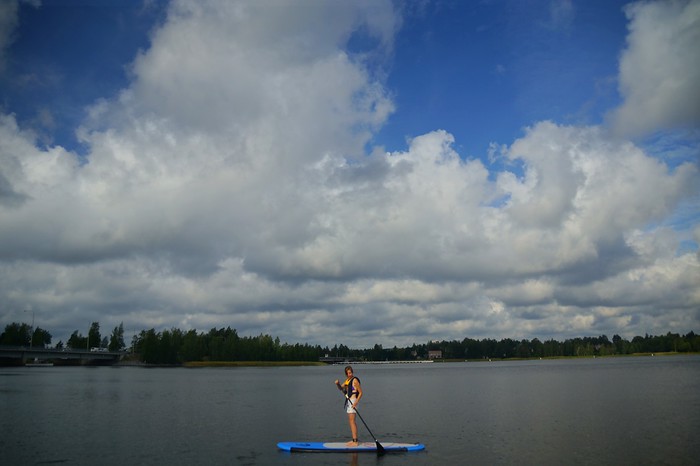 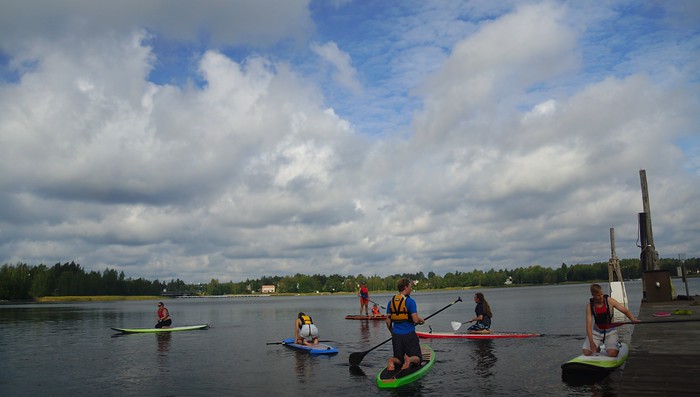 And that’s a little glimpse at Hanko and Ekenäs. I wish I had more to share, but my visits were all too brief! Maybe that’s something that you can take away; even though these two towns are easy day trips from Helsinki, there’s still plenty of reason to linger for a few more days and really soak in everything these places have to offer!