While there are plenty of sights and activities to keep you busy in Prague, a trip to the city should definitely include a few excursions to the surrounding region. From charming towns to quaint villages, and medieval castles to breweries, there’s plenty to see and do just a short ride from the capital, so make sure you get away and enjoy some of these amazing day trips from Prague. 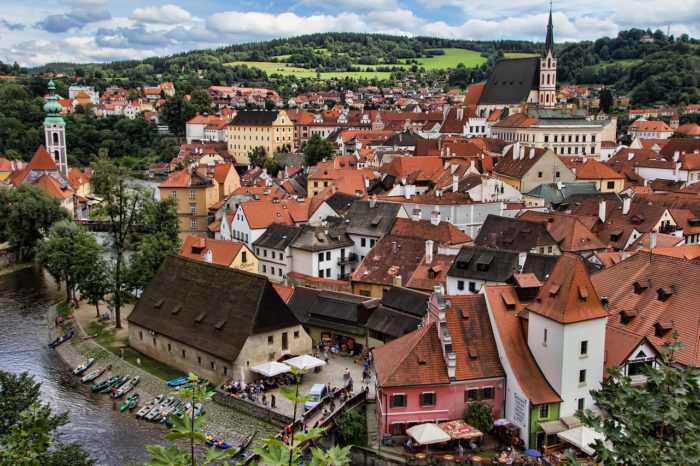 While it’s definitely worth more than a day trip, the historic city of Cesky Krumlov is a must see when you come to the Czech Republic. If you’re only going to be staying in Prague, make sure you plan a day trip to explore the castle and wander down the tiny little side streets.

The castle complex is UNESCO heritage listed and the orange roofs make it seriously picturesque. Wander through the old town to take in the Renaissance and Baroque architecture. The city is overflowing with great Czech restaurants and is known among the backpacking crowd as being a great night out.

Kutna Hora is a quick and easy day trip from Prague. The city is only an hour away by train and you can get there for roughly 100 CZK each way.

Kutna Hora is an ancient silver mining town and is also listed as a UNESCO World Heritage site. St. Barbara’s Church is full of unique and beautiful paintings and the eerie Sedlec Ossuary is a church that has been decorated with human skulls. If you have time, the Czech Museum of Silver is also here and you can take a look at some of the old, underground mines.

The Karlstejn Castle is one of the most photographed castles in the Czech Republic. You can get a direct train to the town of Karlstejn from Prague’s main station. It takes roughly 40 minutes to get there. You can also book a tour from Prague that includes a guide. This is a great option if you want to learn more about the history of the town and about the previous residents of the castle. Just make sure you don’t plan to visit on a Monday when the castle is closed to the public.

There are two areas of the castle you can visit, but if you want to visit both you’ll have to buy two separate tickets. There is the area where you can explore the private rooms of Emperor Charles IV or the side of the castle where you’ll find the sacred rooms and Chapel of the Holy Cross. Both take roughly an hour and a half to explore.

There are three different UNESCO sites in Vysočina located in the towns of Telč, Třebíč, and Žďár. Telč is a small town that is surrounded on all sides by lakes and ponds; here you’ll find Baroque and Renaissance architecture around every corner. Třebíč is famous for its Jewish Quarter and the basilica, both of which date back to the 13th century. Lastly, there’s Žďár which is great for hiking or biking around the hills of Vysočina.

The best way to see this region in a day is to rent a car. You can also take a train to the different areas from Prague’s main station, but you’ll likely only be able to visit one site a day if you go by train.

Another popular day trip from Prague is Karlovy Vary, since there are both direct buses and trains from Prague. Buses only take two hours, but you’ll have to leave pretty early. Trains take three hours but give you more flexibility with when you leave and return to Prague.

The main reason to head to Karlovy Vary is for the hot springs. Karlovy Vary actually means Charles’ bath after Emperor Charles IV who founded the city back in the 14th century. There are 12 hot springs in total, with Geyser Collonade – Vridlo being one of the few that you can visit for free. If you want to enjoy a spa treatment while you’re in Karlovy Vary, just beware that most hotels and spas only offer programs with a minimum stay of one week.

The border with Germany is incredibly close to Prague. It is less than two hours by train from Prague’s main station to central Dresden. If you want to check out another country and culture on your trip to Prague, then this is a must.

While you’re there, you can explore Dresden Castle, see the ornate Semperoper Opera House, and walk around the gardens at Zwinger Palace. If it’s a sunny day, you should definitely get out on the River Elbe to soak in the sunshine and see the city from a different angle. There’s a fun afternoon steamboat tour that includes all the coffee and German cake that you can handle.

This is a must for beer lovers! You can easily reach the town of Pilsen on a day trip from Prague. The train takes just over an hour and a half and then from the station it’s a ten-minute walk to the brewery. Be sure to book your tour in advance so that you don’t miss out on one of the three English tours each day. It costs about 200 CZK and lasts about 2 hours.

The tour of the brewery will take you through the history of the company as well as the beer making process. You’ll get to see where this world famous beer gets made and at the end, you can enjoy samples of unfiltered and unpasteurized Pilsner Urquell.

Terezin Concentration Camp, sometimes called by its German name, Theresienstadt, is the site of an SS concentration camp that was used during World War II. It’s in the town of Terezin, which was part of German-occupied Czechoslovakia.

It’s an eery and sombre place, but an important one if you want to learn more about the German occupation of this region during World War II and pay respects to the thousands of people who lost their lives here.

Tábor offers visitors a cool medieval experience. You can take the bus from Prague, which is the quickest way to get there, or you can opt for the train which, though it takes longer, is a more comfortable journey.

Head to the Old Town Hall to learn more about the Czech Hussites who founded the town during the Middle Ages; tour guides claim this is the most important Gothic building in the Czech Republic! Beneath the Town Hall is a network of tunnels that weave their way under the main square. For the best view of the city, climb up to the top of the church tower.

Olomouc is a city in the eastern part of the country, and like a lot of cities in the Czech Republic, it sits along a River. Something really unique about Olomouc is that it’s located on top of an old Roman fort that dates back to the 2nd century.

Be sure to stop into the Archbishop’s Palace, the Arcidiecezni Museum, and the main square which is surrounded by tons of colourful buildings.

The train takes roughly two and a half hours from Prague’s main station, making it another easy day trip from Prague to add to your list.

Have you taken any other day trips from Prague?
What places would you recommend visiting?