No matter where I go, I always like to dive right into the local cuisine and in Tyrol, it was no different. The foodie in me was curious to see what Tyrolean food was like, so in between exploring the mountains and valleys and attending a cow parade, I made it my personal mission to order as many traditional Tyrolean dishes as possible, and let me tell you, it was goooood! So without further delay, here are 10 mouthwatering dishes you need to try in Tyrol, Austria!

Let’s start with Käsespätzle, or as they call it in Tyrol, Kasspatzln.

This dish consists of soft egg noodles mixed with grated cheese and sprinkled with crispy fried onions on top.

Kasspatzln is oftentimes served in the same pan it was cooked it, and when it arrives at the table, the noodles are coated in melted cheese that stretches into strings as you try to take a bite.

It’s such a popular dish that you’ll find it is served in restaurants as well as out-of-the-way mountain huts – because people expect their Kasspatzln after a long day of hiking, what else!

This was my personal favourite Tyrolean dish and I guarantee it won’t disappoint your taste buds. 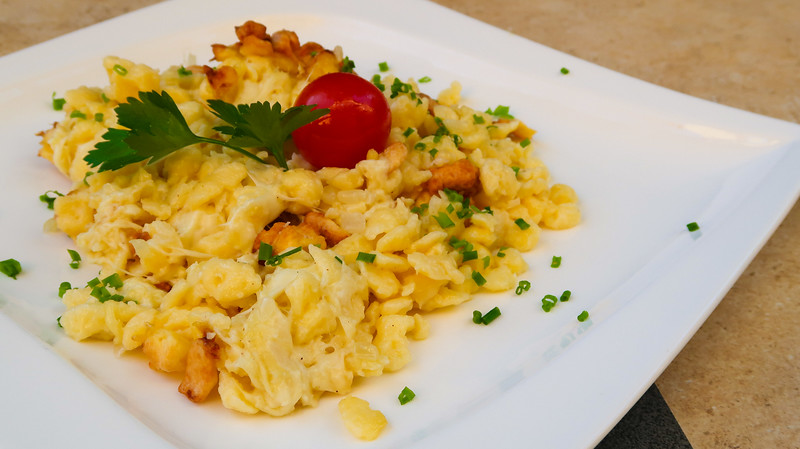 Another dish I tried in Tyrol was the Tiroler Gröstl, sometimes just called, Gröstl.

This is yet another hearty dish that you can enjoy after an active day hiking or skiing in the Alps.

Tiroler Gröstl is a potato, onion, and bacon fry up. Everything is fried until golden, sprinkled with chopped parsley, and then served with a fried egg on top. It’s a simple recipe, but it’s delicious!

This is a very filling dish, so if you’re really hungry, you can order it as a main, or you can get it as a side to share with your group at the table.

Another popular dish in Tyrolean cuisine is the Tiroler Speckknödel.

This is a large, round, boiled, bread dumpling that has little pieces of bacon. It may not fit your idea of a dumpling as it’s really the size of a fist, but it’s another tasty dish to try in Tyrol. I’ll admit that I didn’t think this looked very appetizing the first time I ordered it, but as soon as I took a bite, I was sold!

The Speckknödel can be served with a light broth or with a side of Sauerkraut – whatever you prefer!

This is another popular choice in the mountain huts.

This next dish bears some similarities to the Tiroler Speckknödel I just mentioned.

These pancakes are cooked in butter until golden brown and then served in a broth or with a side of coleslaw. Another filling dish to add to your list of foods to eat in Tyrol!

While travelling in Tyrol, I also tried the Zillertaler Krapfen.

The best way to describe this dish is that it reminded me of the Tyrolean version of a South American empanada.

Zillertaler Krapfen consists of thin layers of dough that are stuffed with a potato, cheese (you need to use Graukäse) and chive filling. They are then folded into semicircular parcels and fried in oil.

This dish is a tradition from the Zillertal Valley and it’s often served during festivals.

Wild game makes frequent appearances on menus around Tyrol, so another dish I decided to try was Hirschfleisch or deer meat.

I got the deer escalope stuffed with mushrooms, bacon and onions, which was accompanied by Rotkraut (red sauerkraut), Spätzle, and a cranberry sauce.

I’ve only tried deer meat a few select times, once in Canada and once in Scotland, but I was very impressed by this meal. It was very tender, and it did not have a strong gamey flavour, but rather took on the flavour of the sauce it was cooked in. It was hearty and filling, and very recommendable.

Marend is more of an assorted snack spread than a single dish.

Back in the day, this used to be the meal of choice for farmers and shepherds who spent their days working in the mountains, but today, it has evolved into more of a social occasion that brings family and friends together.

Marend is a casual snack usually served on a wooden block, and it includes a mix of mountain cheeses, cured meats, sausages, lard spreads and bread. Perfect for snacking and socializing!

It can be enjoyed with schnapps, beer or wine. 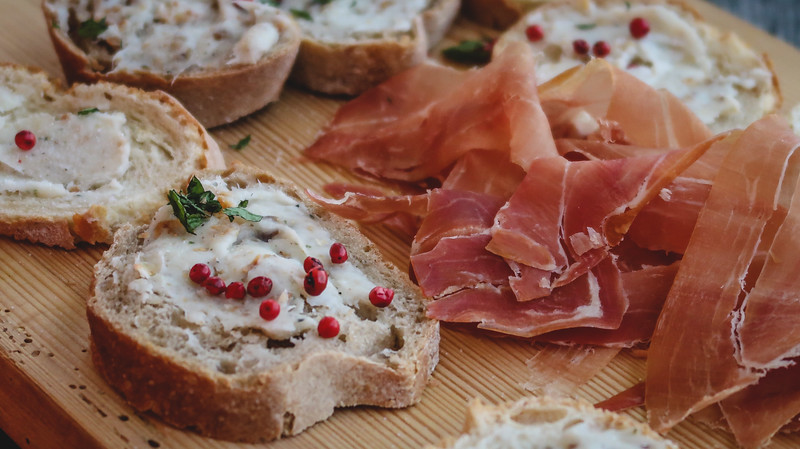 Now moving on to desserts, one that I particularly enjoyed is Prügeltorte.

This is a type of cake that isn’t cooked in an oven, but rather a spinning cylinder!

The batter consists of eggs, butter, sugar, flour, a pinch of salt and lemon zest. Once the batter is ready, it’s spread on a spinning cylinder which slowly cooks the cake over a fire.

Layers are added one at a time until the cake is about 1.5-2 centimetres in thickness. Once ready, the cake slides off the cylinder and the rings are filled with cream and a berry sauce.

Half the fun is watching the dessert be prepared right before your eyes! 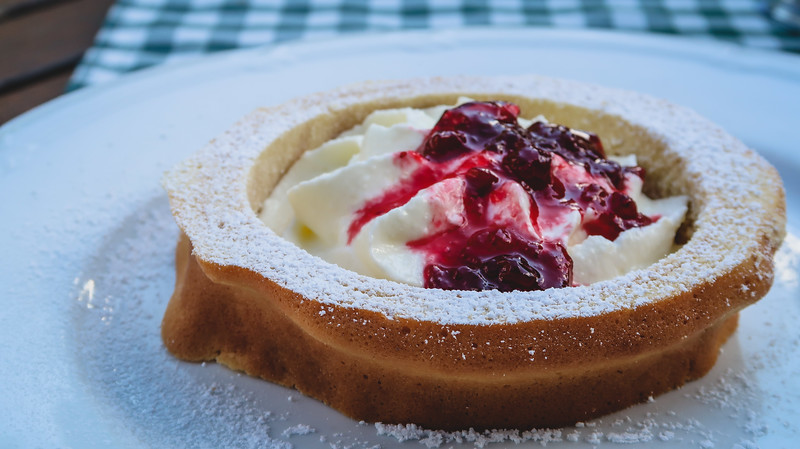 Another dessert not to be missed in Tyrol is Kaiserschmarren.

Technically, you can find this dish outside of Tyrol, but it’s very popular here, especially in the mountain huts.

The dish is basically a scrambled pancake; while the pancake is cooking, it’s broken apart with the use of two forks, and then it’s served with a dusting of icing sugar and a fruit sauce.

Fun fact: Kaiserschmarren is named after the Austrian Emperor, Kaiser Franz Joseph I, who loved this dish and also vacationed in Tyrol.

Dessertteller simply means “dessert plate”, and one of my favourite Tyrolean desserts was this assorted platter which had a selection of some of the most popular sweets in the region.

I paired this with a cup of coffee and a shot of apricot schnapps, and let me tell you, it was divine!

Lastly, a food tip for Tyrol: if you see a restaurant has a Tiroler Wirtshaus (Tyrolean Inn) logo, that means the establishment serves dishes with locally grown produce, and that it is also owner-operated. There are over 130 restaurants in Tyrol that have this brandishing and that’s one way to find the freshest and tastiest food in Tyrol. Guten Appetit!

Have you visited Tyrol?
What are some of your favourite Tyrolean dishes?