Germany may not be the first country that comes to mind when you think of a seaside holiday destination, but that’s exactly what I discovered during my recent visit to Ruegen Island. Located in the state of Mecklenburg-Western Pomerania, Ruegen Island is Germany‘s largest island and it draws holidayers for a lot more than just its beaches. During my visit, I got to hike along chalky cliffs, watch live outdoor theatre, ride in some unique modes of transportation, and drive the island’s “tree tunnels” – beautiful stretches of road covered in a thick foliage of trees. Here’s a little recap of what that looked like: 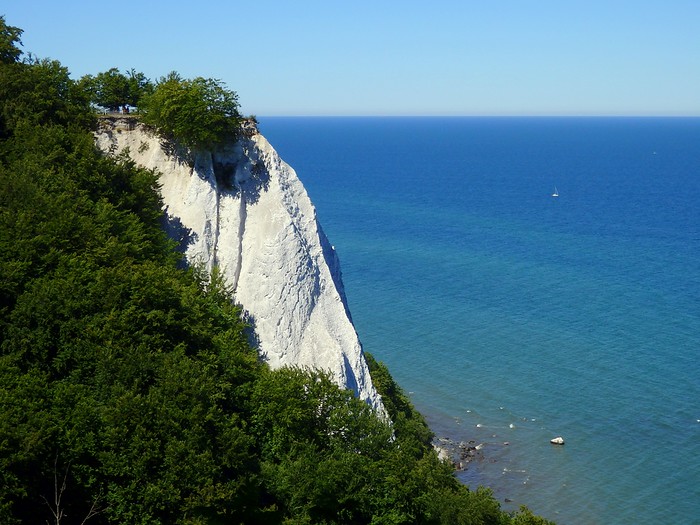 When it comes to natural wonders, Ruegen Island does not disappoint. Located on the northeastern tip of the island, you’ll find Jasmund National Park, a place where the white chalk coastline tries to play tricks with your eyes. Can it be? Is it real?

If you’ve ever visited the Cliffs of Dover in England, or Møns Klint in Denmark, then you’ll know exactly what I’m talking about. These white chalk cliffs rise up along the coastline and make for one of the most beautiful sights you’ll ever witness. As it turns out, England and Denmark aren’t the only places where you can see this marvel – Germany’s Ruegen Island has just as spectacular a coastline.

The two main lookout points in Jasmund National Park are Koenigsstuhl, which translates to King’s Chair, and Victoria-Sicht, which means Victoria’s View. The walk to Victoria’s View makes for a nice stroll through the forest, and then there’s also a turnoff where you can walk down to the pebbly beach below so you can enjoy the cliffs from a different vantage point.

Watching a medieval play at the Stoertebeker Festspiele

If you ever visit Ruegen Island in the summertime, you won’t be able to drive more than a few hundred meters without seeing posters of a handsome young man, dressed in medieval clothes, with blond locks flowing down to his shoulders. These posters advertise the Stoertebeker Festspiele, which is an open air theatre that takes places on a massive outdoor stage right by the water.

The play is set in the medieval period and it includes something for all ages – love, betrayal, sword fights, and even a few explosions. The story and the characters change every summer, and that’s one of the reasons people keep coming back for more. And that’s the other thing, people flock to this event by the thousands! I was shocked when I saw the number of seats (over 8000!) available and I wondered if they’d be able to fill them considering the size of the towns and villages on the island, however, the Stoertebeker Festspiele is such a well-known event that visitors make the drive not just from around the island, but also from the surrounding mainland.

The play was in German so we didn’t quite follow the whole storyline, but the sword fights and the pub brawl kept us entertained.

Also, as a tip, if you ever find yourself in Ruegen and plan to attend this festival, bring a blanket and hoodie to keep warm. The summer nights can get quite chilly and I kept wishing I’d worn something warmer the whole performance. 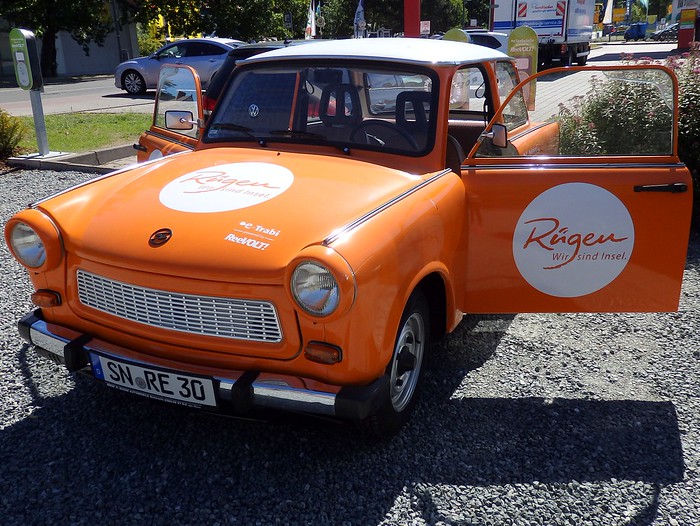 Riding in a Trabi from the former GDR

Having minored in German Studies when I was in university, I spent several weeks studying Ostalgie, a unit that covered the nostalgia for East Germany that developed years after the wall came down.

One of the unique aspects of East German culture was the cars they drove, or I should say ‘car’ because almost everyone had a Trabant. This was a car that you had to wait about 15 years to receive and it was also known to be one of the least reliable cars out there. They were constantly breaking down and people were always having to find creative ways to repair them.

Once the wall came down and East Germany and West Germany were once again reunified, most East Germans sought to upgrade their vehicles. The Trabant was considered a thing of the past, that is until Ostalgie kicked in. It wasn’t too long before some East Germans started longing for the things of the past, items that were only available in the former German Democratic Republic, which was now quickly becoming more and more Westernized. The Trabant, affectionately known as the Trabi, suddenly saw a resurgence in popularity. It became a car that people wanted to drive and you can still see in on the streets today 25 years after reunification.

And that’s why I was so excited to get to ride in a bright orange Trabi while I was in Ruegen Island! This old Trabi had been converted into an eTrabi with an electric engine, and even though I wasn’t the driver, it was still a lot of fun riding in one simply because of all the history behind the car.

Travelling aboard the Rasender Roland

I know I’m sounding like a total transportation enthusiast here, but indulge me a little, will you? Now I’m going to tell you about a really cool train because if you ever find yourself in Ruegen Island you won’t want to miss riding the Rasender Roland. This is an old fashioned steam engine train that runs between Putbus and Goehren.

For many locals this was once a commuter train to travel between the towns along the southern part of the island, these days, however, the route has gained a lot of popularity with vacationing tourists who want to ride along this scenic route. The tracks run past farms and wooded areas, and it’s a slow and easy ride for all ages.

An alternative if you prefer something a bit more active is to hike the path through the woods that runs along the train tracks. That way you still get to enjoy nature and see the steam engine train in action.

A local was later telling me that sometimes there are special music events put on where you ride the train to the forest, people bring their picnic baskets, and then when you arrive, musicians are already playing live music. Could there by anything more idyllic than that?

Ruegen Island wouldn’t be considered a summer destination if it didn’t have beaches, and the seaside town of Goehren offers precisely that. I only had half a day in the town, so I can’t give you the full scoop on all the sights, but I can tell you that it has a nice seaside promenade with some lovely stretches of sand. (The place reminded me of some of the Baltic seaside towns that I visited in Finland last summer!)

One of the things I found most interesting about the beaches was seeing the Strandkorben (double beach chairs that offer a little cover from the wind). Prior to visiting the northern parts of Germany, my mom who used to live in Hamburg, had told me about windy summers by the Baltic Sea – summers that involved sitting in a Strandkorb, bringing a book down to the beach, and perhaps even draping a blanket over your legs while you stared out at the sea.

Well, I happened to be visiting during an unusual heat wave so blankets were not necessary, but it was still cool seeing the Strandkorben all lined up on the sand.

Where to stay in Ruegen Island

While in Ruegen Island I stayed at , which offers really unique accommodations in the form of apartments built on stilts over the water. It was pretty cool falling asleep with the moonlight streaming in through the windows, and simultaneously hearing the sound of the water lapping against the pier and the sailboats in the harbour.

Have you visited the Baltic Sea in the summertime?
Any favourite destinations to share?

This trip was planned in partnership with the German National Tourism Board as part of their #JoinGermanTradition campaign which seeks to highlight unique customs and traditions across Germany. 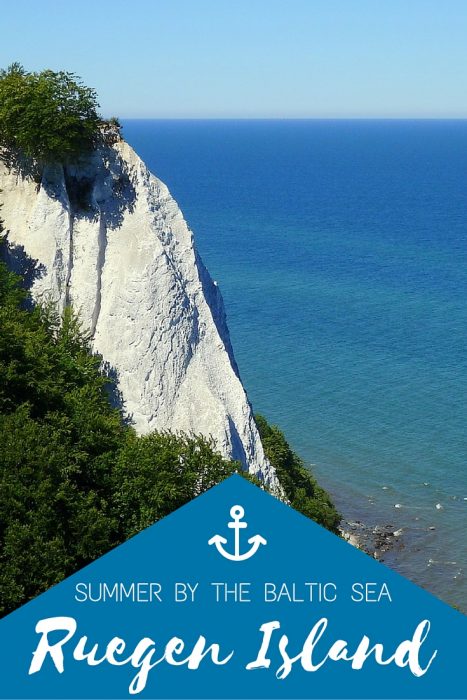