One of the best things we did during our stay in Osaka was to go on a day trip to Nara. Once the capital of Japan, from the years 710 to 784, Nara is home to temples, shrines and beautiful gardens, but its main claim to fame are the resident deer who roam the streets, bow for treats, and amuse visitors.

This destination is hardly a well-kept secret and you are guaranteed to find crowds around the main sights, but don’t let that deter you from visiting. There’s something magical about Nara and it truly was one of the highlights of our Japan trip.

How to get to Nara

Nara is an easy day trip from Osaka and Kyoto with multiple train options to get you there.

You can find more detailed information with travel times and prices here.

Things to do in Nara

Let’s start with Nara Park since this is where many of the city’s attractions are located and where you’re most likely to do your sightseeing.

Nara Park was established in 1880, making it one of the oldest parks in Japan, and it covers a total of 660 hectares, meaning there’s a lot to explore.

Within this public park, you’ll find temples, shrines, museums, and walking trails. The park also happens to be home to around 1200 sika deer who roam freely, but we’ll get to the deer in a bit.

For now, know that admission to the park is free, though you’ll have to pay for a few select attractions within the park grounds.

The main attraction in Nara Park is Todai-ji Temple, which was once the world’s largest wooden building. And as though that weren’t impressive enough, this temple also happens to house the largest bronze statue of a Buddha. Imagine that!

It takes a few moments for your eyes to adjust when you first walk into the temple, as it’s quite dark in there, but then you’re met with this giant bronze statue that stands 15 meters tall and dates back to 752. Fun fact: they’ve taken x-rays of this statue and there are treasures hidden within it!

Aside from Todai-ji, we only visited a handful of shrines scattered through the city, but if you’re up for a temple-hopping adventure on your day trip to Nara, here are a few to consider:

Now for what may be the best-kept secret in Nara, I present to you: Yoshiki-en Garden!

This place wasn’t even on our Nara travel itinerary. We found it completely by chance on our way to Isuien Garden and what really caught our attention was the sign offering free admission to foreign visitors.

It would appear that this place isn’t well-known to international travellers (it certainly wasn’t listed on any guidebooks or blog posts that we read prior to our visit!), because when we reached the ticketing booth, the attendant was quite curious to know how we had found this place (online, from the tourist office, a local’s recommendation).

Well, it didn’t take us long to realize that we had stumbled somewhere pretty special. The Yoshiki-en Garden was built on the site of Kofuku-ji Temple’s former priest residences, and it lived up to the image of Japan I had dreamt up in my head.

The garden itself was divided into three different sections: the Pond Garden, the Moss Garden and the Flower Garden. Since we visited in summer, everything looked so lush and green, and smelled incredibly fresh. We followed the trail through all three gardens ooh-ing and ahh-ing at every turn. For me, this garden alone was worth the day trip to Nara!

Feeding the bowing deer of Nara

Now let’s talk about the main draw to Nara: the deer!

Nara’s deer hold a very special status in the city. Local folklore has it that Takemikazuchi, the god of thunder, once appeared on Mount Wakakusa (just up the hill from Nara Park) riding a white deer, and thus the deer inhabiting the surrounding forest were deemed sacred messengers of the gods.

Up until 1637, harming a deer was considered a capital offence punishable by death, but after WWII their sacred status was removed, and today they are seen as a national treasure.

The quickest way to befriend the deer is with treats, and thankfully there are lots of licensed vendors selling crackers specifically made for the deer. These are called ‘shika senbei’ and you can get them for ¥150.

Be warned that the deer can sniff out those crackers whether you stuff them in your pockets or hide them in your bag, so once you have them in hand, prepare for a herd of deer to approach.

The deer are pretty good about bowing – Sam bowed in front of them a few times and then they started doing it too – but I will say that as tame as they are, they can be quite persistent and nip if you’re not feeding them fast enough.

A big highlight of our day trip to Nara was all the street food we got to sample! We did most of our eating around Kintetsu-Nara Station, visiting several shops along Higashimuki Shopping Street, which is a covered pedestrian street, plus we also picked up a few snacks in Nara Park.

If you too are looking to get a taste of Nara, here are some of the street food items we’d recommend:

For the performance of a lifetime, you need to get freshly-pounded mochi at Nakatanidou. Men pound the green mochi right before your eyes using fists and big wooden hammers and it’s a complete spectacle.

Contrary to popular belief, this mochi is not matcha flavoured but gets its green colour from mugwort. It is then stuffed with azuki beans and rolled in roasted soy powder.

The mochi was served warm and it was very soft and light. This was hands down the best mochi we tried in all of Japan!

Another street food item unique to Nara is sushi wrapped in persimmon leaves, which is placed in a wooden box and left to ferment a few days. I know this probably doesn’t sound very appetizing, but I assure you, it is!

This tradition of fermented sushi is one that dates back to the times before refrigerators were around, and it was a popular snack to enjoy during the summer festivals. The original recipe calls for salted mackerel, but these days there’s a greater variety like eel, red snapper and salmon.

We got a mixed box set with both mackerel and salmon and had a little picnic. You can buy these sushi boxes at Kakinohazushi Hiraso Todaiji just outside the train station.

Once you enter Nara Park, you’ll notice a few deer-themed snacks for visitors, including deer poop! These are chocolate covered peanuts, and it’s easy to see how they get their name. If you’re looking for a fun souvenir to take back home for friends, this one will probably get a few giggles.

Another sweet treat that we enjoyed in Nara Park was soft-serve ice cream. They had some seasonal flavours to choose from like sakura and white peach, as well as the classics like matcha, vanilla, strawberry, and chocolate.

I wasn’t too sure about the sakura ice cream (what do cherry blossoms taste like, anyway?), but it was surprisingly sweet with a light floral aroma. Definitely worth trying!

During our visit to Nara, we also tried stuffed red bean pancakes which are known as dorayaki. The pancakes were very light and fluffy, and we also noticed they had some different fillings like chestnut and sweet potato.

We visited Nara just a few days after arriving in Osaka, so we hadn’t had our fill of takoyaki yet. These are ball-shaped pancakes filled with octopus, pickled ginger, tempura and green onion. They are topped with a special sauce that tastes a lot like BBQ sauce, then drizzled with mayo, and sprinkled with bonito flakes.

And of course, we filmed it all, so if you want to see all the sights we visited, the deer we encountered, and the street food we sampled, it’s all here:

Should you stay overnight in Nara?

We tried to see as much as we could in a day, but Nara Park is massive and we barely scratched the surface in terms of temples, shrines and hiking trails.

If we’d had more time and we’d known how much there was to see, we could have easily allotted 2-3 days. This destination would make the perfect weekend escape or romantic getaway.

If you do decide to stay overnight, Nara has a mix of hostels, hotels and ryokans – the latter is worth experiencing at least once during your travels in Japan! 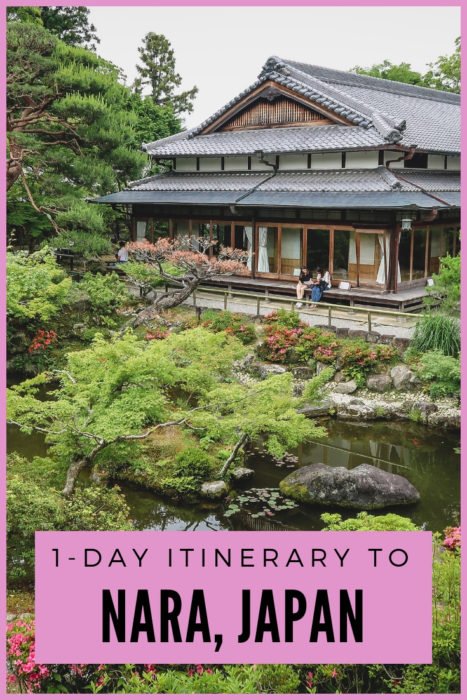 Have you visited Nara?
What else would you add to this Nara travel itinerary?