We went on a few different day trips from Tokyo over the course of our month-long stay in the city; there was Mount Takao in search of nature, Yokohama for street food, Odaiba for robots, and then Kamakura.

Nicknamed ‘the Kyoto of the East’, Kamakura is a coastal city famed for its many shrines and temples, so that’s exactly what we prioritized during our visit: a whole lot of temple hopping and some street food to keep us going!

Here’s a little taste of what we got up to on our day trip to Kamakura. 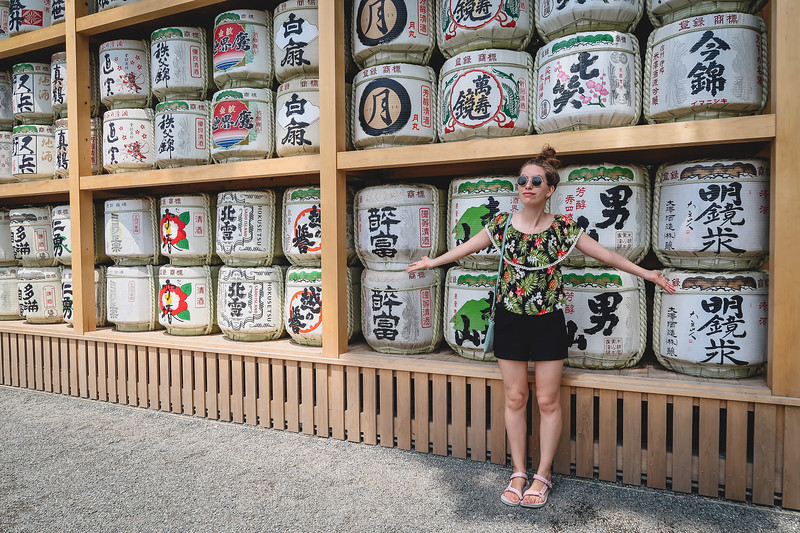 Getting to Kamakura from Tokyo

There are a few different ways to get from Tokyo to Kamakura.

We took the Shonan-Shinjuku Line departing from Shinjuku Station and arriving at Kamakura.

Visiting temples and shrines in Kamakura

There are plenty of shrines and temples to visit in Kamakura, but since we were only visiting on a day trip, we decided to focus on just 3:

The first place we visited was Tsurugaoka Hachiman-gū, a Shinto shrine that was just a short walk from the train station.

The original shrine was built in the year 1063 (yes, almost a thousand years ago!), though, of course, it has been expanded and restored since then. This shrine is dedicated to Hachiman, the god of war, and the patron god of samurais.

This shrine had beautiful grounds, we walked through a red torii gate at the entrance, strolled along the ponds, saw a wall of sake offerings, and then climbed the steps to the main shrine within the grounds.

The temple was busy, especially with school groups who were visiting for the day, but it had little pockets of tranquillity.

From there, we backtracked to the train station and hopped on the Enoden Railway Line and travelled 3 stops over to Hase to visit Kotoku-in. 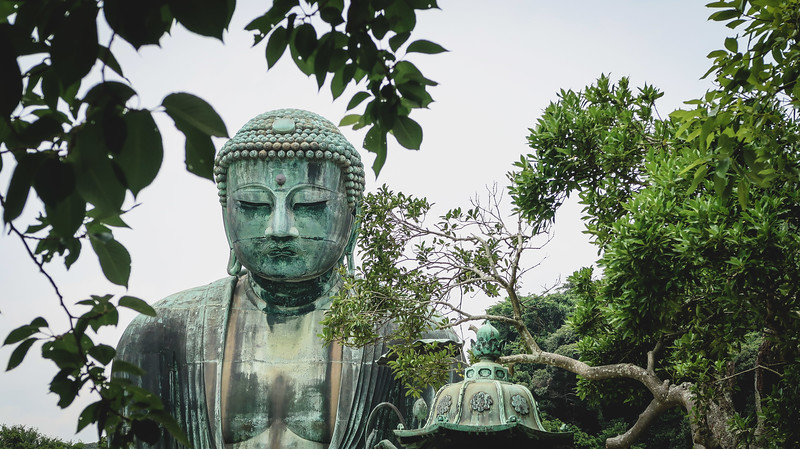 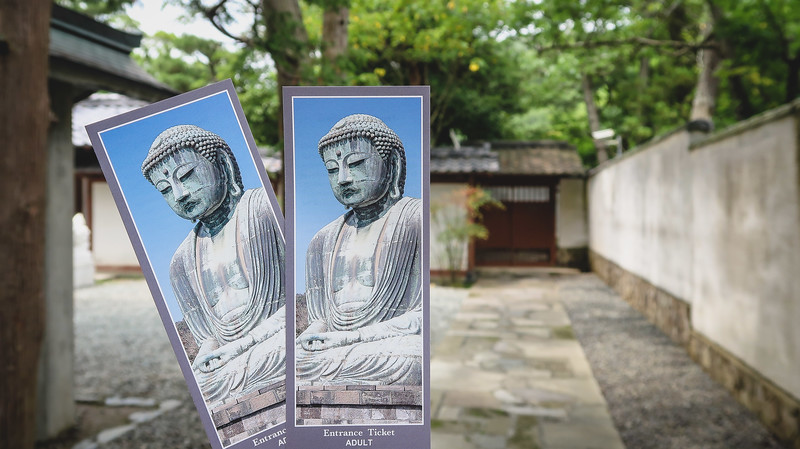 This temple is home to the second-largest Buddha in all of Japan which stands 11.4 meters tall (the largest is found in Nara).

The bronze Buddha is believed to date back to 1252 and it was preceded by a wooden Buddha. The Buddha was originally housed inside a temple, but that was destroyed by multiple typhoons and tidal waves, so it’s been in the open air since the late 15th century.

The bronze Buddha is hollow inside and it’s open to visitors, however, since we visited over the summer on a day of sweltering heat, setting foot inside the statue didn’t seem all that appealing!

The last temple we visited in Kamakura was Hasedera, which is another Buddhist temple.

We happened to visit when the hydrangeas were in bloom and there were very long queues to view them. Visitors were assigned numbers and admitted in groups, but since we’re not ones to wait patiently in line for hours on end, we skipped the hydrangeas and explored the temple grounds instead. 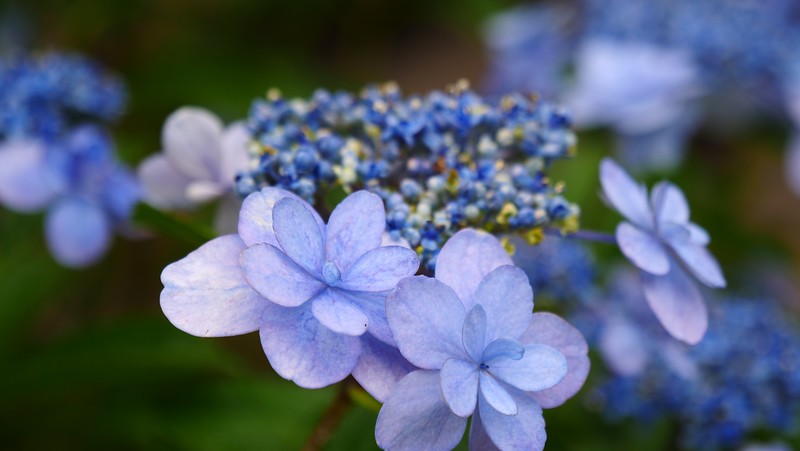 The highlight was visiting the Benzaiten Grotto, which is a small cave network dedicated to Benzaiten, the sea goddess and the only female to form part of the Seven Lucky Gods in Japanese mythology.

The walls had carvings of the goddess as well as small statues lit by candles and placed in niches.

Visiting the cave is pretty easy as there’s a clear path to follow, just be aware that there will be some water dripping down from the walls and ceiling, and that you’ll also need to hunch over to get through the tunnel.

For more ideas of things to do in Kamakura, here’s a list of temples, shrines and historical sites to visit. There’s enough in Kamakura to keep you busy for a few days if you have the time!

Aside from its temples and shrines, Kamakura is also a bit of a foodie destination with lots of street food on offer. In between all the sightseeing, we made time to walk the length of Komachi Street, which is a long pedestrian lane lined with small boutiques, souvenir shops and food vendors.

All you have to do to find this place is take the east exit from the main train station and look for the red torii which marks the start of the shopping street.

Here’s a list of some of the Japanese foods we sampled along the way:

We ate lots of mochi during our trip to Japan, but this one was quite special! This plump mochi was stuffed with a sweet custard and topped with a perfect strawberry. It was delicious and a nice change from all the red bean mochis I had sampled up until then.

One food item that Kamakura is known for is whitebait (tiny white fish) that make appearances in both savoury and sweet desserts. Sam tried the omelette with whitebait, which he found pretty tasty. However, for the more adventurous eater, we noticed soft-serve ice cream topped with whitebait! That was a first.

Taiyaki is a fish-shaped pancake that is generally stuffed with red bean paste, sweet potato or custard. While the batter generally resembles that of a fluffy pancake or a waffle, what drew us to this one is that it was quite buttery and flaky, a bit like millefeuille. This one was stuffed with apples and cinnamon and tasted a bit like an apple pie.

We didn’t really know what we were having when we approached this particular food stand. “It’s like baby skin!” the shop owner told us as he jiggled a honey-coloured jelly, rolled it in roasted soybean flour and then placed it on a skewer. It turns out this was a dessert made from bracken starch – slightly different from mochi which is made from glutinous rice, but surprisingly tasty. 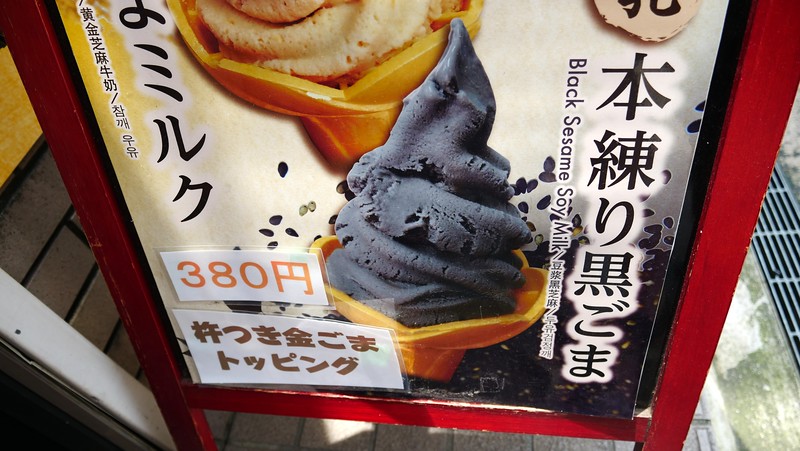 As we were walking down Komachi-dori, we came across a shop specializing in all things sesame. Since they were handing out free samples, we decided to walk in and have a look around the store and also sample their ice cream. We got a black sesame soy milk ice cream that was covered in roasted sesame. Sam thought it tasted a bit salty and nutty, but worth trying!

For a savoury street food snack, we decided to try the cheese korokke, which is basically the Japanese version of a croquette. It was a potato and cheese mash, coated in breadcrumbs and then deep-fried. The cheese was a nice addition.

And because we visited Kamakura in the middle of summer and were melting, we stopped for a second ice cream cone! This time, we went for the matcha and purple sweet potato. Out of all the soft-serve ice creams we had in Japan, the purple sweet potato had the mildest flavour, but it was very refreshing so no complaints there.

And that pretty much sums up our day trip to Kamakura.

I would have liked to spend even longer in the city to visit a few more temples and even make it down to the beach, but as I mentioned, we were visiting in the middle of summer and it was so hot and humid that by mid-afternoon, we called it quits and returned to our air-conditioned apartment – whewww!

I bet if we’d visited in spring or autumn, we would have been able to cram a bit more into our day trip, but nevertheless, it was a nice visit.

I’ll now leave you guys with a video of our day trip to Kamakura:

Have you been to Kamakura on a day trip?
Which attractions did you visit?